MotionLite Illuminates Your Wheels for Everyone to See at Night 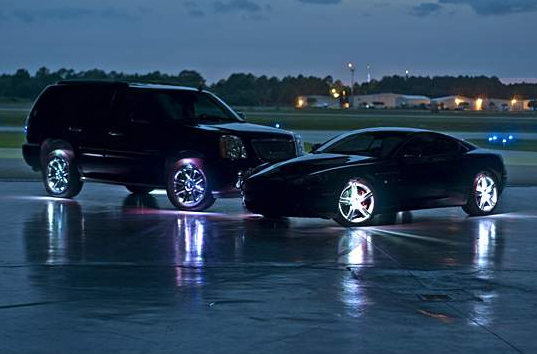 Do you remember the old automotive fads where people had neon lights under their car? What about those light-up washer nozzles? Gosh, what in the world were those people thinking? Anyway, there is a new lighting accessory that is soon to catch on called MotionLite. MotionLite is a new product that utilizes retractable LED lighting pointed at the face of your wheels. The MotionLite applications can be configured to change colors and have a strobe effect making your wheels BLING at night. It is claimed as “the world’s first tractable wheel illumination system”.

The first applications that we have witnessed so far have been from Will Castro (owner of Unique AutoSports), Tanner Foust (Rally, Drift, X-Games Champion) and Neil Tjin (Aftermarket design for Honda, Chevy and Ford).

“LED lighting is the next wave of car customization and MotionLite is a new lighting system that does what no other lighting product has done before, lights wheels from the outside,” says Will Castro, owner of Unique Autosports. “It’s an exciting product that we see many applications for in the aftermarket industry. I am proud to be using the MotionLite product.”

I wonder if law enforcement will crack down on this before it ever gets too “popular”? Maybe I can hook up my stereo to the lights and play a little B.o.B. while rolling down the street! Ahh NO!