Mitsubishi Joins The Electric Car Party In The U.S. 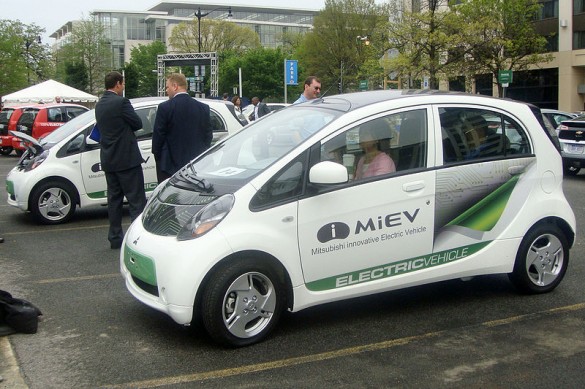 A Mitsubishi i test drive in Washington, DC. Image: Mariordo

Mitsubishi has been been selling their i MiEv (for Mitsubishi innovative Electric Vehicle) in Japan since July of 2009, and in 2010 the oddly-styled urban commuter went on sale in Hong Kong, Australia and Germany. The United Kingdom joined the distribution network in January of 2011, and the U.S. is slated to get the car (called the Mitsubishi i on these shores) around the beginning of 2012. Like the Nissan Leaf, the Mitsubishi i will be powered by batteries and an electric motor only; unlike the Leaf, it will have a range of less than 100 miles under ideal conditions. In fact, current projected range is said to be 75 miles based on U.S testing standards. Where will the Mitsubishi i shine against the Leaf? In pricing, for one.

The Mitsubishi i will start at $27,990 for the base model, excluding the $7,500 federal tax credit. By comparison, the Leaf starts at $33,630, nearly $6,000 higher for a vehicle with similar capabilities. The Mitsubishi i will also come in an “SE” model, including such amenities as a 360-watt, eight speaker audio system, 15” alloy wheels, fog lamps and a leather wrapped steering wheel. If you want more, SE models can be ordered with a Premium package that includes a nav system, rearview camera, heated outside mirrors and a FUSE hands-free infotainment system. Even loaded up, the Mitsubishi i stickers at $32,780, which is still below the price of an entry-level Nissan Leaf.

Mitsubishi has announced a four-step process for ordering their EV in the United States. Prospective buyers must register with Mitsubishi (at i.mitsubishicars,com) to set up an account and spec out an i. Next, you cough up a PayPal deposit of $299 for the car and $99 for the mandatory home electrical inspection. Third, you schedule the home inspection to see if your current electrical service can handle charging the Mitsubishi i, and finally you wait to hear from a Mitsubishi rep who confirms your order and tells you when to expect delivery.

What’s your take on the Mitsubishi i? If you live in one of the markets where it’s currently being sold, have you driven one? Is it a challenger to the Leaf, or is it just a novelty that will disappear from the market when (or if) fuel prices stabilize?