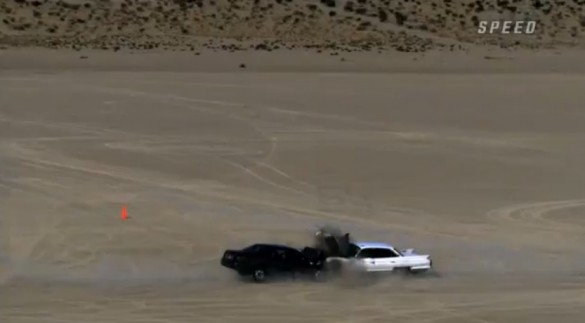 Americans tend to associate the size of vehicles with safety, which (partially) explains our love for big SUVs and pickup trucks. There is some logic behind this, since physics tells us a larger, heavier object will do more damage in an impact than a smaller and lighter one. Still, mass alone isn’t enough to keep occupants safe, as this video from Speed TV’s Stuntbusters illustrates rather well.

In 1962, automotive crash science was in its infancy. Most cars were years away from coming with seat belts, padded dashboards and collapsible steering columns as standard features, and things like crumple zones, high strength steel passenger compartments and airbags were the stuff of science fiction. When a crash occurred, the force of the impact was transmitted back into the vehicle, usually with devastating results to those inside.

As you watch the video, found on Autoblog, keep in mind that cars have gotten even safer in the decade since the 2002 Cadillac in the video was built. The ultimate goal of automakers is to eliminate crash fatalities, which may not be achievable as long as drivers shun seat belts and turn off features like stability control. If you spent any time on the highway over the Thanksgiving weekend, you know that the roads aren’t getting safer; lucky for us, then, that the cars driving on them are.