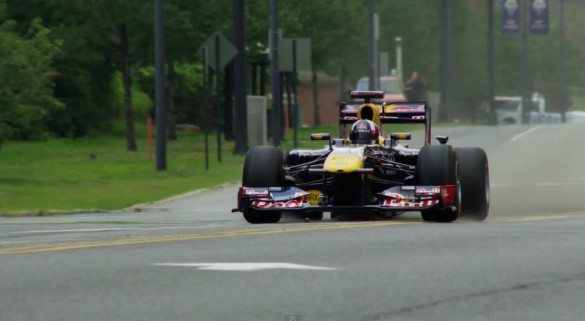 Running a Formula One car isn’t a one man job. Under the best of circumstances, it takes a team of mechanics, engineers, logistical specialists and a driver to get the car where it needs to be, running, and turning competitive lap times. While that’s difficult enough at a limited-access motor racing circuit, the challenge goes up exponentially on an exhibition run through the streets of a city.

In addition to the obvious dangers, like errant pedestrians walking in front of a Formula One car traveling at triple-digit speeds, there are problems that most of us wouldn’t even think about. Manhole covers, for example, need to be tack welded in place, as Formula One cars create enough negative pressure underneath to lift these steel plates into the air. Then there’s the issue of dirt and debris in the (very expensive) engine, since F1 cars don’t run with air filters.

For Red Bull, these risks are manageable when viewed in light of the opportunity to bring a taste of Grand Prix racing to U.S. fans. If it’s to succeed on U.S. soil this time, it will be because of the enthusiasm of American Formula One fans, something that’s proven lacking in past attempts.

As for us, we’d have paid good money to stand at the railing in the Lincoln Tunnel as David Coulthard whistled by in the Red Bull RB7. We can only imagine what that must have sounded like, and we’ll bet that those present in the tunnel still have ringing in their ears.