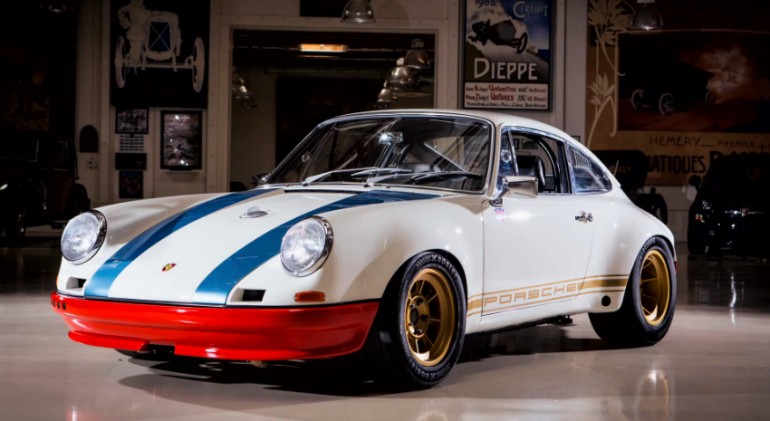 If you’re a regular reader, you know we’re big fans of Urban Outlaw and Porsche artist Magnus Walker. We’ve previously brought you segments on his business (the Urban Outlaw documentary) and on his 1971 Porsche 911 (via another episode of Jay Leno’s Garage). Walker is back for another visit at the Big Dog Garage, and this time he’s brought his 1972 Porsche 911 72STR 002.

“But there’s no such animal,” Porschephiles are likely to protest, missing the point entirely. Walker doesn’t build concour-quality restorations; instead, he describes his handiwork as “sport-purpose” and “hot rod inspired.” That’s no period-correct 2.4-liter flat-six tucked in the car’s engine bay; instead, it’s a much more modern de-stroked 3.2-liter engine. The hood is louvered, hot rod style, because it aids with cooling and because it looks good, too.

Walker has his own signature design traits, too. The fuel filler is relocated to the center of the hood, race car style, while both front and rear turn signals are integrated into the bodywork. The door handles, drilled for (modest) weight savings and a trick look, come from an earlier, short-wheelbase 911, as do the window cranks, chrome-trimmed gauges and chrome rear view mirror.

Inside, function outweighs form. Aftermarket supplier Rennline supplies bits like the drilled floorboards and shifter, while the shift knob is made from unpolished wood (a nod to the shift knobs used in the Porsche 917). Racing bucket seats and six-point harnesses may be short on comfort, but they’re long on support needed for track days and autocross. Walker even has a removable bolt-in roll cage, which can be removed to add space and shave pounds.

Light weight is the key to performance here. With ten gallons of gas in the tank, Walker says the car weighs in at just 2,200 pounds, which makes the 3.2-liter engine’s output of 275 horsepower seem like more than enough. It sounds great under throttle too, so we fully understand why the car lacks an audio system (aside from the weight savings).

Walker’s customization (including the three-color paint scheme) isn’t for everyone, but we completely understand the appeal of a Porsche resto-rod. In fact, we can see one parked in our own garage, since we’re of the simpler-is-better school when it comes to sports cars.