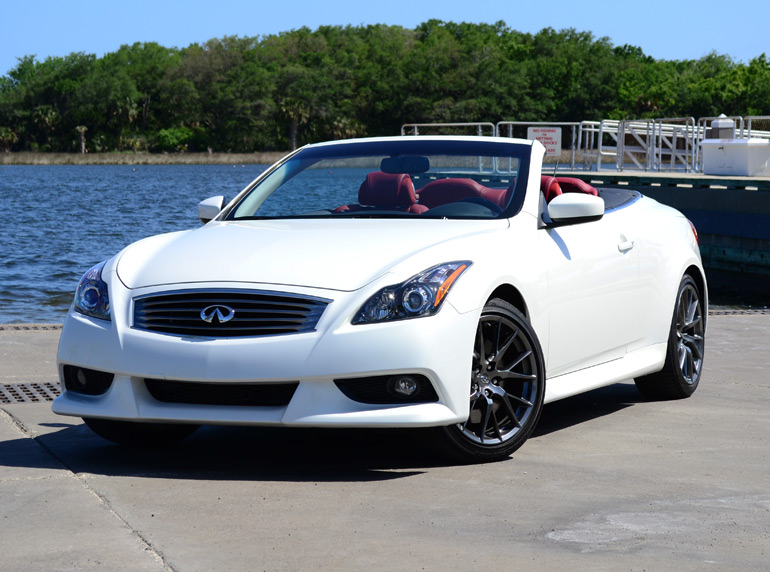 The new 2013 Infiniti G37 IPL (Infiniti Performance Line) Convertible is yet another mark in the brand’s exclusive performance line adding more power, sports exhaust and sport-tuned suspension wrapped up in a sportier physique. In convertible form, exclusive to the 2013 model year, the new 2013 G37 IPL exudes all that its well-perceived G37 IPL coupe embodies with the added benefit of a power-folding hardtop.

The new 2013 Infiniti G37 IPL Convertible is a remarkable drop-top cruiser giving you a taste of the meshed worlds of a luxury coupe and convertible with a dash of extra performance over what the normal G37 Convertible offers. 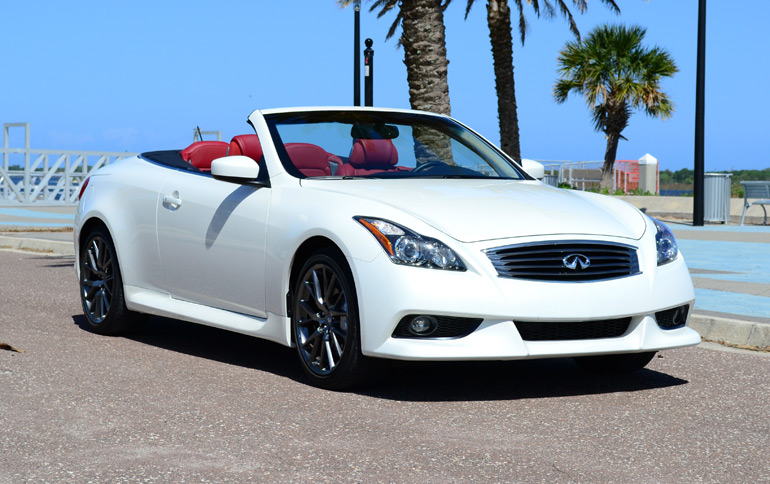 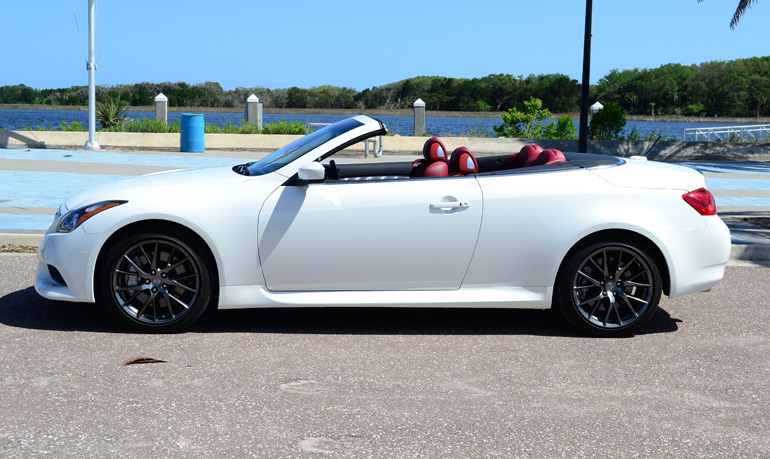 For the G IPL to truly be a contender among its performance-oriented competition, additional power and other performance attributes will require more of a separation from the normal variation of the G37. However, as a continual start to a performance line for Infiniti, the G37 IPL is not a bad initiator for more enthusiast oriented vehicles, especially by offering a hardtop Convertible flavor starting this model year (2013). 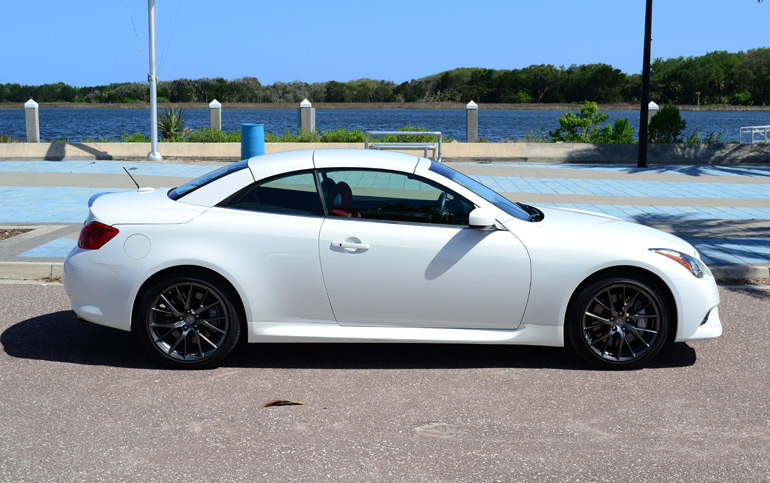 The added power on the G37 IPL Convertible is a welcomed trait, as the convertible tends to carry extra weight for the power-folding aluminum hardtop. Though, the G37 IPL features a sport-tuned exhaust, the deep baritone drone sound emits expectantly into the cabin even with the top up. The drone sound can be annoying when driving below 60 mph at times but only present when cruising in a higher gear. Fortunately, the drone sound disperses as you approach interstate speeds around 65 mph and above. 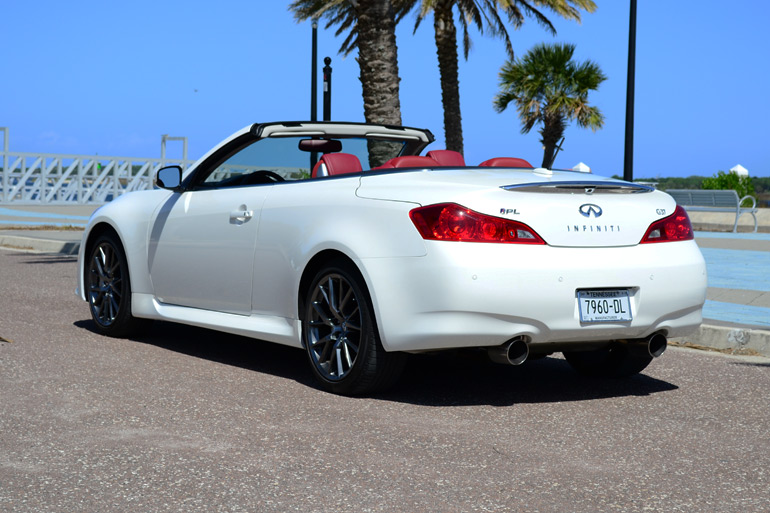 The sporty aptitude and handling of the G37 IPL coupe is somewhat lost in translation due to the extra weight of the G37 IPL Convertible. Additionally, it suffers from extra vibrations from unwanted body-flex with the top up or down, mainly due to the structural integrity degradation of the Convertible design. Nevertheless, the new G37 IPL Convertible proves to add road-handling stability and an extra bit of oomph over any normal variation of a new G37 Convertible without the IPL badge. Power is sufficient and smooth thanks to well-engineered VQ-series V6 engine and the adaptation of the 7-speed automatic transmission it is mated to. The new G37 IPL Convertible is only offered with the 7-speed automatic, while the G IPL Coupe has the option of saving $1,900 for the standard 6-speed manual transmission.

The 7-speed shifts fast in sport mode but becomes somewhat indecisive when in normal Drive. Sport mode for the transmission or utilizing the standard steering wheel column mounted Magnesium shift paddles is more of an enjoyable experience for light-hearted enthusiasts. 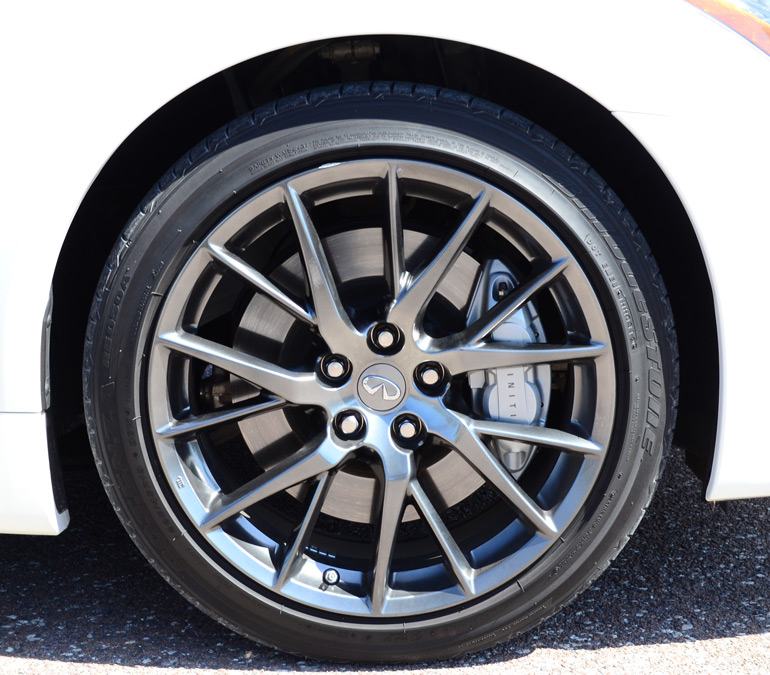 The exterior styling of the new 2013 Infiniti G37 IPL Convertible has a certain classiness about it. The Convertible G37 already distinguishes itself from the IPL Coupe by means of a slightly different shaped roofline, elongated trunk area and a touch of additional chrome accents on the rear deck lid.

The new 2013 G37 IPL Convertible gets the IPL’s characteristic darkened 19-inch wheels wrapped up in a staggered set of 225/45R19 front and 245/40R19 rear summer-performance tires. Along with the wheels and the 4-piston front, 2-pistion rear brake calipers and 14-inch front rotors, 13.8 inch rear rotors, the IPL is essentially a package using virtually the same parts as a G37 with the sport package, with the exception of a firmer suspension, better flowing exhaust and added engine power. 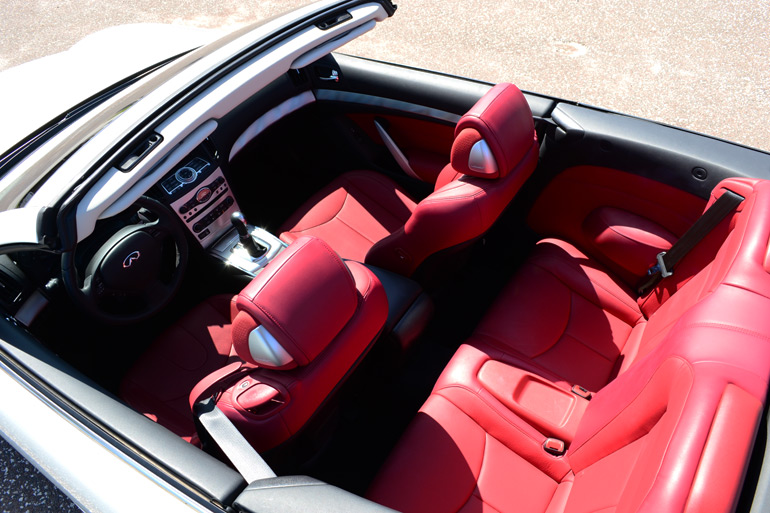 Inside of the new 2013 Infiniti G37 IPL Convertible is an interior virtually identical to any other G37 with Journey or Sport packages. Setting the G37 IPL Convertible apart from normal G37s are the exclusive perforated leather seats with accent stitching, dependent on the color choice. In my test vehicle the seats were a pleasing aesthetic to the interior by means of the nicely contrasted white exterior next to the Monaco red leather seats. Moving towards the dashboard places you in an environment without anything unique to the G37 being equipped with the IPL package, unfortunately.

The new 2013 Infiniti G37 IPL Convertible holds its own and some when pitted against vehicles like the new Lexus IS Convertible. As far as value, the G37 IPL is somewhat of a mysteriously high-priced luxury item as it tips the scale just above $62,415 including $895 destination charge for the as-tested price of my test vehicle. The G37 IPL Convertible starts at $61,450, getting you just about every option offered on the G37 equipped with the Sport package, including the hard-drive based GPS navigation system fed through the familiar 7-inch touch-screen. Other highlighted options included on the IPL are intelligent key, Bluetooth connectivity (phone and audio streaming), 13-speaker Bose audio system, climate controlled seats (ventilation cooling and heated) and a 12-way power driver’s seat.

In conclusion, the new 2013 Infiniti G37 IPL Convertible is a prized luxury convertible cruiser, with a few characteristics of a roadster’s ability to own the road and open sky.