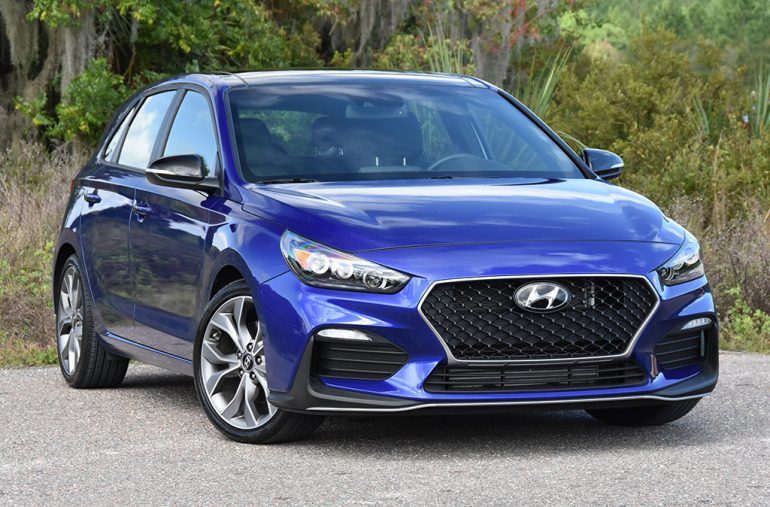 Let’s face it; it’s difficult to find a new mainstream vehicle that puts the smile on the face of an automotive enthusiast without paying a lot of money. Fortunately, Hyundai has stepped up to the plate to give enthusiasts something to enjoy without sacrificing the larger portion of your paycheck with new vehicles like the Veloster N, and now the unsuspecting Elantra GT N Line. Over the past week in driving the new Hyundai Elantra GT N Line, I was caught off guard in finding out how much fun such a unique and rare vehicle could be.

>> Get the best price on the Hyundai Elantra GT from a network of local dealers now. <<

Hyundai has a strong enthusiast base, but most of them reside on the side of clamoring to older Hyundai vehicles as the brand no longer makes the Genesis Coupe, thought to be one of the most successful enthusiast-oriented vehicles from the brand. Now, the Veloster has taken the crown to appease enthusiasts along with the unlikely counterpart, the Elantra. 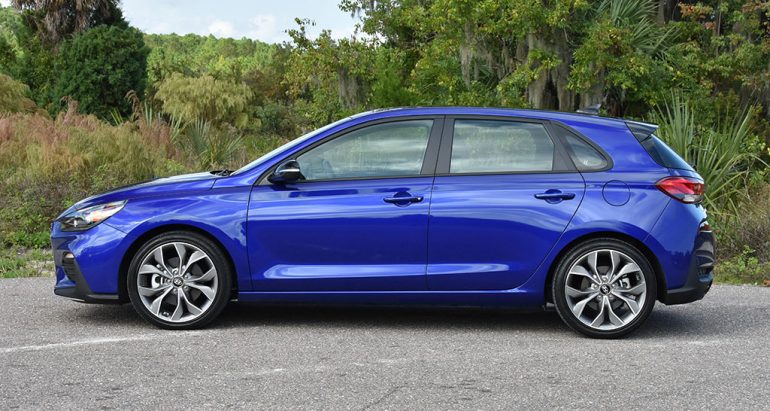 The new Hyundai Elantra isn’t thought to initially be a performance component, but more as an economical form of transportation with good reliability, build quality, a suite of advanced safety features, and a remarkable factory warranty. Outside of all of the “expected” characteristics of the Elantra lies the Elantra GT N Line, which utilizes the brand’s 201-horsepower and 195 lb-ft of torque turbocharged 4-cylinder engine. Such an engine is also found in the Elantra Sport Manual that I had a chance to review months ago – also surprising me with its fun-character and enthusiast appeasing performance. While 200 horsepower is nothing to jump up and down about, it does well in the Elantra GT, which is a hatchback form of the formidable compact sedan that many non-enthusiasts have adorned for many years. 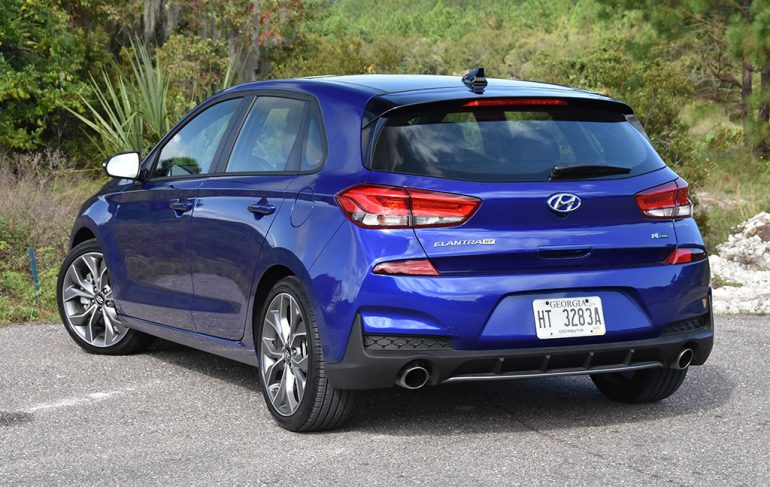 Offered in just two primary trims, the Elantra GT is best served to those who want a bit of extra excitement in their life in the N Line trim, which features the 201-horsepower 1.6-liter turbocharged engine in place of the base Elantra GT’s 158-horsepower naturally aspirated 4-cylinder engine. Best of all, the Elantra GT N Line is offered with a 6-speed manual transmission or a 7-speed automated dual-clutch unit as found in my test vehicle. Any vehicle that offers a manual transmission these days is deserving of merit in my book, as it is in the hearts of countless enthusiasts. 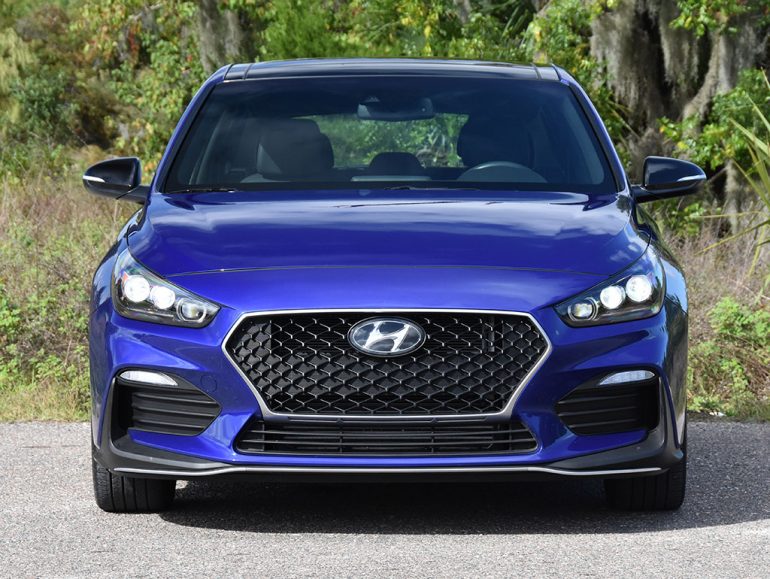 Having had many test vehicles that carry price tags close to the six-figure mark, it’s refreshing to get something in that is just under $30K yet still offers some excitement but retains its practicality and versatility that you can only find in a hatchback. The Hyundai Elantra GT has already been a well-perceived package that has a simplicity to it that is shaped by tech that just works in a well-to-do 7-inch infotainment touchscreen as well as a SmartSense suite of safety features. The N-Line trim of the Elantra GT may not be for everyone as it has a firm ride quality that can be a bit bouncy at times, but it does well to be just comfortable enough for trips in the sporty seats that are attractively accented with red stitching. 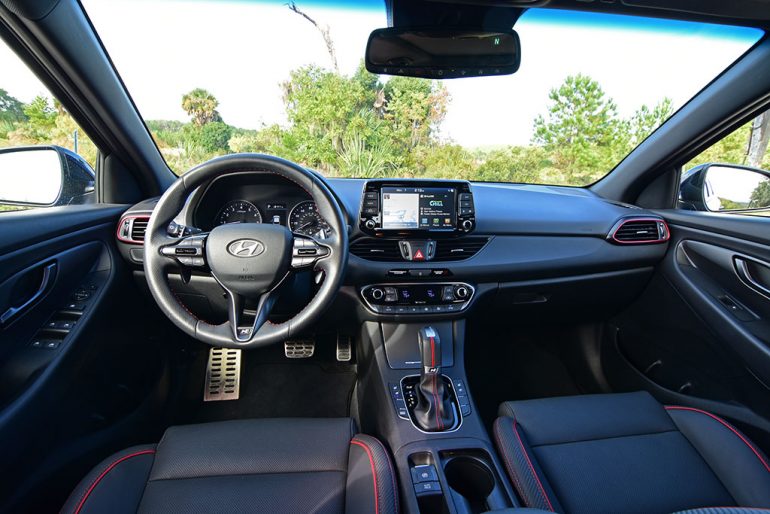 Fuel economy in the Elantra GT N Line isn’t as good as its base trim as you’re working with more power in the N Line. You’ll expect to match the EPA estimates of 25 mpg city, 32 mpg highway, and 28 mpg combined. With that, you’ll be able to reach 60 mph in about 6.3 seconds, which is respectable for a vehicle at such a price point running past most of its competition. Of course, constantly listening to the noticeable exhaust note during heavy throttle inputs, which may be a bit too much for some, the fuel economy starts to decline quickly falling a couple of mpgs short of the 25 mpg city figure. 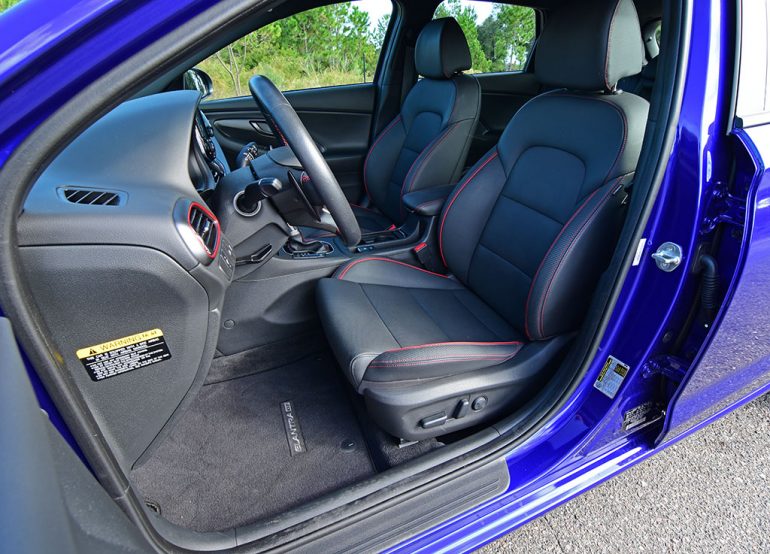 The new Hyundai Elantra GT N Line, a new trim offering for the 2019 model year, is fundamentally a sport version of the Elantra hatchback that nearly matches its Sport sedan sibling. The N Line naming comes from the Veloster N, setting a new precedent for the brand’s performance line. The differences in the N Line over the normal Elantra GT start with some exterior changes, such as a full array of exterior LED lighting with darkened housings, and special N Line front and rear fascia. Additional changes in the Elantra GT inside out and come from the optional tech package on my test vehicle featuring items such as a huge panoramic sunroof with a power sunshade, 8-inch navigation infotainment unit, ventilated front seats added to the standard heating, wireless smartphone charging pad, power driver’s seat, smart cruise control with stop & go, high beam assist, and blue link telematics connectivity. 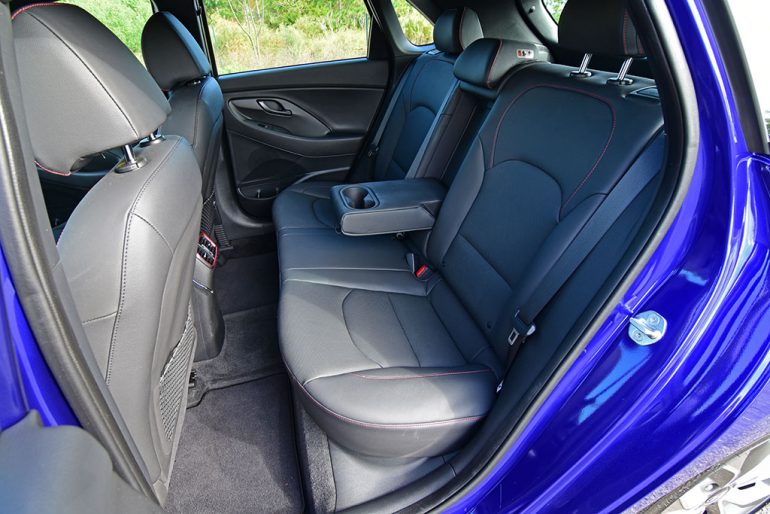 The new Elantra GT N line can be a welcoming form of transportation for many. Though, it forms more to the mold of lighthearted enthusiasts who want a little something extra in their day to day transportation. Even so, I’m willing to call the new Hyundai Elantra GT N Line something that competes with the likings of the Volkswagen GTI, setting a new quest to seek those same buyers. Yes, it’s just that good. The only downfalls I found in the new Elantra GT N Line was the initial engagement of its dual-clutch automated transmission. For the most part, shifts come on very snappy and direct, as they should acting mostly like any traditional automatic transmission should. However, when initially accelerating or attempting to creep along in crawling traffic, the transmission has some uneasiness in the engagement of its automated clutch. In some ways, the transmission could use some refinement, but it can easily be overlooked when your hooning around town – you’ll think you’re driving a vehicle that has a bit more power than on paper along with surprising handling attributes. 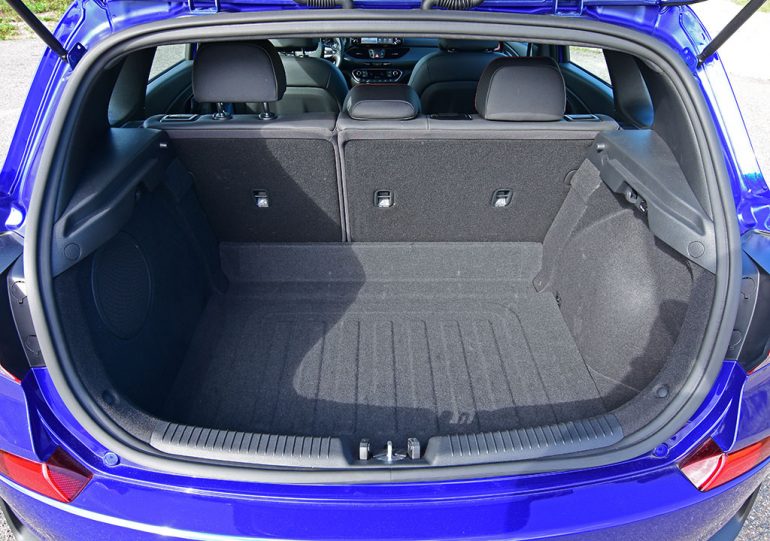 I’m impressed, Hyundai. Especially for the price of being loaded up and out the door at $29,305 – this vehicle, in its rare and overlooked form, should be on the shortlist of shopped compact cars for those who like vehicles like the VW GTI, Honda Civic Sport, or even the Mazda 3 hatchback.

>> Get the best price on the Hyundai Elantra GT from a network of local dealers now. <<