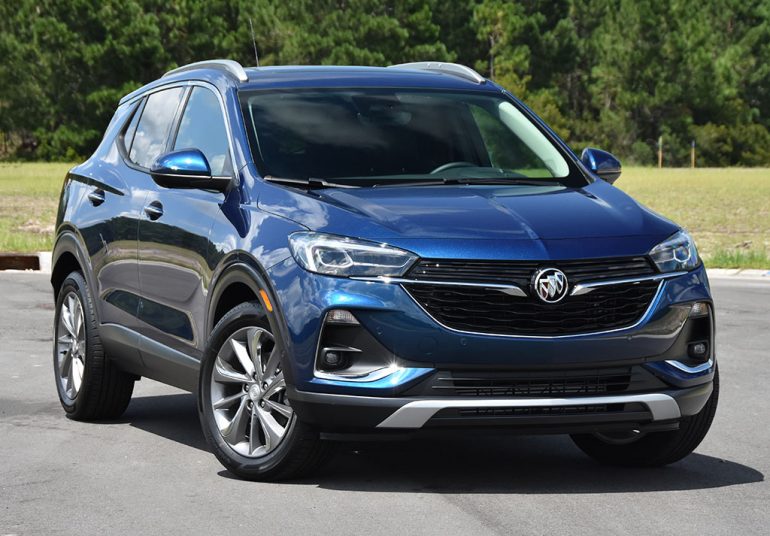 Crossover utility vehicles continue to be the go-to for modes of transportation in America, and manufacturers are taking advantage of such a growing market even in the scheme of compact crossovers, such as in the case of the all-new 2020 Buick Encore GX.

The new Buick Encore GX marks a new entrant within the lineup of premium crossovers. Despite its name, the Encore GX shouldn’t be confused with the current Buick Encore – the Encore GX is a bigger vehicle. Fundamentally, the Encore GX’s name is one of the very few similarities between the two vehicles. The Encore GX is not only larger but utilizes different drivetrains, which takes a totally different approach that we haven’t seen in using a 3-cylinder engine. That’s right, the new Buick Encore GX has a choice of two 3-cylinder turbocharged engines, the base version being a 137 horsepower and 162 lb-ft of torque 1.2-liter turbo 3-cylinder mated to a Continuously Variable Transmission (CVT), or a more powerful 155 horsepower and 174 lb-ft of torque 1.3-liter turbo 3-cylinder that also gets a CVT but only for the front-wheel-drive configured Encore GX. If you opt for all-wheel-drive, the 1.3-liter gets paired with a 9-speed automatic transmission. 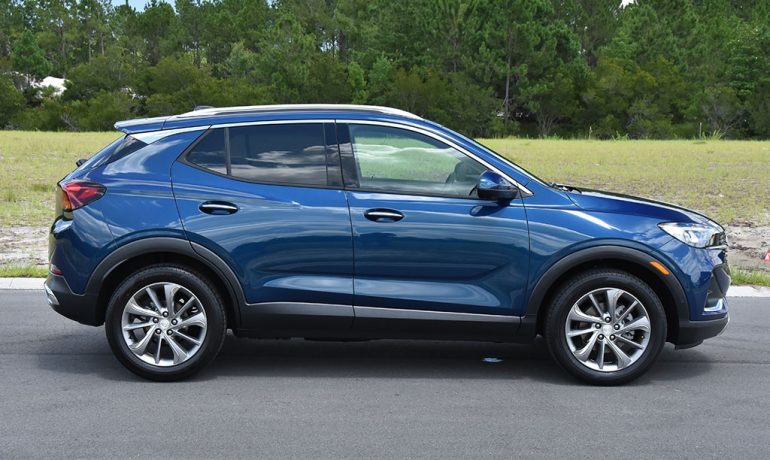 Having a full week in the new front-wheel-drive Buick Encore GX with the 1.3-liter engine and CVT transmission, I am actually a little surprised in how it drives and the amount of premium equipment loaded up on my top-level Essence trim test vehicle. Having every single available option equipped on my test vehicle, with the exception of all-wheel-drive, helps my belief of how well the Encore GX with the more powerful engine will easily slide into a growing segment of compact crossovers. 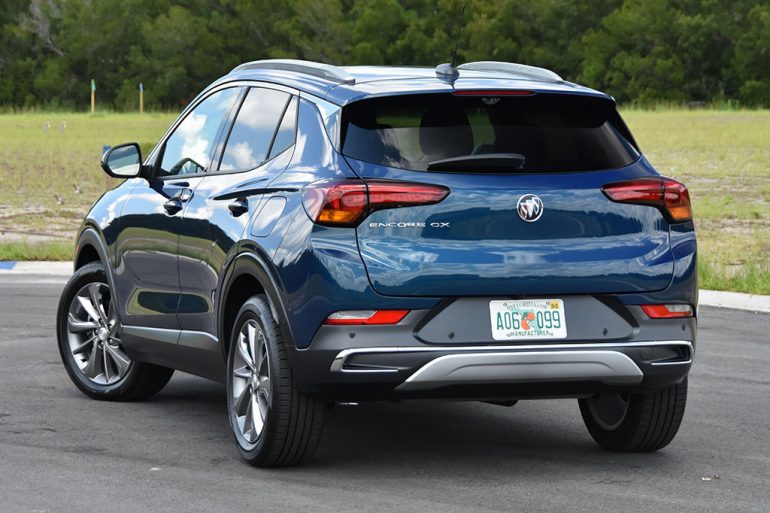 The driving characteristic of the Encore GX is somewhat unique. There isn’t much of a sound from the 3-cylinder turbo engine despite such a small displacement that you would otherwise think it needs to spin far into the RPM range to make usable power. I find that the engine has a nice low-end grunt to it that keeps the Encore GX on pace to have the confidence to overtake vehicles and keep the proper highway speeds without sacrificing safety. On that note, the engine and CVT actually work well together. I have had a long disdain for CVTs, but somehow the Encore GX’s CVT works well, to the point of mimicking a traditional automatic perfectly and hardly ever allowing the engine to hang onto a set RPM when aggressively accelerating. There must be plenty of sound insulation as well because the engine’s muffled note is mostly kept in check. While 60 mph may not arrive as fast as I would like from a standstill, taking almost 9 seconds in my tests, there’s still a good bit of power to emulate a good feeling for those who attempt to obey road laws. Mostly, the Encore GX drives GREAT, with things considered on paper for the raw stats of a rare 3-cylinder-powered vehicle. The only downside, other than the handling being a bit lackluster when you start to push the small crossover aggressively in turns, is the CVT’s ability to lock up the torque converter or lock in a single ratio. It does such quite often if you’re holding a constant speed or traveling at low speeds at a constant level, which causes a bit of unwanted vibration that’s noticeable to everyone in the vehicle, not just to the driver. 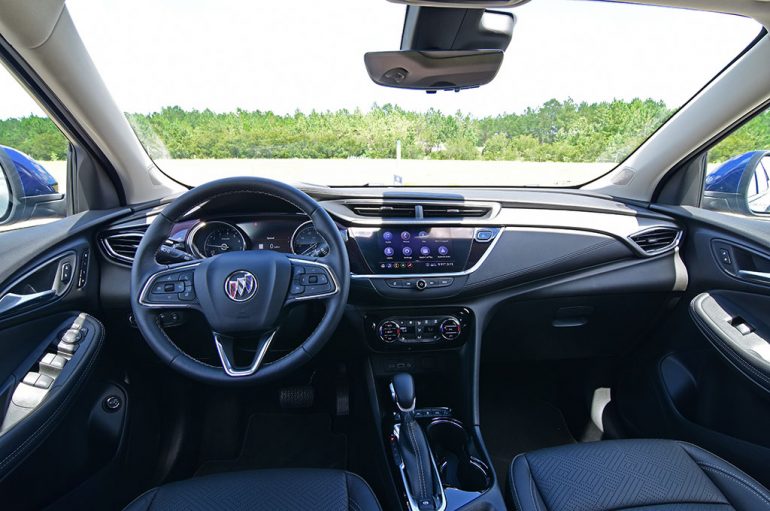 An area where the Encore GX also shocks is when it comes to fuel consumption in having a rather consistent EPA and real-world MPG figure. Such a figure comes to 30 mpg in the city, 32 mpg highway, and 31 mpg combined. Some will scratch their heads and wonder if those numbers are a typo but in my test, but I was actually able to beat them, which I think correlates to having a unique 3-cylinder turbocharged engine that sips fuel when it’s holding a steady speed or slowly accelerating. Some publications may list different numbers, but Buick sent me the latest print of my test vehicle’s equipment list and fuel economy numbers, and that’s where it lands. 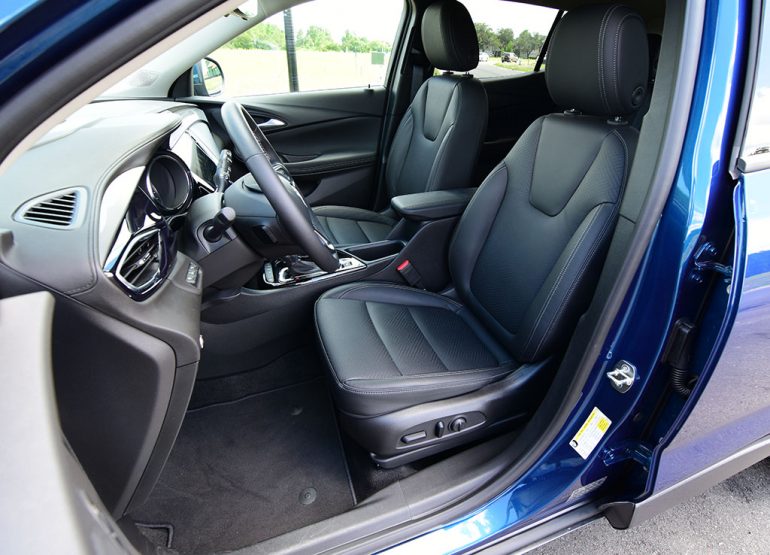 Buick has recently been known for having near-luxury vehicles that almost overshadow some Cadillac vehicles, which is GM’s definition-brand of luxury. The Encore GX does such with its interior if you overlook the monotone themed color palette of my test vehicle. Apart from that, there are several soft-touch surfaces, along with a plethora of high-tech features and luxury amenities. Some of the added equipment start with option packages that include a color heads-up display set on a self-contained motorized-pop-up panel on the dashboard, heated front seats and steering wheel, a 360-degree rearview/backup camera system, automatic dual climate controls, standard and USB-C ports in the front and for the back seats, the latest rear camera mirror system that displays a rearward unobstructed live image feed in the rearview mirror, and a packed set of active safety features (lane departure warning/lane keep assist, forward collision warning with emergency braking, blind-spot monitors, adaptive cruise control, pedestrian detection). Other notable features include rain-sending wipers, automatic LED headlights with auto highbeam, wireless phone charging, and Apple CarPlay and Android Auto integration. 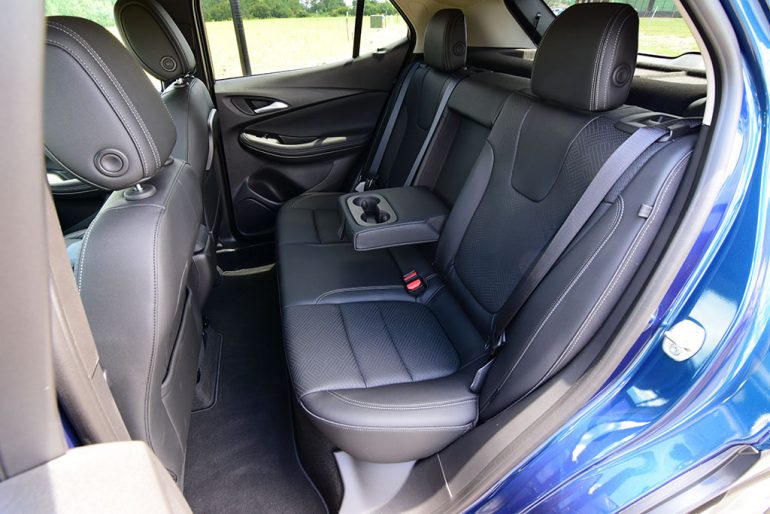 The 8-inch infotainment touch screen and system is much like those found on GM’s latest lineup with no big surprises other than having a straightforward and mostly user-friendly interface with the built-in navigation option. Most of the switchgear on the Encore GX is placed where you think it should be with a clear gauge cluster and small color information LCD screen in the center of the cluster. 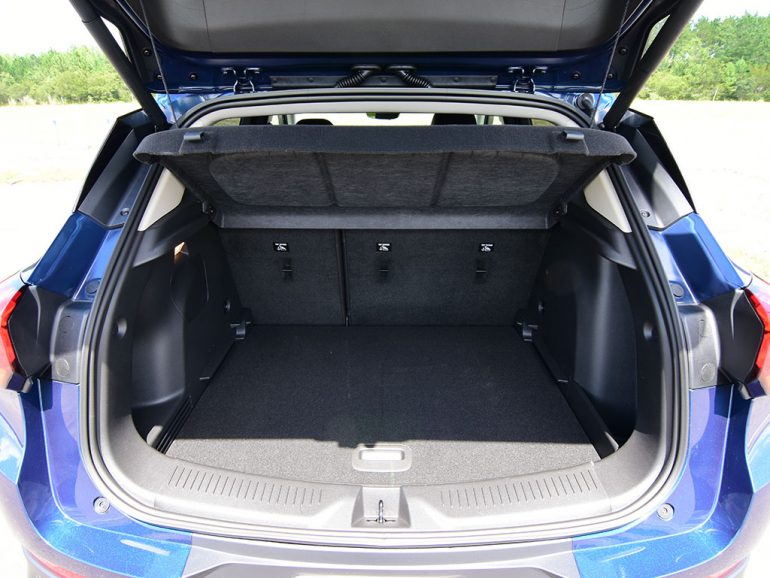 Seating areas are accommodating for the most part, but space is a little short if you ever take upon the challenge of packing in 5 adults – things may get a little tight. Otherwise, up front, the space is quite good, even with somewhat narrow seats. Cargo room is good and welcomed in its larger proportions over the normal Encore, which again, the Encore GX should not be confused with as its bigger in just about every dimension. 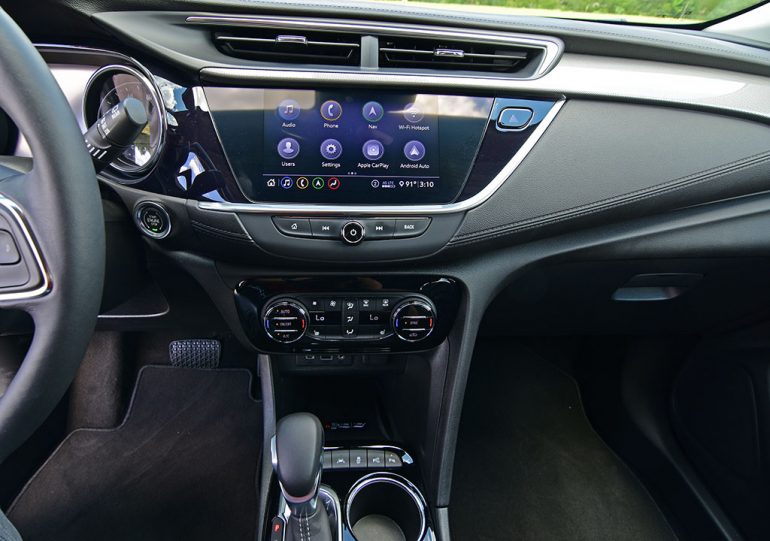 Buick has done a good thing in introducing the Encore GX. It has a decent ride quality and is mostly predictable in a good way, even if it has an enthusiast-hated CVT transmission and 3-cylinder engine. Pricing greatly undercuts luxury competition and falls in line with most mainstream competitors when you factor in the amount of equipment that can be had on the new Encore GX. Starting price is $25,095 for the base FWD Encore GX Preferred trim while my loaded-up Encore GX Essence test vehicle comes to $34,965, including a $995 destination charge.