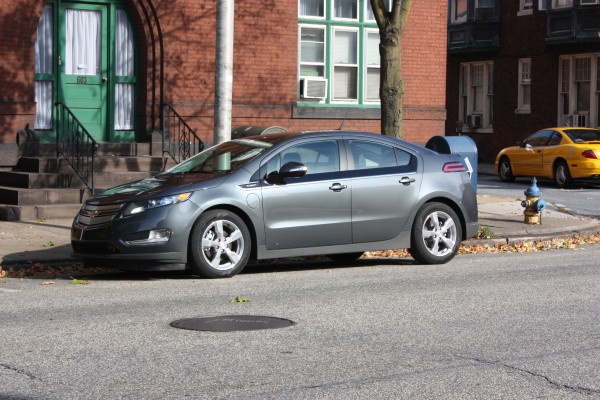 There appear to be two camps when it comes to the Chevy Volt; on the one hand, detractors cry, “it’s just another hybrid”, while discussing conspiracy theories about government subsidies for electric vehicles.  On the other hand, those who’ve driven it, myself included, come away pretty damn impressed.  How impressed?  Motor Trend just named the 2011 Chevy Volt the “Car of the Year”, and not two hours later Automobile magazine followed up with the “Automobile of the Year” award.  I’ll tell you flat out: the Chevy Volt is perhaps the most significant automobile of the past 50 years, and it’s the launching pad for a whole new generation of high-tech vehicles.  You can love it or you you can hate it, but you certainly can’t ignore it.

Before I tell you about my own experience driving a Volt from NYC to Detroit, here’s a little background on me.  I grew up as the son of a mechanic and garage owner, and learned to spin wrenches at an early age.  I’ve got 10w40 in my veins, and I consider the hybrid and the CVT to be among the worst inventions of mankind.  Really, in my book both rank up there with bubonic plague and telemarketing, since they are diametrically opposed to everything that makes a car fun to drive.  Give me superior handling with reasonable horsepower and light weight, then let me row my own gears.  Don’t give me a power train that combines the worst of a low-power internal combustion engine with the inefficiencies of battery power, and don’t give me a transmission that thinks it’s smarter than I am but sounds like a slipping Powerglide.  When the decline of Western Civilization is said and done, history will mark the rise of the hybrid and CVT as the beginning of the end, I’m sure of it.

Biases aside, I was willing to give the Volt a fair shot at impressing me.  It is, after all, an extended range electric vehicle, a term that I find much more palatable than “serial hybrid”, which is how the Society of Automotive Engineers defines the Volt.  My trip began under less than ideal circumstances, since a breaker had tripped in the hotel parking garage overnight, leaving us with a battery range of just six miles.  Had we been driving an EV from the competition, we would have checked back into the hotel, then gone out drinking for the day.  As it was, we soldiered on through the wet streets of Manhattan, pelted by a wintry mix of rain, sleet and hail. 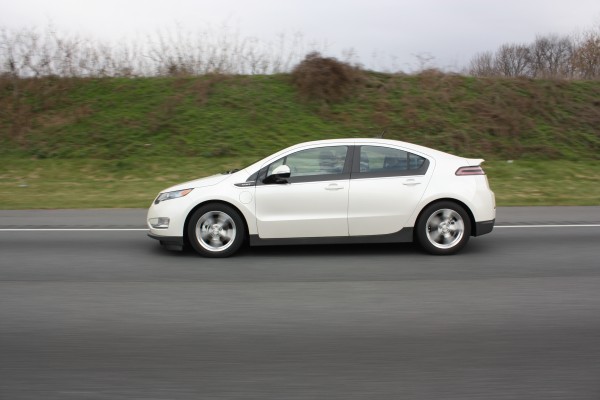 In traffic, the Volt takes some getting used to.  It’s utterly silent and vibration free until you step on the gas.  Do so, and you’re magically thrust forward (the maximum torque of an electric motor coming at zero RPM), accompanied only by the click of some relays and the hum of the motor.  Braking takes some getting used to, as the Volt uses both regenerative braking and conventional braking.  A light brake pedal effort slows the car, while slightly more effort seems to induce a negative-two-G panic stop.  You get used to it quick enough, but I don’t recommend taking your first Volt test drive with a cup of hot coffee in your hands.

The transition from battery power to gasoline generator power is seamless and transparent to the driver and occupants.  Tax the depleted batteries by climbing a pass or accelerating hard from a standing start, and the Volt’s 1.4 liter gasoline engine will rev to redline.  It’s OK, since it’s supposed to do this to generate sufficient power for the batteries and motors.  It’s an odd sensation to be at a partial throttle setting and hear the engine at redline, and I’m sure Chevy will get a few phone calls from customers concerned with slipping transmissions (relax, since the Volt really doesn’t have a transmission).  You won’t hear the motor unless it’s at full song, which means that the Volt’s normal soundtrack consists of wind noise and tire noise.  Even that is muted, thanks to the Volt’s slippery aerodynamics and low rolling resistance tires.  In fact, the most remarkable thing about the Volt is what you don’t FEEL; since there’s virtually no vibration from the drivetrain, even long days behind the wheel are relatively fatigue free.  I’d equate eight hours behind the wheel of a Volt to about five hours behind the wheel of a conventional car, and that’s no minor achievement.

I was prepared to like to Volt, but I was astonished at how much I wound up liking it.  It’s not a sport sedan, so get that idea out of your head.  With that clarified, the Volt will still run from zero to sixty in under 9 seconds, and will pull reasonably hard up to it’s mechanically limited top speed of 100 miles per hour.  On the road, it feels like a real car, not some science fair experiment, and that’s another major plus.  Steering is nicely weighted, and turn-in at reasonable speeds is crisp.  Push the Volt hard in a corner, and it reminds you that 3,800 pounds worth of motors, engines and electronics on skinny 215/55-17 tires won’t win you any SCCA Solo championships.  Understeer is the order of the day, but it’s easily controlled and I couldn’t get the platform to exhibit any quirky handling traits, though not for lack of trying.  The Volt is no BMW 3 Series, but it’s no worse than any other front drive family sedan on the market. 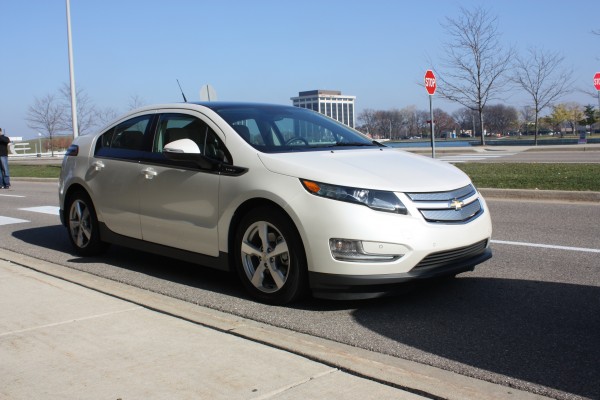 The Volt is a remarkably comfortable car for long distance travel.  The leather seats are supportive and even feature seat heaters, should you wish to tax the Volt’s battery-only range.  My co-driver was six foot four, and he had no problem getting comfortable as a driver or a passenger.  My five foot, ten inch frame fit just fine in the back seat, which is also all-day-long comfortable.  Drop the twin rear seats (the battery pack splits them and precludes a three passenger bench seat) and cargo room is ample, with a rear hatch allowing easy loading.  The Volt gives you the hauling ability of a small SUV or crossover, adding to its do-it-all versatility.

It’s not perfect, since there are a few things I’d change before taking the Volt to market.  The center stack is poorly designed, and contains controls for the nav, HVAC, audio system and information displays.  There’s no color coding, so figuring out which button controls which function is like learning to fly a 747 without instruction.  Worse, the buttons are touch sensitive; brush the wrong one and you lose the map, change the radio, reset the temperature or call up some obscure display showing the Volts “electrons per furlong” usage.  Another gripe was the interior graphics: unless you’re going for the Fisher Price set, squiggles and random geometric patterns do not make for a peaceful, relaxing cabin.  One of the Volts we drove had a fluorescent green interior, with a graphic pattern reminiscent of the microorganisms that cause dysentery.  I offered to fix this, at my own expense, but the GM engineers wouldn’t let me stop for a roll of masking tape and a rattle can of paint. 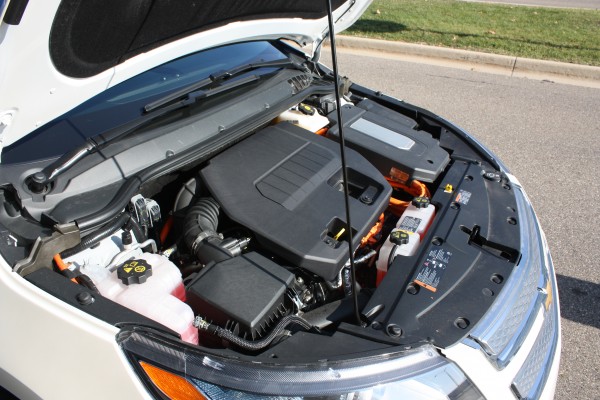 After two long days behind the wheel, that was the extent of my complaints, which makes the Volt a huge achievement in my book.  Our fuel economy of 38.8 mpg on batteries and gasoline-fired generator will only serve to give critics another rally point, but you’ve got to remember that we were auto journalists let loose on the highways of America.  It was our moral obligation to test things like acceleration, top speed and whether or not we could beat an Acura TL in a 70 to 85 mile per hour roll on. We did, but that’s beside the point.  The remarkable thing is that three adults drove a Volt some 700 miles in supreme comfort and reasonable style, stopping only for lunch, bio breaks and (occasionally) gas. Had we driven like normal, responsible adults (and had we started both days with fully charged batteries), I’m certain our fuel economy would have been better.

That the Volt is a supreme cross-country vehicle is vaguely ironic, since it was never designed for that purpose.  The Volt is a commuter car, designed to carry the 90% of American workers who live within 20 miles of their office to and from work on battery power alone.  Unlike other EVs, you can hop in a Volt and drive cross country tomorrow without stopping to recharge the batteries at 100 mile intervals, which makes the Volt the first practical electric car to come on the market.  I’d call that revolutionary, not just evolutionary as some critics have claimed. 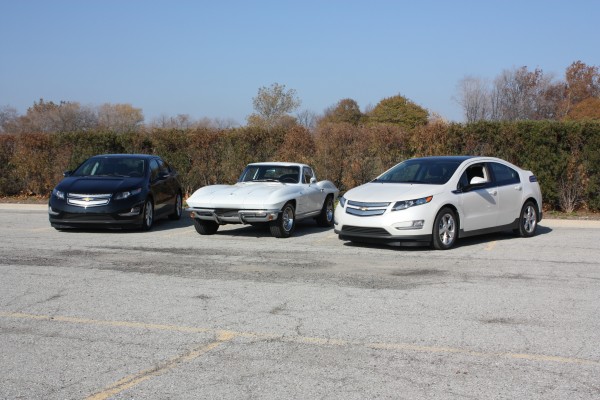 It’s not perfect, but it’s a damn good first attempt.  You need to drive one when you have a chance, because this is the start of a whole new breed of automobiles.  If the future is as promising as the Chevy Volt, there may be hope yet.