Chevy To Shut Down Volt Plant For Upgrades 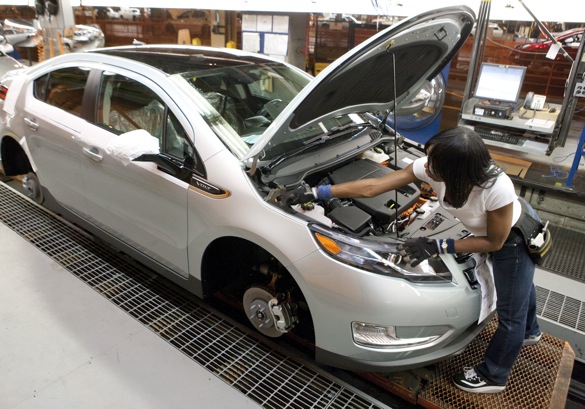 If you’re patiently waiting for dealer inventory of the 2011 Chevy Volt to build up before buying one, you may have to wait a little bit longer. Chevrolet has announced a four-week shutdown of their Detroit-Hamtramck plant, beginning in June, to ramp up for increased production of Chevy Volt and Opel Ampera models. The plant will receive new tools, updated equipment and an overhead conveyor system that’s expected to increase productivity. The Hamtramck plant is expected to have the capacity to produce 60,000 Volt and Ampera models in 2012, some 45,000 of which will be destined for the United States. The 2013 Chevy Malibu will also be produced in the plant, alongside the other GM models.

When production resumes, the plant will have the capability of producing 16,000 Volts in 2011, which will go a long way towards filling demand and providing dealerships with test units. Initially, the Volt was only offered for sale in California, New York, Connecticut, Maryland, Michigan, New Jersey, Texas, Virginia, and Washington, D.C.. By the end of 2011, however, the Volt will be available to consumers nationwide and the Opel Ampera will begin shipping to dealerships in the EU and China.

Since it’s launch in late 2010, Chevy has sold 2,029 Volts through April. That’s nearly double the amount of Nissan Leafs sold to date, but Nissan delivered more Leafs to customers last month than Chevy did Volts. Chevy insists that demand for the Volt remains high, and that the limiting factor has been production. We’ll know for sure once GM completes the update of the Hamtramck plant and Chevy reports on their August sales numbers.