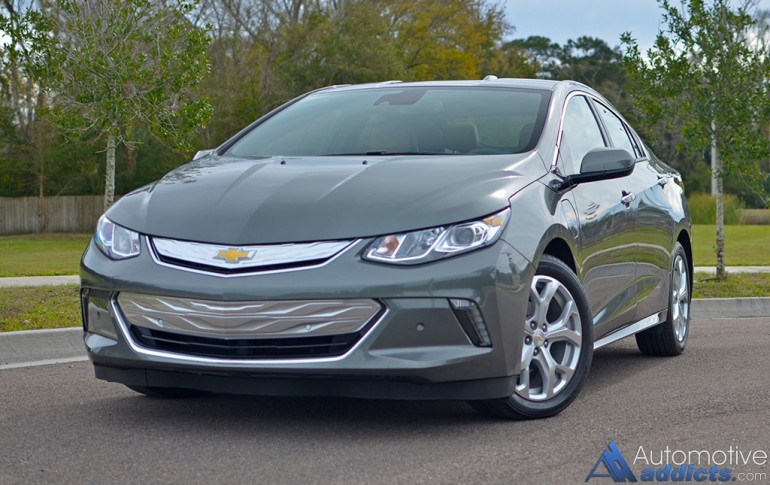 In the past few years, Chevrolet has proven their willingness to get deep into the electric-powered transportation game. The introduction of a redesigned hybrid electric Volt and the all-new fully-electric Bolt supports such a notion. In my latest test drive excursion, I dive into the 2016 Chevrolet Volt in its top-level Premier trim proving to be a much-improved variation over the last Volt.

>> Get the best price on the Chevrolet Volt from a network of local dealers now. <<

The Chevrolet Volt has always been a modern marvel as far as I am concerned. Even though Toyota pioneered the hybrid game here in America, Chevrolet has taken a less traveled path overcoming many bumps in the process when it comes to the Volt. As a redesigned model for 2016, the Volt improves upon just about every facet of its hybrid electric compact 4-door hatchback package. 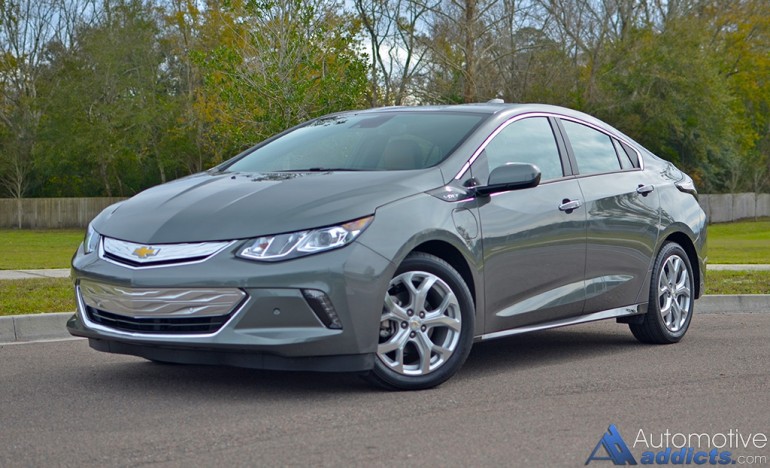 Taking the collective parts of the last generation Volt and brushing them up with a higher capacity lithium-ion battery pack, the Volt now gets an electric range of 53 miles, which about a 25% improvement over the outgoing model. Power output from the updated electric drivetrain conjures up 149 horsepower and a healthy 294 pound-feet of torque. The twin-motor system is virtually seamless in its ease of drivability that, for all intents and purposes, operates just like any other gas-powered vehicle but with quite a bit of instant torque available from a dead stop. Combining the ample instant torque and a curb weight that is about 243 pounds lighter than the last model, the 2016 Volt is livelier on the road with better performance in every way possible. Zero to 60 mph comes in about 7.9 seconds in our tests, admirable for such a vehicle and much quicker than the Toyota Prius. 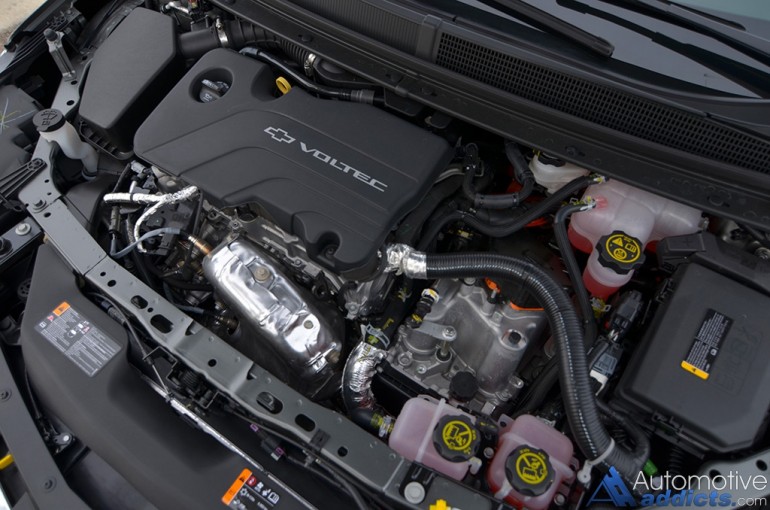 The new 2016 Volt’s powertrain features all-electric propulsion while there is a new 1.5-liter direct-injection 4-cylinder engine that serves duty as an electric generator, or range extender if you will. The engine kicks over only when it is needed, which is mostly consistent in running while the battery charge has been depleted and you are traveling at normal at highway speeds. In other cases of the engine operating to generate power for the electric motors is through the use of a clever Hold drive mode, which allows you to retain all charged and stored energy in the main battery pack for use at a later time. Fundamentally, you could have a reserved range of 53 miles while you use the gas engine to provide power to the electric motors, which will give you a highway range of about 367 miles. In total, the new 2016 Chevrolet Volt’s range with a fully charged battery and full tank of gas will yield about 420 miles. 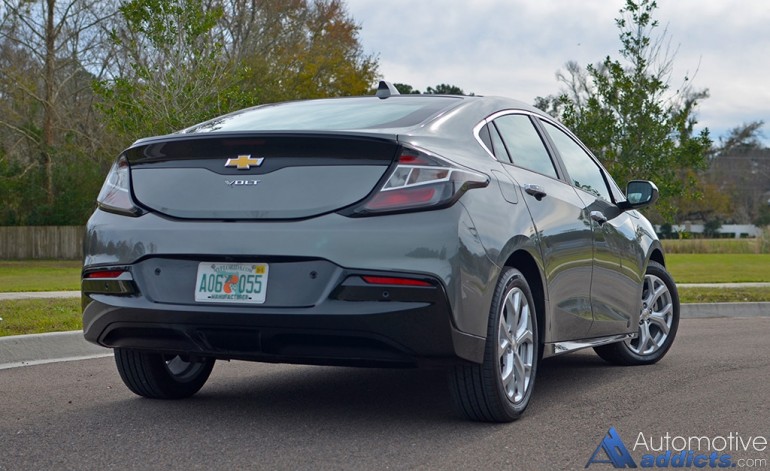 Putting the new 2016 Volt to the test, I was able to muster out about 48 miles of full-electric range on average driving as I normally would without use of the ingenious regen-on-demand feature by way of a steering wheel-mounted paddle. On my second attempt, with a fully-charged battery, it took nearly 14 hours in total to charge from full depletion on my 120-volt outlet (or 4 hour estimated full charge via 240-volt power source) where I later reached a total of 55 miles through seldom hypermiling and judicious use of the regen-on-demand feature. The 2016 Volt allows you to choose 8 amp or 12 amp charging through the charging settings menu, which cuts charge time down by about two hours (estimated 11 hours total), but your power 120-volt power source must support the extra load.

Some things to note about the regen-on-demand feature, it acts much like your braking only it decelerates on a more consistent and aggressive basis to get the maximum recharge possible from slowing while illuminating the brake lights at the same time. I found it very beneficial to use the regen-on-demand feature where it would sometimes temporarily retain my EV range much longer than expected, which with judicious hypermiling and minimal use of the power-sapping heater, it enabled me to muster out 55 miles on a single charge. 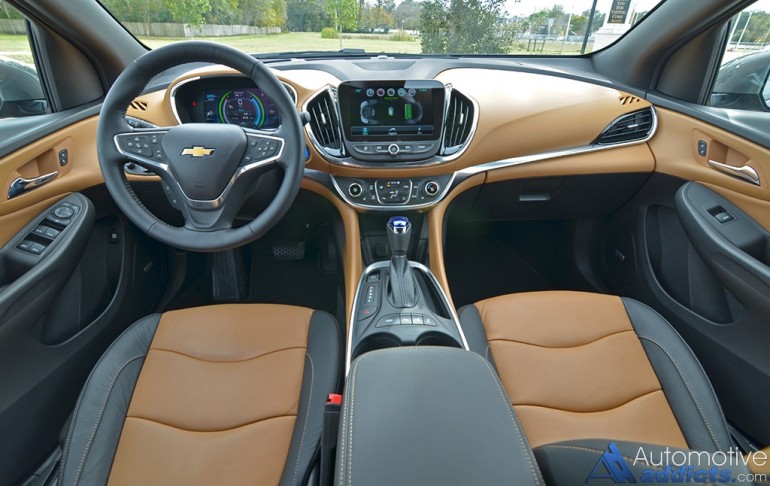 My overall fuel consumption through the use of either the Hold feature or driving with a fully depleted battery averaged around 41 mpg on the highway (combined 42 mpg EPA estimate). I was able to improve upon the figure getting about 46 mpg in city traffic where the range-extending gas engine would find times to turn off and allow the use of buffered energy storage it generated while running. Speaking of buffered energy, at times the Volt tended to hesitate when traveling at highway speeds when acceleration was immediately demanded. The engine buzzing along to provide charging power was more of a reactive case instead of proactive, which may have contributed to the slight hesitation of power delivery when the gas pedal was abruptly pressed traveling at a highway speeds. A crafty Mountain mode is one way of getting the Volt’s sophisticated control unit to take more of a proactive role in keeping a large enough reserve of energy in its temporary battery storage as well as any charged energy in the main battery. Such a mode takes into consideration how climbing inclines can heavily tax the battery as I found in many occasions going up some of our large local bridges. Sport mode livened up the throttle response and seemed to eliminate the slight hesitation felt at highway speeds. 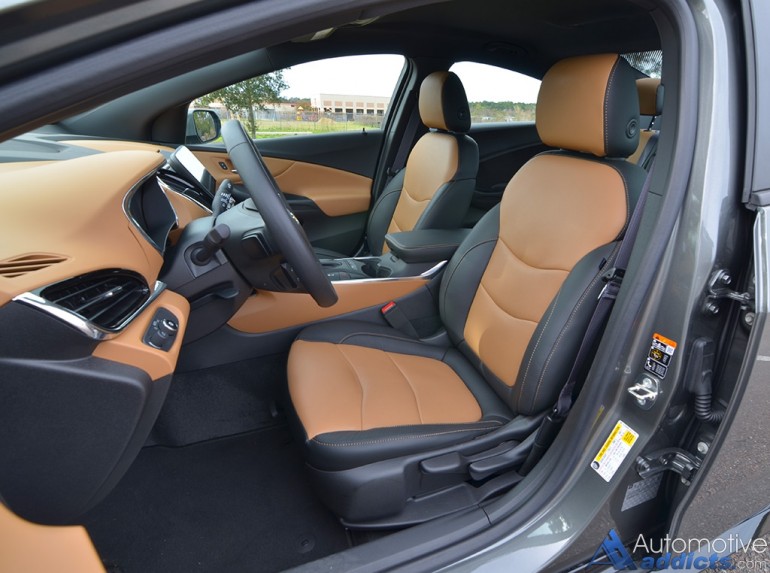 I found many traits of the outgoing Volt in a more refined form from its previous generation, which Chevrolet has provided by the way of giving consumers many things they asked from feedback in the last Volt. Some of those improvements can immediately be found in the cabin where you now have several physical buttons in place of the outgoing capacitive controls on the dashboard. Use of standard LED headlights comes as a no brainer as it utilizes less energy than the outgoing Volt’s halogen heat-and-energy-soakers. Additionally, there is seating for up to 5 passengers where the middle rear passenger is forced to straddle a center cupholder console residing atop of the T-shaped battery pack, quite the awkward spot. Nevertheless, the middle rear seat can be used in emergency situations or times where you are required to tote around that extra child. Though, I wouldn’t recommend a cross-country trip with anyone that you care about sitting in the center seat. 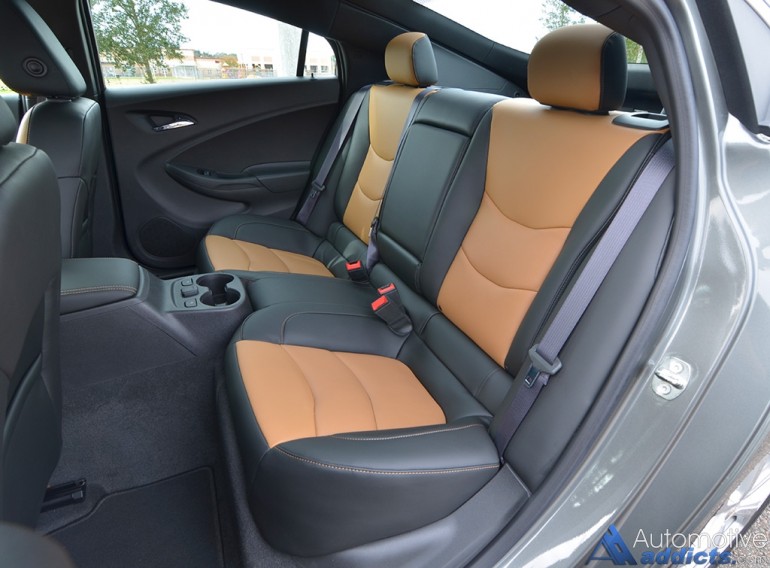 The rear opening hatch remains intact with a smallish cargo area only providing 10.6 cubic feet with the rear 60/40 split folding seat backs in their upright position. With the seat backs folded you have an airy 42.8 cubic feet to work with, still falling quite short of its competition, vehicles like the new 2016 Toyota Prius plug-in and Ford C-Max Energi. 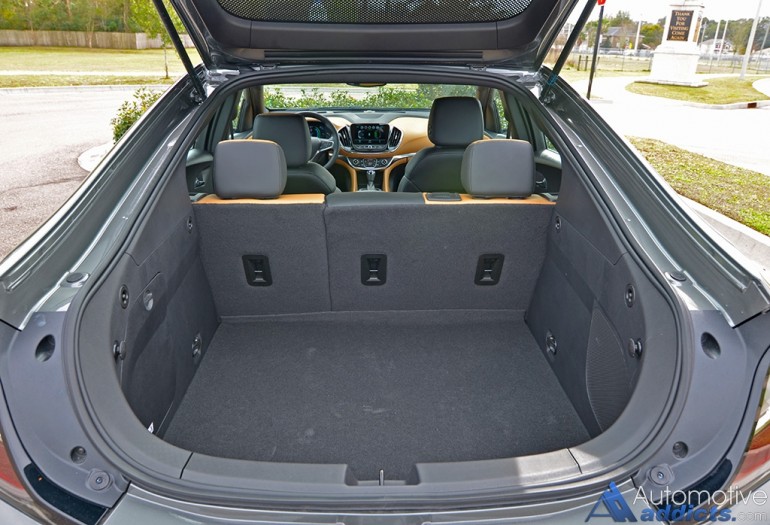 The overall appeal of the new 2016 Chevy Volt’s interior is excellent with its contrasting colors and perforated leather seating surfaces in my Premier-trimmed test vehicle. The front manually adjusted seats were a bit hard for my preference, which also lacked lumbar adjustment. There is no power seat adjustment option if you’re wondering. Also, part of my displeasure was the daunting task of finding a comfortable seating position. While I am just over 6 feet tall, the Volt didn’t do any justice for my long legs with the out of place and raised dead pedal and a rather narrow tunnel for the gas and brake paddle area.

Fortunately, the overall appeal of the interior made up for my lack of comfort shortcoming. The dashboard features an updated color LCD cluster with an abundance of pertinent vehicle information and the center stack has a large 8-inch touch screen that has quick response and simplistic menus and icons, just like other Chevy MyLink infotainment setups. Use of the integrated Apple CarPlay also proved to be another user friendly feature of the infotainment system nearly emulated much of your iPhone’s basic features. The dashboard is comprised of hard plastics. Though, Chevrolet pulls some trickery with the creative molding of the plastics, which all have a rubberized textured feel to them. The only truly soft touch areas are reserved to small areas on the door trim where your arm would rest, outside of the obvious leather seating surfaces. 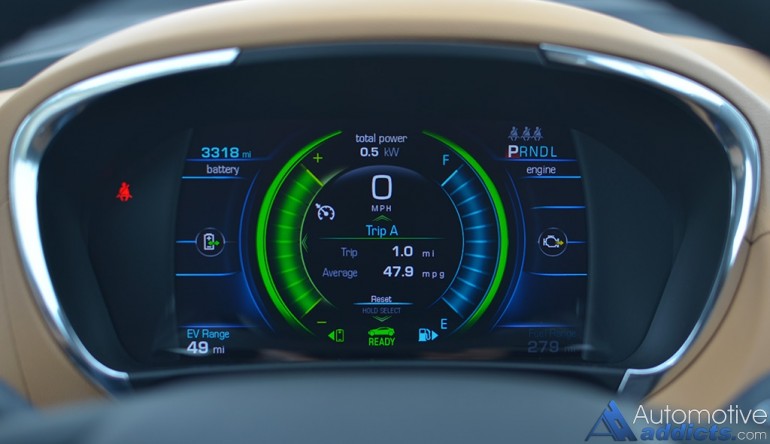 The 2016 Chevrolet Volt is a vast improvement over the last generation. In driving the Volt, my thoughts concluded on how the advancement of engineering and inventive thought went into the Volt making it a seamless driving experience. The new Volt takes the benefit of decent fuel consumption for the range extender yet provides an acceptable electric range for average to short daily commutes.

>> Get the best price on the Chevrolet Volt from a network of local dealers now. <<