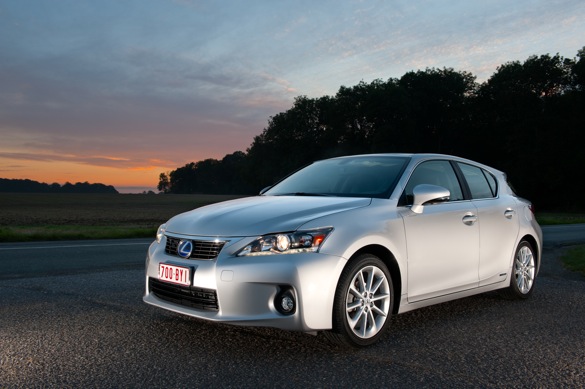 As hybrids go, Lexus’ CT 200h is a mixed bag. Lexus wants to sell it as a “sporty” hybrid, but at the end of the day it’s a Toyota Prius with a nicer interior and a stiffer suspension. Even the “Sport” driving mode doesn’t add much in the way of excitement, and aside from the occasional moped or scooter, you won’t be showing tail lights to too many vehicles during a roll on. We like the CT 200h well enough (for a hybrid), but it’s got as much in common with sports cars as Justin Bieber has in common with Marilyn Manson.

That’s why we’re even more confused at Lexus’ announcement of an “F Sport” kit for the 2012 Lexus CT 200h. Check that particular option box, and you’ll get a revised body kit, a black-mesh grille, unique 17-inch wheels, F Sport sill plates, a leather steering wheel and shift knob, aluminum pedals and a retuned suspension. What you won’t get is more power, so the F Sport CT 200h has to make do with the same 134 horsepower as the standard CT 200h. Worse, there’s no option for a manual transmission; instead, the only transmission available is a CVT.

We’re sure the stiffer suspension will improve turn-in and maybe even lateral acceleration, but probably at the expense of ride quality. We fail to see the point of building a hybrid with a harsh ride and no improvement in braking or acceleration, just to slap an “F Sport” badge on it. Will Lexus sell them? Probably, but not to those of us who understand what “sport” really means.