It’s Official: The Lexus LFA Laps The Nürburgring In Under 7:15 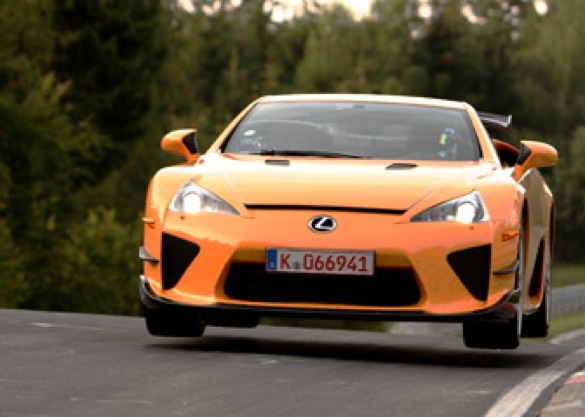 Last week we brought you an unconfirmed report that a Lexus LFA, equipped with the $70,000 Nürburgring Package, lapped Germany’s Nürburgring Nordschleife in 7:14. It turns out that report was false; the car actually took 7:14.64 seconds to get from bridge to gantry, documented in the video below. Nonetheless, that’s a monumentally impressive time, and Akira Iida’s skill at wrestling the car through the corners at speed is a sight to behold.

The LFA used in the record attempt was a production car, with only a roll cage added for safety. Stock tires were used, not the DOT-approved competition tires favored by other brands during record attempts (Porsche and Corvette, we’re looking at you). The Lexus LFA is now officially the fourth-fastest production car around the ‘Ring, but we’ll cut it some slack since slots 1-3 are occupied by the Radical SR8LM (not our definition of a production car), the Radical SR8 (ditto) and the Gumpert Apollo Sport (closer to a production car, but where’s your nearest Gumpert dealer?). In our book, the LFA is the fastest real production car in the world, which gives Lexus bragging rights. For now, at least.