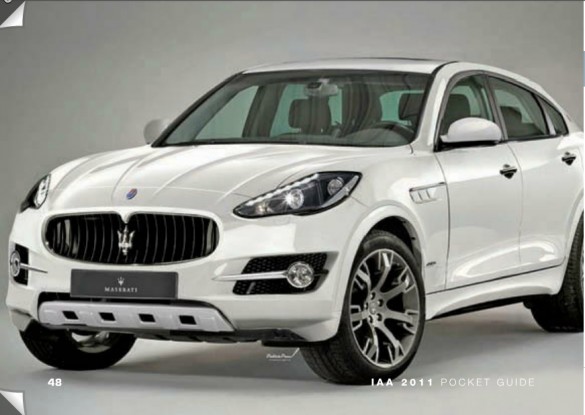 Funny, but the vehicle pictured above doesn’t look like a Jeep Grand Cherokee. We’re not sure it looks like a Maserati, either, despite the trademark grill and trident. In fact, it looks like the offspring of a BMW X5 mated with an X6 to us, but that’s not a bad thing. In fact, we’ll admit to being impressed with the styling, at least from what we can see in this low-res preview image.

Maserati’s SUV will be built on the Jeep Grand Cherokee platform at Chrysler’s Jefferson North assembly plant in Detroit. Plans call for the yet-to-be named SUV to use Maserati’s 4.7-liter V-8, not either of the Hemi-V-8s in the Chrysler product catalog. Since the Maserati V-8 puts out some 450 horsepower, and has a decidedly Italian exhaust note, it’s probably a better fit for this particular application. There’s a good chance that Maserati will also offer up a diesel engine for the European market, probably a more highly tuned version of the oil-burner used in the Euro Jeep Grand Cherokee.

The Maserokee is expected to hit Maserati dealers in 2013, at a yet to be determined price. Aimed more at the Porsche Cayenne than at Jeep’s own Grand Cherokee SRT8, you can expect the luxury performance SUV to pack a price tag on par with other models in the Maserati lineup, which start at around $120,000. This much is sure: building a Maserati in Detroit will add a whole new dimension to Chrysler’s “Imported From Detroit” ad slogan.