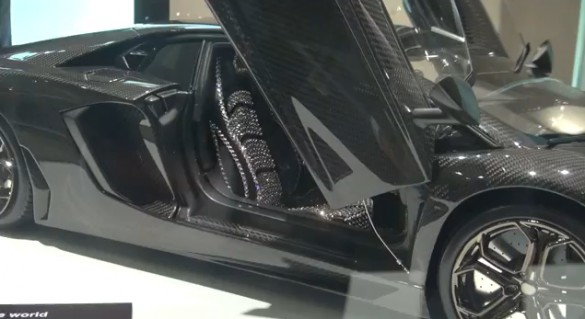 A Lamborghini Aventador costs $379,000, which is serious money by almost anyone’s definition. That investment buys you a 700 horsepower supercar, and the envy of your friends and neighbors. Like most cars, the more you drive an Aventador, the less it’s worth; even if you park it in your garage and never drive it, it’s likely going to be years (or even decades) before the car increases in value.

On the other hand, art can often be a good investment, which is why German artist / model maker Robert Gulpen crafts exotic cars out of precious metals, exotic components and rare gems. His models typically take 200 hours to complete, and the price of each one is “available on request.” Let’s be honest here: if the price of a sterling silver with gold accents Mercedes Benz 300 SL Roadster, in 1:16 scale, is even a concern, then you’re not a serious customer.

For REALLY serious customers, Robert Gulpen has created the world’s most expensive model. His rendering of a Lamborghini Aventador, in 1:8 scale, is built from real carbon fiber blended with gold thread just 1/1000 of a millimeter in diameter. The rims and the interior parts are both cast from gold and platinum, and the seats are inlaid with diamonds and other gemstones. 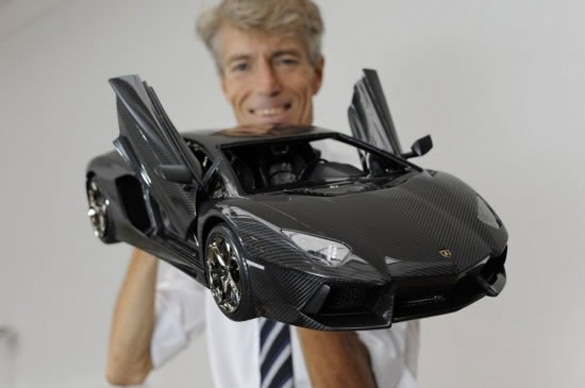 Gulpen estimates that he’s got about $2.8 million worth of raw materials in the car, plus some 500 hours spent crafting it. When it hits auction in December, the starting bid will be $4.83 million, which makes this the most expensive model car ever created. Gulpen has snapped up two other world records with the project as well, including the most expensive Lamborghini logo and the world’s safest display showcase.

If the car sells at auction, Gulpen has committed to donating $690,000 to charity. That may be noble, but we’re still calling this stupid money; if blowing five million dollars on a model car (even one crafted from precious metals) sounds like a good idea, you simply have too much money.

Source: Carscoop, via Left Lane News and You Tube