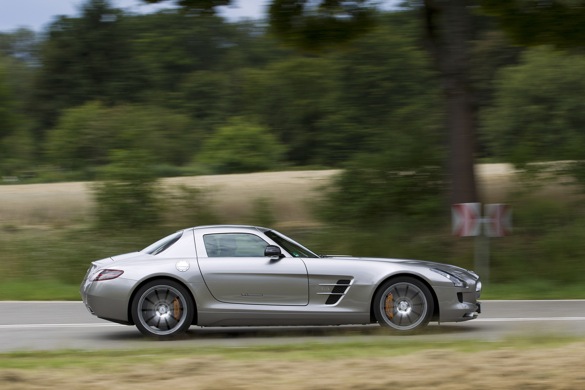 I can appreciate Mercedes-Benz automobiles for what they are, but I have to say that I don’t really aspire to own one. Yes, they’re safe, yes, they’re stylish, but most, in my experience, are clinical and without emotion. Driving a fast car that doesn’t feel fast isn’t my idea of a good time, and luxury isn’t high on my list of priorities.

The exception to this rule is Mercedes-Benz’s Black Series, for which I have lusted after every single model. The formula for building a Black Series car is fairly simple: take an AMG-tuned Mercedes coupe, make it lighter, add sport seats and aerodynamic enhancements, then stuff in as much horsepower as you can. Black series cars are usually the most powerful models in the Mercedes lineup, and as you may guess, they’re built in a limited production run and priced accordingly.

Autoevolution tells us that Mercedes-Benz has confirmed the SLS AMG will get the Black Series treatment. Anything else is speculation at this point, but word is the SLS AMG’s 6.2-liter V-8 will get a boost in output from 563 horsepower to 610 horsepower. Torque is said to increase from 480 ft-lb to 499 ft-lb, and we’re guessing the car will shed some of its 3,600 pound curb weight to earn the Black Series designation.

The SLS AMG Black will probably make it to this side of the pond, but only in limited quantities. If you’re lucky enough to have a bank balance in the seven-digit range, now is the time to visit your Mercedes dealer and put a deposit down. Like all of the Black Series cars, supply stops just short of demand.