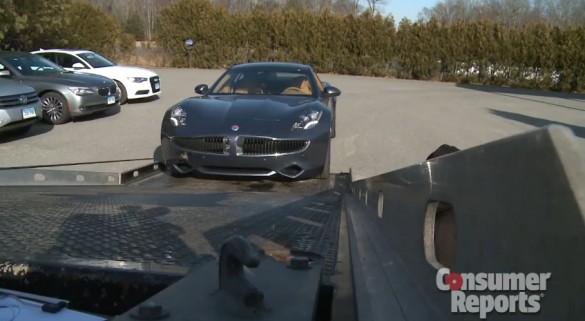 Boutique automaker Fisker probably doesn’t need any more bad press. After all, its Karma sedan has only been in owners’ hands for a few months, but the company has already struggled through two recalls (one battery-related, the second software-based) and a recent round of funding-related layoffs. Now comes word from Consumer Reports, via Autoblog, that the Karma purchased by CR died during the magazine’s check-in process.

While critics complain that CR isn’t always as objective as it would have readers believe, it gets credit for purchasing each of the vehicles it road tests. In the case of the Karma, that purchase set the magazine back over $100,000, which is roughly 10,000 times our own budget for purchasing test vehicles. Upon delivery and during CR’s check-in process, its newly acquired Karma suddenly refused to engage any gear beyond park and neutral. According to CR, it was the first time in the publication’s history that a car failed before completion of the initial check-in.

The local Fisker dealer immediately dispatched a flatbed to retrieve the car, which is undergoing diagnostic tests. In fairness to Fisker, it’s reasonable to expect glitches from any new car, especially one that uses a complex, extended-range electric drivetrain. There is, apparently, some validity to the adage that you should never buy a first-model-year-car, no matter how good it looks.