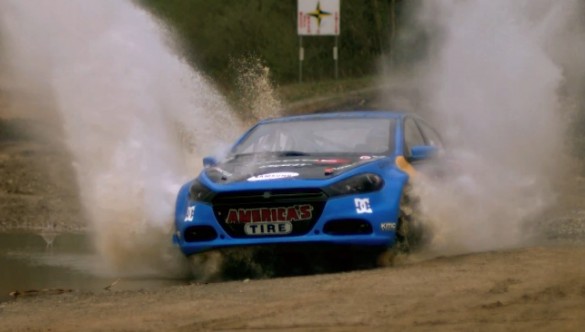 Very shortly, you’ll be able to walk into a Dodge dealer and put money down on a new Dodge Dart compact sedan. While the Dart you can buy promises to be much better engineered and built than the Dodge Caliber it replaces, it’s still no match for the Dart that Travis Pastrana will be driving in the 2012 Global RallyCross season.

Pastrana’s Dart gets 600 horsepower and all-wheel-drive, while the Dart you can buy gets a fraction of that and sends its power to the front wheels only. We seriously doubt that the Mopar parts catalog has what you need to build a Dart with 600 hp sent to all four wheels, and we’re pretty sure that Pastrana’s ride isn’t street-legal in any of the 50 states. It does look plenty entertaining, though, and we’d welcome the chance to spend a day behind the wheel, playing in the dirt.

The Global RallyCross season kicks off in Charlotte, North Carolina on May 26, and Pastrana can expect serious competition this year. Dave Mirra is back, again driving for Subaru, while Tanner Foust and Marcus Grönholm will be driving the proven Ford Fiesta. Rhys Millen will compete in the series this year, driving an all-new Hyundai Veloster. If you want to check out the schedule of events or learn more about the Global RallyCross Series, head on over to the GRC webpage.