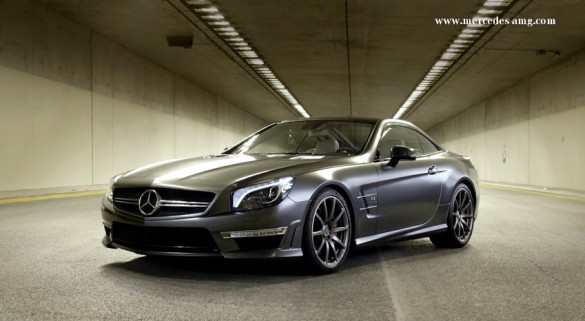 AMG has been making Mercedes-Benz products go faster since 1967, and to commemorate 45 years of successful tuning, Mercedes-Benz is releasing an Anniversary Edition of the SL 65 Roadster. Details on the special edition, of which only 45 will be built, are lacking but Mercedes is quick to point out that the SL 65 AMG is the most powerful production car built in Germany. In the land of the Autobahn, that’s saying something.

Even regular SL 65 AMG roadsters come with 621 horsepower and 738 pound feet of torque, so adding more power to the Anniversary Edition seems like overkill to us. More power won’t make a faster SL; instead, it will likely translate to more tire smoke upon acceleration. Instead, we’re betting that the Anniversary SL 65 will come with every conceivable luxury option in the Mercedes-Benz catalog, and will likely get a unique leather interior and special commemorative badging.

Outside, the special edition wears a “frozen gray” paint scheme, which still looks like primer to us. We know it’s hot and trendy, but it simply doesn’t look as good to our eyes as a conventional, glossy finish does. Add in the extra care required to keep the matte paint in good condition, and we’re rather not have to travel with paint care products, just in case we encounter the occasional bird-bombing.

Of course if you have the kind of money that the Anniversary Edition SL 65 will require, you probably have an entourage following you just for wildlife or tree sap paint emergencies. We have no idea how much this special edition will cost, but we’re guessing it will be far more than the regular car’s $203k price of admission.