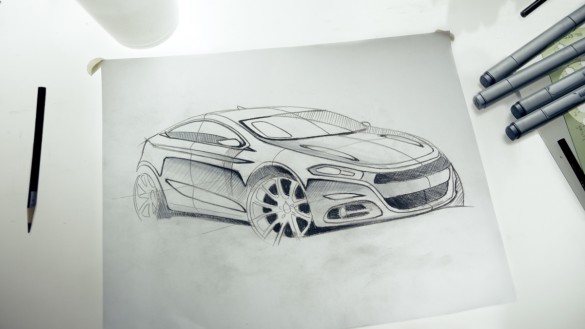 A design rendering of the 2013 Dodge Dart – Image: Chrysler

Think coming up with new cars is easy? Think again, especially when your company is headed by the notoriously-opinionated Sergio Marchionne, and especially when the car is as financially significant as the new Dodge Dart. Designing cars, the video tells us, takes countless hours of meetings, a calendar full of sleepless nights and enough coffee to float an aircraft carrier.

Get it right, and the end result is likely to be a home run product. We’re pretty confident in saying that about the 2013 Dodge Dart (despite the fact that we’ve yet to drive one), since it offers up reasonable performance, impressive fuel economy and an almost unbelievable starting price. The fact that it’s got a state of the art infotainment system and comes wrapped in sexy sheet metal won’t hurt sales one bit, either.

Given the commercials we’ve seen from other automakers lately, this spot (which will debut on national TV during tonight’s Major League Baseball All-Star Game) is truly a breath of fresh air, and we tip our caps to Chrysler for making us smile. Now, if they’d only put a Dart in our hands to evaluate, maybe we can tell you if the car is as good as the commercial, too.