Is This The Production Version Of Porsche’s 918 Spyder? Video 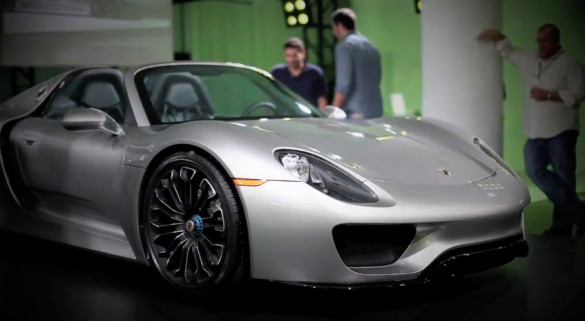 Porsche has released plenty of images of its prototype 918 hybrid supercar, but has yet to publish stills or video of a production-ready version. If Left Lane News is correct, one of the automaker’s vendors may have stolen Porsche’s spotlight by releasing footage of the 918 production version before the Stuttgart-based automaker.

New York’s Canoe Studios recently held a pre-release party for potential Porsche 918 buyers. On display was the 918 RSR prototype racer, but after initial formalities the group was escorted to a secret room, where the production version of the 918 was revealed. The video below, filmed by Canoe Studios’ John Seabrooke and posted to YouTube by liquidsk8s, captures highlights from the event.

Some changes are obvious, like the larger side view mirrors and marker lights necessary to meet worldwide safety standards. Exhausts exit out the rear instead of the side (as on the RSR), and the wheelbase appears to be stretched to improve interior room. As with the prototype, the production version (assuming this really is it) is simply stunning, and we’d argue that it’s among the most beautiful Porsche designs ever penned.

When released, the 918 will produce a combined 770 horsepower via a 4.6-liter V-8 and a pair of electric motors. With one electric motor driving the front wheels and a second driving the rear wheels, the 918 can power two or four wheels as conditions warrant, with power from the car’s V-8 directed to rear wheels only. Despite such lofty horsepower numbers, Porsche claims the 918 can deliver “up to” 78.4 mpg, but we remain somewhat skeptical on that.

Pricing has yet to be officially announced, but you can safely bet the 918 will be among the most expensive Porsche models ever produced. If the car lives up to the hype Porsche has built around it, it will truly be ground-breaking.