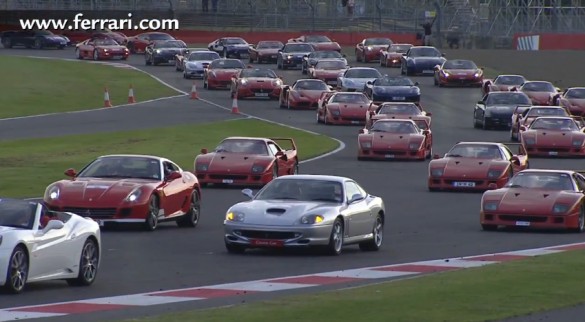 Ferrari recently held a Ferrari Racing Days event at Britain’s Silverstone Circuit, and it seemed like a good opportunity to set a new world record for the greatest number of Ferrari automobiles on a single track at one time. The goal, according to the Italian manufacturer, was to get 1,000 prancing-horse cars on the track at one time.

Open to any year, make or model of Ferrari, the event ultimately drew 964 cars to the track. There, a parade lap was led by none other than Felipe Massa, one of two Formula One drivers who race for Scuderia Ferrari. While confirmation from Guinness is still pending, it looks like there was enough documentation to certify a new world record without difficulty.

As you’d expect, speeds were kept to a minimum and a good time was had by all. It’s impressive to see so many Ferraris clogging Silverstone, making the famous racing circuit look like the entrance to New York’s Lincoln Tunnel at rush hour on a Friday afternoon.

If you’re a fan of the marque, it’s impossible to watch the video without naming the cars as they pass. Sure, there are the expected 458s and Californias, along with the more affordable Mondials and 308s, but there are also a few Enzos and F40s in the mix, too.