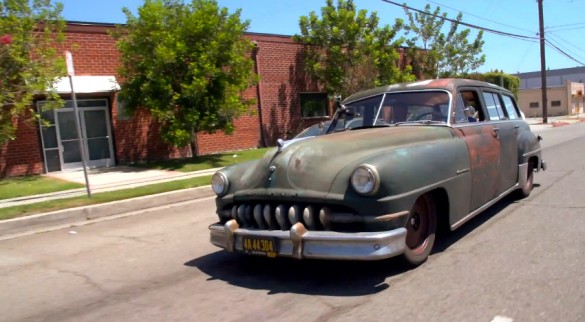 There’s one problem with driving a nice car, particularly one worth a lot of money: parking it generally produces a sense of paranoia. At the very least, you’re likely to return to fingerprint-smudged windows and paint, as others check out your ride. Worse, you can return to find your car keyed or other wise vandalized, since some don’t respect the better fortune of others. Far, far worse, you can return to find your car gone, regardless of the precautions you’ve taken to prevent its theft.

Driving a nice car can pose an equal number of risks, as other motorists get dangerously close to see if that really is a Ferrari, Lamborghini or other exotic. What is you could have a modern performance car that no one would give a second look to? Wouldn’t that be the best of both worlds?

Enter Icon’s Derelict series, which are a cross between a resto-rod and a rat-rod. From the outside, they look like rolling wrecks that no self-respecting car thief would be caught driving. Inside, period correct upholstery and pitted chrome tell others to move along, there’s nothing to see here. Start the car, however, and those in the know will realize that all is not what it appears.

Jonathan Ward, owner of Icon (best known for its stunning Toyota FJ and Jeep CJ rebuilds), has a 1952 DeSoto Derelict for his daily driver. Under the hood lurks a 6.1-liter Hemi V-8, pulled from a 2010 Charger SRT8, and the car rides on a custom frame and custom suspension. Behind the brown steel wheels lie Wilwood rotors and six-piston calipers, ensuring that this derelict stops as if it had hit a wall. It’s got all the comfort features you’d expect in a modern car, like air conditioning (which blows through the dash-mounted speaker grille), a killer audio system, a tilt steering wheel and even Bluetooth connectivity.

Look closer, and you’ll see some really impressive attention to detail: the DeSoto hood ornament was drilled hollow and is now illuminated by an LED, the airbox is a repurposed breadbox and the radiator catch tank is a vintage whisky bottle. There’s Icon’s trademark blue lizard, too, this time on the hood.

The best thing about the derelict series is that you can park it anywhere, and spend you time driving it instead of washing and waxing it. Icon will build one for you, too, but plan on spending big money to park one in your garage or in your driveway.