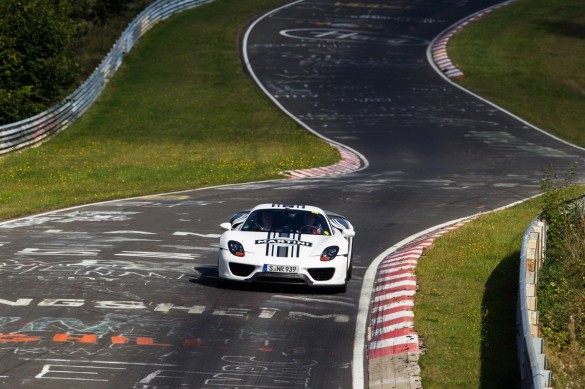 If you were to compile a list of street-legal cars capable of lapping Germany’s Nürburgring Nordschleife in under 7:15, it would be a short one indeed. At 7:14.89, you’d find the Donkervoort D8 RS, at 7:14.64 you’d have the Lexus LFA with the Nürburgring package and at 7:12.13 you’d find the Dodge Viper ACR. Faster than that are the race cars thinly disguised as street cars, like the Gumpert Apollo Sport and the Radical SR8s.

Make a list of hybrids capable of lapping the ‘Ring in under 7:15, and the list includes but a single car. Yesterday, Porsche revealed on its Facebook page that the 918 Spyder had lapped the Nordschleife course in an impressive 7:14, shaving eight seconds off its previous best lap time of 7:22.

According to Porsche’s Facebook page, the car was equipped with the optional “Weissach Package,” although we have no idea what that may include. It was running on street-legal tires, which means that it likely could have gone even faster on race rubber.

It’s pretty clear that the 918 will live up to the performance expectations set by Porsche, but it’s still not clear if the car will deliver the impressive fuel economy (up to 78 mpg) that the German manufacturer originally claimed. We’ll find out when the car hits the market next year.