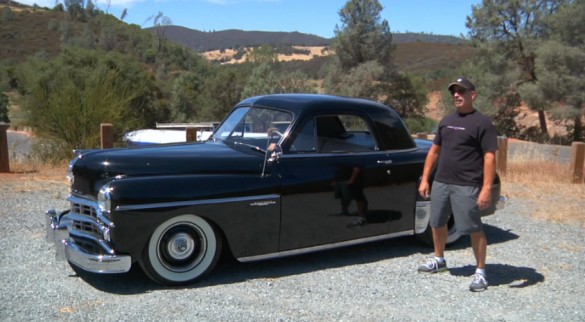 Dan Zuccaro and his 1949 Dodge Wayfarer

When you think of grand touring cars, a 1949 Dodge Wayfarer probably doesn’t come to mind. In fact, hot rods and GT cars are generally two different animals: GT cars are all about long-distance comfort at high speeds, while hot rods are all about style and speed from stop light to stop light. If these sets ever intersected, Dan Zuccaro’s 1949 Dodge Wayfarer would be in that small area.

At first glance, the Wayfarer looks to big and heavy to be nimble, but then you find out it only weighs some 3,300 pounds. To put that in perspective, consider this: a new four-door VW GTI Autobahn weighs 3,113 pounds, so this car is just one adult male passenger away from the same weight. It was built in an era when manufacturers didn’t worry about things like high-strength steel, or side impact door beams, or even dual rear brake lights.

Under the hood lurks a 383 cubic inch small block Chevy, good for 425 horsepower and 400 pound-feet of torque. Zuccaro opted to cross brands since the Chevy motor was a good fit and has enormous aftermarket potential. Should he decide that 425 horsepower isn’t enough, more grunt is just a bolt-on blower kit away.

The interior is mostly original, with the addition of modern amenities like air conditioning, cup holders and additional gauges to supplement the original art-deco ones. There’s no denying that the car has a certain presence and appeal, and it will certainly get you noticed even more than a worked Mustang or Camaro. It’s not for everyone’s taste, but we salute Zuccaro’s take on what makes a hot rod.