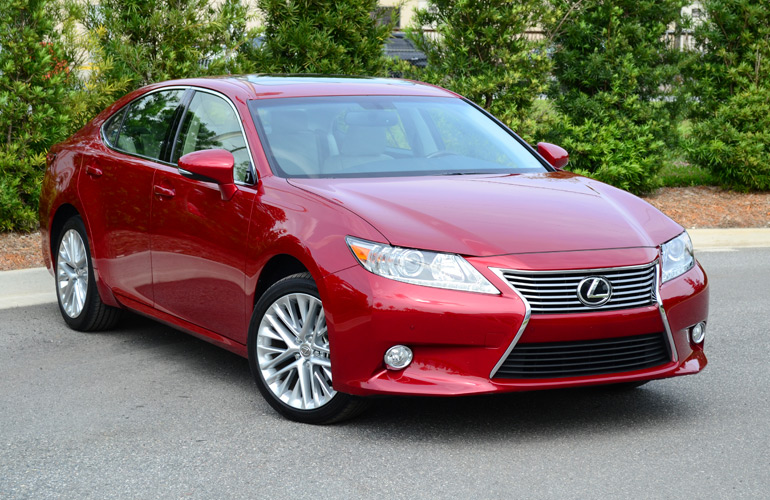 The all-new 2013 Lexus ES350, redesigned in and out, continues on Lexus’ pursuit of offering a highly polished and refined mid-sized luxury sedan. New design elements, advanced technology, and a carefully re-sculpted body makes the new 2013 Lexus ES350 an attractive yet value-conscience package for those seeking a vehicle in the entry-level luxury sedan segment.

Marking its 6th generation, the new 2013 Lexus ES350 carries over the silky smooth 3.5-liter V6 engine, which can now use regular-grade gasoline, still providing an ample 268 horsepower and 248 lb-ft. of torque. Fuel economy for the new Lexus ES350, using regular gas, was found to be consistent with its EPA estimated figures of 21 mpg city and 31 mpg highway. I had no issues with hitting those numbers but during a mix of driving, highway and city, the new ES350 leaned more towards an average of 23 mpg. 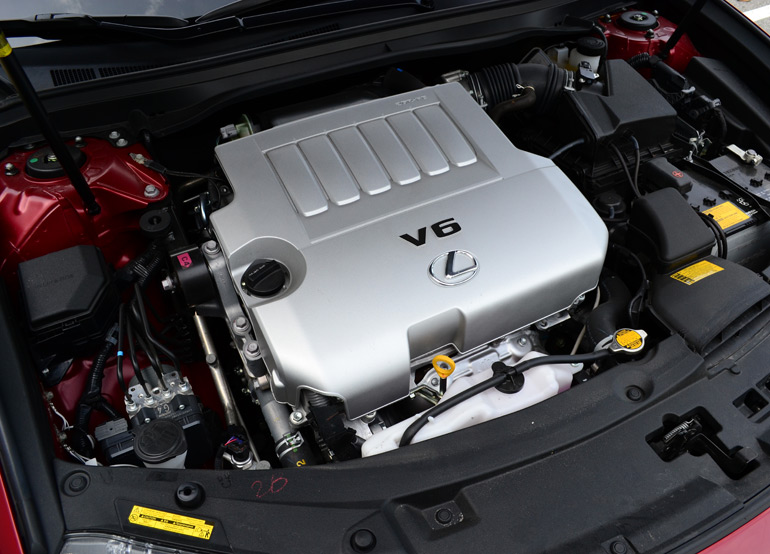 The new 2013 ES350 gets a longer wheelbase opening up additional interior room and an even smoother ride. The additional refinement with many visual and creature comfort aspects put Lexus’ entry-level luxury sedan at the forefront of appealing and affordable luxury in an automobile. 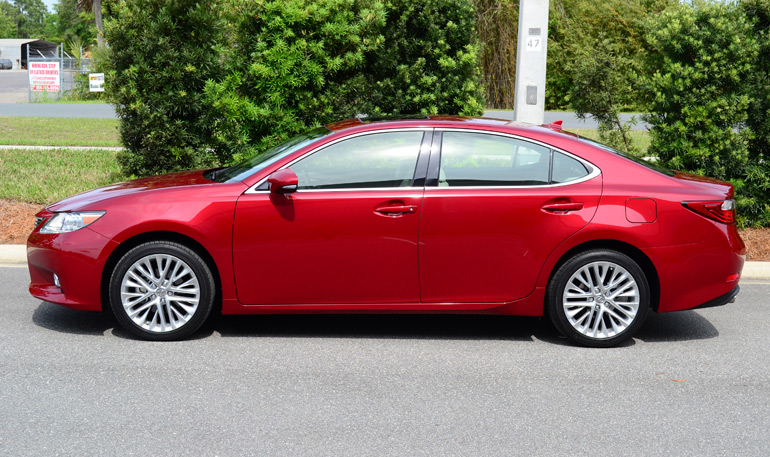 Driving impressions of the new 2013 Lexus ES350 are surprisingly better for those with a slight enthusiast edge. The Drive mode selector switch, featuring an Eco, Normal and Sport mode, is somewhat of a gateway for enthusiasts to get the small doses of sport out of the new ES350. In Eco mode the electric steering wheel assist is boosted, giving you a virtually effortless time when turning the wheel while the computer decreases the throttle input slightly. Also in Eco mode, shifts from the 6 speed automatic transmission are made earlier and the ac/heater system fan speed is lessened to conserve power usage. Normal mode piggybacks off of Eco mode with a slight advancement in throttle position and sensitivity while you can still expect the transmission to conduct earlier shifts into a higher gear when the ecu feels necessary. Sport mode adds effort to the steering giving you a nicely weighted feel, while the throttle becomes more responsive to lighter inputs. At this point the smooth yet quick-shifting 6 speed automatic transmission tends to hold onto lower gears longer but still utilizes the high gears when cruising near highway speeds. A manual shift mode can be accessed through the shifter gates to row through each gear but with some impending control from the computer when the engine redline is met. 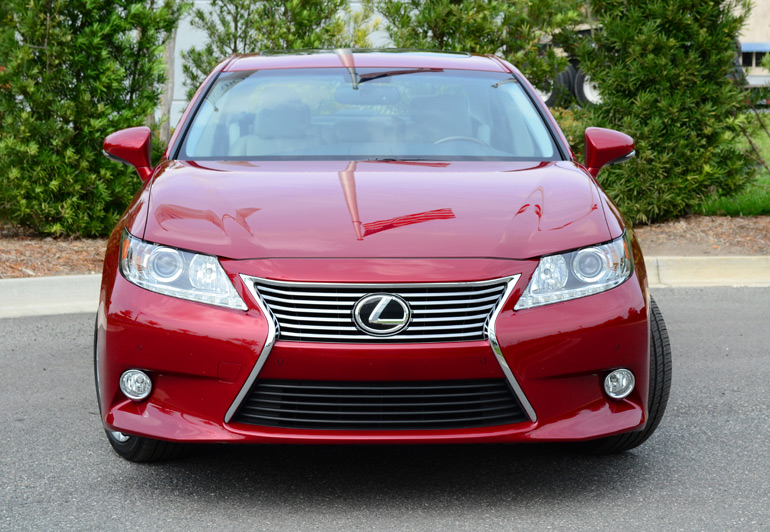 The Lexus ES, evolving far from its old polished Toyota Camry connotation roots, is more of its own breed even though it shares a few platform characteristics with the all-new 2013 Toyota Avalon. The relationship between the two is clearly separated by the new 2013 ES350’s over-all uniqueness aside from many of the new Lexus-line traits, such as the new spindle grill design.

The new 2013 Lexus ES350 hugs the road delicately providing an extremely smooth ride with enough stability to assure you of traveling slightly beyond highway speeds with confidence. Outside of driving while playing smooth Jazz, the new Lexus ES350 seems it can handle the occasional rock and roll driving style but not on a sustained and prolonged basis. In other words, the new 2013 ES350 feels light on its feet at first but really begs for mercy with screaming tires when really pushed near its handling limits. Body roll is subtle with an abrupt lean into turns letting you know the handing limit is imminent. Though, the dampers are well-engineered to give you a good balance between a smooth ride adapted to most paved-road conditions and the handling abilities to play its Jazz music at the limit all day long. 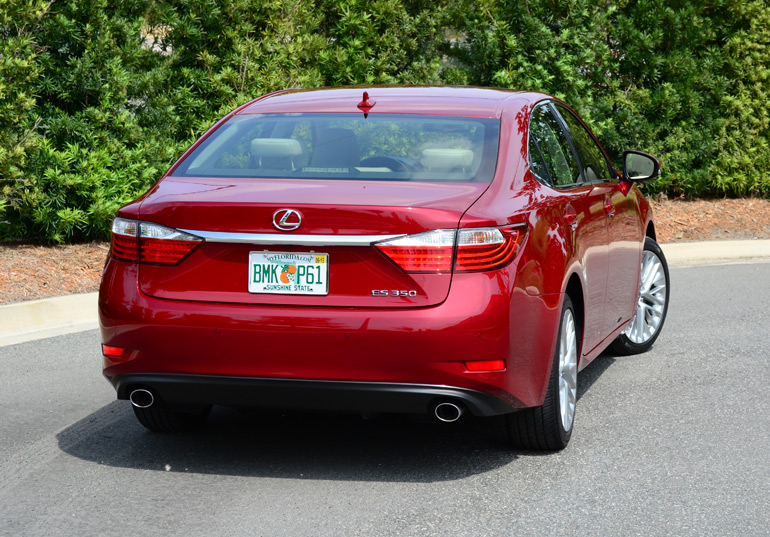 Acceleration from the smooth V6 engine is endearing and can be unpredictable, as the front tires tend to break loose regularly when you abuse the gas pedal. 0-60 mph times for the new ES350 come in around 7.1 seconds. Torque steer is mostly nonexistent but an extra effort is required to bring the ES350 back in line if you accelerate hard off of a turn. Basically, it wants to go in the direction that you point it and keep going in the same direction all while the traction control light is steadily blinking. This is mostly a good thing for enthusiasts but becomes something that others get acclimated to if they like to play the game of ‘how many times they can make the traction control light blink when accelerating.’

The exterior design of the new 2013 Lexus ES350 takes the outgoing model and further polishes it. The new Lexus spindle grill can be a bit much for some to digest at the moment, but it helps signify the new design language in the new Lexus vehicle lineup. The body lines flow smoothly where nothing looks out of place, from the slanted LED day-time running lights outlining the headlights, through the slightly chiseled rear deck lid almost hanging over the rear LED tail lights – somewhat like an integrated spoiler. The new 2013 ES350 almost looks to have a lower profile making it seem as if it is better connected to the road over the outgoing model. The design elements collectively come together to make the new ES350 a head-turner for what may have been somewhat incognito with previous generation’s exterior designs. 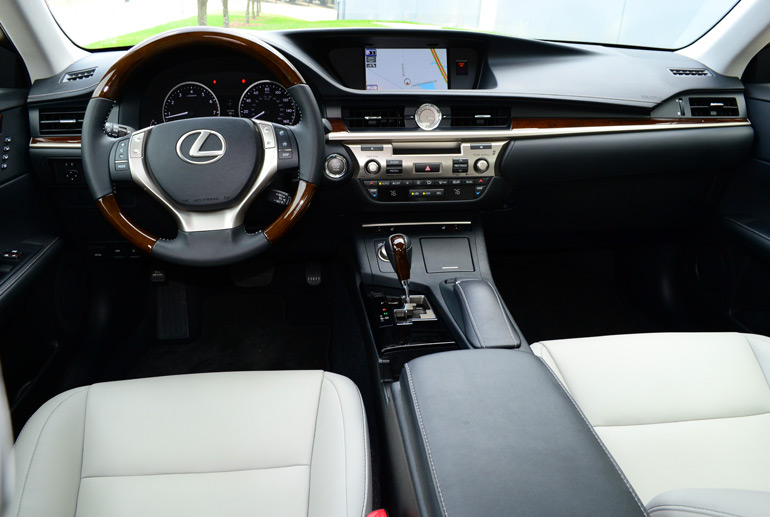 The all-new 2013 Lexus ES350 interior is very inviting initially and keeps all occupants astonished with the attention to detail when it comes to the fit and finish of the interior. In all, the ES350’s interior exudes many quality aspects that later become a familiarized and rather expected trait. Fundamentally, the interior has nothing that really jumps out at you but it still makes you tentative of how well all materials flow together and where carefully selected for an unsurpassed exuberance of quality. 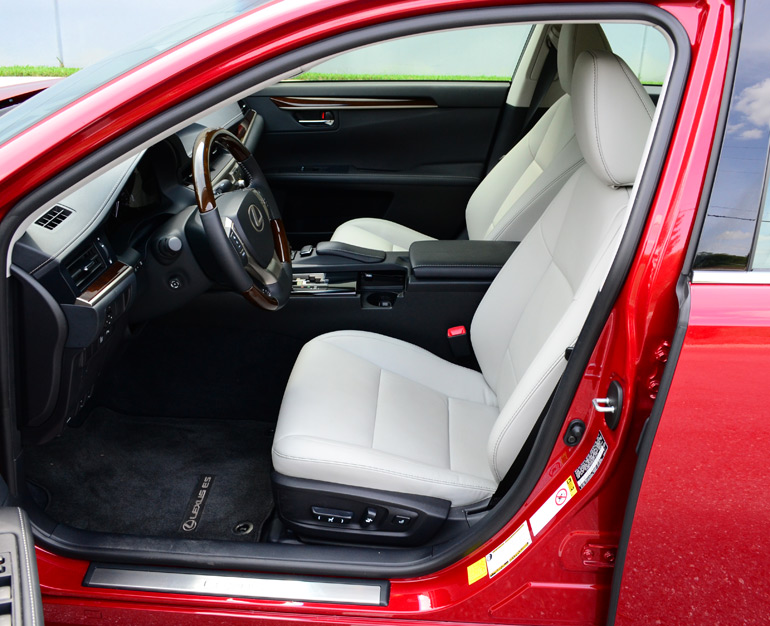 The cabin of the new 2013 Lexus ES350 is supple where much of the leather surfaces are well-padded and the actual leather texture is very soft but never rubbery feeling. Seating areas are very versatile with plenty of room for 5 adults. Seat comfort up front is great with a minimal amount of bolstering, almost enough for the ES350’s lateral handling abilities. The familiar electroluminescent Lexus gauge cluster is brightly lit and the high-resolution 8-inch LCD screen has big and clear graphical buttons for easy navigation using the central mouse-like controller. Lexus’ choice to utilize a remote-touch controller for navigating and selecting functions on the LCD screen, much like how you use a mouse on a computer, is an acquired taste for some yet others find it less distracting than most other infotainment controls from other luxury vehicles. The configurable force-feedback and sound feedback are both a nice element to help the driver stay focused on the road when making a selection on the screen. The controller fits well in a set of your fingers (one, two or three fingers) with a nice leather-trimmed rest for your hand below it. 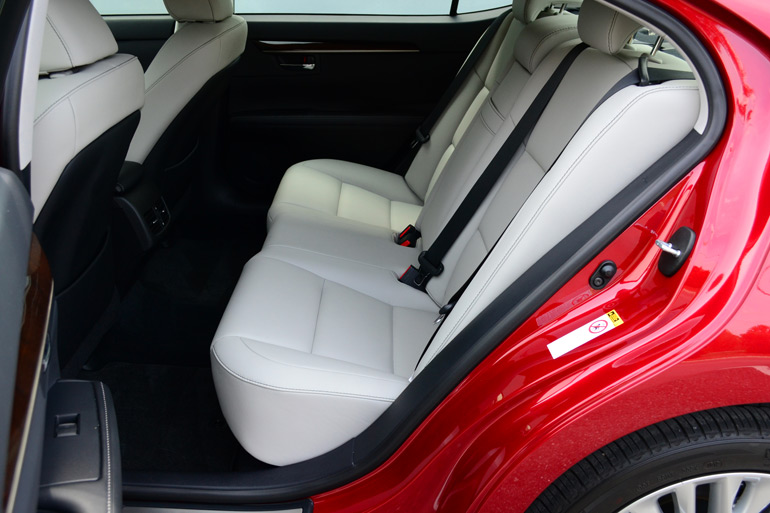 The all-new 2013 Lexus ES350 undoubtedly radiates luxury and is unmistakable for its purpose of a potentially well-appointed luxury sedan with room for 5. Lexus serves up 5 different option package levels with a plethora of pre-selected optional equipment. Each equipment group has a long list of features where some may over-lap lower-equipment groups. The configuration through Lexus’ website can be somewhat of a mixed bag. Several amenities and safety features, including 10 standard airbags, blind spot monitor, NavWeather, ambient interior lighting, ventilated and heated front perforated leather seats, GPS navigation, rain-sensing wipers and park assist, are offered in the few select package groups.