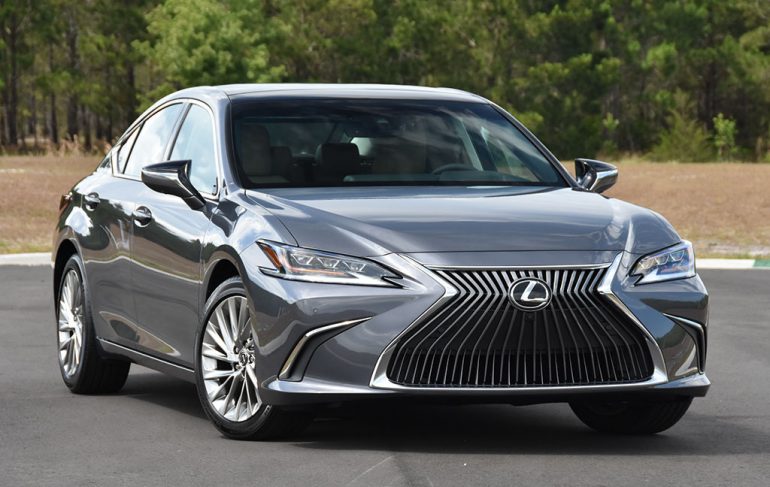 The Lexus ES has, in some ways, been a brand ambassador as it reaches into the entry-level of automotive luxury and expands upon it with a vehicle known for its class-leading reliability and exceptional build quality. For the 2020 model year, the Lexus ES 350 doesn’t change from its 2019 redesign, continuing the seventh generation’s newfound personality and availability of a sportier F-Sport model.

In my recent week, I had the chance to experience the 2020 Lexus ES 350 in its top-level Ultra Luxury trim with every option added on outside of what you get in the sporty F-Sport model. The Lexus ES 350 doesn’t depart far from a formula that has worked well to win over conservative luxury seekers. Most of what’s loved about the ES 350 is retained, such as its sewing machine-like 3.5-liter V6 engine that now touts 302 horsepower and 267 lb-ft of torque sent through a smooth-shifting 8-speed automatic transmission before the power reaches the front wheels.

Power from the smooth V6 engine comes on strong and, at times, will break the front wheels lose and even more so when you come out of turns. Here, the Lexus ES 350 shows off its robust naturally aspirated power, where a limited slip differential could be beneficial but is not offered. The welcoming power of the ES 350 keeps it on pace with what is expected from such a luxury vehicle. Handling is more on the relaxed side of things where the F-Sport trim fills a gap for those who desire a sportier character not only for looks but in the department of being a bit more stable and assuring with retuned suspension featuring adaptive dampers, something that is not available on other ES 350 trim levels. For the most part, the driving experience in the ES 350 Ultra Luxury is numb but exudes a luxury character for refinement, exceptional quietness, and ease of maneuverability. The only fault I find is the front wheels are eager to spin even with mid-level throttle inputs. The stability and traction control steps in softly most times but may cut the throttle when an abundance of wheel spin is detected. If you keep the ES 350 in a straight line and lay into the throttle from a stop, you’ll expect to get up to 60 mph in about 6.6 seconds. 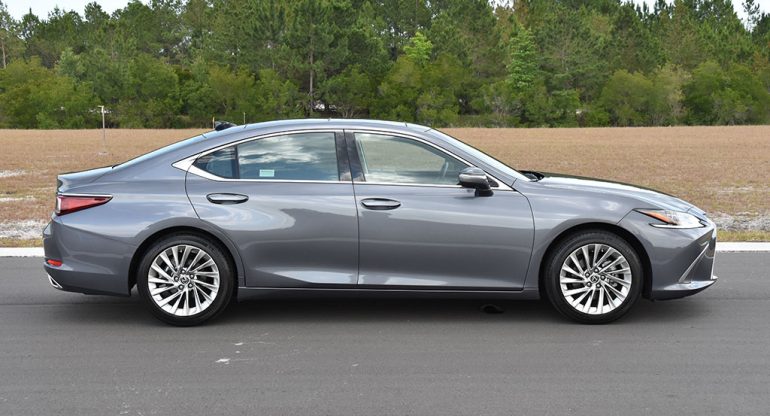 Fuel economy has been a bright spot with the ES 350 and even better in the available ES 300h hybrid. The ES 350 gets 22 mpg city, 32 mpg highway, and 26 combined, while you increase those numbers with the ES hybrid getting a combined 44 mpg, which will cost about $2,000 more than the normal ES 350. 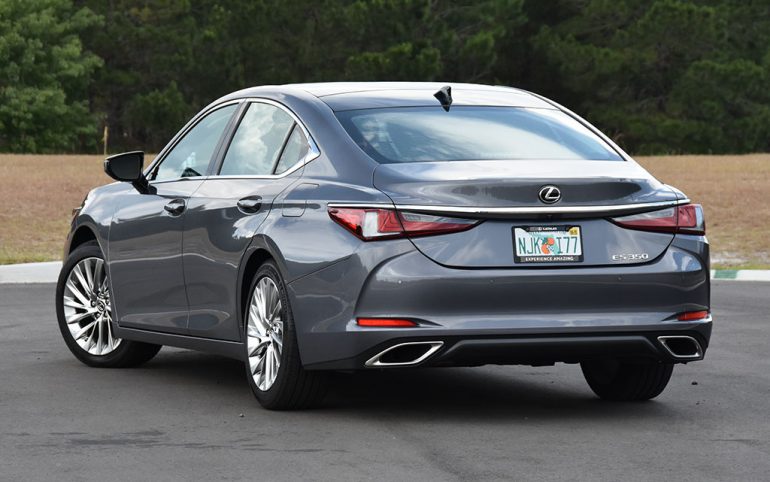 Outside, the Lexus ES 350 Ultra Luxury builds upon the style that Lexus is known for in many recent years featuring its space-dominating spindle grille up front and new bi-LED automatic highbeam headlights. The latest ES 350 can almost be classified as a modern-day classic as the designers have methodically sculpted the body lines but to not do away with what is recognizable by most for it being a Lexus. There is a new coupe-line silhouette through the sloping roofline that’s to be noticed in the seventh-generation ES, and a better-looking rear-end that looks sportier in any trim level. 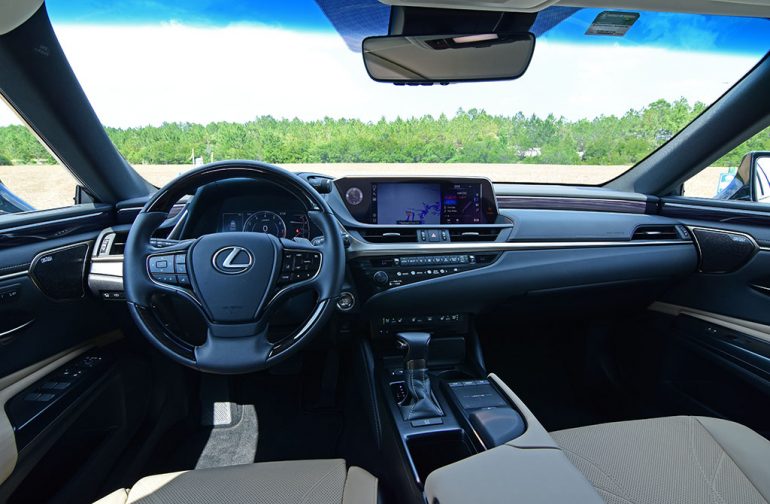 The larger proportions of the midsized ES 350, with class-leading leg room up front and out back, nearly rival full-size luxury vehicles. The long doors are almost a giveaway to the ample space inside of the new Lexus ES 350. The seating is comfortable, and in my Ultra Luxury test vehicle, there’s a bit of extra treatment given with semi-aniline perforated leather front seats with 14-way power adjustment for driver’s seat and 8-way front passenger’s seat. There’s also automatic heating and ventilation for the front seats, manual rear passenger sunshades, a power rear window sunshade, a massively large power-sliding panoramic glass roof with a power sunshade, and a power opening and closing trunk lid. All of the other expected luxury amenities and features are available, such as a heated steering wheel, a large 10.2-inch color heads-up display, Mark Levinson 17-speaker audio system, wireless phone charger, a bevy of active safety features, and a new 12.3-inch infotainment screen. 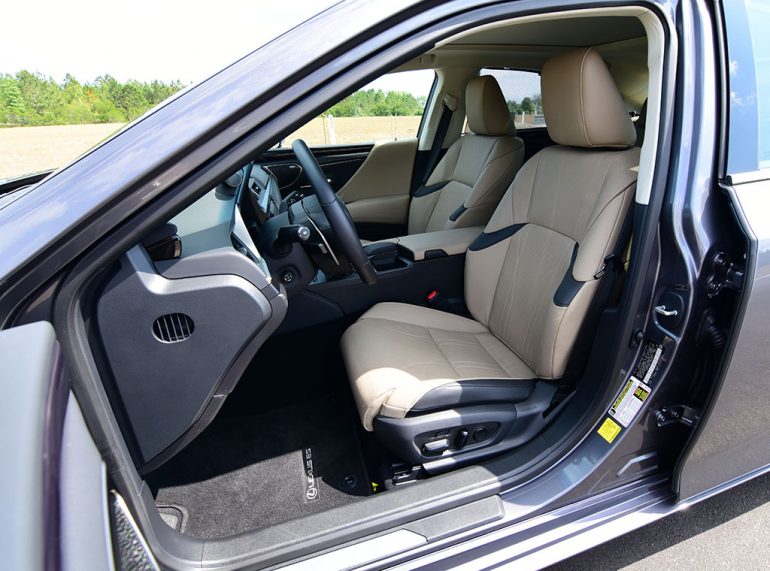 The downfalls I find in my eye with the Lexus ES 350 is a surprisingly high seating position for the driver’s seat and the quirky infotainment system that has to be operated by a central remote touch control touchpad. The infotainment system, which otherwise has a decent interface onscreen fed through a rather large high resolution 12.3-inch screen, continues to be cumbersome and distractive at times using the touchpad with its adjustable haptic feedback. While there are just enough physical controls for the audio and climate control system, navigating the infotainment unit continues to be cumbersome. Here, Lexus could greatly benefit by giving us a touchscreen – they don’t even have to revamp the overall onscreen interface – just make it a touch screen. It seems Lexus is slowly taking such advice and rolling out a new touchscreen interface on some vehicles, such as the new RX, which the next year’s ES could greatly benefit from if they choose to do so. 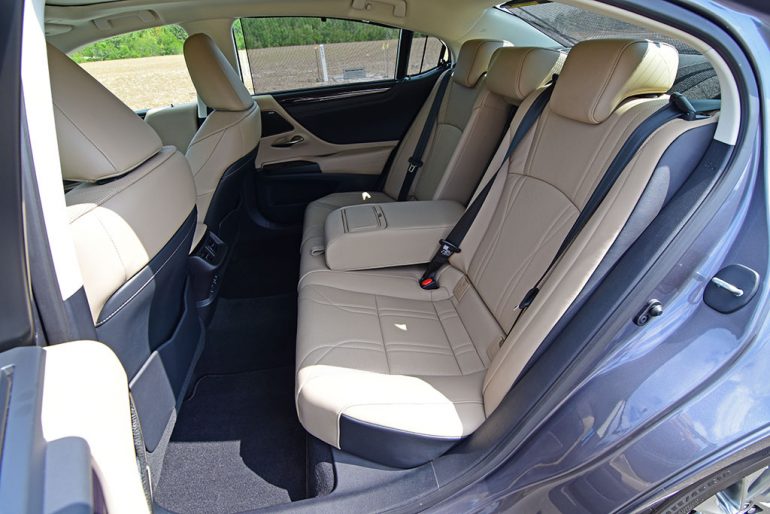 The Lexus ES has been tweaked a little with each generation and those tweaks go the distance to keep with the traditions that work for luxury buyers. Though, with such tweaks, Lexus has managed to increase the pricing as the top-level 2020 ES 350 Ultra Luxury will set you back $54,050 for my loaded-up test vehicle. Still, the ES 350 at its base level can be had for the starting price of $39,900 and still gets the Insurance Institute for Highway Safety’s Top Safety Pick Plus award partly due to the standard active safety equipment.