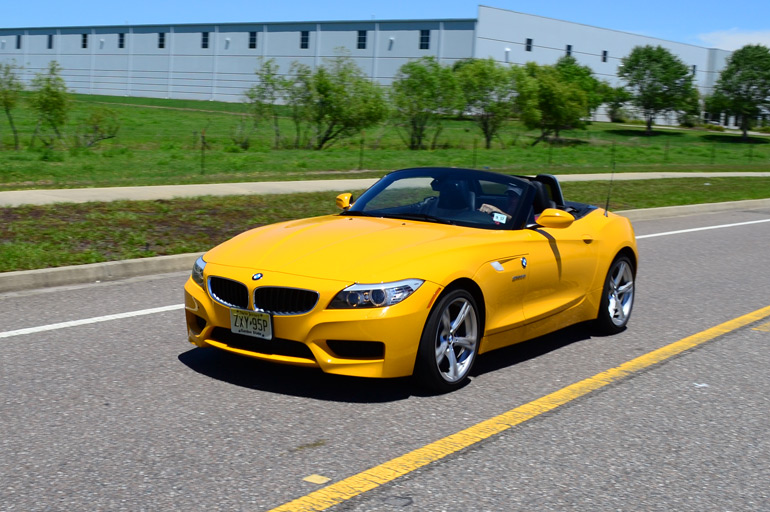 The BMW Z4 roadster isn’t for everyone, yet it is for everyone who desires something driver-focused, easy on the petrol, has two excellent seats surrounded by luxury, a hard drop-top, and the infamous Bavarian roundel stamped on the aluminum hood and rear deck lid. Receiving a complete redesign for the 2012 model, the new 2013 BMW Z4 freshens up its standard equipment list and keeps the German roadster an engaging experience for the convertible enthusiast. 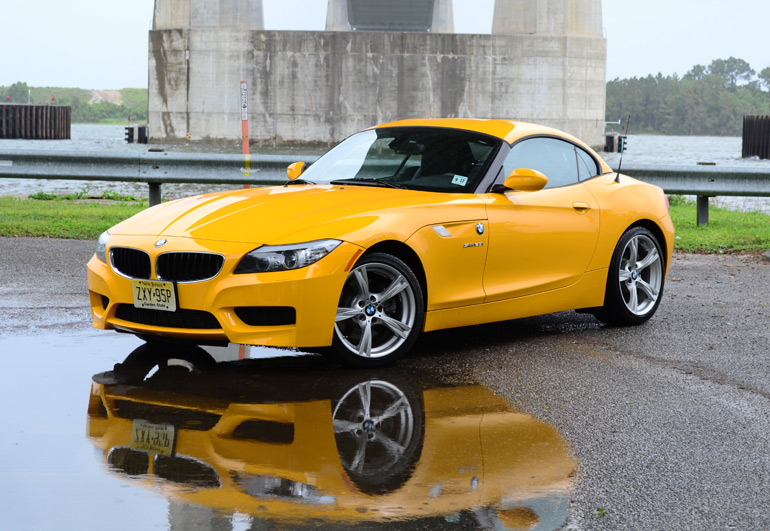 BMW is one of the few companies to consistently keep a tradition of making cars attractive for the enthusiast while some others have to play catch up after they assumed the common denominator was their choice audience. The BMW Z4 has remained in its exclusive corner for many always playing with the same old friends. It is possible now, with the new Z4, that the smallish BMW roadster will find its way to make some new friends by offering some new toys to play with in the form of a 240 horsepower and 260 lb-ft. of torque turbocharged 2.0-liter 4-cylinder, proving to be just as powerful as some V6 engines yet a serious gas miser. Moreover, aside from my SDrive28i Z4 test vehicle’s force-fed 4-cylinder engine, the Z4 can be had in a turbocharged 3.0-liter inline-6 cylinder sDrive35i flavor pumping out 300 horsepower and 300 lb-ft of torque. To top off the Z4 line, the sDrive35is gets a more powerful version of the Turbo 3.0-liter good for 335 horsepower and 332 lb-ft. of torque, with a full-throttle overboost feature reaching 365 lb-ft. of torque. 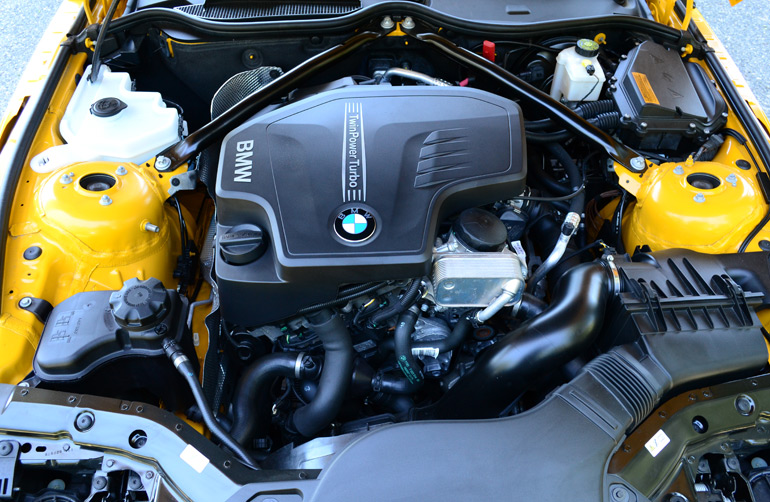 Midrange power from the turbo 4 is surprisingly plentiful and smoothly delivered. Even up high close to its 7000 rpm redline, the engine does not give out of breath, though from 5000 to 7000 rpm you don’t want to expect to produce any more power, but the output remains mostly consistent until fuel cut. The remarkable initiation of torque starts its peak output at a low 1,250 rpm. There is virtually no turbo lag and the turbo spools up remarkably fast followed up by a progressive release of pressure after letting off of the throttle. In a nutshell, this turbo 4-cylinder is among the best I have ever experienced in stock form, possibly producing more power than what is stated on paper by BMW. To add to the turbocharged 4-cylinder engine’s fuel efficiency, is an included Automatic Start/Stop function. The start/stop system works well with the manual transmission turning the engine off at stops while the clutch peddle is not pressed under certain conditions. The engine starts back in just under a second after depressing the clutch pedal to shift into first gear. 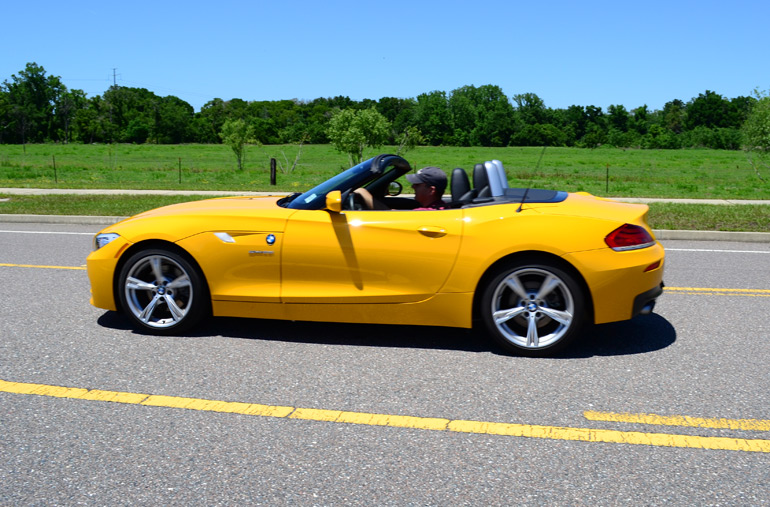 The new 2013 BMW Z4 sDrive28i can be had with a no-cost optional 8-speed automatic transmission, or the enthusiast desired 6-speed manual as equipped in my test vehicle. The new Z4 sDrive35i gets either the 6-speed manual box or the 7-speed automated dual-clutch transmission (DCT). The sDrive35is, for some odd reason, only gets the dual-clutch unit. Probably the gem of the bunch, if shear acceleration is not a deal-breaker, is the sDrive28i with the twin-scroll turbocharged 4-cylinder. Having less weight to carry around it tends to have slightly better handling and lower price to boot. 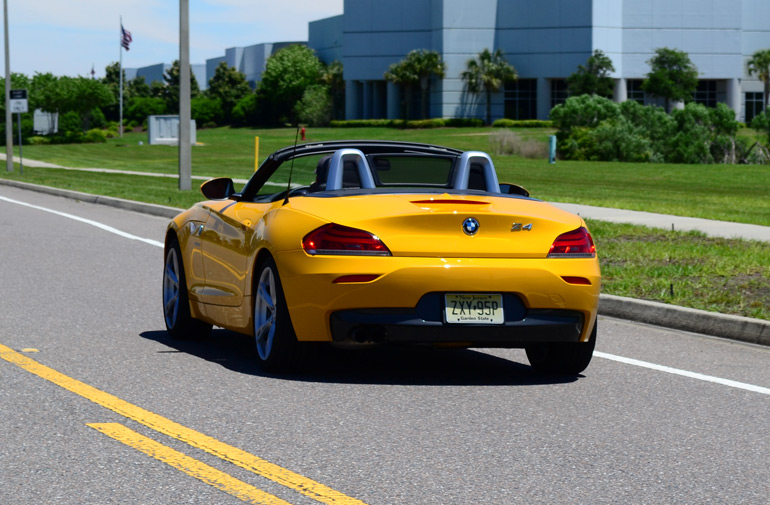 Having spent a good amount of time driving the new Z4 sDrive28i around town, I find that many of its better attributes shine through its Citrus Yellow M Sport Package and glistening Atacama Yellow exterior paint. Some of these traits would otherwise be hidden until you get in and live with the German roadster on a couple road trips. Those attributes pay homage to the rest of the BMW line of vehicles, especially by providing a surprising amount of legroom for those over 6 feet tall, such as myself. You would also take notice to an upscale cabin with high-quality materials where you get stitched alcantara trim lacing the dashboard and door trim. The beefy leather wrapped steering wheel fits in your hands like a glove, and the 6-speed shifter, unique to BMW, allows a few quick yet focused throws.

On the performance scale the new 2013 BMW Z4 sDrive28i is no pushover what-so-ever, even when it is described as having a smallish 4-cylinder engine. You can call the turbo 4 in the new Z4, the engine that could conquer, and conquer it does. 0-60 mph times come in just at 5.4 seconds. The Z4 sDrive28i boasts a nimble curb weight of 3,263 pounds allowing you to nudge out a 0.89g on the skid pad. Putting the Z4 sDrive28i through its paces can be somewhat of an uneasy feeling at first, mainly due to your seating position close to the rear wheels. At times when you find the handling limits, the Z4 bites back with additional grip. Basically, you must really feed the throttle and lay into turns to break the rear end loose. In other words, don’t expect all 260 lb-ft. of torque to upset the rear that much just by dropping the clutch with traction and dynamic stability control disabled. Possibly, the engagement level required for the Z4 mixed in with its ease of drivability makes for the perfect roadster driving machine formula. 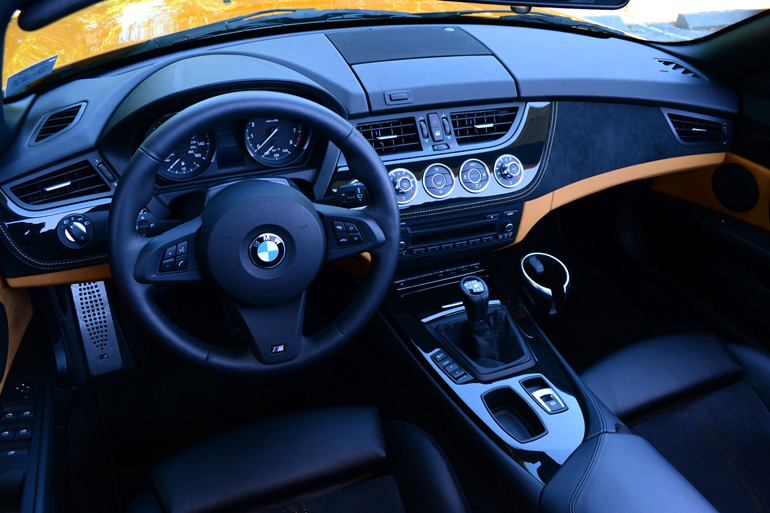 The interior of the new 2013 BMW Z4 sDrive28i fits the bill for a performance oriented roadster. The sport seats, courtesy of the optional M Sport Package, are very supportive with plenty of bolstering, accent stitching throughout the alcantara inserts, and leather surroundings. The M Sport Package, selectable in variety of extended interior and exterior colors, adds on an adaptive suspension system, M steering wheel, and 18-inch star-spoke alloy wheels wrapped in a staggered set of 225/40R front – 255/35R rear Bridgestone Potenza run-flat rubber. 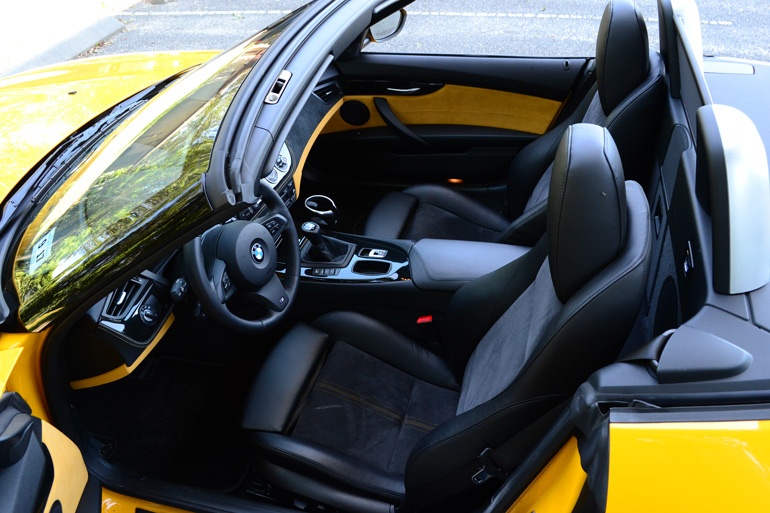 The Z4’s roadster cabin has an interesting rear-biased design where visibility is surprisingly good in both blind spot areas and over the long hood. The rear window area with the top up is deep enough behind the rear seats that you get a wide-angle glance at what is in the rear and in most of your blind spot areas. Putting the power top down, which takes a short 15 seconds, is a silent undisturbed motion that can be activated at speeds up to 35 mph. This is a great feature for those times you have impatient cars behind you at the traffic light that just turned green.

BMW has always built the Z4 as a purposed roadster, which in turn contributes to the rigidity of the new Z4. Hardly ever do you notice any body flex or abnormal vibrations with the hard-top up or down. The bulky size of the lower door frames gives away the additional structure supports incorporated in the new BMW Z4’s design to keep it stable at all times – considering it does not have a fixed roof. 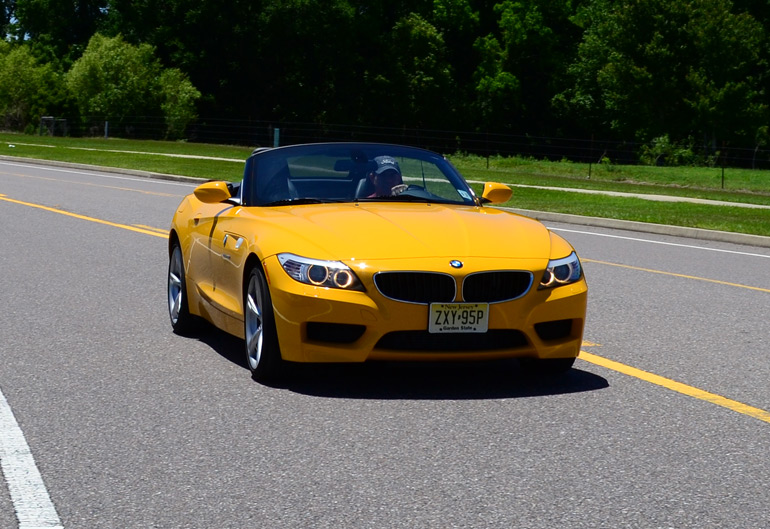 The new 2013 BMW Z4 sDrive28i is a dynamic and capable luxury-roaster that has what it takes to keep its two occupants enthused on short or long trips. During the long hauls, you not only conserve fuel with the EPA figures of 22 mpg city and 34 mpg highway, but you can stow your luggage in the trunk’s extra reserve space and let the top down all the while you enjoy the wind in your hair and sunny blue sky. The folding hard-top collapses into a uniquely small sandwiched area in the truck leaving you just enough room for two small sized luggage bags. I saw a combined average of 27 mpg around town and as high as 35 mpg on the highway for about a 20 mile stretch.

BMW shares its technology in a seamless fashion on the 2013 Z4 roadster offering most infotainment and comfort features found on the new 3 series vehicles. A long list of options and packages can quickly raise the price point of the new 2013 BMW Z4, however, you have a respectable base at just $47,350 to work with. Tacking on the M Sport/Citrus Yellow package, Premium Sound Package, heated front seats and BMW Assist w/Bluetooth, brings the price to $56,395 for my test vehicle including $895 destination charge. Pitted against its direct competition, the 2013 BMW Z4 sDrive2i exudes an edge over the likings of the new Mercedes-Benz SLK from an enthusiast perspective, but may end up being just shy of the all-new Porsche Boxster’s hardcore performance. Nevertheless, the new 2013 BMW Z4 sDrive28i combines all the good aspects of a true roadster as somewhat of a jack-of-all-trades in the convertible two-seater roll – still, no qualms here.