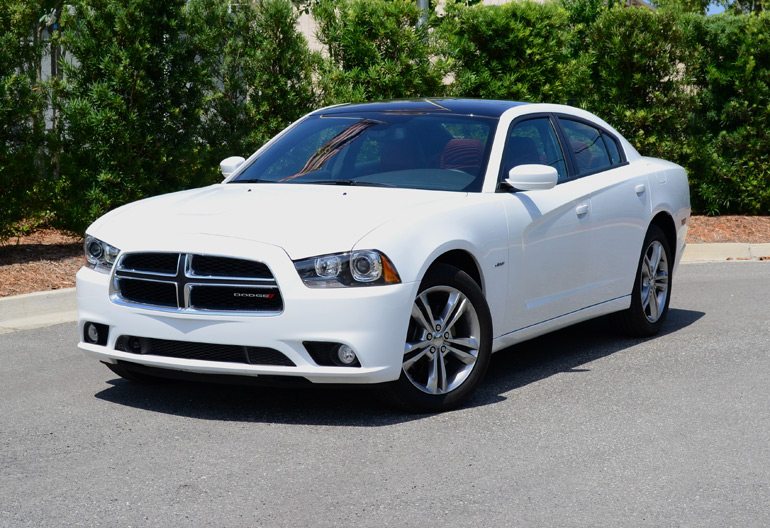 The new 2013 Dodge Charger, continuing to carry its distinct design first introduced in 2011, keeps the forward momentum going as a highly sought-after sedan by many different spectrums of life. To continue its tradition of serving many different purposes in the automotive world, the 2013 Charger gets more power in its V6 powertrain and updated graphics within the praised touch-screen infotainment system.

Having had a chance to drive the new 2013 Dodge Charger R/T on a long highway trip it was reassuring to have all 4 wheels powered through a new all-wheel-drive system option. The 5.7-liter HEMI V8 engine, now touting 370 horsepower and 395 lb-ft of torque, proved to be up to the job of propelling all 4,253 pounds of the large 4-door sedan with confidence. In the R/T trim, placed just below the performance oriented SRT8 model and above the V6 powered SXT and SE trims, is an excellent compromise giving way to load up many desirable luxury features yet allowing you to keep an economical state of mind. 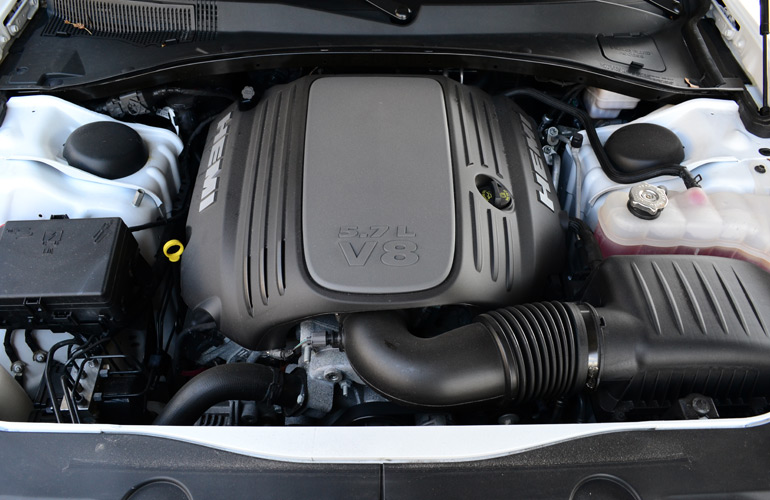 The 2013 Dodge Charger R/T Max AWD has its own unique character where it mostly keeps all 4 wheels firmly planted at the mercy of traction and stability control. I found that my drive in the new Charger R/T AWD had its shining performance moments on the highway and around town with more than enough power to keep a smile on my face. Though, the Charger R/T’s all-wheel-drive system proves to be beneficial in keeping the rear end in line on abrupt acceleration out of a turn considering how there is a delay in the traction and stability control intervening to keep you out of the nearest ditch. 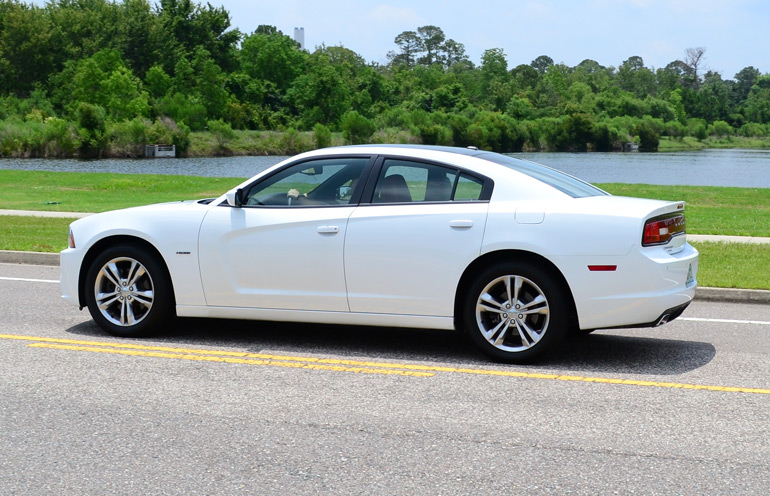 Although the new Dodge Charger R/T is not as daring as the SRT8 model, being short about 100 horsepower, it still holds its own to give the driver a complete and competent package for having a bit of fun and respectable performance. 0-60 mph time comes in around 5.4 seconds, pretty quick by most standards for a discrete-looking sedan. The Dodge Charger R/T AWD’s weight is reiterated each time you push its lateral limits but remains controllable provided stability control is left on. Probably one of the better aspects of the performance numbers is that they are attainable while you can get up to 25 mpg on the highway for the Charger R/T rear-wheel-drive model. For my Charger R/T AWD model the mpg figure is slightly diminished to an estimated 15 mpg city and 23 mpg highway. 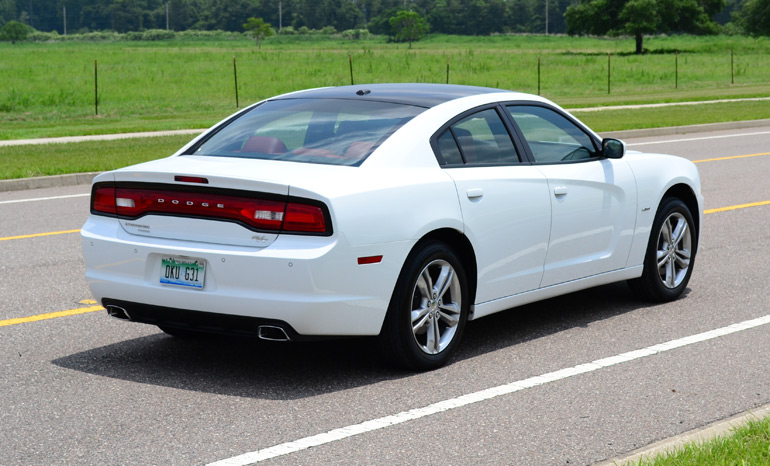 During my drive through the swampland-surrounded and heavily police-patrolled roads of north Florida, I saw an average of 24.3 mpg. Jumping on the interstate the fuel figure quickly diminished to 21.7 mpg traveling mostly above 70 mph. In stop and go traffic I was able to squeeze out about 16.5 mpg. Cylinder deactivation worked great allowing 4-cylinder mode to carry through a good amount of throttle input to limit switching back and forth. The new deactivation mapping in the ECU for the Charger R/T is remarkable in getting the best efficiency out of the large HEMI V8 engine. Moreover, cylinder deactivation switchover is hardly noticeable and virtually vibration free. 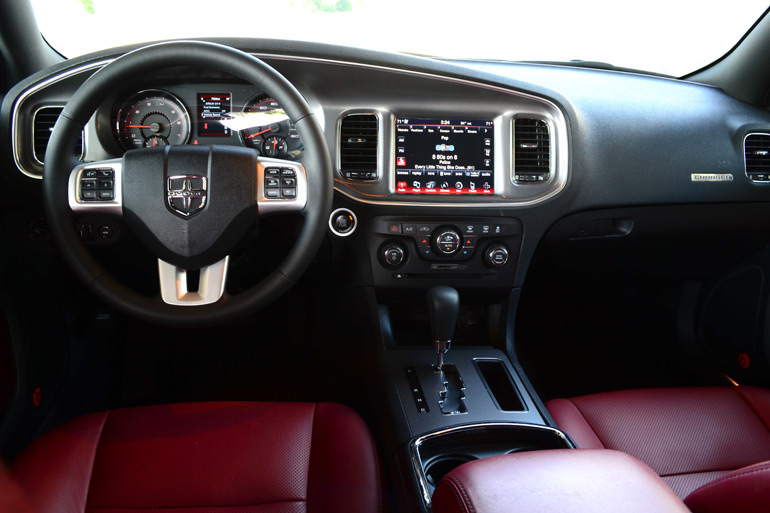 Ride quality and damper tuning is pretty good for a sedan of this size. The balance between a sporty attitude and smooth ride is spot-on. Road noise is kept to a minimum while the dashboard controls, most of which are accessible through the 8.4-inch high-resolution LCD touch-screen Uconnect system, makes you feel intellectually connected. The latest graphical update for this year captivated me with life-like highway exit image representations utilizing through the Garmin-based GPS navigation system. Additionally, all controls responded as smooth as an iPhone 5 fresh out of the box. 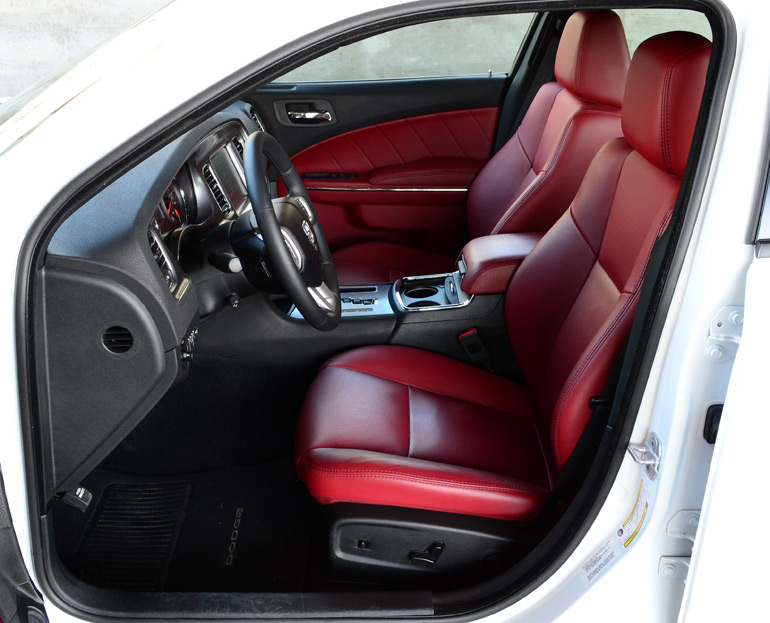 The interior of the new Dodge Charger R/T gives you a slight contrasting edge where you have the availability of perforated leather seating surfaces in delectable colors. My 2013 Dodge Charger R/T featured red leather seats, heated and ventilated up front and rear heated outboard seats. A thick leather-wrapped and heated steering wheel adds a nice literal touch for your hands just as the decently bolstered front seats do to your kidneys. Of course as you would imagine, space is plentiful in the new Dodge Charger with ample room for 5 adults and no noticeable compromise in cargo capacity. No wonder the police love this vehicle in the R/T trim, which happens to be the same powertrain configuration as highway patrol and traffic police-issued Chargers.

Styling of the Dodge Charger, even since its slight redesign for the 2011 model year, has its own controversial classic looks that attempt to mimic the original Charger. The side body panels routing back to the unique LED tail lamps all pay homage to the original Charger styling yet have nice modernistic touch. The 2013 Dodge Charger remains to be unmistakable and the R/T model only adds to its sporty character with 18-inch alloy wheels and a new accented darkened roof. To make things really stand out, the R/T Charger can be equipped with an optional Road & Track package featuring 20-inch wheels, spoiler, black grill, paddle shifters, and performance calibrations for the engine and transmission (sport mapping modes). 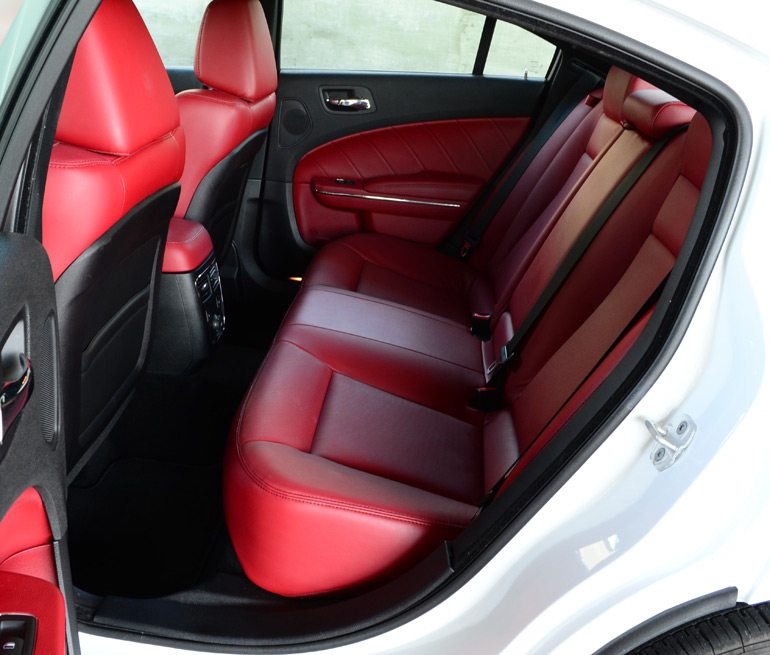 One of the more attractive aspects of the new 2013 Dodge Charger R/T remain to be its pricing where you get a feel for its true value. Being that the new Charger R/T is already a versatile vehicle that you could commute in one day, take the kids to school and even take it to an autocross another day, makes for a vehicle that serves up many purposes without a high price tag. A respectable starting price of just $26,295 will get you the base V6 SE-trimmed Charger while the Charger R/T brings the base price to just $29,995.

Tacking on several options but not going too far will quickly bring the 2013 Dodge Charger R/T AWD model to $41,490 plus $995 destination charge, which is the price tag of my test vehicle. From there you still have room to add the Road & Track package and even move into the SRT8 territory boasting 470 horsepower and a starting price of $45,450.

Either way you have it, the new 2013 Dodge Charger may be the nicest rental car in its base trim form, you will still take pleasure in its ability to offer something for everyone in the realm of a mid-sized affordable sedan with flare and performance.