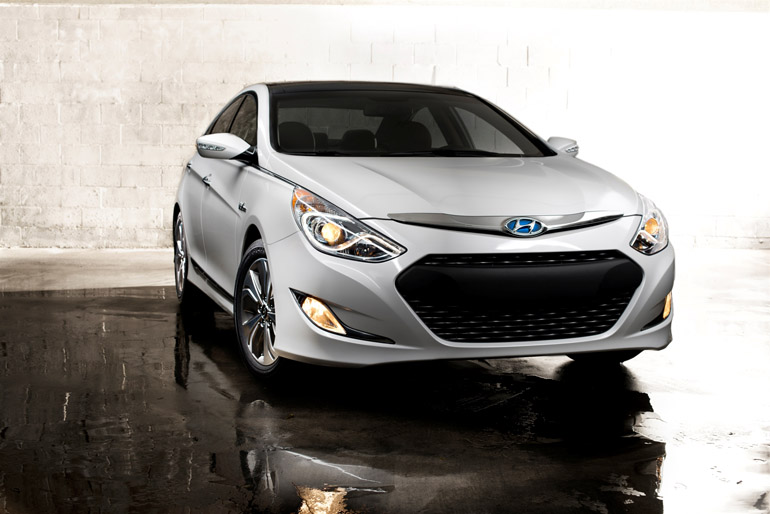 The new 2013 Hyundai Sonata has pierced into its segment as a respectable sedan that offers the same variations that its direct competition has touted for many years. Now with the new Hyundai Sonata Hybrid, adding to the base 4-cylinder and turbo offerings, attempts to offer consumers that alternative to saving a bit more fuel much like the hybrids we have grown to admire from Japanese manufacturers.

The new 2013 Hyundai Sonata Hybrid attempts to build on its proven chassis but takes many of its traits and adds uniqueness to the design that signifies the Hybrid variant from the rest of the line. Powered by a 2.4-liter 4-cylinder engine with 159 horsepower and 154 ft-lbs. of torque combined with a 47 horsepower and 151 ft-lbs. of torque electric motor, the Sonata Hybrid’s total 199 horsepower output has enough oomph to make its mid-sized sedan duties with some substance. The powertrain, as intricate as it is, is mated to a 6-speed automatic transmission. In the scope of mainstream hybrid sedans, the Sonata is one of the rare offerings to direct power through a transmission with gears instead of a CVT (Continuously Variable Transmission) unit. Of course being an enthusiast, this is one of the few appreciated aspects of the new Sonata Hybrid considering how CVTs sap the fun out of just about any vehicle where the driver has a slight desire to push it near its limits. 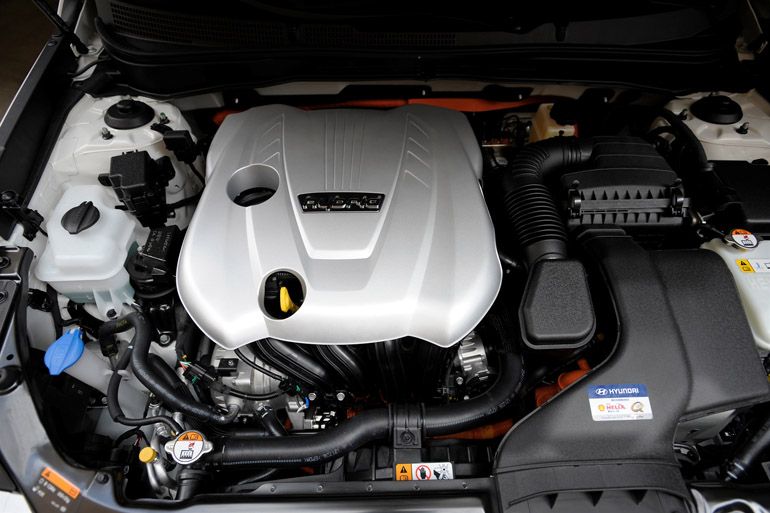 Power comes on smooth when the engine and electric motor or working in sync. You can expect 0-60 mph times to come in around 8.5 seconds. Although the Sonata Hybrid constantly adapts to your driving style, it suffers from a few hiccups within the hybrid drive system. Many times the transition between the electric motor to the gas engine, although smooth, is rather indecisive. The Sonata Hybrid is so indecisive in its electric motor-to-engine transitions that you lose the confidence of jumping into traffic or taking any remotely daring merges onto highway roads from exit ramps. Possibly, the hiccups can be resolved with reprogramming. Nevertheless, the new 2013 Hyundai Sonata Hybrid has this shortcoming looming over its over-all driving experience but still manages to muster out a respectable fuel consumption figure. 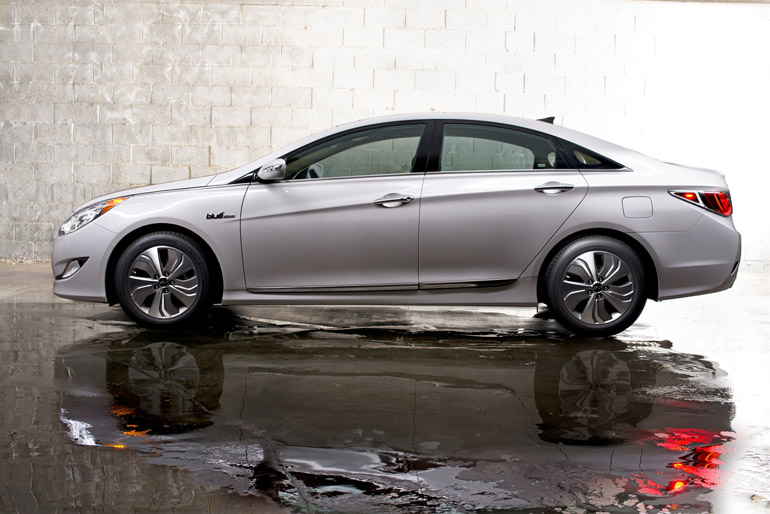 Other aspects of the new Hyundai Sonata Hybrid’s performance prove to keep the driver out of the decision making of how the power and efficiency is managed. Basically, there is no sport mode or eco mode, which in some cases it would make a considerable difference in how energy is managed. However, you do have an eco-mode for the ac/heater system and the blue drive dashboard indication that absolutely does nothing from my observation. To the benefit of Hyundai’s hybrid system, it does have long instances of switching over to electric power near highway speeds. At times running around 55 mph to 65 mph the system indicates full electric power if you are not accelerating. Of course sustaining that speed on an even surface would immediately prompt a switch-over to gas engine power, but the system slips in times where the electric motor runs solo to maintain such a speed when costing down a hill or detecting a progressive decline of speed. 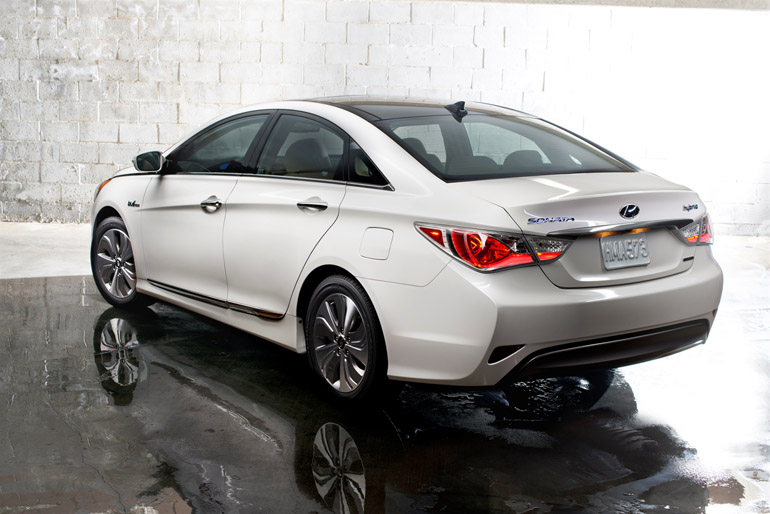 My week with the new Sonata Hybrid never yielded its true mpg EPA estimate of 40 mpg highway. Though, I was able to match the EPA estimated 36 mpg city figure getting about 35.8 to 36.2 mpg around town. On the highway I saw the best figure of about 37.4 mpg, well shy of that 40 mpg figure. Regenerative braking works with a seamless nature to charge the new next-generation lithium polymer battery in conjunction with the engine at computer-initiated times. The new battery comes with a lifetime battery warranty – more than likely a major deciding factor for the longevity of such a vehicle and proven durability. 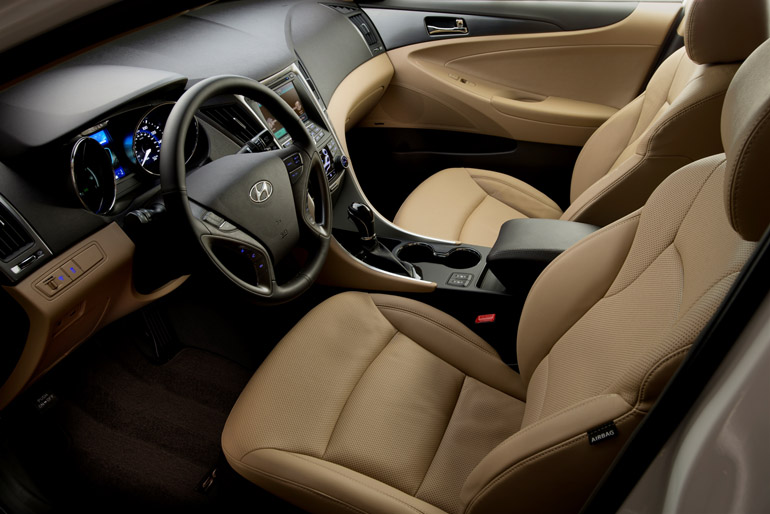 Ride quality and its handling are on par for what you would expect from a mid-sized sedan. The dampers are well-tuned to smooth-out the fuss of uneven road surfaces and adapt well to lateral motions. The Sonata Hybrid proves to be a bit sportier in its handling than other comparable Hybrids and even many regular gas-powered sedans in the same class. 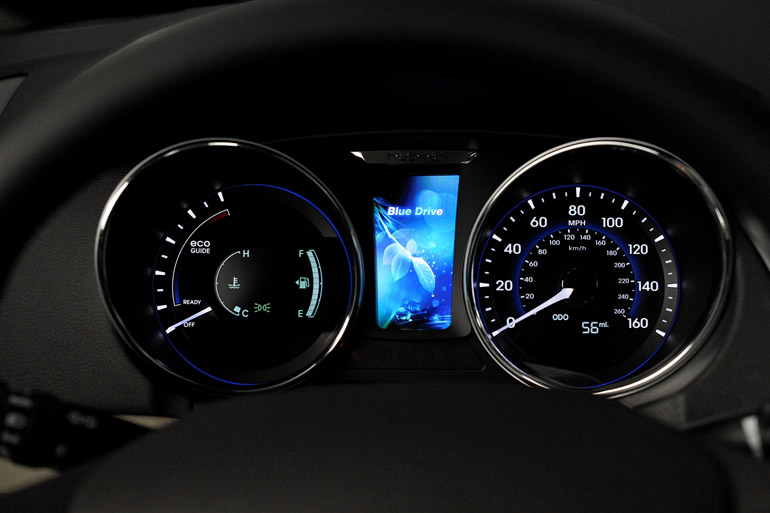 The leather seats in my 2013 Hyundai Sonata Hybrid proved to be somewhat supportive and comfortable on long trips. There is a slight amount of bolstering on the front seats, just the right amount expected from a mid-sized sedan. Instrumentation is brightly lit and easy to read. The infotainment system of the new Hyundai Sonata Hybrid mimics much of the Hyundai line of vehicles fed through a 7-inch LCD touch-screen. The GPS navigation system is straight forward as well as the vehicle settings accessed through the instrument cluster center color LCD screen.

Exterior styling, taking a slight departure from normal Sonata trim levels, goes in a different direction for the Hybrid model. The front fascia is reworked with the only similarity being the over-all headlight shape and hood. The rear also has traits that signify the Sonata Hybrid and capped off with highlighted-blue Hyundai emblems up front and in back. The coupe-like sloping roofline demonstrates the Hyundai Sonata’s aerodynamics, which aid to keep wind noise down at highway speeds and an exceptionally low drag coefficient of 0.25. The new Sonta Hybrid basically slips through the wind like freshly sharpened knife does through hot butter. 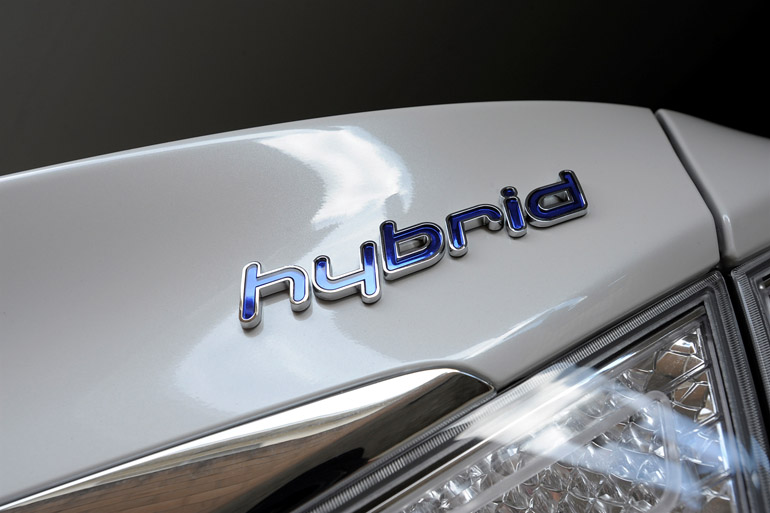 The new 2013 Hyundai Sonata Hybrid Limited, including most Sonata options as standard features, attempts to place its pricing in a competitive position. Pricing for the new Sonata Hybrid starts at just $30,550 and topped out with my test vehicle at just $32,460 including a $795 fright and handling charge, $1,100 panoramic sunroof w/ power sunshade, iPod cable and floor mats. A comparable Toyota Camry Hybrid will start things off around $26,140 but can quickly climb up to the Sonata Hybrid’s price point and beyond it once several comparable options are added on.

The new 2013 Hyundai Sonata Hybrid has certainly claimed its position as a choice among main-stream hybrid sedans on the market. It is well deserved of a look from those in the market for an affordable midsized hybrid sedan with a long list of standard features and a rock-solid warranty on the vehicle and new hybrid battery.