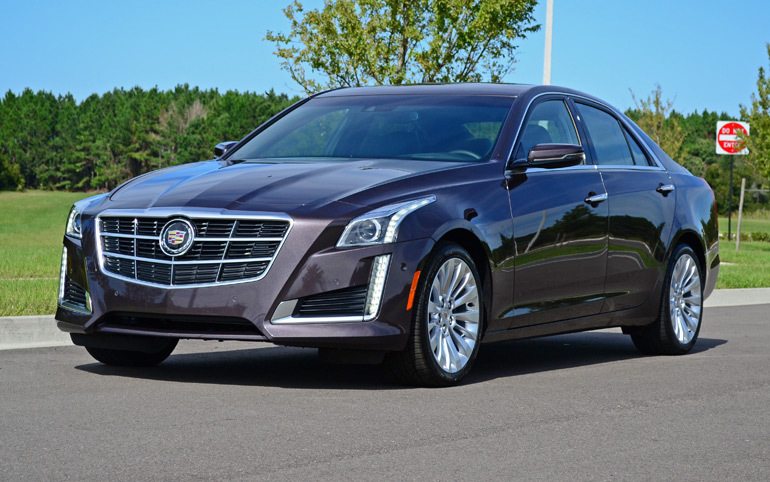 Cadillac’s embarkation to inject the automotive market with segment-leading vehicles is getting well-deserved attention recently, especially with the introduction of the all-new CTS. The doubt as to what vehicles the all-new 2014 Cadillac CTS is attempting to chase down has met its demise. Let it be known that it is anyone’s game within the midsized luxury sports sedan segment as the battle commences and the CTS looks poised and in the best position ever to endure the good fight.

Fresh off of the design heels of the Cadillac Ciel concept car, larger XTS and smaller ATS, the all-new CTS receives the brands new signature language in its exterior and interior dashboard design elements. Being unmistakable as a Cadillac, the CTS still has its own unique exterior expression starting with its vertical LED accent day-time running lights out front, short front wheel overhangs, a longer wheelbase than the outgoing model and a V-shape sculpted rear-end proving to closely mimic that of the new XTS. The new larger exterior dimensions translate well into a re-worked interior to contend with its direct German competitors. 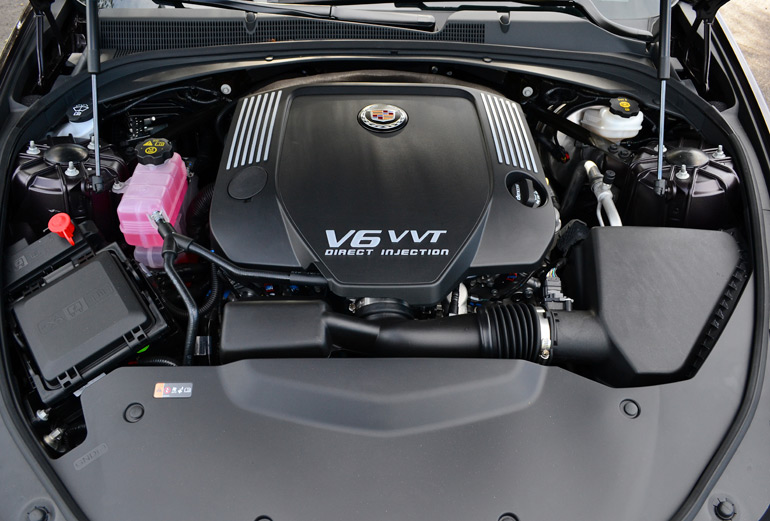 The all-new 2014 Cadillac CTS inspires to endure through its contest with the initial offering of 3 different powertrains starting with GM’s 2.0-liter turbocharged 4-cylider producing 272 horsepower and 295 ft-lbs. of torque in the base trim levels. Moving up from the base model the CTS offers the 3.6-liter V6 unit producing 321 horsepower at 6,800 rpm and 275 ft. lbs. of torque at 4,800 rpm, as found in my CTS 3.6L Performance Collection test vehicle. Topping out the current CTS line is the V-Sport trim featuring a twin-turbo 3.6-liter V6 with an astonishing 420 horsepower and 469 ft-lbs. of torque. Of course with the rumors of the forthcoming performance-king CTS-V potentially touting over 560 horsepower (rumors for now), we shall reserve our anticipation and not takeaway from our admirable experience in the 3.6-liter V6 CTS. 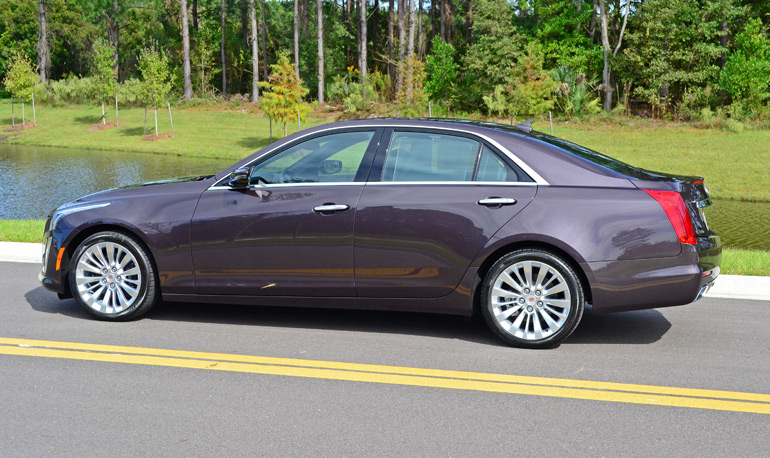 The mid-sized luxury car segment has always been a brutal battle while the likings of the new BMW 5 Series, Benz E Class and even the Audi A6, have long won over the hearts of a wide range of consumers. Cadillac, with their new larger CTS entrant to fulfill the preverbal luxury sedan gap, aims directly at these competitors and surely has the right equipment to finish the race knowing it gave its all.

In the department of the all-new 2014 CTS’ powertrain, Cadillac has brought out their full arsenal having engine choices that remain to be solid performers within their 3-tier selection. I can contest to the 2014 Cadillac CTS 3.6-liter V6 being a solid mid-range choice as it pumps out good power through the rear wheels for 0-60 mph runs in just 6.3 seconds. With my CTS 3.6L Performance Collection trim, slotted at the mid-range of engine offerings, it adds a few performance goodies in the form of front Brembo brakes, larger 18-inch aluminum wheels shod in Pirelli P-Zero Nero all-season high-performance fun-flat tires, dual exhaust and the famous magnetic ride control dialed in with Tour and Sport modes. 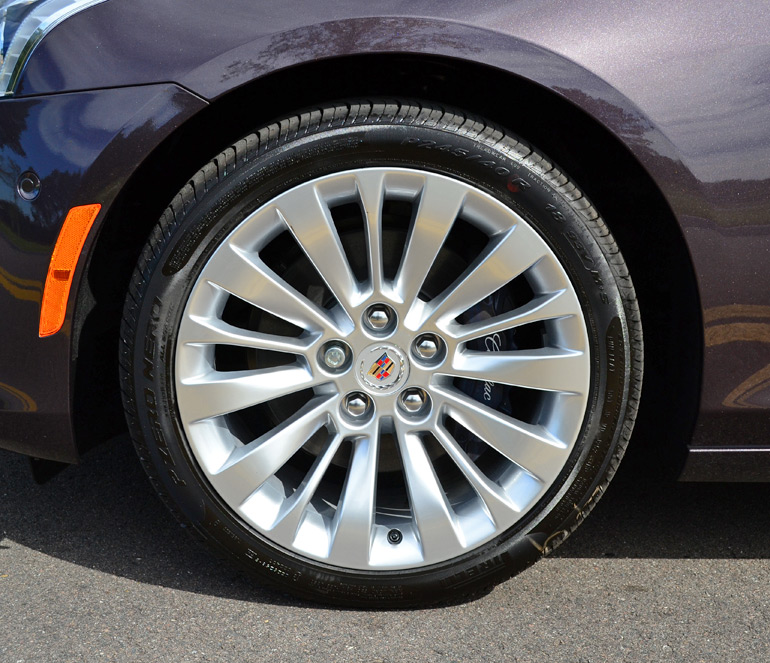 On the road, the new 2014 Cadillac CTS 3.6L Performance Collection is well-suited for just about anything you can conjure for American road pavement and European streets. The astonishing magnetic dampers make the best of the sport-tuned suspension setup dialed in to minimize body roll, bounce, rebound – all coming together for a compliant ride. The new 2014 CTS is smooth, and its consistently adapting suspension hardly ever upsets the body with unwanted motion. The Pirelli P-Zero Nero run-flat tires do add an initial firmness to the ride but the suspension works it all out when reaching local-road cruising speeds and beyond. Lateral grip is surprisingly good with very little body roll and a snappy rear-end oversteer kick-out that the stability control quickly nips in the bud. The new 2014 CTS could easily be placed on a local autocross track and have no issues keeping up and occasionally outrunning many stock-class entrants. The addition of an electronically controlled limited slip differential, as found in the new CTS V-Sport, will only add to the CTS’ ability to handle like enthusiasts expect from a true luxury performance sedan.

Power directed to the rear wheels from the 3.6-liter V6 is consistent and smooth as well as the shifts performed by the new 8-speed automatic transmission. The new 8-speed transmission, a new Japanese-derived unit, never disappoints in the selection of a proper gear under most demanding situations. Up-shifts come on somewhat soft, even in sport mode. The use of the magnesium steering wheel paddle shifters add a bit of sport but tend to be redundant due to the vast selection of gears (8). Manual shifts are mostly unhurried, but not to the point of being sloppy or at of a loss of power to the rear wheels. Rev-matched downshifts are executed perfectly without upsetting the trend of deceleration in most circumstances. Having a total of 8 forward gear cogs and a perception of carefully matching the V6’s powerband to the gear ratios, makes for a decent performer all without much sacrifice in fuel efficiency. EPA estimates for the new 2014 CTS 3.6L are 18 mpg city and 29 mpg highway. I saw a steady 29.8 mpg on the highway at 65 mph and 17.1 mpg city with a combined 23.5 mpg. 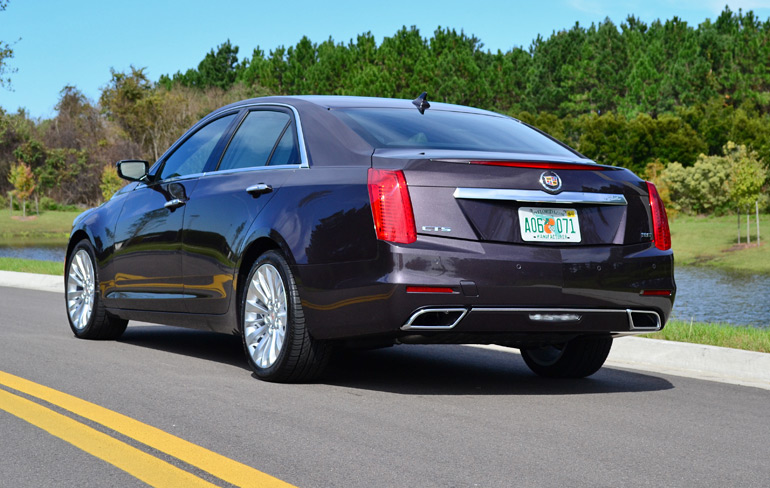 Slowing the 3,825 pound sedan is a simple expression and sometimes a thoughtless process thanks to the optional automatic braking with automatic collision preparation. The Brembo brakes up front, part of the 3.6L Performance Collection trim level, aid to not disappoint when it comes time to slow things down. The automatic braking system utilizing the front and rear sonar sensors are able to detect the vehicle closing in on objects and apply the brakes at full ABS lock-up, which I was actually able to experienced when backing to close to my garage door. Even though I was prepared to stop just a foot or two before plowing into my garage door while backing up, the CTS’ auto brake system took the situation on its own and applied aggressive force to the brakes where you could hear and feel the ABS pump pulsating -bringing the car to an abrupt stop. Combined with other proactive safety features, such as the optional lane departure warning and forward collision warning feed through the standard driver awareness driver’s seat (vibrates the seat bottom sides or middle, dependent on various proximity alerts) the new CTS puts active safety in the front seat, literally. 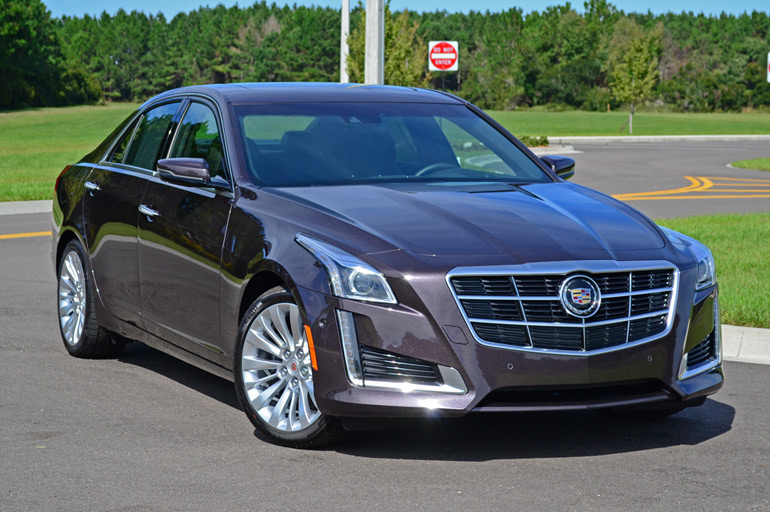 Other notable safety features on the new 2014 Cadillac CTS 3.6L Performance Collection are driver and front passenger knee airbags, auto-dry brakes (presses brake pads against the rotor to swipe water at various time when rain is detected), and the optional active belt tightening for driver and front passenger (tightens belt slack after driving off or in the event of emergency braking or lateral maneuvers). 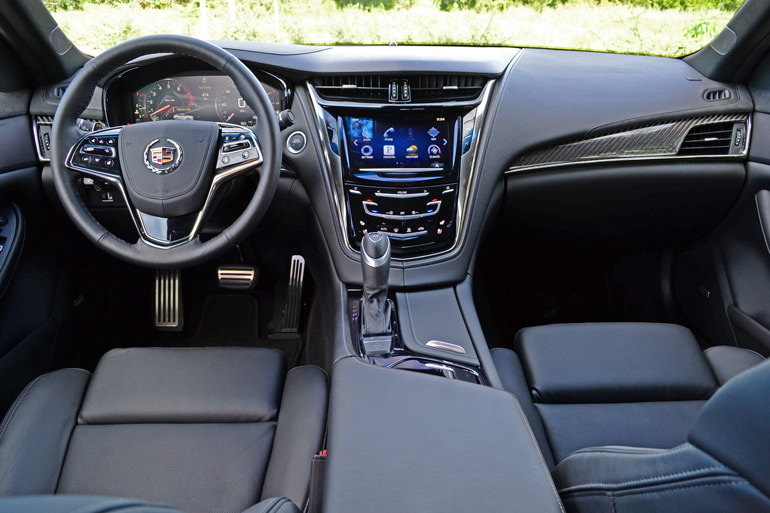 In terms of technological advancements aside from the passive and active safety blanket, the new 2014 CTS incorporates the new CUE (Cadillac User Experience) infotainment system. The system includes a high-resolution 8-inch touch screen that supports drag, swipe, pinch (zoom in and out) and rotate gestures just like most popular smartphones and tablet devices on the current market (iPad, iPhone etc.). The system in-all works to entice drivers and passengers to really interact with the CTS’ features but somewhat falls short with lack of quick response that is expected in something like the newest iPad. Basically, the lightning fast response that some of us are accustomed to in a new iPad or iPhone, is just not there. It is not to say that the CUE system is slow, it is just not as snappy as you would expect in most inputs. However, the CUE system’s haptic feedback aids in your confirmation of buttons being depressed while the proximity sensor is an added benefit of using the 8-inch screen’s real-estate wisely with pop-up menus and multiple functions within many menu sets. The use of multi-touch gestures for flipping to additional menu sets are not always intuitive for the driver to perform while driving, which is in my opinion not advisable when hauling down the interstate at 70+ mph. To the benefit of the CUE system, the use of all capacitive touch-sensitive buttons down the center console is an experience much better than other comparable systems. For the most part, the touch controls have seldom cases of mistakenly depressing unwanted buttons. Nevertheless, some controls do take a while to get used to but the learning curve is relatively short.

The motorized center dash compartment concealing an extra USB port is more of a novelty to show off to your friends as is the motorized cup-holder door. A nice touch for sure, but it begs for enthusiasts to ask how much weight would have been saved without those extra motors and how long will they last. 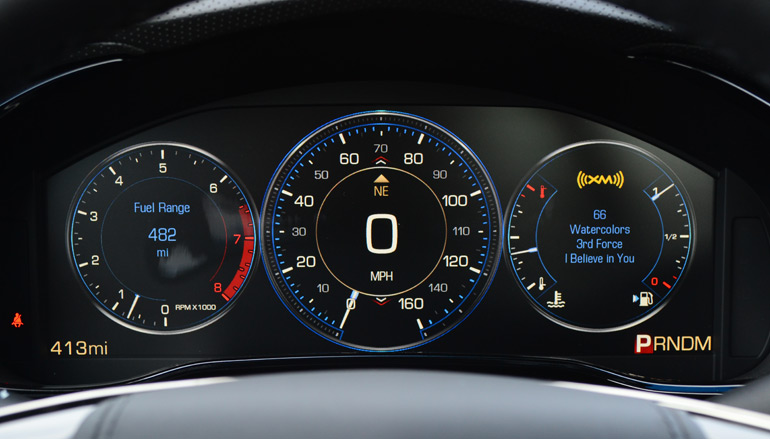 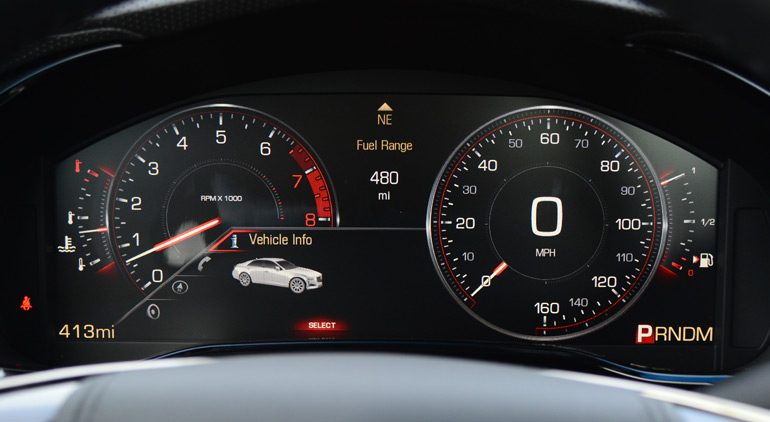 The dashboard is clearly laced with technology, and aside from the CUE system, the new 2014 Cadillac CTS’ optional 12.3-inch reconfigurable color LCD gauge cluster adds to the equation. The new configurable LCD cluster has many setup options to display different variations of your gauges and information displays. The system is well thought out adding additional value and a luxury aesthetic to the interior tech experience. There is a slight assimilation of mystification that forms in your mind when configuring the cluster but your choices quickly become narrowed down to two gauge setup options. Combined with the color heads-up display, the dashboard animates a welcoming Cadillac logo and brightly comes to life upon starting the ignition of the new CTS. The dash is almost too bright at night requiring you to quickly dim the display manually. 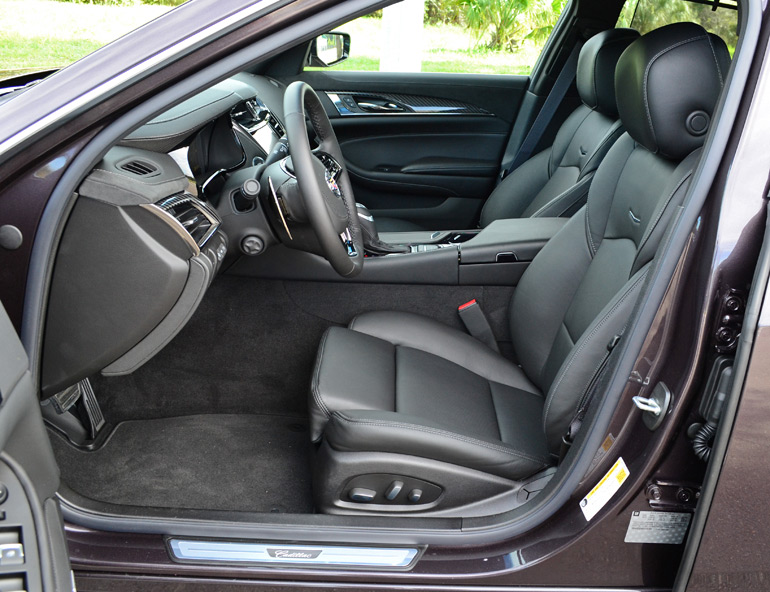 Interior comfort has been improved while the over-all interior space almost remains the same as the outgoing model. Repositioning of the seats give you much more usable room in the new CTS with reshaped optional heated and ventilated sport seats up front found in my CTS 3.6L Performance Collection trim. The perforated leather seats add good bolstering combined with lasting comfort on long trips.  The chiseled trunk space is also adapted to provide extra capacity where it counts for stowing large bags in a deep-bottomed space with 13.7 cubic feet sans any spare tire. 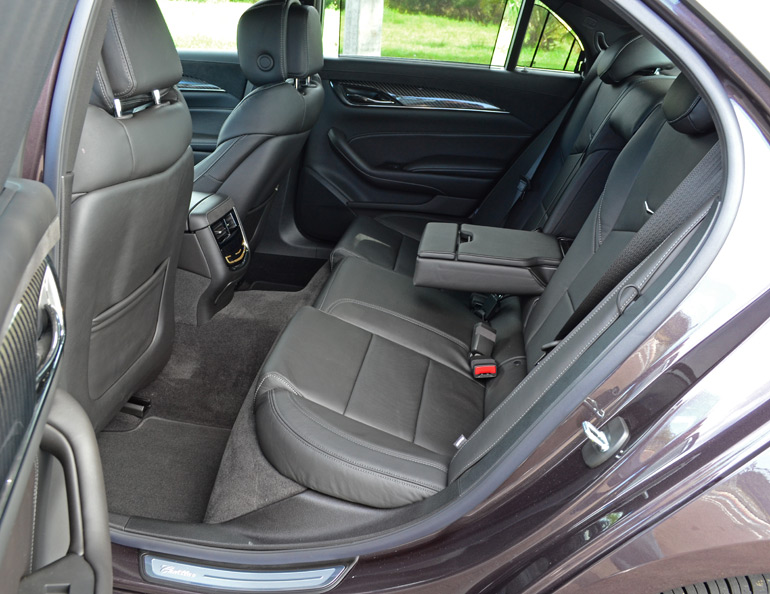 The all-new 2014 Cadillac CTS undoubtedly has set its eyes directly on its competition following suit in the area of performance, luxury, comfort and unique good looks. The new CTS has its own character as to not follow in the shadows of the German competition, which is a good thing especially when you consider its price tag. My all-new 2014 Cadillac CTS 3.6L Performance Collection loaded up with all available options came to an as-tested price of $66,080 including a $925 destination charge. The new 2014 Cadillac CTS with the lighter but potent 2.0-liter turbocharged engine in its base configuration starts at just $46,025. The current top-end CTS V-Sport is expected to tip the price scale to about $69,000. After driving the new CTS 3.6L we are eager to jump behind the wheel of the CTS V-Sport with the 420 horsepower twin-turbo 3.6-liter V6. Of course in the light of what we have experienced in the new 2014 CTS 3.6L, we cannot wait to hear the announcement of a new CTS-V. Until then, we conclude that the epitome of the American midsized luxury performance sedan is looking better than it ever has in more ways than one.