Five minutes. That is about how long it took to throw everything I thought I knew about hybrid-powered cars with CVT transmissions out the window. 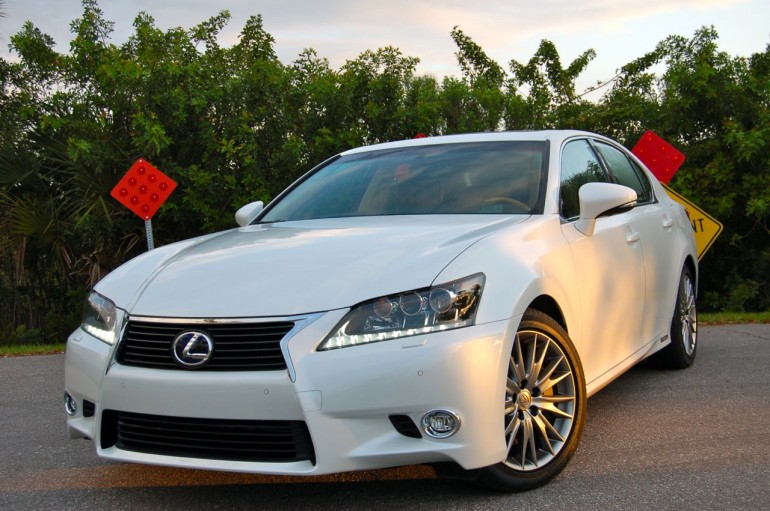 Although there are a few hybrids about to hit the market like BMW’s i8, Porsche’s 918, and McLaren’s P1 that will completely redefine the concept, my long standing impression is that manufacturers have strived to attain excellent fuel economy while allowing performance, and in many cases aesthetics, to be placed on the back burner.

Granted my experience with hybrids has been limited to test-drives, I did own a compact SUV that employed a buzzy, whiney, awkward “shifting”, prone to failure and expensive to replace CVT transmission to send power to the front wheels. My fingers-crossed experience with that truck had me swear off purchasing another vehicle with a CVT. In a taxonomy of “cars to own someday,” a hybrid-powered CVT equipped sedan would fall somewhere between the Yugo GVC and a rusty Cadillac Cimarron.  Five minutes behind the wheel of the 338 horsepower, 31 combined mpg (29 city/34 highway), 2014 Lexus GS450h had me rethinking the list.

The 2014 Lexus GS450h combines the world’s first direct-injected Atkinson-cycle 3.5 Liter Four Cam 24-Valve V-6 engine and dual hybrid-motor system with a silky smooth Electronically controlled Continuously Variable Transmission (ECVT), allowing the car to reach 60 mph in only 5.6 seconds. Even more amazing than the acceleration is the civilized manner in which it does it. 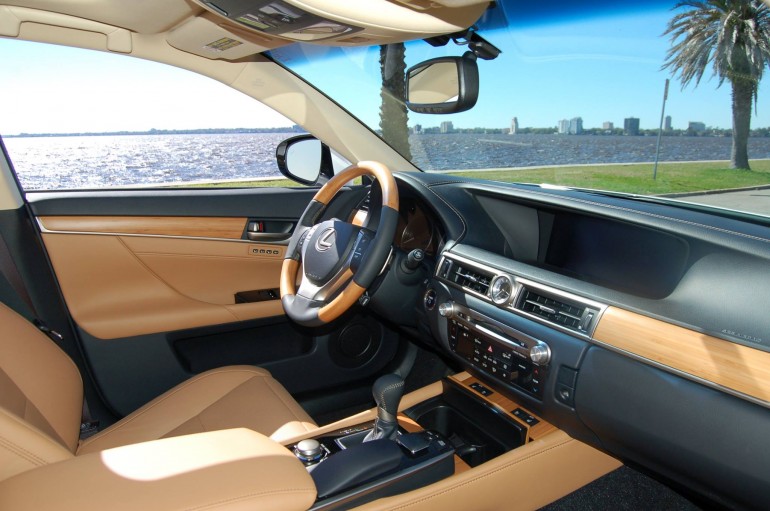 The GS450h is so refined that even my lead foot and Sport + mode driving hardly coaxed a complaint from my normally vocal passengers. Even when driven fast, accelerating quickly, and turning sharply, the Adaptive Variable Suspension (AVS) helped keep the Lexus poised, retaining complete composure. Over the week that I reviewed the GS450h the most popular response from the backseat was, “Dad, this car is so smooth.” And believe me, that is amazing.

The exterior styling of the Lexus GS series is, to me anyways, a wonderful combination of luxury and sport. The rich “Starfire Pearl” paint has a soft sparkle in direct sunlight and comes to life under the glow of the lamps in dimly lit parking garage.  The 19” 9-spoke alloy wheels complement the paint color and are just the right diameter for the dimensions of the car. The aggressive front fascia houses the LED headlamps with pop-up washers, LED daytime running lamps and a dynamic auto-leveling system that adds a nice level of visibility during evening rides.

Starting the 2014 Lexus GS450h is almost as entertaining as driving the car. The push button start begins an elaborate sequence of movements and system checks. The heated and ventilated 10 way adjustable perforated leather power front seats return to the position where you last set them and the bamboo and leather wrapped heated steering wheel lowers itself into a comfortable driving position. The 12.3-inch high-resolution screen that projects the backup camera images and navigation/entertainment system comes to life, eventually settling on your favorite pre-set combination of navigation, audio, and systems information. On the outside of the car, the LED headlamps run through an adjustment start-up progression that, when projected on my garage door, reminded me of an orchestra director, waving the baton in preparation of a symphonic piece. 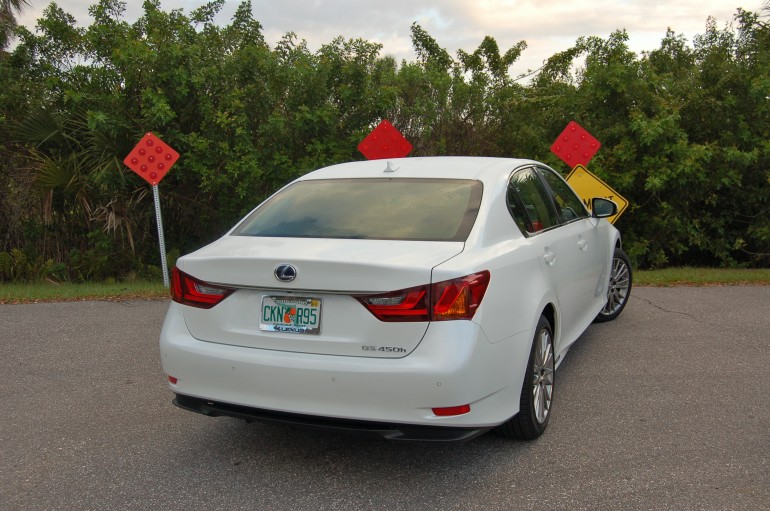 The week that I was reviewing the 2014 Lexus GS450h coincided with my children’s spring break. For a few months, we had been planning a trip from Jacksonville to Cape Canaveral, Florida to visit the Kennedy Space Center. And although the Lexus is great around town, whether I was picking up the kids from school, driving the family to church, or getting groceries, it was during the 300 mile round trip that the Lexus really shined.

The 2014 Lexus GS450h loves the highway. The heads up display projects pertinent information on the windshield, allowing your eyes to stay fixed on the road. I appreciated the way the display interacted with the cars navigation system, projecting turn-by-turn information on the windshield. In combination with the buttons on the steering wheel, rarely an instance requires the driver to take their eyes off the road. The blind spot monitors and rain sensing automatic wipers act as a thankless co-pilot, alerting you to surrounding traffic and flicking the wipers on and off as needed.

The vehicle is extremely intelligent, assisting the driver in almost every area. The Vehicle Dynamics Integrated Management (VDIM) with Vehicle Stability Control (VSC), ABS brakes, brake assist, and Traction Control (TRAC) continuously monitor your driving conditions, making millions of adjustments to keep you safe, and in control of the vehicle at all times. 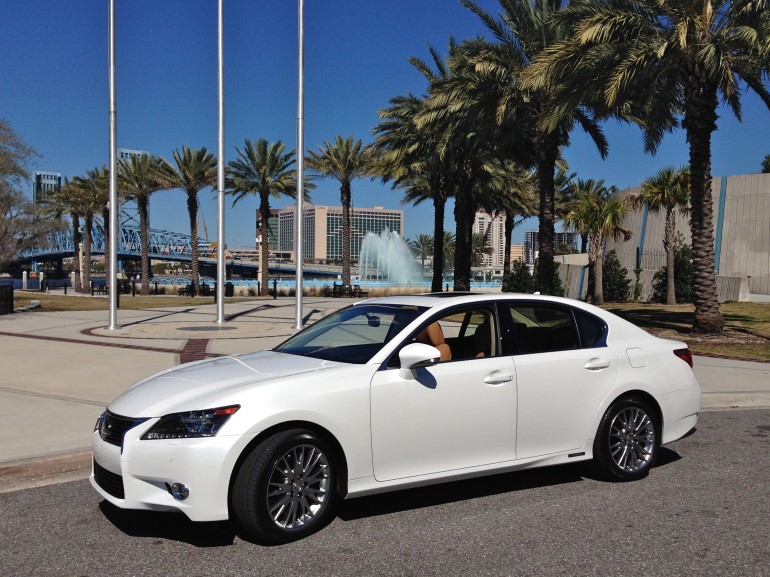 On the return trip from Cape Canaveral, there was a back up on 95 north, close to downtown Jacksonville. If you live in Jacksonville, I doubt this comes as much of a surprise. As I navigated the stop and go traffic, the Lexus, without any prompting on my part, placed itself in EV (electronic vehicle) mode. The hybrid motor, in combination with the CVT transmission, was smooth off the stops and extremely quiet. I opened the sunroof, turned up the music streaming from Bluetooth of my iPhone, and made the best of it. Even more soothing than the comfortable car and crystal clear audio, was the fact that I was saving gas and money!

The 2014 Lexus GS450h is an amazing car. The combination of good looks, great performance, luxurious interior, and incredible gas mileage make it hard to beat. 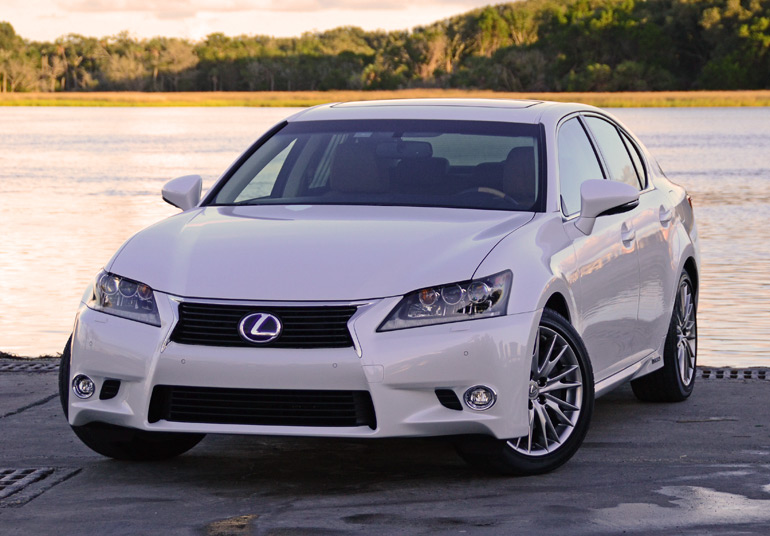 Lexus has projected an aspect that intrigues many by combining their best hybrid vehicle efforts with a nice injection of stunning performance and true luxury, all in an appealing package that is the GS 450h. The Lexus GS 450h is the latest hybrid offering for the GS line of vehicles. It started off life as a surprising performer, shattering the conception that a hybrid had to be slow and resemble a space-age vehicle. With the GS 450h, Lexus combines the appeal of the GS, as the brands highly praised luxury sports sedan, and then claims its place as the fastest trim level while besting its fuel consumption thanks to an astonishing advanced and compliant hybrid system. 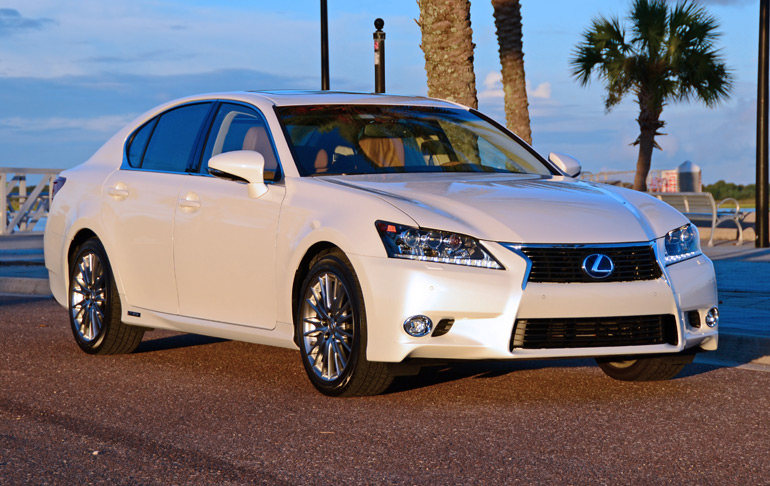 With Lexus setting out to keep buyers intrigued, the GS 450h serves up some extras in the scope of what a luxury hybrid should be about and much of that lies within its stout performance from its 3.5-liter V6 and electric motor drivetrain, combining in a virtually seamless effort to save fuel but deliver on road prowess. The direct-injected 3.5-liter Atkinson-cycle V6 engine is already smooth with its power delivery, but things get buttery smooth when adding in the factor of the electric engine working to produce instant torque and on-the-fly power generated to the hybrid battery pack. Transmitting power through what appears to be one of the best Continuously Variable Transmissions (CVT) on the market, the word slouch fades from your vocabulary. Zero to 60 mph time comes in at just 5.6 seconds, a feat that you would be proud to boast about in your new “hybrid.” Those statistics go over well at the dinner table, sparking amazing conversations. You can only imagine the eyebrow-raising competitions that commence after speaking of such words. 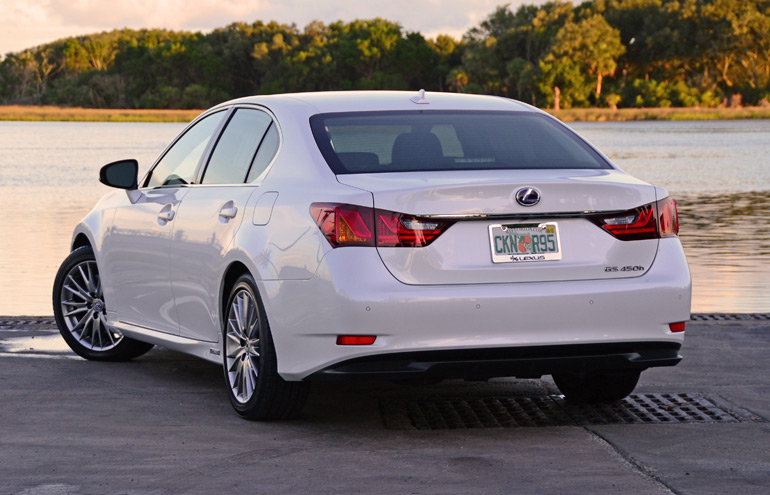 After spending a week with the 2014 Lexus GS 450h it is evident on how vehicles like the Toyota Prius have paved the way for Lexus to produce such a vehicle that does all that it is intended to do and without any faults. The EPA estimated 29 mpg city and 34 mpg highway figures are real-world estimates that may be bested on occasion. On my drive from Jacksonville, FL up interstate 95 I found times where I could muster out 36 mpg and then get nearly 39 mpg cruising the creeping streets of our destination on Georgia’s Jekyll Island. All of this magic of having the best fuel conception numbers of just about any luxury sports sedan on the market, the Lexus GS 450h is a marvel in itself. The transitions from the V6 engine and propelling the vehicle from electric power alone are hardly noticeable. Not to mention, the system reacts quickly with no delays in power delivery even when you abruptly demand full throttle from crawling under only electric power. What Lexus has done with this advanced hybrid just works; to the benefit of saving fuel but without lacking in shear power output to please the most discerning enthusiast. 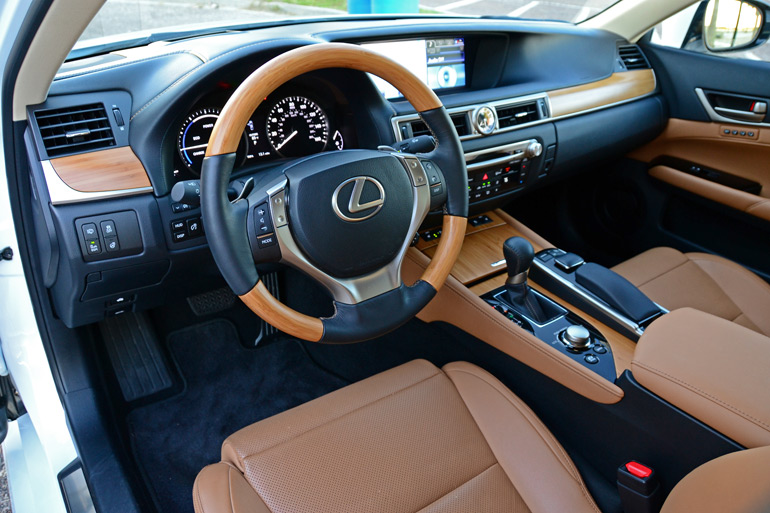 Indulging in the lap of luxury has never been so relaxing, knowing that you are doing a part to save the environment. Though, you would be doing your part to sacrifice a few bamboo trees by the looks of the lavish interior of the Lexus GS 450h, featuring bamboo trim that nicely accents the interior’s color theme and goal of aesthetically pleasing all occupants. The interior is nothing shy of spectacular and in true Lexus fashion the fit and finish is impeccable. Utilizing the abundance of luxury amenities from the heated and ventilated nicely-bolstered and perforated leather seats up front, to adjusting your own climate and audio system in the enjoyment of a shaded rear bucket seat, all play in tuned to truly living in the lap of luxury. 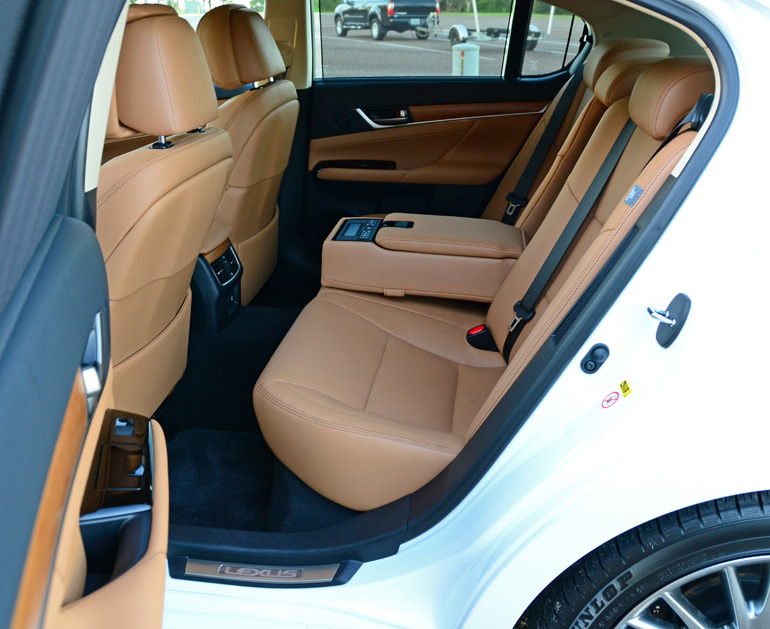 In the full spectrum of luxury hybrids, which is already a unique and extremely small segment to begin with, the 2014 Lexus GS 450h exudes the best efforts of what a well-defined luxury brand with a strong foundation in the hybrid tech field is truly capable of doing. Despite the lofty as-tested price of my near-fully-loaded Lexus GS 450h at $70,000, Lexus has uncovered remarkable expressions of eco-mindedness with a sweet luxury flair, and I like it a lot.