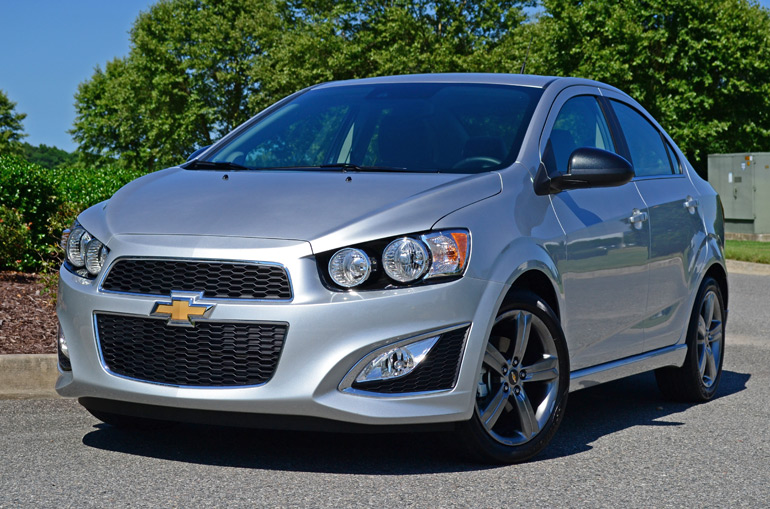 The new Chevrolet Sonic has been an attractive addition to the Chevy lineup for their endeavor to paramount the subcompact genre in the automotive market. Offered in several trim variations, in either a 4-door hatchback or 4-door sedan, the Sonic stays firm in serving up a decent package in a small subcompact wrapping. New for the 2014 model year is the Sonic RS, with a sportier character where you can opt for a 6-speed manual mated to its 1.4-liter Turbocharged 4-cylinder engine, which I had a chance to have a little fun with for a few days. 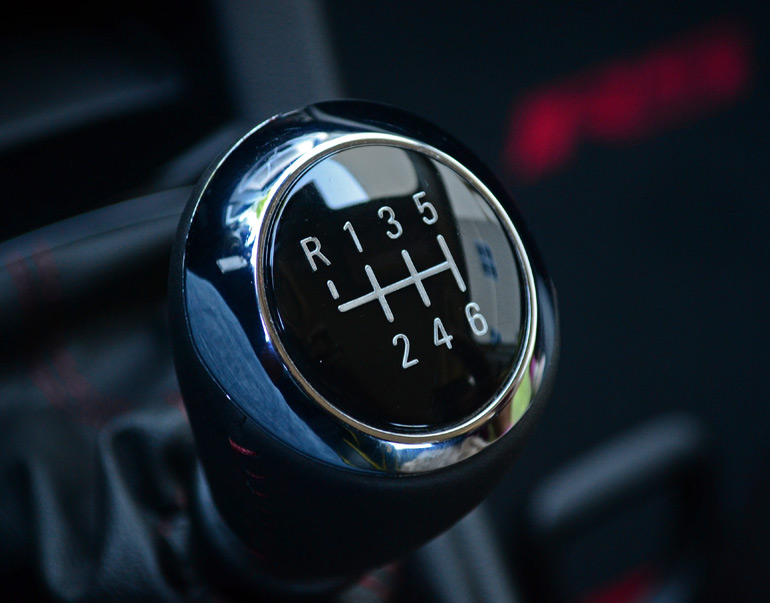 The new 2014 Chevrolet Sonic RS in sedan form and equipped with a 6-speed manual transmission, seems to be the desirable subcompact for enthusiasts from Chevrolet. In my time with the Sonic RS Sedan 6-speed manual, it was a fun adventure rather than a thrilling ride, which you can tell by the numbers on paper. In that, it would be poignant to not mention the fact that the new Sonic RS’s engine outputs 138 horsepower and 148 lb-ft of torque, the same as the any other Sonic LT or LTZ trim equipped with the turbo engine. This amount of power is just right for the smallish chassis of the Sonic and proves to be something that challenges the driver to extract every little bit you can by rowing through gears shifting around 6,000, well before redline to keep the engine breathing properly without hitting that top-end dead spot before fuel cut. 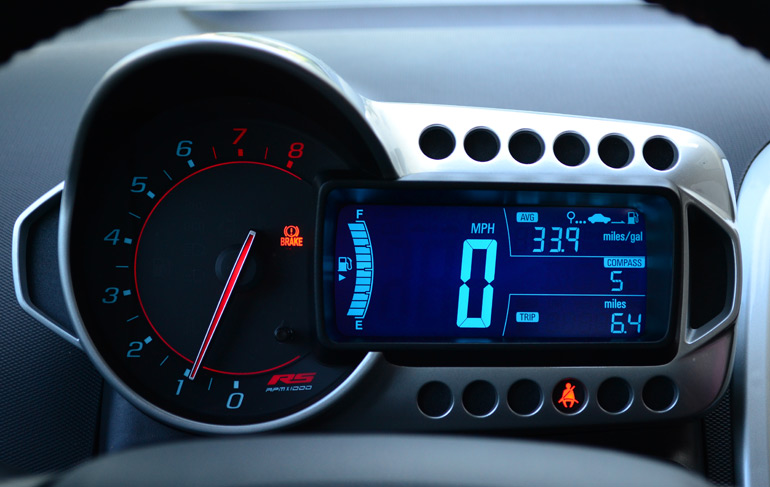 The 1.4-liter turbo engine is eager to muddle its way through the band providing a decent amount of torque down low. Undeniably, the power from the Sonic RS Sedan’s engine isn’t going to surprise you much, you can expect to run to 60 mph in just over 8 seconds. Essentially, the Sonic RS Sedan gets out of the way of itself in just enough time and can assure confidence in its performance on the highway. Toting around just over 2,800 pounds you can find the Sonic RS Sedan to have just the right amount of power for having fun in controlled doses, more so with the 6-speed manual transmission for obvious reasons. 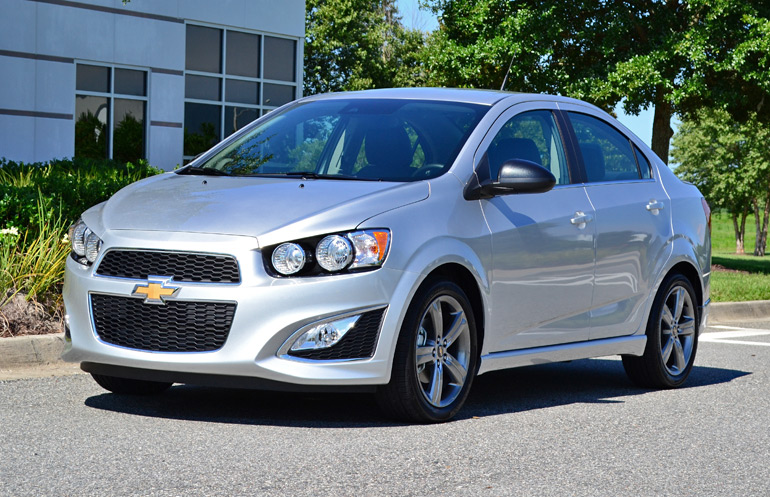 The drivability of the new 2014 Sonic RS Sedan with the 6-speed manual transmission is easy to say the least. Moreover, the soft clutch pedal doesn’t bring about many surprises as does the gearbox’s simplistic easy-throw gear changes. Having driven several other Chevrolet Sonics in past years, it is refreshing to get behind the wheel of the new Sonic RS Sedan and recognize Chevy’s recognition for extracting more of the sporty characteristics out of the capable Sonic platform. With that said, the new Sonic RS Sedan proves to have a better footing on the road over other trims. Still, the Sonic RS has a soft edge when it comes to really pushing it like you would during a casual autocross event. In other words, the suspension, even with the higher rates in the RS trim, has an easy-to-find breaking point where body roll and lean takes a front seat. At times the suspension rests on the mercy of the Sonic RS’s larger 17-inch 205/50 tires wrapping midnight silver aluminum wheels. 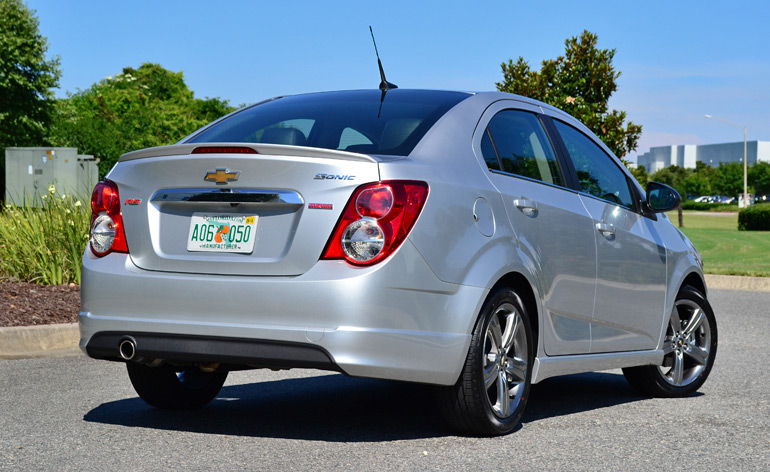 With gas prices continually hovering at record levels, it begs many of us to seek what the automotive market has to offer in terms of hybrid vehicles to consciously avoid depleting our wallets. For those who don’t see any justification in spending the premium that comes with hybrid vehicles, the Chevrolet Sonic RS proves to be an ideal balancing act for something more exciting yet still getting 27 mpg in the city and 34 mpg highway with my 6-speed manual-equipped Sonic RS Sedan. Opting for other Sonic trims will only improve the mpg figures but with the loss of the RS’ sporty character. On my adventures in the fun-to-drive-around-town Sonic RS Sedan 6-sp manual, I saw a nice 35.4 mpg on the local highway and 29.2 mpg around in the city, all beating out the EPA estimates. 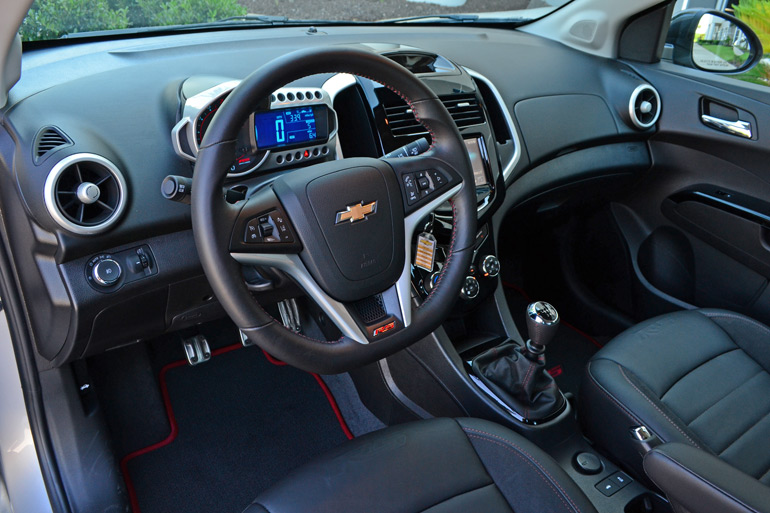 Inside of the new 2014 Chevy Sonic RS Sedan you will find several “RS” badges throughout, including twice in the two front sporty and well-bolstered leatherette seats, once in the flat-bottom steering wheel, another in the unique small-but-easy-to-read half-digital gauge pod, and on the two front floor mats. Accented red stitching can be found throughout the seats, steering wheel and floor mats all nicely bringing a unique sporty character to the visual appeal of the Sonic RS Sedan. 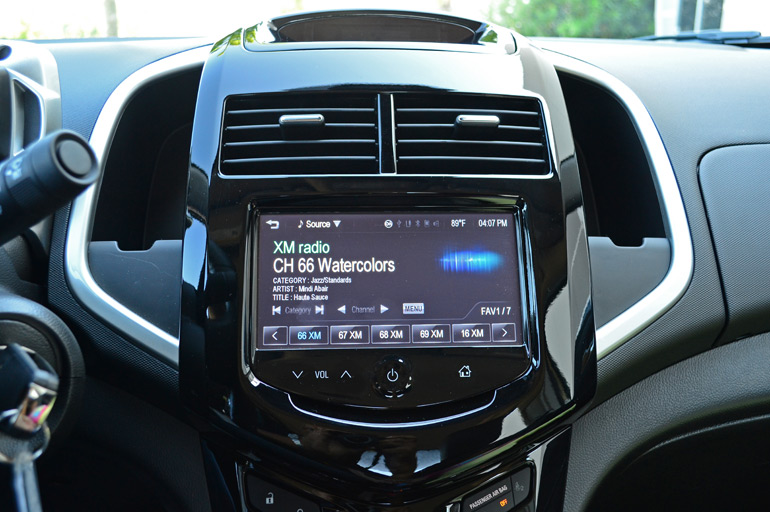 Many of the Chevy Sonic RS Sedan’s controls are kept simple whereas the Chevy MyLink system adding a 7-inch color LCD touch screen to integrate the audio system, Bluetooth connectivity with streaming audio, voice recognition, customization functions and a display for the rear-view backup camera, all come together to upscale the overall perception. The system is easy to use but the use of its touch-capacitive volume adjustment buttons makes you miss the expected physical knob for a subcompact vehicle. Additionally, the optional Advanced Safety Package found on my Sonic RS Sedan test vehicle, incorporated the adjustable forward collision alert and lane departure system. Both of the systems are a nice addition to the subcompact formula, but they are rather annoying at times, especially considering the smallish size of the Sonic and the manual gear gates keeping you attentive at all times due to it requiring several shifts for things to stay entertaining. 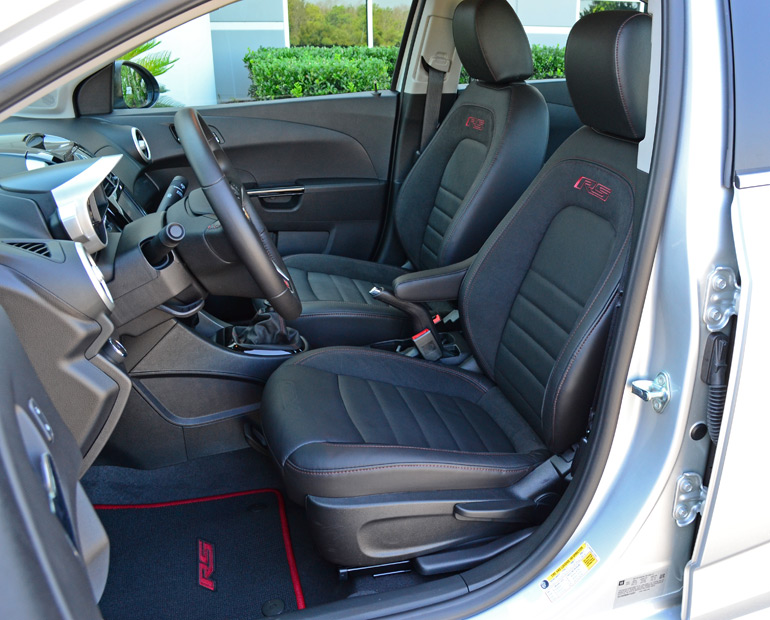 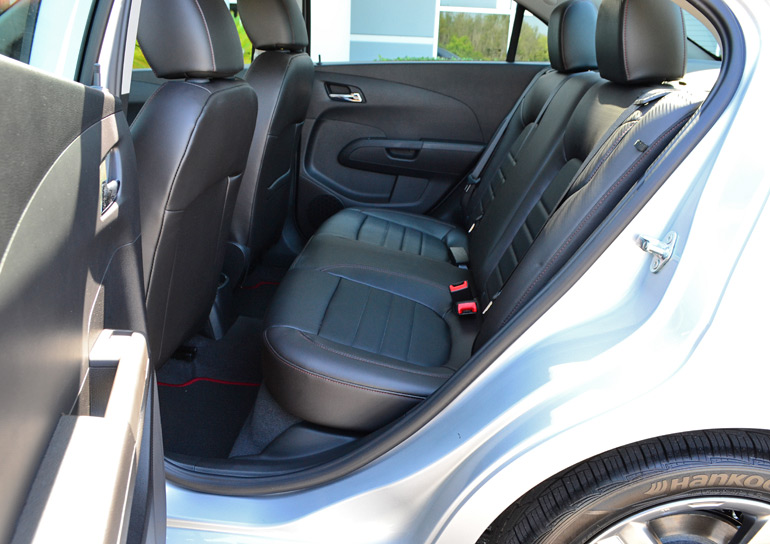 In a nutshell, perceptions from an enthusiast, the 2014 Chevrolet Sonic RS Sedan is probably where the Sonic line should start for its trim levels. Placing it up against performance variations from other auto makers within their line of subcompacts, leaves a little extra power to be desired from the Sonic RS. On the other hand, the Sonic RS in the 4-door sedan form and having its 1.4-liter 4-cylind turbo engine mated to a 6-speed manual transmission, is the ideal combination for Chevrolet’s newest subcompact combining sporty fun, practicality, unique looks that aren’t polarizing. Not to mention, the Sonic RS has an elusive economical side in terms of fuel efficiency. To support the economic value notion, the Chevrolet Sonic starts at about $15,000, while my top-end Sonic RS Sedan trim with the 6-speed manual transmission test vehicle brings the price to an as-tested $20,925 including a $825 destination charge.