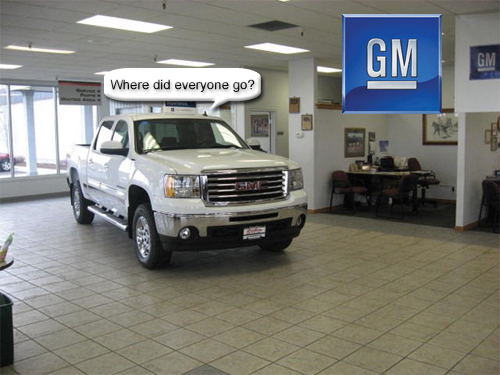 General Motors has recently told about 1,124 dealerships, which are mostly poor performers, that their GM franchise agreements won’t likely be extended past October 2010.

Some dealerships that received this notification may appeal the decision.

The notifications are part of GM’s plan to cut the dealership count from 5969 down to 3600 dealerships. This is done in part of the government-backed reorganization efforts. So much for getting back on their feet and helping this economy get back on track.

This type of news will do nothing but get us all down. Just the other day Chrysler announced the closing of 786 dealerships and as we expected, GM will basically be doing the same thing. GM’s count is a bit larger than Chryslers. If GM dealership franchise agreements drop happens as planned, we are looking at more of an economical slump. Hopefully, after a year or so, we can start looking back at these “closings” and say it worked out for the better. That’s just wishful thinking right now.

Combined, the Chrysler and GM dealership closures could affect more than 140,000 jobs.

“We don’t anticipate that there’ll be much reversing of these decisions,” LaNeve said. “If they have issues that should be brought to our attention, there is a Web site that they can submit that to. We may have made a mistake, and we may have had bad data.”

LaNeve said GM wants the dealers to wind down their operations, and “we will provide some support to do that,” he said.

“It would be inventory-based support,” he said. “We want them to sell down their inventory.”