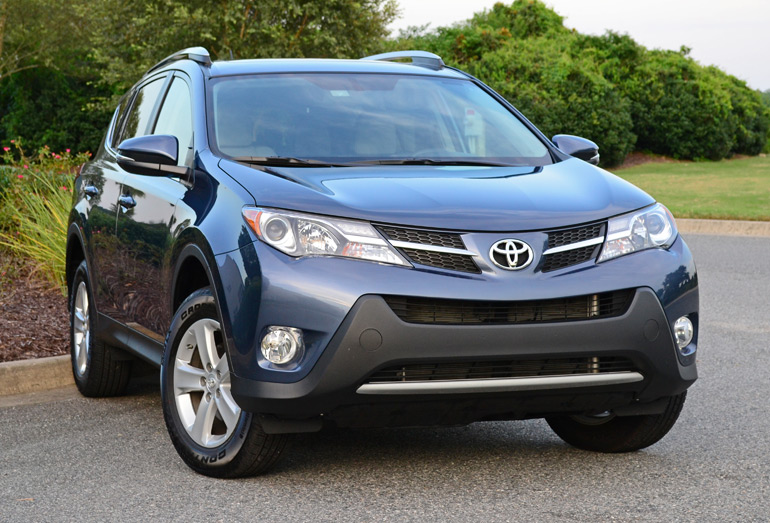 Have you ever sat at the back of the class attempting to be the unassuming person who doesn’t like to draw too much attention to yourself, yet you gave the teacher your undivided attention as you sought to pass the course with a solid grade? Admittedly, I have done this several times through grade school and in college. Though, sitting in the back of the class only drew others’ attention when I would answer a difficult question that only I had the answer for, basically catching my classmates off guard due to my astute verbal answer.

I think of the 2014 Toyota RAV4 as being a vehicle that sits in the back of the class, not goofing off, but quietly paying attention and ready to decisively answer any question thrown at it. After spending a week with the 2014 Toyota RAV4, I think it proves to be the unassuming one; where it can easily be lost in translation with many of its close CUV (crossover utility vehicle) counterparts. Unequivocally, the RAV4 is a go-to for solving the need for an economical and versatile CUV adding in its long-touted reliability and proven track record of giving consumers exactly what they signed up for. 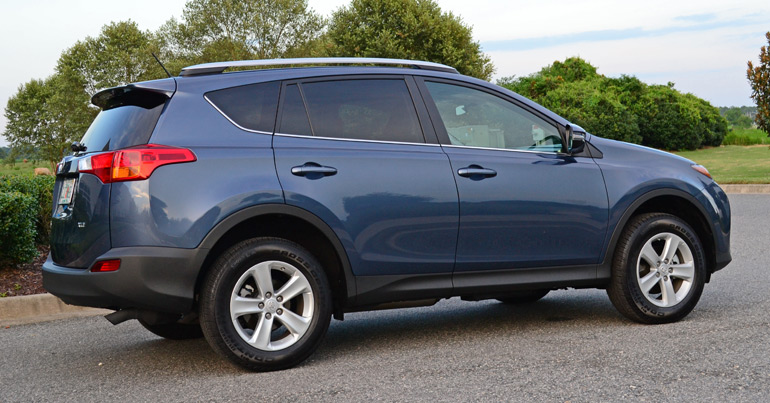 The 2014 Toyota RAV4, remaining unchanged this year from its complete redesign in 2013, meets the expectations of a CUV, never disappointing or exceeding the prospects of others. Basically, you can say the Toyota RAV4 is a choice vehicle for those on the go who don’t need all of the hype and shinny apparel to do its duty.

Powered by a 2.5-liter 4-cylinder engine producing 176 horsepower and 172 lb-ft of torque mated to a 6-speed automatic transmission, the 2014 Toyota RAV4 plays on a level field with its competition. The power from the 2.5-liter 4-cylinder is good for its relatively lightweight body for a crossover, tipping the scale at 3,465 pounds. On the flip side, the engine begs for a bit more when packing in several occupants and/or supplies weighing down the RAV4. The RAV4 scoots along well for most, but enthusiasts may miss the outgoing model’s optional V6 engine’s ample power, which is no longer available – the 2.5-liter 4-cylinder is the only engine choice. Considering the fuel economy, getting you 24 mpg in the city, 31 mpg highway and 26 mpg combined, the 4-cylinder engine in the 2014 RAV4 is an attractive choice for the economical minded. If you are tuned into to the competition, those figures may not immediately impress you. Still, power output is predictable at best. In the full spectrum of sports utility vehicles and smaller crossover variations, the RAV4 isn’t alone in its meager power output proportions. 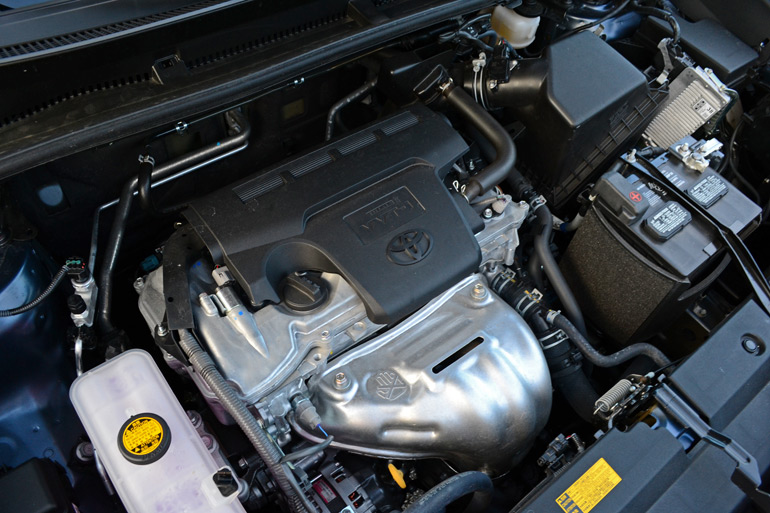 The ride quality and handling aspects of the 2014 Toyota RAV4 have a lively presence about them while not proving to be overly sporty or nearly on the level of some of its sportier competition, such as the Mazda CX-5. The sportiness of the ride and handling attributes to its limitations, which can be found without too much lateral effort at a sharp turn of the relatively lifeless steering wheel, mostly due to its electric assist. The steering feel is not completely numb to the road. However, you may not get as much feedback as you would like through the wheel. Ride quality remains to be good, never really upsetting body movement on bumps and uneven surfaces. 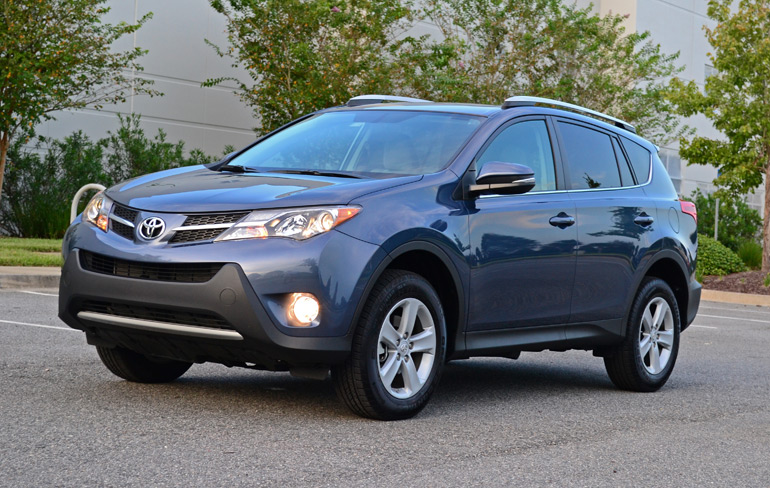 Acceleration comes on as a mostly expected trait remaining responsive enough to ensure confidence. 0-60 mph time isn’t that impressive at just over 8 seconds. That yields you just enough power to not feel threatened by jumping into highway traffic from a short exit ramp. 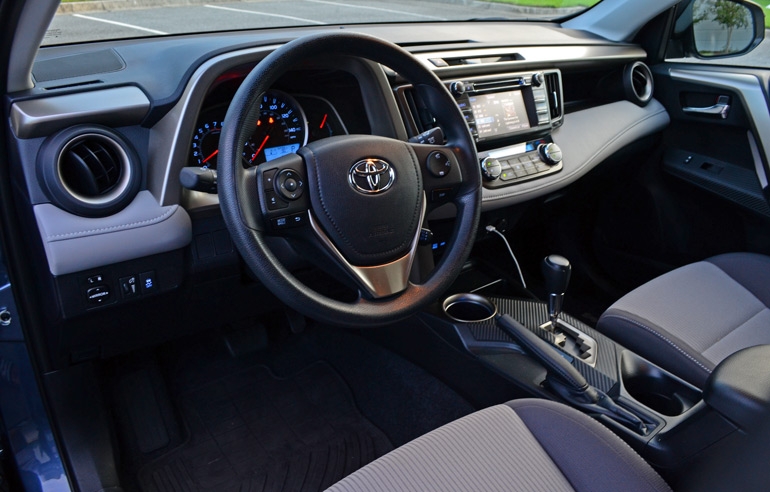 The interior of the 2014 Toyota RAV4 is practical, consisting mostly of hard plastics. Though through some trim pieces you will find faux carbon-fiber accents along with a limited amount of soft touch areas. Some of the traits that liven up the interior are limited to the dashboards belt-lined stitched padded trim, dual-zone climate controls and the standard center color LCD touch screen. Adding to the touch screen is the gps navigation system made possible from the optional Entune Premium Audio with Navigation package. Being that my 2014 RAV4 test vehicle was in its XLE trim, a middle of the row trim slotted between the base LE and top-level Limited trim, many coveted features were included in the overall package. By having the use many standard highlighted features, such as streaming Bluetooth audio, Bluetooth phone connectivity, dual-zone auto climate controls, heated outside power rearview mirrors, power moonroof, backup camera, fog lights, and the Entune suite of apps, the RAV4 will appeal to the value seekers. Adding in the optional premium audio with navigation system, at an additional $585, keeps the RAV4 from being out of the races with counterparts that offer the same feature sets in option packages costing twice as much. 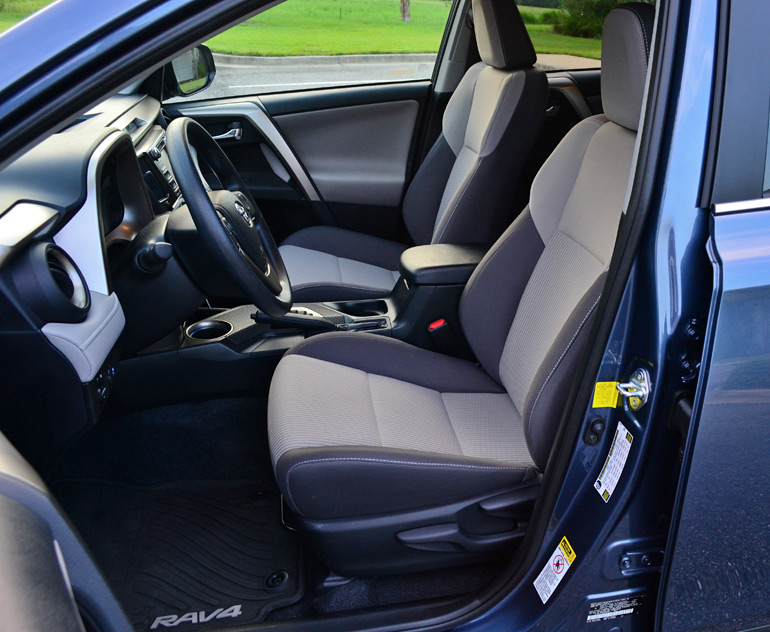 Interior room is respectable, the front seating is comfy and supportive from the surprising bolstering, making full-tank trips worthwhile. The back seating area is good for 3 normal-sized adults with a good amount of leg room, but can quickly become not so welcoming after a couple hours of shoulder-to-shoulder compactness. The rear folding 60/40 split seat backs opens up the 38.4 cubic feet of storage space to a nice 73.4 cubic feet. Access through the rear manual hatch proves to be easy by the way of a low deck. A power height-adjustable rear tailgate is standard on the Limited trim. 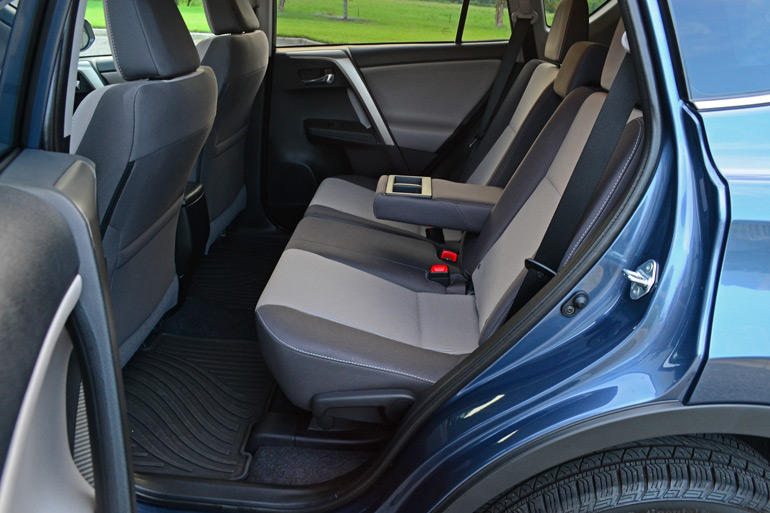 In the 2014 Toyota RAV4’s short list of limitations, the expected quality, durability, versatility and optional equipment list all attribute to the RAV4 being an exceptional seller. No doubt that this tradition will stay strong and steady starting with the RAV4’s basic foundation and building off of that into a vehicle with the features that many desire in a compact crossover. The availability of all-wheel-drive adds to its appeal as a crossover to perform light off-roading duties and provide decent traction on slippery surfaces. 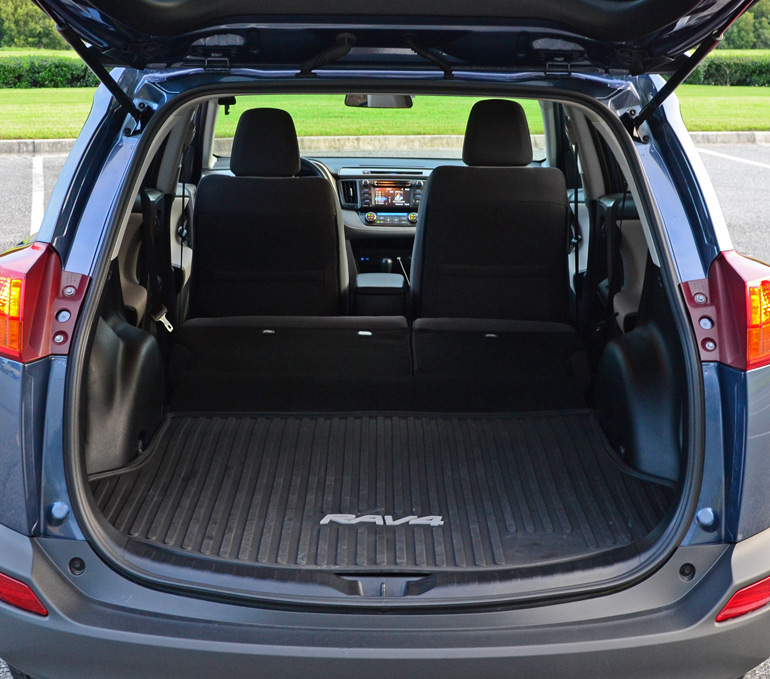 The final word on the 2014 Toyota RAV4 XLE is that it remains to keep itself positioned on a steady course in its recognition as a compact crossover, not really a bad thing for some people. The 2014 Toyota RAV4 retains its long-touted standing as a respectable go-to for practicality for those who enjoy the simple things in life, divulge of drawing too much attention. Starting at a price of just $23,550 puts the RAV4 within reach of many looking to a versatile and economical package without sacrificing quality. The as-tested price of my 2014 Toyota RAV4 XLE FWD came to $27,008 with the notable Entune premium audio and navigation package, V.I.P. security system, all-weather floor mats, cargo net and an $815 delivery, processing and handling fee.