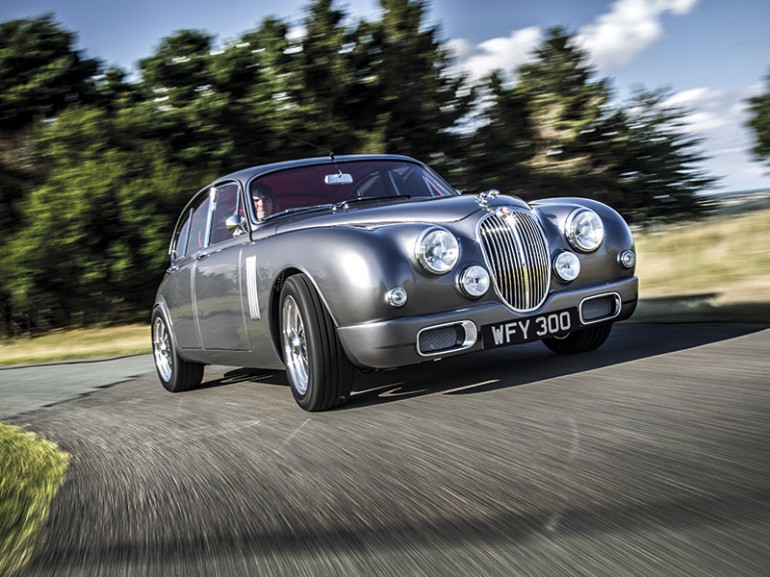 If you were to ask me what my favorite Jaguar was, I might blurt out the E-Type. Then, the person asking me the question would probably restate the question uttering “what is your favorite modern-day Jaguar?” At that time, I could mumble out “the new F-Type Coupe.” I am sure my answers wouldn’t start any fights, but one could throw a wrench in our one-on-one conversation by interrupting us with the words “Mark 2.” That would be an interesting conversation because the look on my face would be rather priceless as I looked dumbfounded and plainly confused thinking to myself what in the world a Mark 2 was. After a couple minutes I would have realized I know this car from past automotive history lessons from one of my ‘automotive’ friends who happened to live in England for several years. 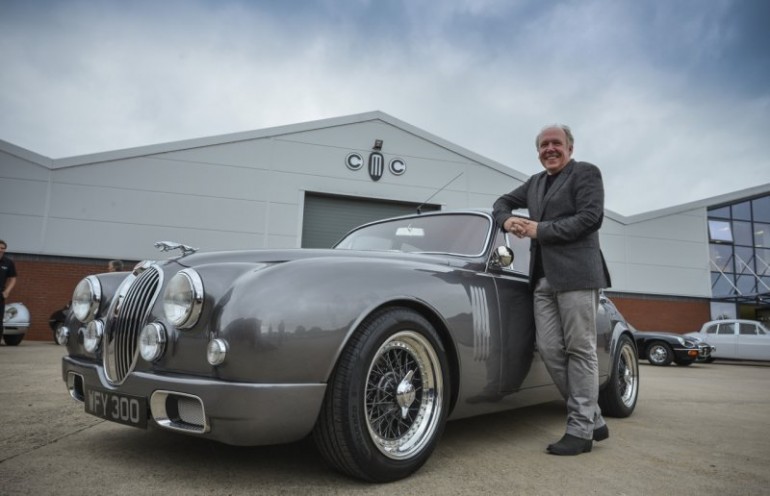 The Jaguar Mark 2 was a sedan that birthed in the countrysides of England in 1959 and saw production last until 1967. 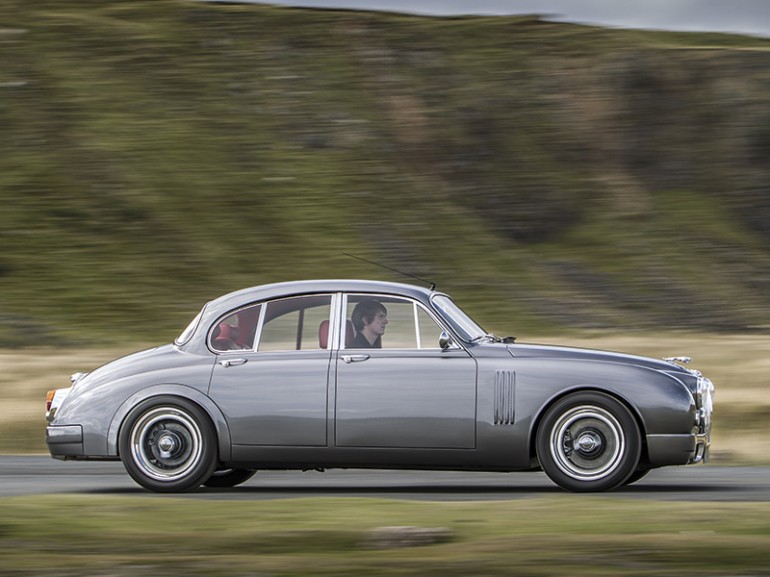 Paying homage to the Jaguar Mark 2, Director of Design at Jaguar Cars, Ian Callum, took on a reengineering project by Classic Motor Cars Limited (CMC) restorers. Taking a Jaguar Mark 2 and modifying it with modern-day twists is somewhat of an understatement considering this re-engineered Mark 2 took on a full array of parts and design elements you would expect for the latest Jaguar supercar to have rolling off of the assembly line today. 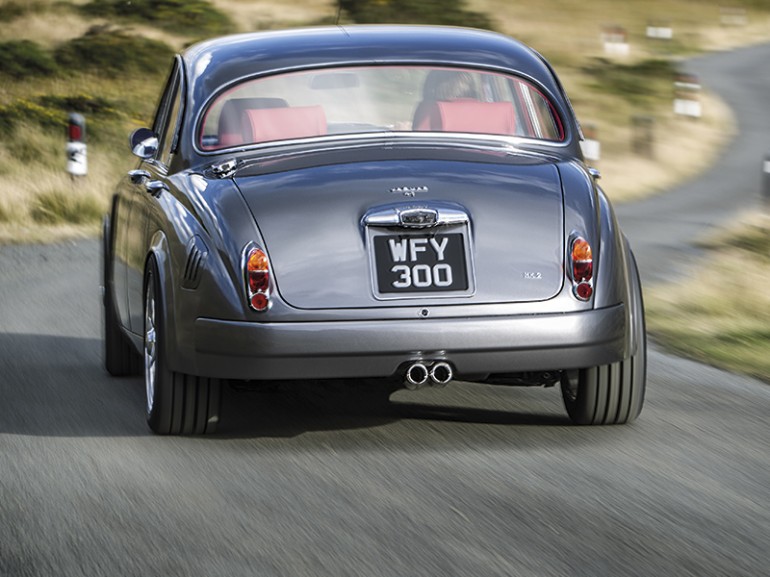 The car was redesigned by Ian for his personal use, featuring a modified 4.3-liter XK engine, 5-speed manual transmission, a unique independent rear suspension, modernized brakes and many other intricate parts making it drive like a dream, literally. You can call this unadulterated Bespoke, if that can be mouthed as a term – it fits.

The complete story and build dynamics has been posted below for your enjoyment. Taking a glance at this engineering marvel has us salivating. I wonder if Ian will build one for someone else at the right price?

Ian Callum puts his personal twist on the famous Mark 2

Thursday 28th August 2014 – A unique Jaguar Mark 2 redesigned by Ian Callum, Director of Design at Jaguar Cars, and reengineered by leading restorers Classic Motor Cars Limited (CMC) has been unveiled at the opening of the company’s new headquarters in Bridgnorth, Shropshire.

The building was officially opened by motorcycle and Formula One Grand Prix world champion John Surtees OBE and the car was unveiled by Jaguar’s legendary test driver Norman Dewis.

CMC’s new building complex is one of the biggest of its kind in the UK. Fitted out to the highest standards and with new paint and trim shops, it provides some 40,000 square feet of production space, allowing CMC to cover every aspect of a car’s restoration in-house, except for chrome plating. Another 24,000 square feet is provided for bespoke classic car storage.

This exciting 18 month joint project between Ian Callum and CMC has endeavoured to retain the integrity of the original Mark 2, whilst making it even more exciting in shape and performance.

Ian Callum said: “This is a very personal statement. A long held notion that, although the Mark 2 has always been a beautiful car, it could be even more exciting in shape and performance. Whilst maintaining the purity of the car’s form, I wanted to add a number of modern twists to the design. Simplification and clarity was my objective.”

The car has been redesigned by Ian for his own personal use and, working with CMC’s engineers, it now boasts a huge number of aesthetic and technical modifications that make this a practical, reliable, enjoyable and exciting everyday vehicle.

Commenting on the specifications, Ian said: “The stance of the Mark 2 is already excellent, but I wished to make it even better. The car’s form is now 30mm lower and sits on 17” split rim spoke wheels. The bumpers are now part of the overall form. It is a fine balance of extracting and adding.

“I have always loved traditional louvres as seen on many older race cars. Four louvres appear on the side of the car to add to that sense of power and ‘something different’. Of course they had to work, so they have been designed in a low-pressure area for a better internal airflow from the modified engine.”

The car has been fitted with Clarion’s NZ502E single DIN multimedia station, a high technology in car entertainment system with a 16cm flip-out touch screen, amongst other features, and component loudspeakers in specially-designed housings. The cabling has been provided by VDC Trading, as used in the world’s top recording and mastering studios, such as Abbey Road.

Peter Neumark, Chairman of CMC, said: “The wide-ranging list of modifications in the Mark 2 shows just how much design and engineering development has gone into this venture from the original car. To be chosen by Ian Callum to work with him on his project is a testament to the skills and passion that exist within our business, and is something that CMC are immensely proud of.”

Ian said: “Every time I go to CMC it excites me to see so many wonderful machines being worked on with passion. I always leave feeling a much happier person.”

John Surtees OBE said: “I have long admired the designs of Ian Callum, to be present at the unveiling of Ian’s personally redesigned and updated Jaguar Mark 2 is a privilege, and I am honoured to be officially opening the premises that have made this extraordinary project possible”.

Norman Dewis said: “I have been associated with Jaguar for more than 60 years and was their Chief Development Test Engineer for 33 years. I have always been excited to work with them and over the years I have come to know and respect the work that CMC have carried out restoring Jaguar’s heritage. Mark 2 by Callum is something special and I was delighted when I was asked to unveil the car. It is something that both Ian Callum and CMC should be very proud of”.