Daytona in the middle of August is famously hot, but when you combine near record temperatures, a full racing suit, tight fitting helmet, and a turbocharged 600 horsepower Rallycross Supercar running full out with no windows, it is almost unbearable. 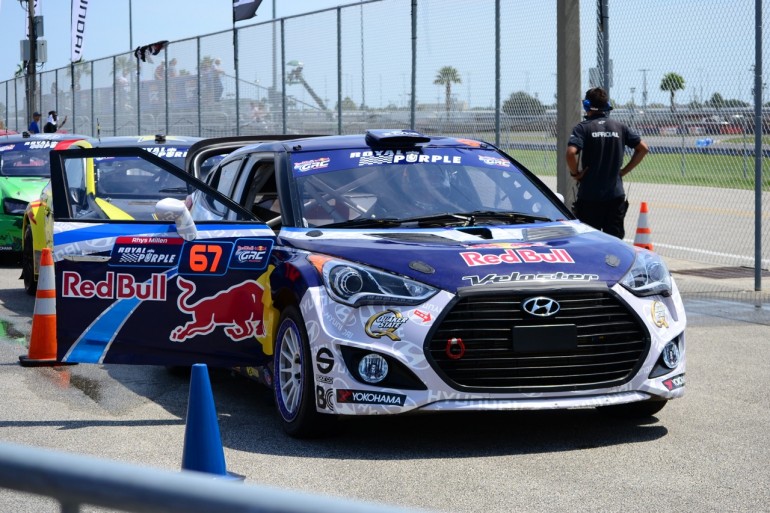 Hyundai had invited the Automotive Addicts team to join Hyundai/Rhys Millen Racing for “hot laps” around the Red Bull Global Rallycross course as they prepared the Hyundai Veloster Turbos for two days of thrilling racing at Daytona International Speedway. We jumped at the opportunity to meet Rhys Millen Racing driver Emma Gilmour and spend some time with the racing/drifting/rally legend “Mad Skills” Rhys Millen; knowing that we would also get to some time in the passenger seat of a race built Hyundai Veloster Turbo only made the trip better. 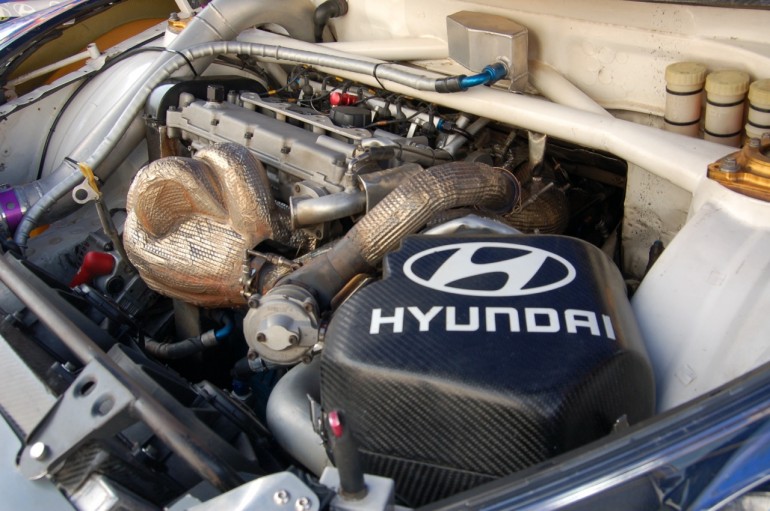 If you haven’t heard of Rallycross, it is probably because the motorsport is less than four years old in the USA. Originally a part of the 2010 X Games, Global Rallycross expanded to include an initial five race championship series won by Top Gear USA star Tanner Foust in 2011. Now in its fourth year, Red Bull Global Rallycross has expanded to include ten races at different locations around the globe; including Barbados, New York, Las Vegas, and now, with last weekend’s inaugural event, just down the road at “The World Center of Racing”, Daytona International Speedway. 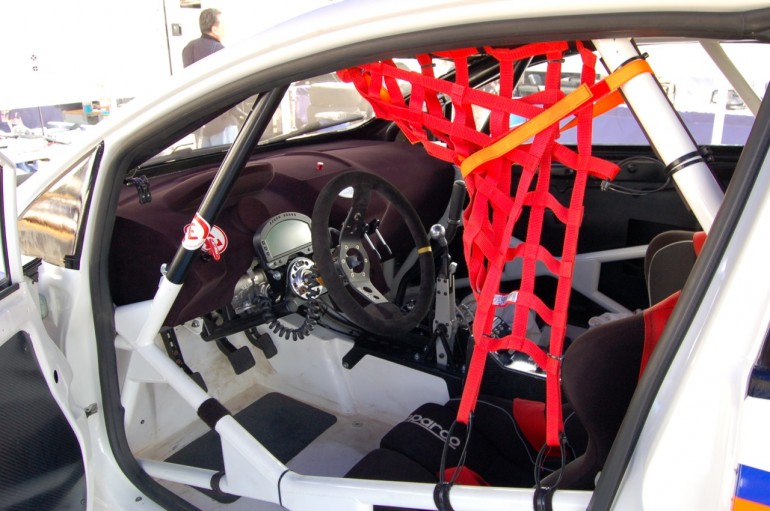 As you would expect from an event originating at the X Games, Rallycross racing is extreme and unique. Consisting of traditional paved track, treacherous 180 degree pinpoint u-turns, deeply rutted mud – I mean dirt – sections leading to a mid course 70-foot long jump, a dangerous slalom, and a 120 mph straight that ends in either a the main route or a “joker lap” which each driver must take once per race. The joker lap throws yet another wrench in the system. Significantly shorter than the main circuit, the joker can be strategically used to aggressively pass fellow racers or, when planned properly, take the race winning lead spot. Watching the cars scream out of the joker lap makes you shield your eyes, knowing that the fearless drivers work to cut off competitors blindly, often causing paint to swap or worse. 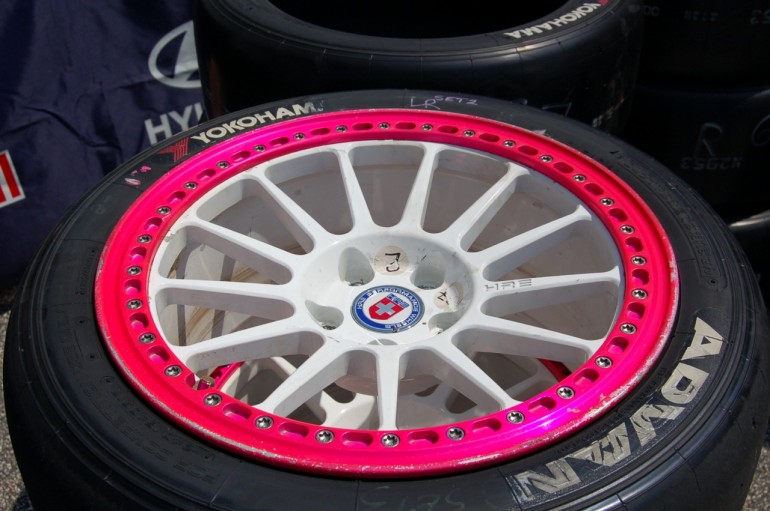 My time strapped into the passenger seat of the #27 Rhys Millen Racing Hyundai Veloster Turbo was something I will never forget. New Zealander Emma Gilmour was behind the wheel, and let me tell you if someone ever hints that you “drive like a girl”, you need to thank them for the compliment. Gilmour dumped the clutch and let the car rocket to 60 mph in the longest 1.9 seconds of my life. I remember seeing a gentlemen fired out of a cannon at a county fair when I was a kid and I’m pretty sure it felt a lot like that launch. 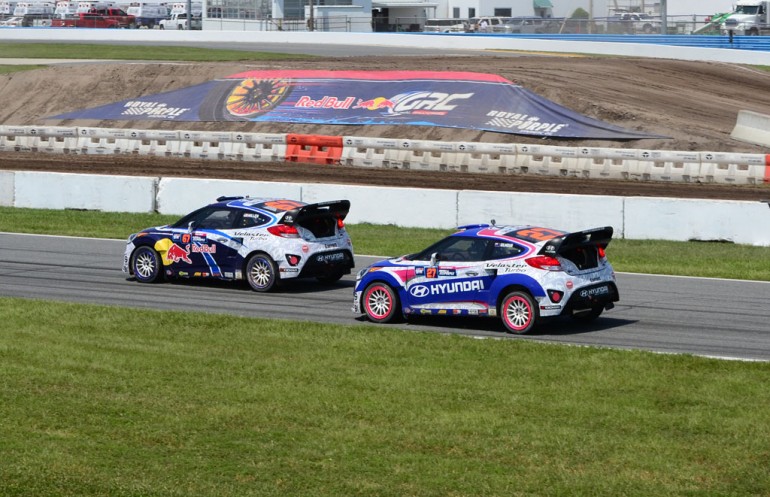 Emma took the Veloster through its paces, subjecting me to tight hairpin turns, which produced G forces that I would champion should be reserved for Navy pilots and space shuttle training missions. The 70-foot jump completely took my breath away and the landing reminded me of a trip to an over enthusiastic chiropractor, I’m pretty sure every joint in my body made that eerie cracking sound at least once. 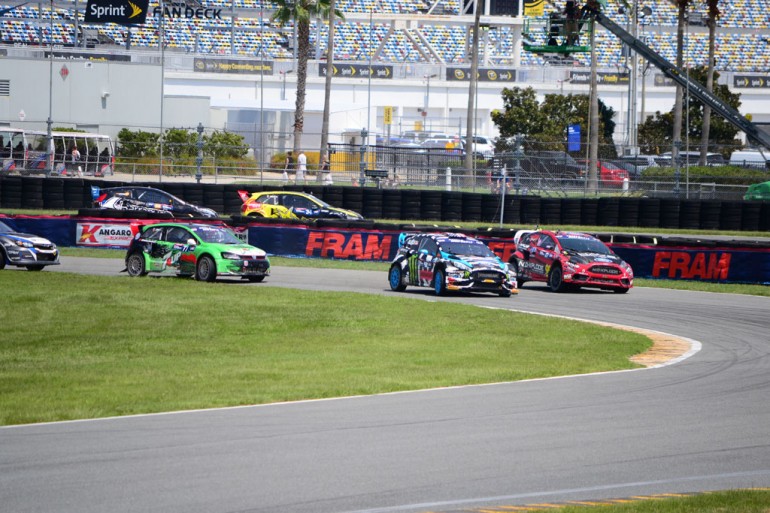 My brother, and Automotive Addicts videographer, Fred was able to take a couple of hot laps with Rhys Millen in the #67 Veloster. Rhys did not hold back anything and according to both the driver and his crew chief, Fred’s run yielded Millen’s fastest top speed of the day on the course. When we spoke with Rhys later in the afternoon he told us that he went out 100% and having Fred passionately cheering from the passenger seat made him push even harder. I don’t want to award any undeserved credit, but two days later Rhys went on to win the Supercar final, his first career Red Bull Global Rallycross victory in 21 series starts.