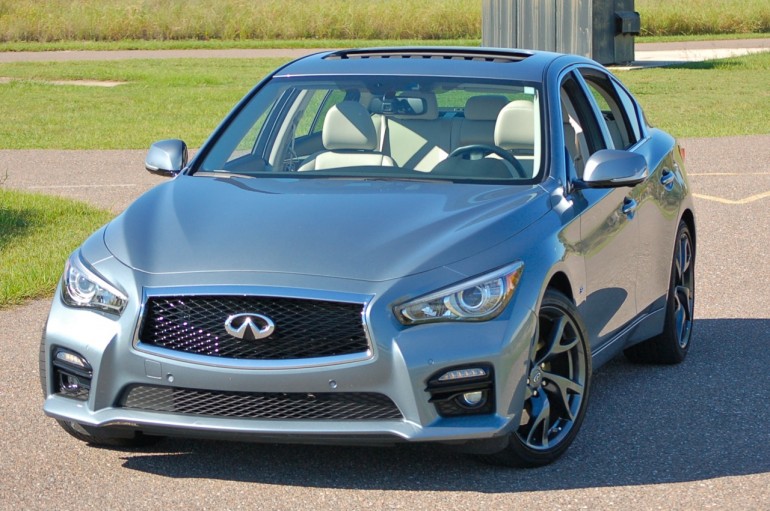 In my short span of life on this green earth thus far, it is apparent, regardless of your beliefs, that technology is a ruler and signifier of how we live and our ultimate quality of life. Technology has taken us all by storm and continues to progress at exponential rates, sometimes rates faster than the fastest road-going cars coming out of the assembly line. Some automotive manufacturers have latched onto the fast-moving technological age that we live in and injected tech that seems far-fetched to many – something directly out of the Star Trek movie series or NASA’s Kennedy Space Center here in Florida.

Infiniti, a company well known for endowing its vehicles with the latest gadgetry, have introduced their all-new Q50 luxury sports sedan to be at the forefront of the technological age, receiving just about every conceivable techie gadget that can be legally equipped on a car today. 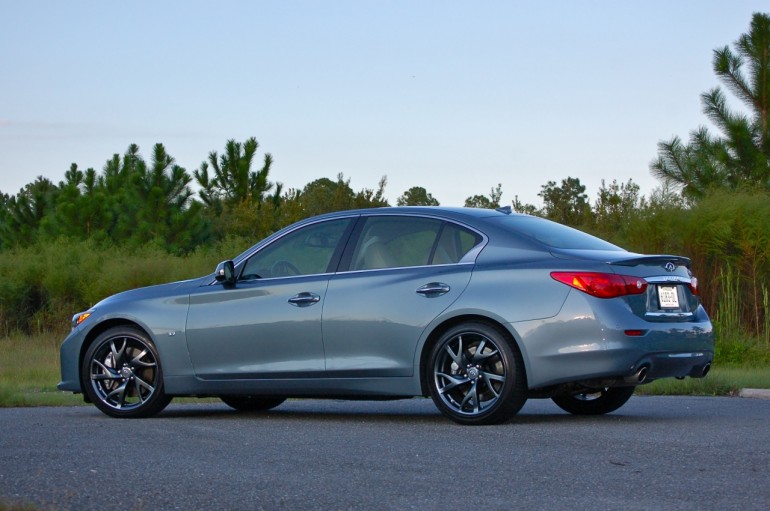 I had the pleasure of experiencing the tech in the new 2014 Infiniti Q50S for a full week and my take away has me all giddy with high-raised eyebrows. The 2014 Infiniti Q50 has ushered in a new appeal for the Infiniti brand, filling the slot for where the current G37 will eventually depart. Performance of the Infiniti Q50 is taken directly from the G37, featuring the company’s highly-praised 3.7-liter V6 engine with 328 horsepower and 269 lb-ft of torque mated to a quick-shifting and adaptive 7-speed automatic transmission with solid magnesium steering column-mounted paddle shifters. As standard, power is directed to the rear wheels in the Q50S while there is the option for an all-wheel-drive system in the new Q50 AWD and Q50 AWD Hybrid. 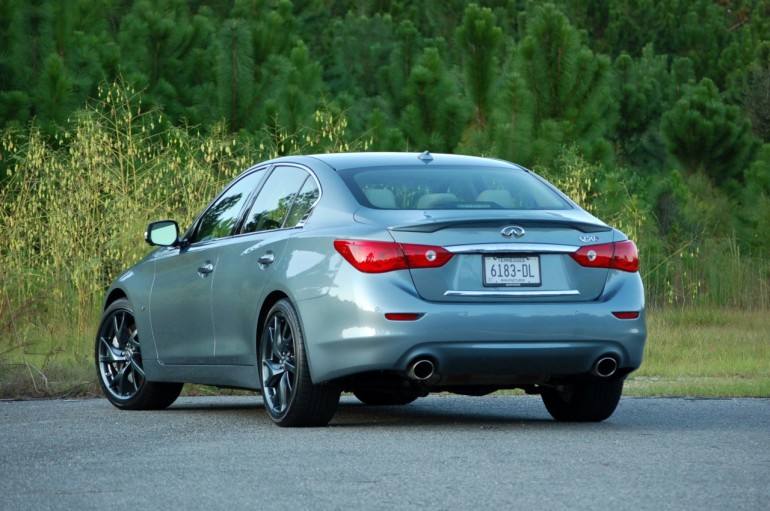 Diving into the new 2014 Q50S loaded up with all available options immerses the driver with many features at their disposal. Most of the feature sets, part of nicely-appointed option packages, are derivatives of safety features first introduced nearly 5 years ago on Infiniti vehicles like my very own FX50S. Many of these safety features, mostly active instead of passive like the Advanced Airbag system, have been taken to a new level introducing many add-ons that make for a safer car allowing a seamless transition into most driving styles and road types.

Getting into the meat of the tech on the new 2014 Infiniti Q50S may not require a doctorates degree, but it may be a bit intimidating for those who aren’t accustomed to understanding the home page of NASA. And yes, the Infiniti Q50S convinces many that it could pilot and launch the next space shuttle all on one tank of gas. Starting with the active feature sets acting as a virtual massively-sized safety blanket of the Q50S, here you have Distance Control Assist (DCA), Blind Spot Warning, Blind Spot Intervention, Intelligent Cruise Control, Forward Collision Warning, Predictive Forward Collision Warning, Forward Emergency Braking, Lane Departure Warning/Prevention, Active Lane Control and Adaptive Front Lighting System. These feature sets, all part of the Technology Package on the new Infiniti Q50S, pay attribute to the avoidance of an unfortunate accident or being the cause of one. 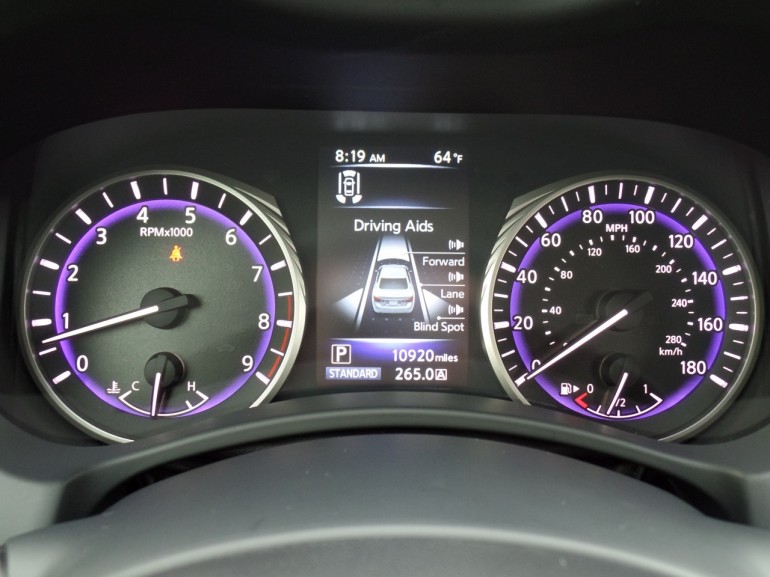 Starting out with the Lane Departure Warning and Prevention system, the Infiniti Q50S creates a virtual soft-barrier when traveling on clearly marked roads. The system basically reads painted road lines through a camera mounted in front of the rearview mirror in the windshield and utilizes the new Direct Adaptive Steering system, a steer-by-wire system, to nudge the vehicle’s steering just enough to retain its proper lane. The system works wonders and almost acts as a self-driving assist where you could let go of the steering wheel at times and let the car do the work of following the lane. Though I don’t recommend doing this, ever. Leave it to the professionals and take my word. 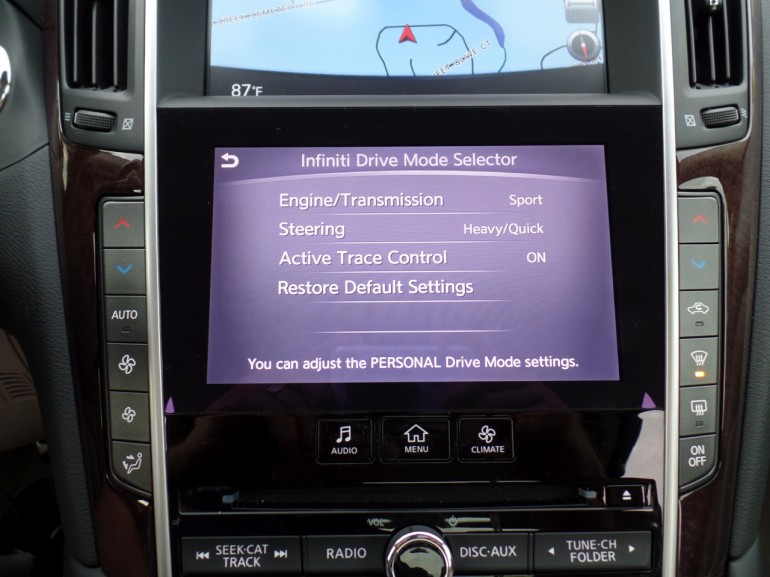 The steer-by-wire system itself is an intricate part of the Q50, allowing for an adaptive steering ratio dependent on speed. The system brings about some dubious thoughts, but in-all, it is a neat little concept. The feedback from the road is somewhat absent while there are servos and motors controlling the steering rack communicating with the wheel position. In case of a system fault or power failure, there is a clutch that will engage to create a physical connection of the steering wheel and the rack. In most cases, while the system is operating as normal, the clutch stays disengaged allowing the servos and computer to their magic with heavy/quick and normal speed and weight settings. 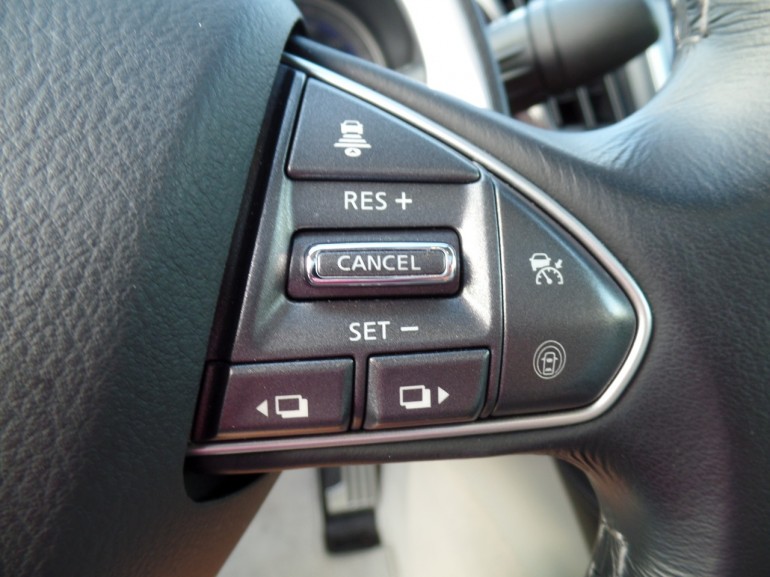 The advanced tech of Distance Control Assist, Intelligent Cruise Control, Forward Collision Warning, Predictive Forward Collision Warning and Forward Emergency Braking systems, the Infiniti Q50 never wants to harm that sharply sculpted front end. These systems, working in synch and fully enabled through a steering wheel button, will automatically apply the brakes in most situations; bringing you to a full stop and acting as a passive braking system in heavy traffic. All you are required to do is press the gas pedal when needed. The system is rather intuitive and combines many stages of warnings when you approaching vehicles too fast or detecting heavy/emergency braking two cars in front of you – just like the commercial demonstrates if you have seen it. 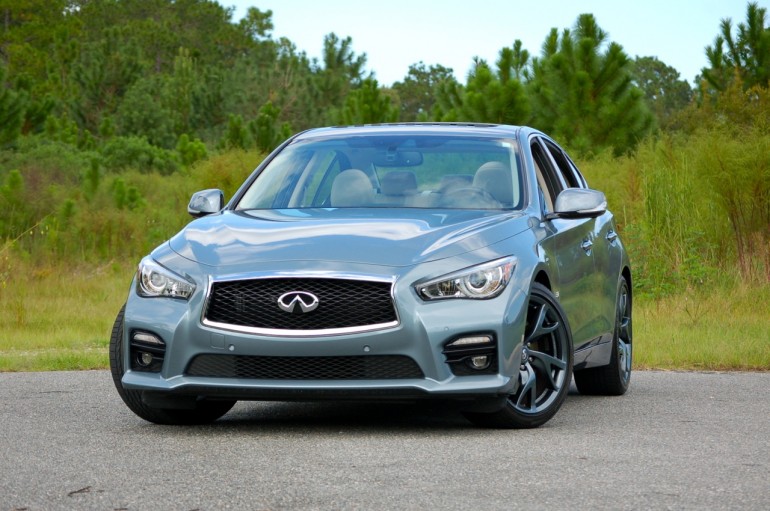 Also, just as found in the Infiniti QX60 commercial, the Backup Collision Intervention system utilizes the rearward sonar sensors and around-view 360-degree camera system to detect objects out back that the Q50 may hit while backing up and will quickly enable the brakes to help prevent collision. I was able to test this system out when I was unknowingly too close to my garage door when backing the Q50 up to drop off some grocery items at home. It pretty much saved me from some potential garage door repair. The Intelligent Cruise Control takes most of the same forward monitoring systems and allows the computer to fully control your gas and brake to retain a preset distance from the vehicle in front. The system will also bring the vehicle to a complete stop if circumstances warrant such an occurrence. All systems utilize a front-mounted radar at the Infiniti emblem combined with the camera and sonar sensors. 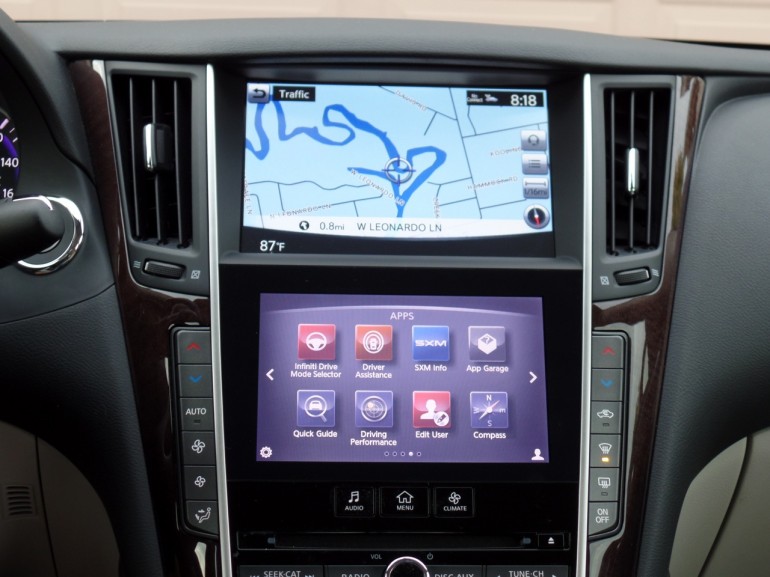 Moving onto the Blind Spot Warning and Blind Spot Intervention systems, they are what they say – the system warns you visually of vehicles in your blind spot through an amber LED light, yet if you venture into the lane while it is detecting a vehicle, you will receive yet another nudge from the Adaptive Steering System as an effort to retain your lane just like the Lane Departure Prevention system does. Again, another amazing feature that may just keep that beautiful finder in its original condition. 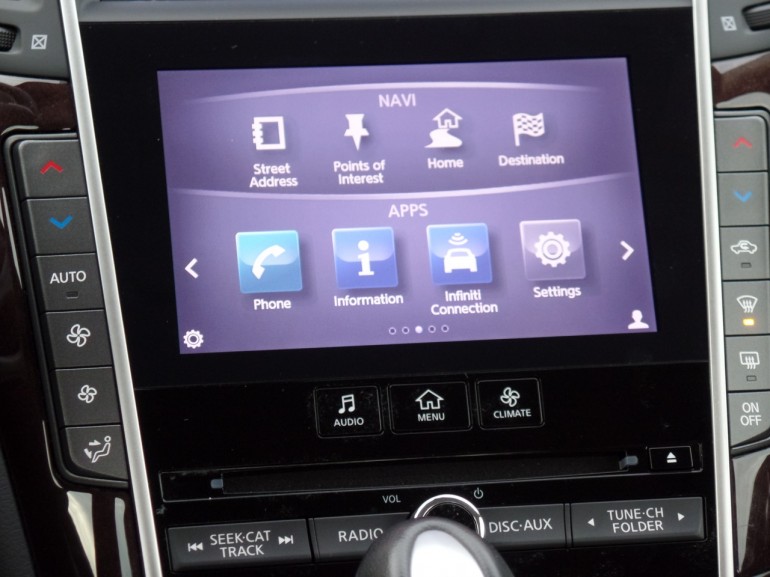 Capping off some of the highlighted technology of the new 2014 Infiniti Q50S that I had a week to play with is the Infiniti InTouch infotainment system combining control and integration of all of the safety features, vehicle settings, climate controls, navigation system interaction and audio system controls. The system is much like a touchscreen for another touchscreen, combining Infiniti’s outgoing touchscreen display and then adding a new interface with a glossy high resolution LCD touch screen for accessing most of the controls and feature sets. The menus, through large app buttons, filter through deep menu sets, all accessing many aspects of the Q50’s tech with some slight redundancy in how you can control certain features. The redundancy, something Infiniti isn’t shy about exploiting in many of their vehicle’s infotainment systems, tends to go over well with consumers, as some may come from other luxury brands making them seek a new way of accessing certain parts of the Q50’s tech features. The only caveat to the system would be the lagging and slow process of loading up upon starting the vehicle.

In all, the all-new 2014 Infiniti Q50 is a technological marvel that many other brands have followed in a pursuit to give consumers the option of having a massive safety blanket utilizing the latest and greatest legal tech you can stuff into a luxury automobile. The cost of all this technology, wrapped in a proper luxury sports sedan, comes to an as-tested price of $53,530 including a $905 destination charge. Sign me up!