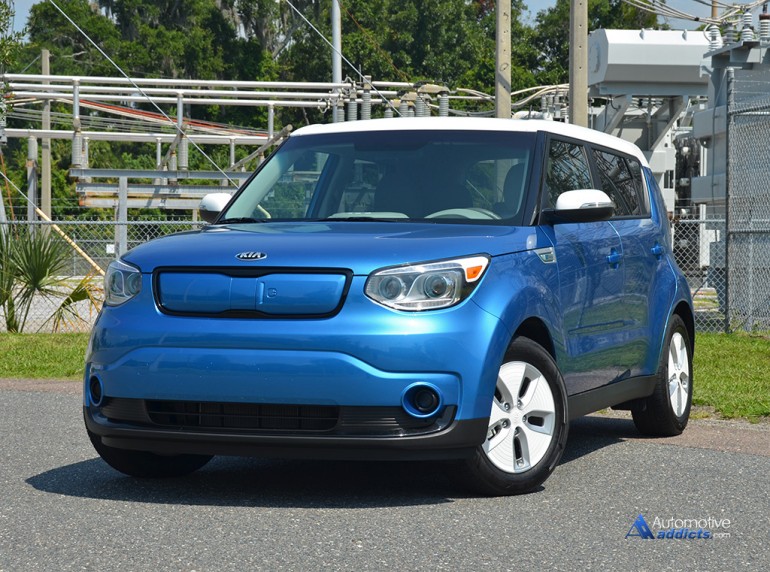 Technology is undoubtedly a pacesetter when it comes to our never-ending quest to find viable alternatives to gas-powered vehicles on the roads of America. At the forefront of technology pushing the envelope further than ever, Kia has introduced a relatively affordable 100% electric vehicle wrapped up in their familiar Soul compact crossover package. Riding on the principles of daily commuter needs in American cities and towns that have the necessary infrastructure to support plug-in charging of EV’s, the Kia Soul EV makes perfect sense but it comes with some caveats. 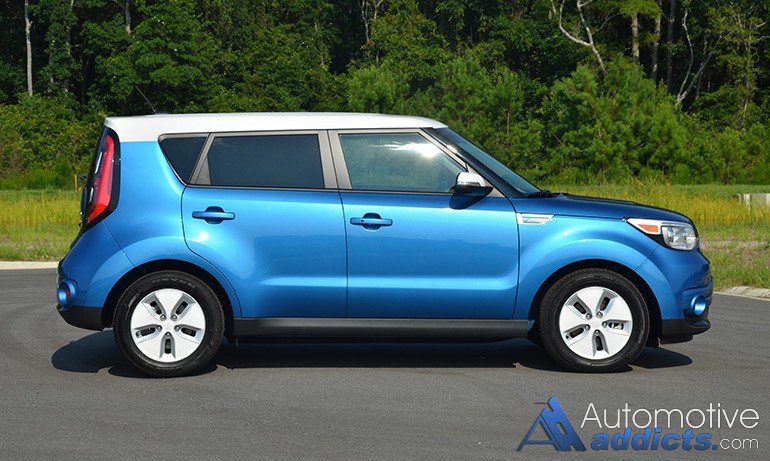 The new 2015 Kia Soul EV has played its cards well and banks on the idea of electric vehicles one day making some headway with the mainstream consumer base. After spending a week with the new Kia Soul EV it was made clear to me that such a vehicle is a marvel and is nearly ready for primetime. However, due to some few factors, the time for the masses adopting such a concept just isn’t here yet.

Kia has done their homework in developing a complete electric vehicle package in their new Soul EV. The Soul EV sports a 109 horsepower and 210 lb-ft of torque 81 Kw electric motor powered by a 27 kWh lithium-ion battery pack. Such a setup makes way for decent power to scoot along in the midst of urban areas and keep pace on the highway and interstates. Getting the Kia Soul EV up to 60 mph requires about 10 seconds but the initial thrust from the instantaneous torque, all 210 lb-ft of it from the start, is a deceptive attainment but proves its point of not being an econo-box pushover. 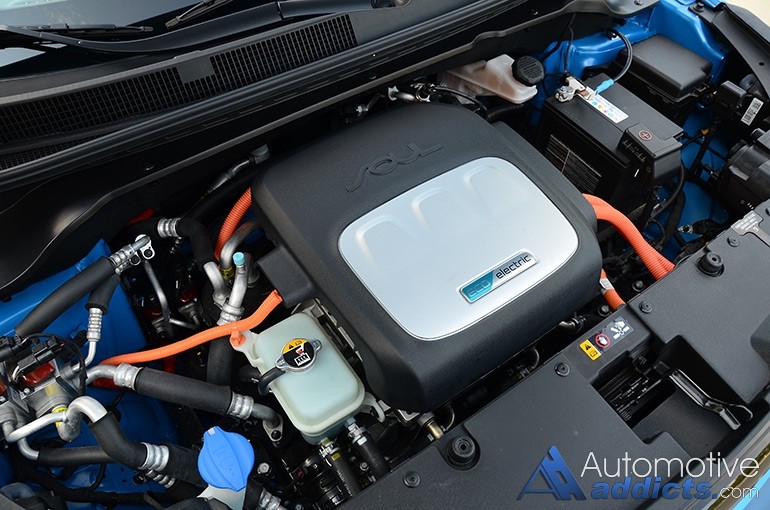 Power from the electric motor is even more deceptive, in a good way, as there is hardly any sound other than a quant whistle followed up by abundant wind noise and slight tire noises when you get up to cruising speeds. Adding insult to injury, the Kia Soul isn’t the most aerodynamic thing considering how the Soul EV captures the same box-framed dimensions as its gas-powered sibling. Departing from the traditional Soul styling attributes is left to a unique fascia housing the charging ports door up front, exclusive electric badges on other panels, painted aluminum wheel inserts, and an ‘electrifying’ color choice. 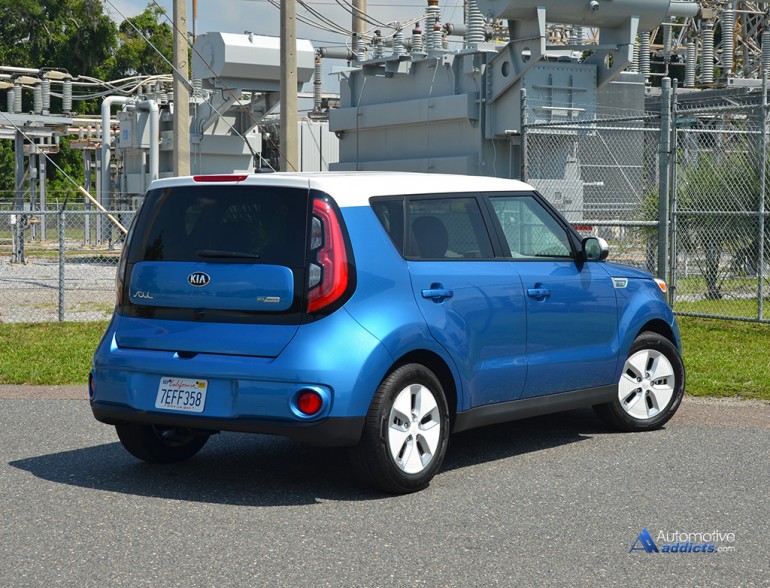 In the full spectrum of the Kia Soul EV’s design language, it carries the formula directly from its gas-powered counterpart stripping the engine for placement of its single-gear electric motor power unit under the hood whilst the battery pack is mounted under the rear passenger seat compartment for weight balance. The interior appointments are almost identical to the gas-powered Soul, minus a few cubic feet for the battery. The EV also has a slight change embedded into the infotainment unit featuring many electric vehicle data menus with a few exclusive settings for charging, power management and vehicle entertainment interaction.

To the credit of Kia, the Soul EV with its estimated 93-mile range produces that exact figure and some if you are in-tuned to driving the vehicle to the benefit of properly managing power usage. In a nutshell, you can “learn” to drive the Kia Soul EV and yield nearly 100 miles to a full charge even when using the air conditioner and a few other accessories. At the same time, you can get just 80 miles or less to a charge if you so choose to inch away from posted speed limits and break the front wheels loose at every fresh green light – and yes, it will break the wheels loose landing them at the mercy of the quick-acting stability and traction control. That’s what 210 lb-ft of instant torque gets you. 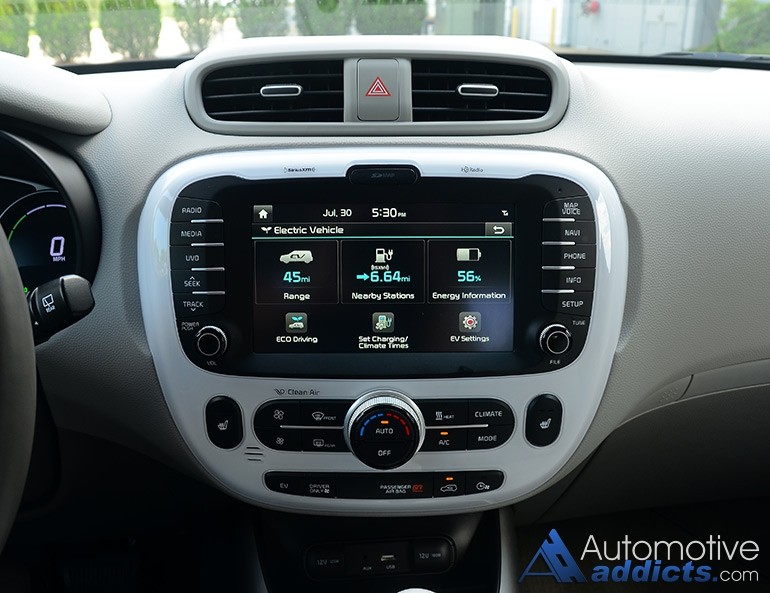 Power management is the key to any electric vehicle’s efficiency and the Kia Soul EV is among the best for regeneration of lost power through its robust deceleration mapping and braking. Use of Active Eco mode is the differentiation of an aggressive or not-so-aggressive deceleration and choosing to quickly charge the battery upon slowing the vehicle. Use of Active Eco mode will decelerate aggressively upon letting your foot off of the gas pedal – or is it called the ‘electric’ pedal? If you tap the brakes and then let off of them, the brake lights remain on, and for good reason considering the high rate of deceleration. Fundamentally, if you have ever driven a Tesla Model S, the driving nature and behavior will seem similar only lacking the robust power of the Tesla in contrast of the smaller Kia Soul EV and it’s comparatively meager power output. 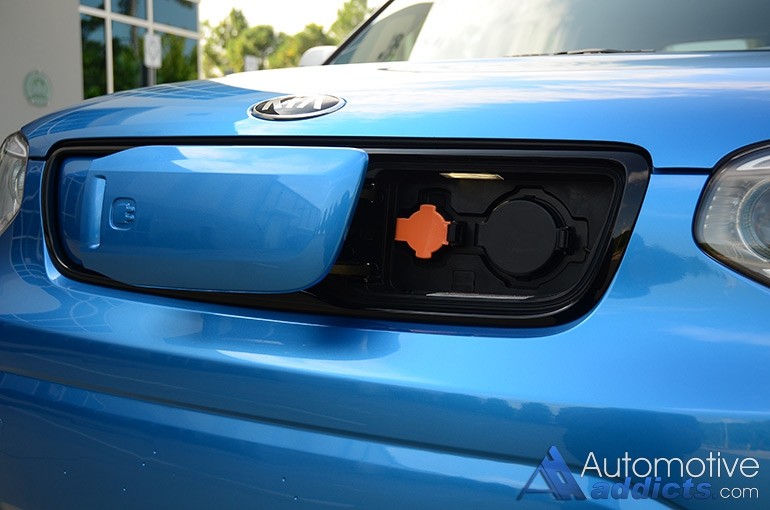 Charging time for the Kia Soul EV is a slight stretch, in a literal sense if you ever elect to do it via your home 120-volt outlet. Performing a charge through such will yield a recharge time of nearly 24 hours for a fully depleted battery. I did a full charge in 22 hours from a mostly depleted battery back, which at the time, it put the vehicle into a reduced power mode just after the display read 5 miles left on its dedicated range indicator inside of the colorful and data-plentiful driver’s gauge cluster. It was assuring that I was able to limp home from being 2 miles away instead of being stranded in the 95-degree heat to await a tow truck. The gauge cluster does its job to repeatedly remind you of the limited range and several alerts of the system going into a reduced power mode as one last gasp for its remaining 5 miles of range. Reiterating this scenario commandeers the infamous range anxiety I could not overcome even when I had a full battery with nearly 90 miles of range indicated with a planned trip to the other side of town. To the benefit of the range indicator, it is more on the conservative side compensating for a potential abuse of power and never deceiving you in such a manor to leave you stranded on the side of the road due to misinformation. At the end of it all, I was able to get a total of 96.8 miles out of a full charge while routinely running the air conditioner. 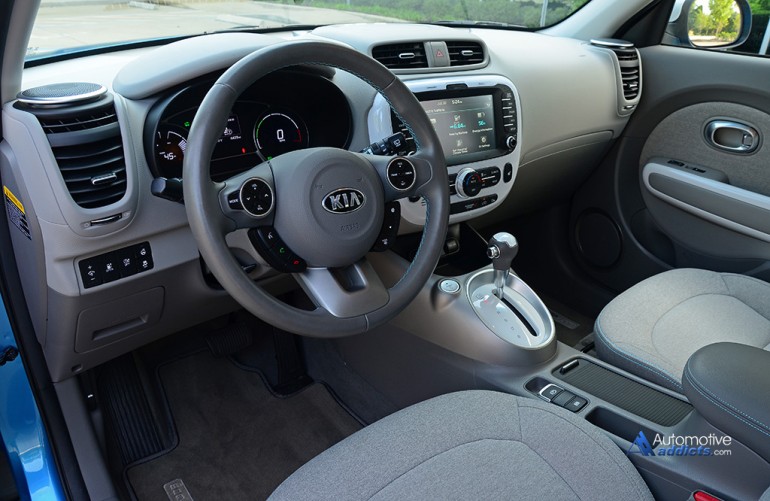 Kia retains much of what the Soul is known for in its colorfully-cheeky design and interior dimensions. The controls, seating area, and over-all interior design doesn’t depart far from its gas-powered counterpart. The abundant use of soft fabric cloth seats is more agreeable to the touch than it is to the eye. With a good amount of soft touch surfaces on the dashboard, the contrast and choice of color palette mixed into the cabin conversely diminish the quality perception. The remarkable performance of the air conditioning and heating system quickly reaching the desired temperature in the cabin slightly make up for the interior’s dullness. For additional energy conservation, there is a “driver only” climate control setting that only powers two vents just for the driver instead of all four in the case of having no other passengers to tote around. 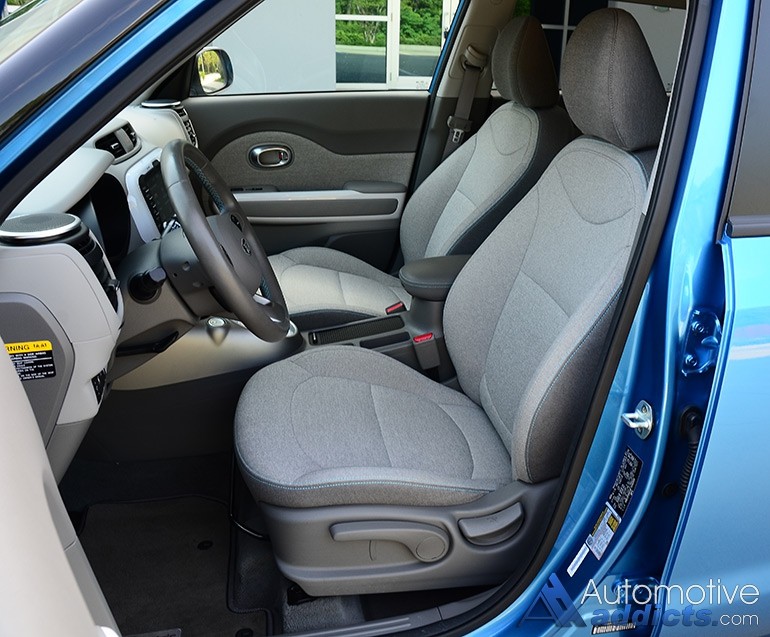 The seamless drive integration of the Kia Soul EV combined with its exclusive 100% electric platform meshed into the trendy Soul body style makes for a desirable EV for those with the conscious to drive such a vehicle. Speaking of conscious, one would need to be prepared to find nearby charging stations that provide the DC fast charging option to reenergize a depleted Soul EV battery pack up to 80% in about 30 minutes. I found the select few stations to be about 7 to 15 miles away from my home and constantly displayed on the dedicated EV-button menu setting on the Soul EV’s infotainment display. Quite the convenient feature to keep that incessant range anxiety in check. Use of a 240-volt charge station will yield a full charge time of 4 to 5 hours. Either way, the Kia Soul EV’s dual ports accept either of the three methods for charging (120-volt, 240-volt and DC Fast Charge) 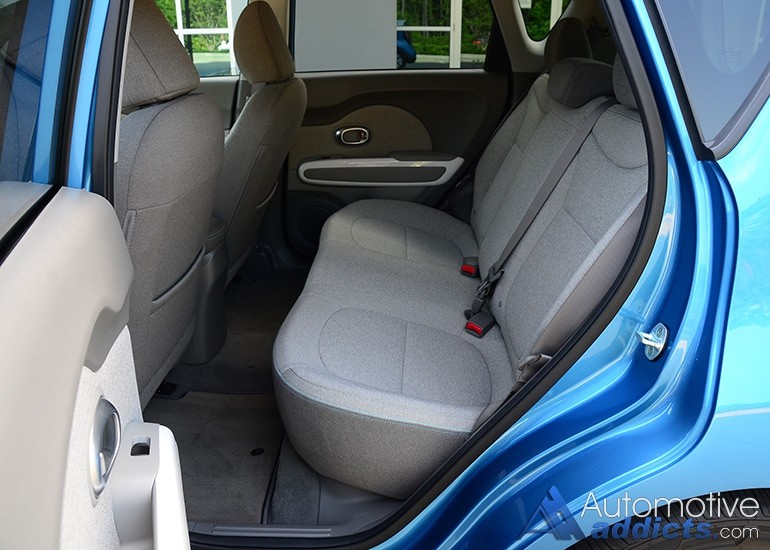 Capturing the many unique traits of the Kia Soul EV make it a viable alternative to an in-town gas-powered vehicle. As far as a replacement for your main mode of transportation when you are required to travel outside of your city limits, the Soul EV won’t suffice even if charging stations are plentiful. The limited 93 mile range, slightly more than some of its EV competition combined with 30 minutes or more that it takes to receive a full charge, are the major caveats in this formula. However, with the as-tested price of just $36,000, the Kia Soul EV finds an attractive characteristic that may win over a few who want to experience something totally different in the confides of a single town. To boot, many states offer considerable tax incentives bringing the price down to nearly $29K for a fully electric vehicle, which may be intriguing to the point that the Soul EV graces your garage equipped with at least a 240-volt charging station.

Currently, the 2015 Kia Soul EV is available in only six states (California, Georgia, Texas, Oregon, Washington and Hawaii) with plans to expand to additional areas soon.