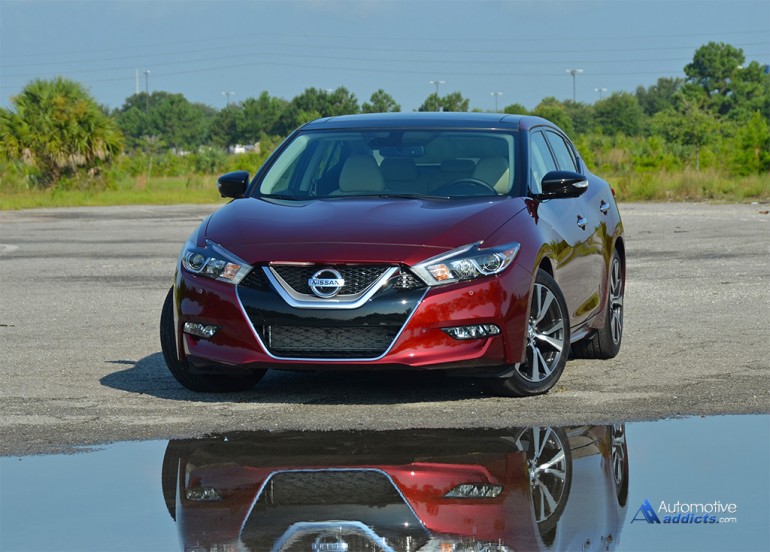 As a kid, I can recall the many summers of going back to the birthplace of my folks. Each time, it was an exciting adventure when I could count on my grandparents greeting our arrival and I would later be set free to roam around the old house located in a quaint rural area of Alabama. There was nothing like it. Dirt roads and nearly 35 miles to the closest major store. It seemed that time had stood still and I could always count on coming back to where part of my own lineage first started. 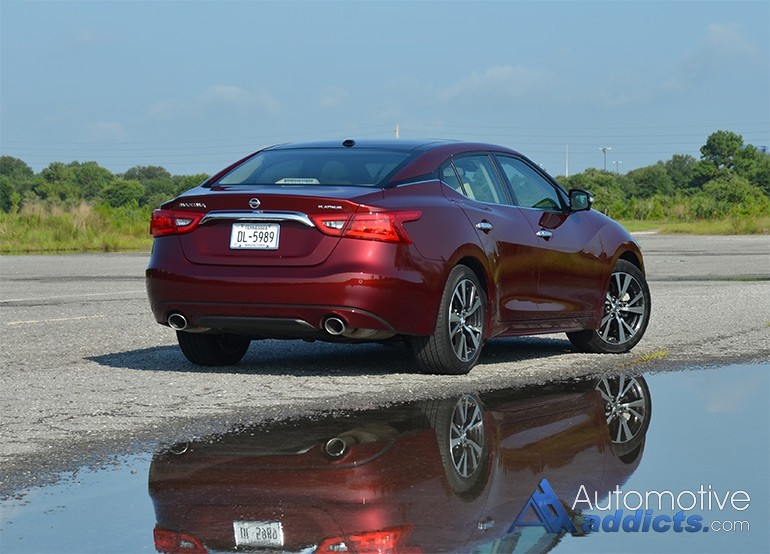 In my automotive career, I rarely have an opportunity to visit the birthplace of the many vehicles that I get to drive for review or ones I drive on those first-time-drive encounters. The landscape of America has afforded us a massively growing automotive industry that the masses can hardly comprehend outside of the cheeky commercials aired on TV, that brief test drive of the latest and greatest at a local dealership, or witnessing a passerby of something freshly off of the assembly line.

I consider myself truly blessed to have an opportunity arise from the folks at Nissan inviting me to tour their Smyrna, Tennessee plant, the birthplace for my recent test-drive vehicle, the all-new 2016 Nissan Maxima. 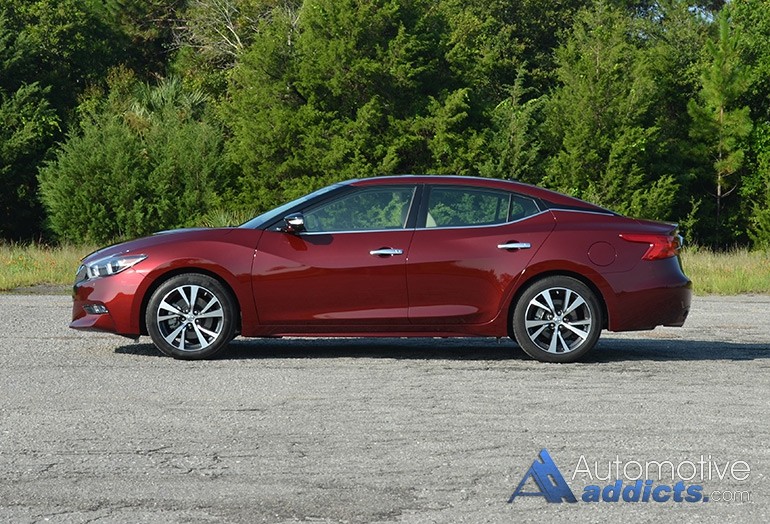 Setting out on my journey from Jacksonville, FL, Nissan provided the new 2016 Nissan Maxima in its top-level Platinum trim to take on a nearly 9 hour drive through the mountainous interstates and highways into Georgia and Tennessee. Not only was the scenery a testament to how beautiful America is, but it was a homage to the American lifestyle residing on such a vast and rich land. At the infancy of my trip I had no idea I was in for a once-in-a-lifetime treat upon my trek to Nissan’s Smyrna manufacturing plant. 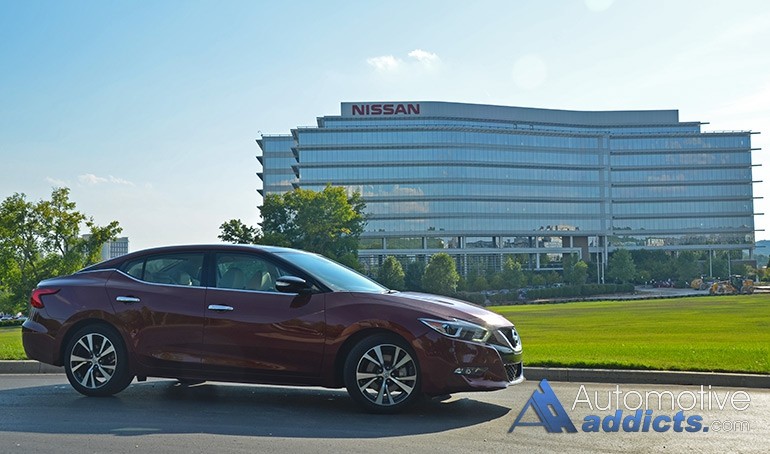 After arriving about 30 miles out from the plant, I checked into a hotel located within walking distance from Nissan’s North American headquarters. Waking up early the next morning and joining one of Nissan’s Regional Communications Managers, we set out from Franklin, TN for a nearly 30 minute drive out to Smyrna, which later titillated my senses as the horizon gave way to thousands of cars gleaming in the bright morning sunlight. 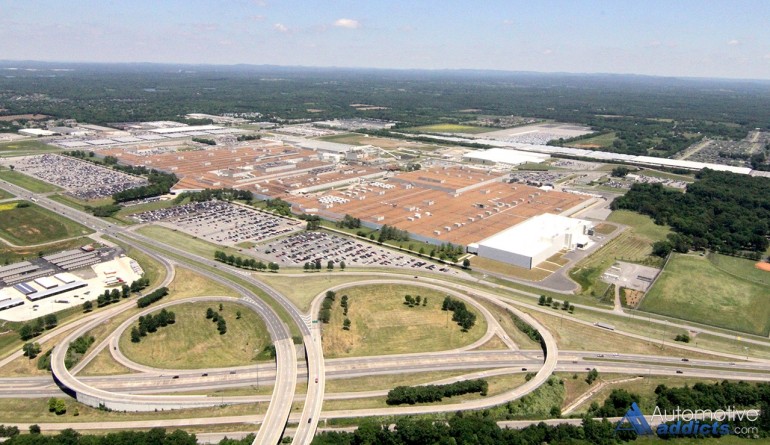 The white exterior of a massive structure slightly washed away the hovering sunrays whilst the red NISSAN letters embroidering a local cylindrical tower assured me of being in the right place. It was home. The Smyrna plant serves as home to my 2016 Nissan Maxima test vehicle and millions of other Nissan vehicles produced for over 30 years. 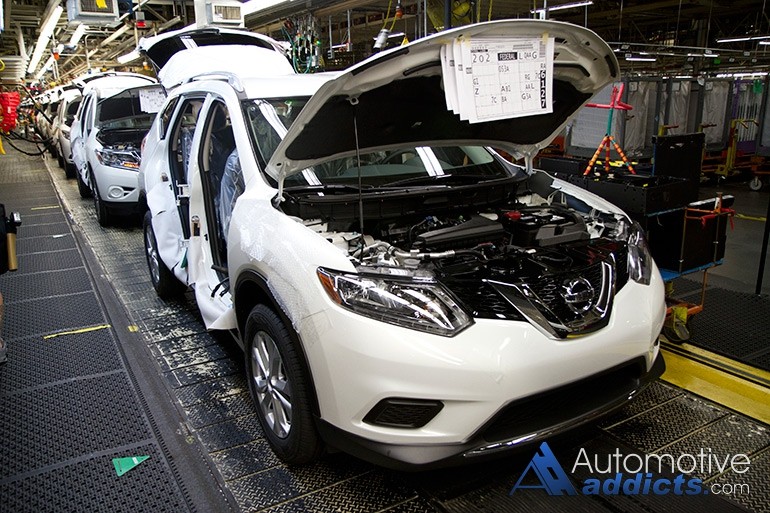 The Nissan Smyrna plant is not only home to the Nissan Maxima, but since 1983 the facility has been the birthplace for over 10 million Nissan vehicles starting with a white Nissan Pickup truck, the very first vehicle to roll off of the line. Currently, the plant is the production home for the Nissan Maxima, Altima, Rogue, Pathfinder, Leaf and Infiniti QX60. Under a roof housing almost 6 million square feet of groundwork, the Nissan Smyrna plant has captured the crown for the top-producing plant in the nation. To retain this prominence, the plant is able to produce a completed vehicle every 27 seconds – an exemplification to American ingenuity, advanced technology and hard work.

Upon my tour of the facility, it was apparent that the estimated 8,000 hard working Americans at the plant all take pride in their amazing feat of building a record 947,558 vehicles last year.

There is no denying the strong Japanese roots of Nissan. Continuing that presence in the USA as a Japanese based company, the American facet of Nissan and Infiniti vehicles is a growing force that has built upon our country’s up rise of homegrown industries. In this instance, many Japanese vehicles are now more American than some domestic originated counterparts. For one, the Toyota Camry is now the most American vehicle sold here in the states. The Nissan Altima, birthed from Nissan’s Smyrna plant, is currently the second best selling automobile in the country and is also considered an American vehicle as are a growing precedence of other vehicles produced in American-based Nissan facilities around our beautiful country.

The camaraderie witnessed first hand from my factory tour embellishes our American pride in building nearly 1 million Nissan and Infiniti vehicles within a year’s time at the Smyrna plant. The many technological aspects riding off of the just-in-time inventory system envelop a strategic task at hand for each of the Smyrna plant’s 8,000 workers that make vehicles for us here in American and many other countries around the world. 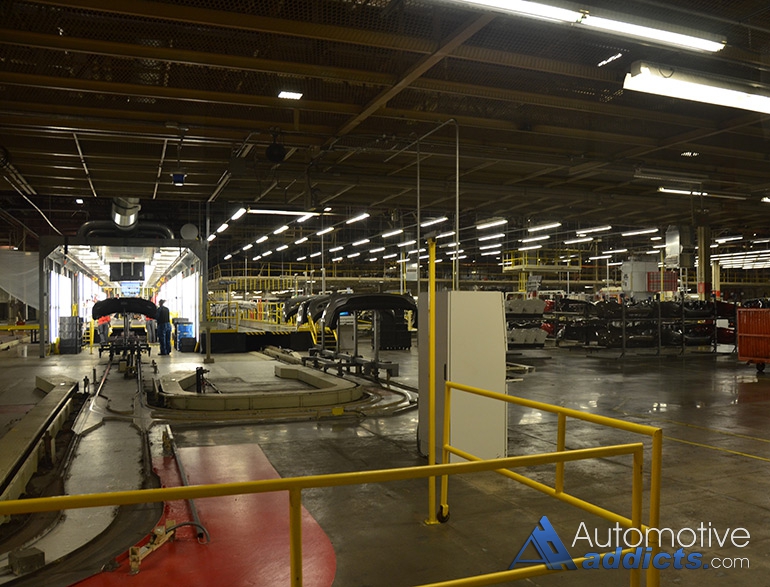 From the massive steel stamping machines, to the air-tight paint shop, to the pre-delivery inspection line, the Nissan Smyrna plant hums along at the speed and quality of hard working and highly-trained Americans. Witnessing the new Nissan and Infiniti vehicles roll off of the assembly line brought a sense of pride when I later stepped back into my Nissan Maxima test vehicle. Seeing many of my Maxima siblings come together from several sheets of steel, stacks of aluminum, molded injections of plastics, and formulations of masterfully-crafted glass, all collimate a well-built and designed vehicle. It is as if there was a live symphony orchestra recording building through the middle of the chorus making way for the grand conclusion that is later packaged and sold as a part of a complete album. Nissan’s Smyrna plant has an unfailing perpetual beat that is greatly respected in the automotive industry. 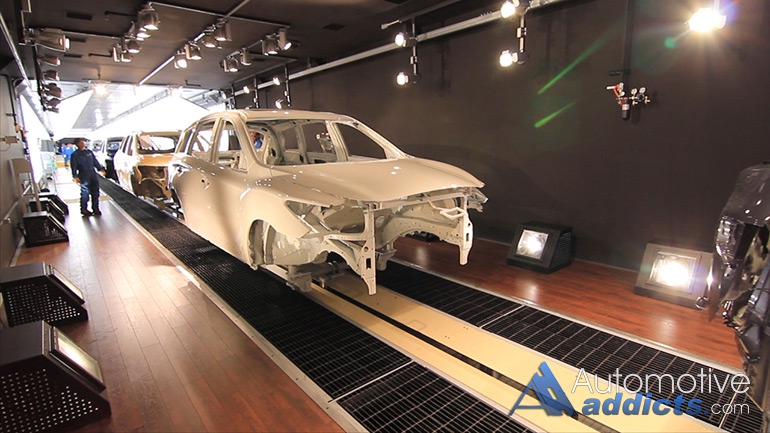 Having owned many Nissan and Infiniti vehicles over the years, my positive assessment of the brand has never been stronger now that I have taken one of their prided creations back to where it was forged into an amazing concept on 4 wheels. 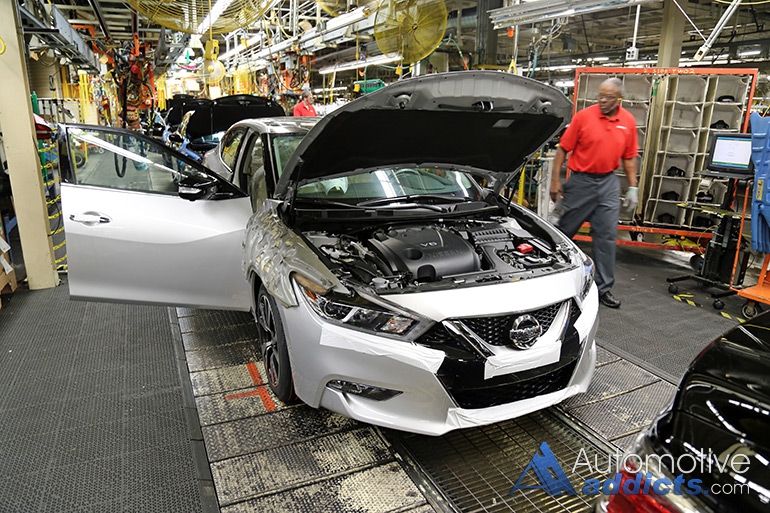 I have my own enthusiastic enmities with the new 2016 Nissan Maxima in its claim to being a Four Door Sports Car (4DSC) as it sports a CVT (continuously variable transmission) and front wheel drive. Though, after driving the new Maxima on the long haul to Tennessee, I can attest to the comfort and willing drivetrain to be among the best of its kind. The comfort of the vehicle on my trip placed it in a class that I considered to be among luxury counterparts that cost nearly twice as much as my top-trimmed Maxima Platinum.

I was able to get a steady 31.2 mpg on my 600-plus mile trip, besting the EPA estimated 30 mpg highway figure. Around town I saw 22.7 mpg nearly matching the new Maxima’s city EPA estimate of 22 mpg. 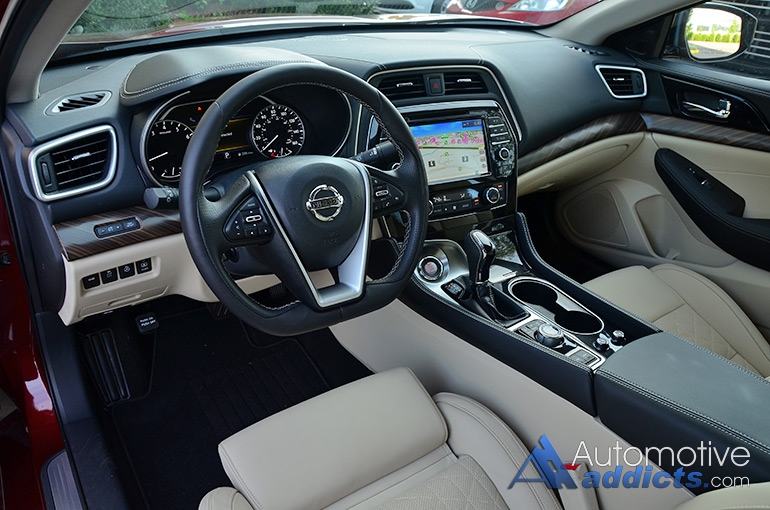 Seeing behind the scenes though the inner workings of how the new Maxima is built only furthered my gratification for what I considered to be one of the best front wheel drive mainstream sedans currently on the market. Its 300 horsepower from a nearly perfected 3.5-liter V6 engine coupled with an excellent ride quality with the right mix of sport and comfort thanks to its ZF Sachs dampers, nearly pushes the that fine line of mild sports car lurking underneath; a family sedan propelled by its front wheels. 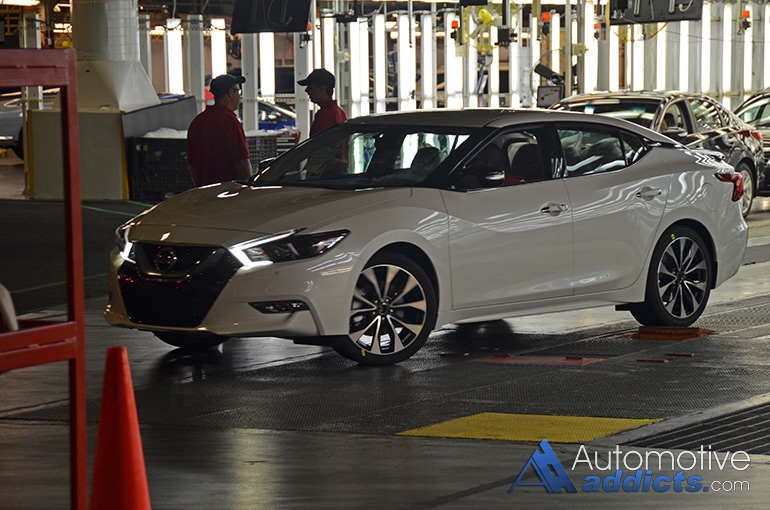 Sure, there is much to be desired on the enthusiast base when it comes to the new Nissan Maxima. However, the sum of its parts formulating a compliant vehicle that attracts discerning buyers, including a large percentage of minorities seeking something bold enough to stand out from the crowd, the 2016 Maxima is one-of-a-kind that those at the Smyrna facility can be proud to have built.