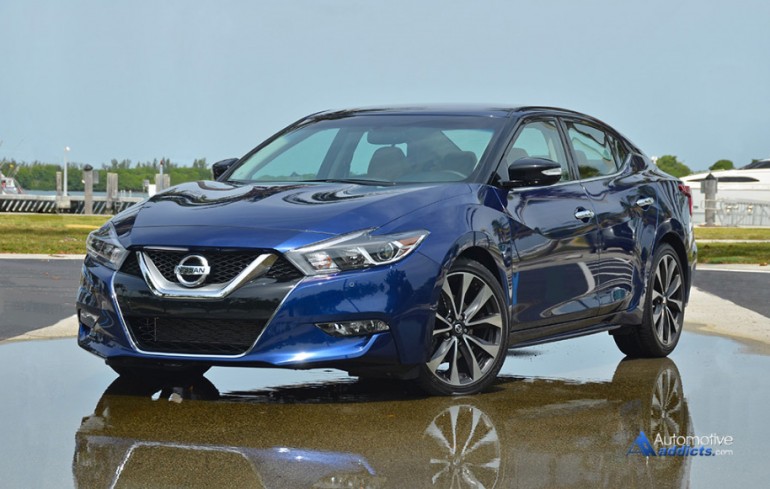 Nissan’s enthusiasm is shining brightly as they take bold steps to bring stunning concept designs straight to production form without taking much away from the initial design. This concept has proven to win over those who want to stand out in the crowd and partake of something original in the sense of their prided choice for an automobile. With the new 2016 Nissan Maxima, that formula has proven to be quite attractive and backed up by a solid drivetrain and feature content that takes today’s tech and simplifies its usefulness.

The new 2016 Nissan Maxima, embarking on its long journey into its eighth generation, has always been a highly sought-after vehicle as an alternative to the mundane sedan offering within the same segment. With that enthusiastic trait found in the Maxima, Nissan eventually dressed it up in a “four door sports car” moniker, which captivated a select audience. Today, that 4DSC moniker is back and relevant in the aspect of Nissan selling a complete mid-sized sedan package with 300 horsepower and 261 ft-lbs. of torque from a retuned 3.5-liter V6 engine – a powerhouse in the brand that gets better with age. 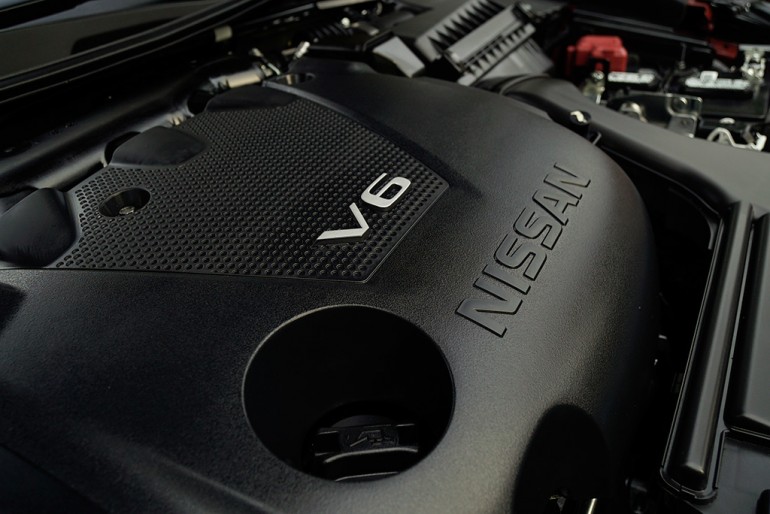 Mated to an updated and reworked Continuously Variable Transmission (CVT), the new 2016 Maxima harkens an uphill battle to properly claim its 4DSC nomenclature. Though, after driving the new Maxima in the sporty SR trim, it has proven to be quite the performer and the CVT unit is among the best I have ever experienced. 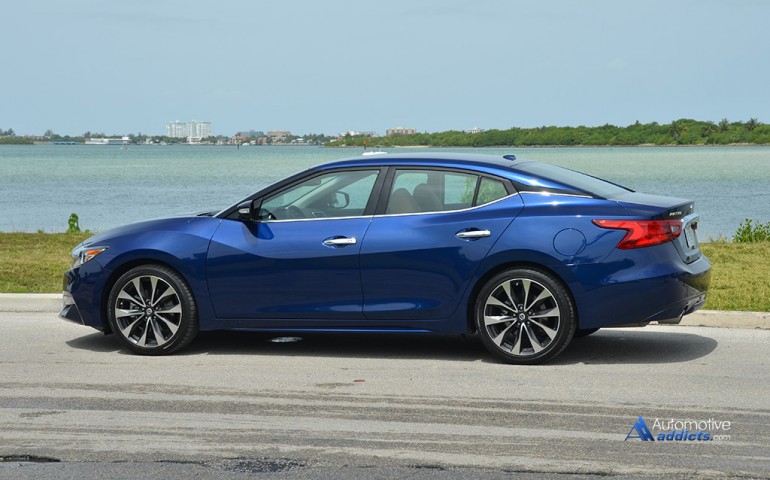 The new CVT has drop-down simulated shift points and it nearly eliminates that rubber band feeling through its proactive programming that allows the 3.5-liter V6 to surge through its power band much like it would if paired to a conventional automatic transmission. The succession of power in the Normal or Sport drive modes proves an urgency of the drivetrain to propel the boldly-designed 3,564 pound sedan to 60 mph in just 5.5 seconds.

The CVT is quick to find a proper ratio and tends to lock up the torque converter at the right moments for a direct feel, in addition to moments that conserve fuel with rpms as low as 1,000 rpm when strolling around 50 mph or so. EPA fuel consumption figures, thanks to the new Maxima’s nifty engineering in the V6 engine and CVT, comes in at 22 mpg city, 30 mpg highway and 25 mpg combined, that’s about a 15% improvement over the outgoing model.

The ride comfort and handling are a nice balance of smoothness and just the right spring and damper rates to keep things from being overly jarring through the use of ZF Sachs shocks. The larger 19-inch wheels on the Maxima SR, the choice vehicle for our short initial spin, add to the stability of the Maxima making it feel alive and confident in most driving situations on public roads. Everything about what we experienced in our short drive proved to live up to what you expect in a sports sedan other than the fact of it being front wheel drive and the looming thought of a CVT. However, such a setup would prove to be useful in winter-snow climates in northern states. 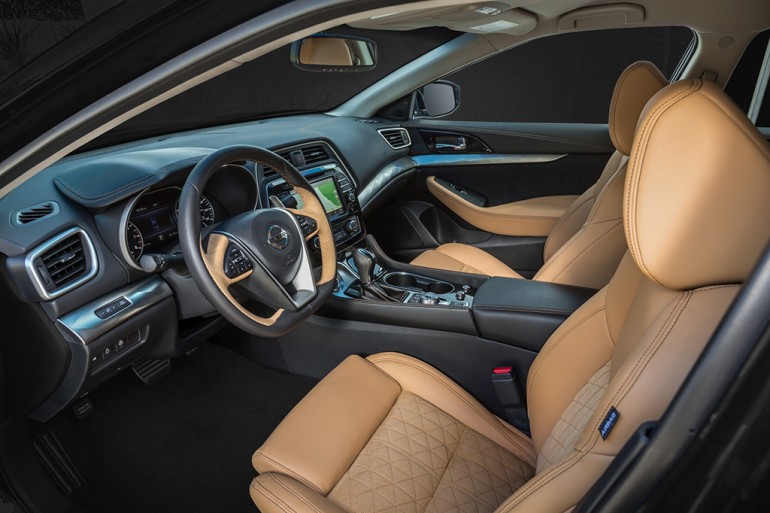 The new 2016 Maxima has an approach that Nissan is willing to take a chance on with its interior and exterior designs. From the floating look of the roofline due to blacked-out pillars, to the sharp curves and angles of the body work and lights, the new 2016 Maxima is a bold move that works in the eyes of enthusiasts and those who take the road less traveled.

The makeup of the Maxima’s sporty and unique character can be had in many different pre-configured flavors through five different trim levels. With this new approach, features and options are grouped in a preset method where the base S trim starts things off right with several desirable features. Moving into each upper trim level adds on features, which are not available for single selections or option packages. Basically, Nissan has taken on the approach used by Honda and Acura for many years, which seems to work to give consumers a high level of vehicle availability within each selected trim level – the goal to never leave anyone without something they wanted when they plop down the admission prices ranging from $32,410 for the base S trim all the way up to the top-level Platinum trim at $39,860. To the benefit of the price range, you won’t be expected to pay anything more as the feature and options are already included in each trim level preset for all trims in the order of S, SV, SL, SR and Platinum. 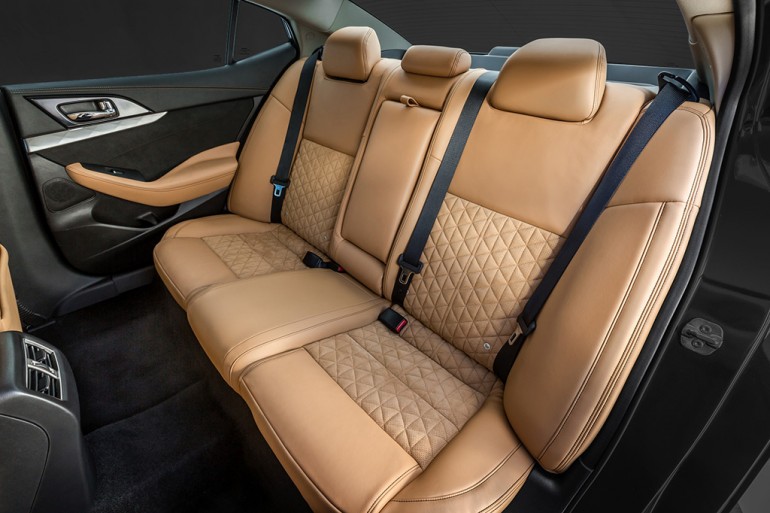 Three out of five of the trim levels include the package of active safety features, such as Predictive Forward Collision Warning (PFCW), Intelligent Cruise Control (ICC), Forward Emergency Braking (FEB), Rear Cross Traffic Alert (RCTA) and Blind Spot Warning (BSW). Combined with an interior that takes its design cues from a jet fighter, and Zero gravity seats inspired by NASA with Ascot leather quilted inserts, the Maxima’s cabin radiates a nice taste of luxury without diminishing its sporty appeal. The controls are in close proximity to the driver and the new 8-inch infotainment screen quickly reacts to your touch with pinch-to-zoom and swiping gestures while the system retains a high level of control redundancy from the center console’s central toggle control to dashboard buttons and limited steering control buttons. 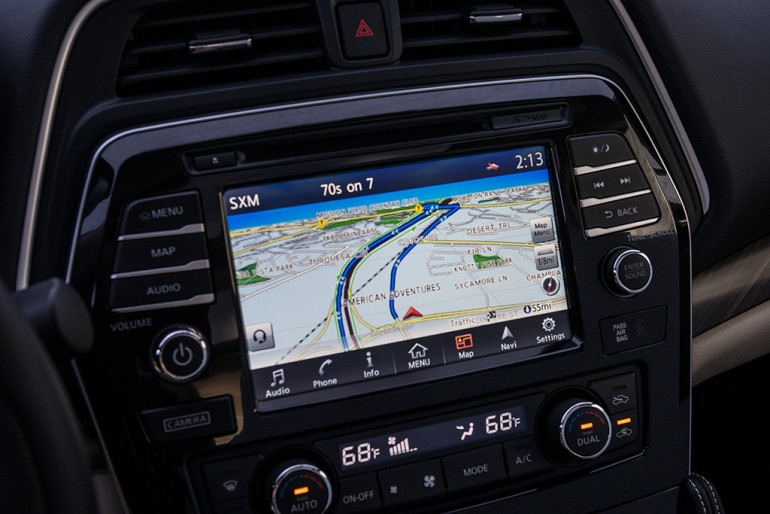 The new 2016 Nissan Maxima has taken a giant leap in design for the brand and properly supports its looks with decent performance. As far as the Four Door Sports Car (4DSC) moniker goes, I will leave that classification choice to the potential buyers who get to experience the new Maxima for a longer term. With me being an automotive enthusiast and one who has been groomed to never group a CVT transmission with anything sporty, let-alone a front wheel drive setup, Nissan may have crossed that fine line – or at least moved the line a little to appease light hearted enthusiasts who aren’t the discerning type for such stunning and sporty-looking midsized sedan. Still, I totally get it and await to spend more time in Nissan’s latest Maxima – a vehicle that I am content in recommending to others before considering that next purchase.