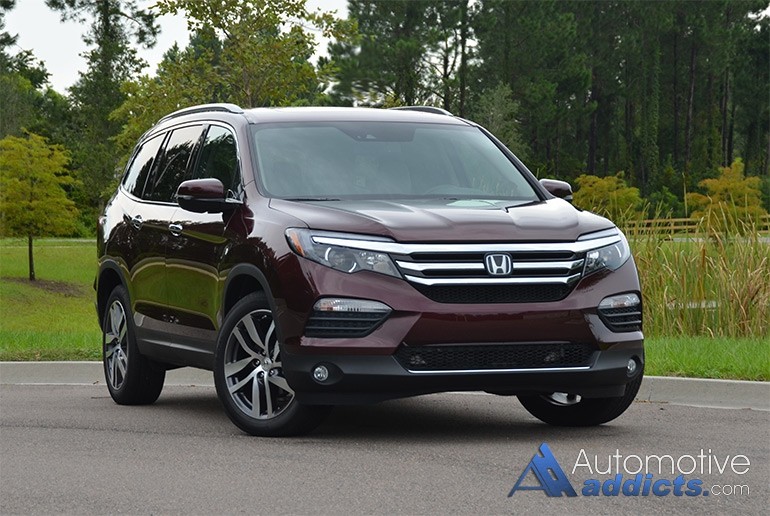 Here in America the crossover utility vehicle segment is heating up making unprecedented strides to win over a wide array of consumers. In many ways, crossovers are taking the place of minivans and mainstream sedans as several new conceptions vie for a streamlined transition from such vehicles. Honda, who has recently made some serious strides with complete redesigns of a few top sellers, has included their prided three-row-seat Pilot crossover in the redesign mix to bring forth a vehicle that I can say has truly become better in every conceivable way for the 2016 model year. The 2016 Honda Pilot just may be one of many considerable crossover choices for those who may have otherwise opted for a minivan. 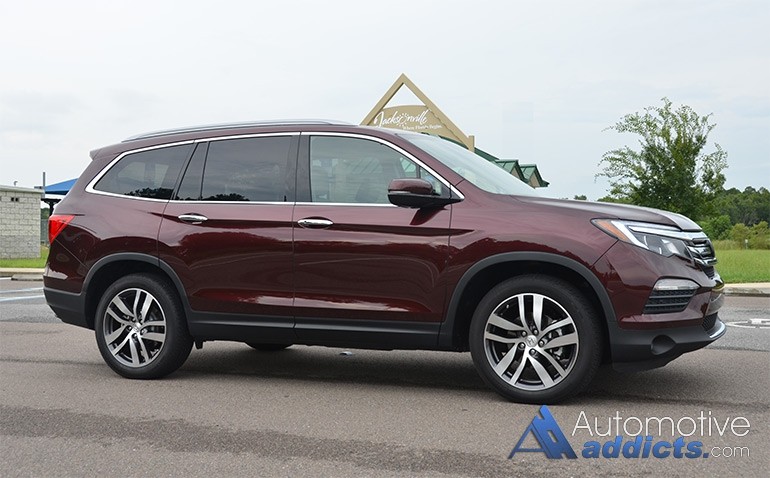 The all-new 2016 Honda Pilot departs from its outgoing model defying its traditional boxy structure for a smoothly sculpted and carefully enlarged utilitarian vehicle fit for families who seek the adaptability that comes with the new-age crossover evolution. To put it bluntly, crossovers are dominating in ways unseen decades ago and the new 2016 Pilot is a major step in the right direction, which isn’t a bad thing at all.

Featuring a stylish look, the 2016 Honda Pilot provides ample room for 7 or 8 passengers dependent your choice of its offered five main trim levels, LX, EX, EX-L, Touring and the top-level Elite trim of my test vehicle. In true Honda fashion, the trim levels group features with a few option choices. Within each trim, 2WD or AWD remain to be one of the few configurable choices apart from the Elite having AWD as standard in the form of an Intelligent Variable Torque Management AWD (i-VTM4) System. 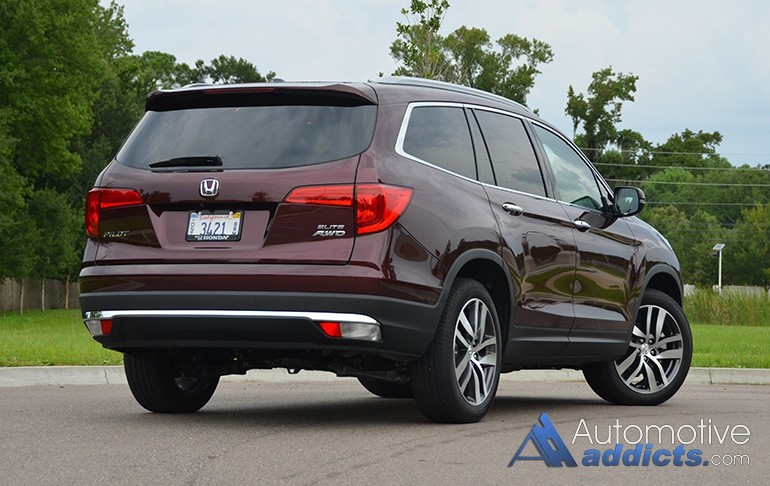 Opting for the Elite trim or configuring the other trim levels with the Intelligent AWD system will afford you the ability to select one of 3 terrain modes within the system; snow, sand or mud. The new AWD system and its selectable terrain modes takes up the place for those select few consumers who relished the outgoing model’s 4WD VTM-4 lock-up for those that dared to venture off of dry paved roads. Use of the new 2016 Honda Pilot’s Intelligent AWD system has so far proven to be quite adaptable to loose terrain in my quick test in sand – all four wheels kept spinning while forward momentum kept the vehicle from getting stuck. It’s quite ingenious on Honda’s part for a vehicle that seems too plush to get dirty. 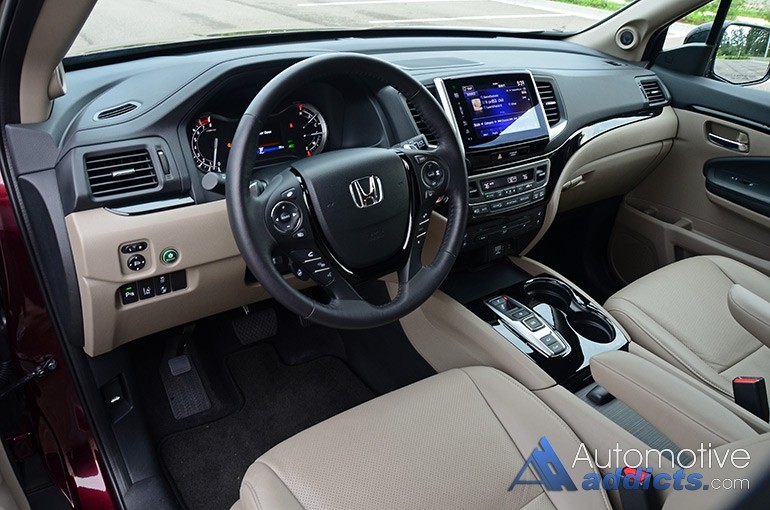 Speaking of plush, the new 2016 Honda Pilot is rather smooth in its ride quality. Like it’s up-classed Acura MDX sibling, the Pilot limits road noise thanks to extra sound dampening materials, an acoustic windshield, and thicker front window glass on the EX-L trims or higher.

My Honda Pilot Elite proved to be quite the subdued road cruiser with a cushy ride quality followed up by a soft but composed rebound going over road imperfections. Steering response was mostly void of feedback from the road but proved to be nicely weighted at speed. 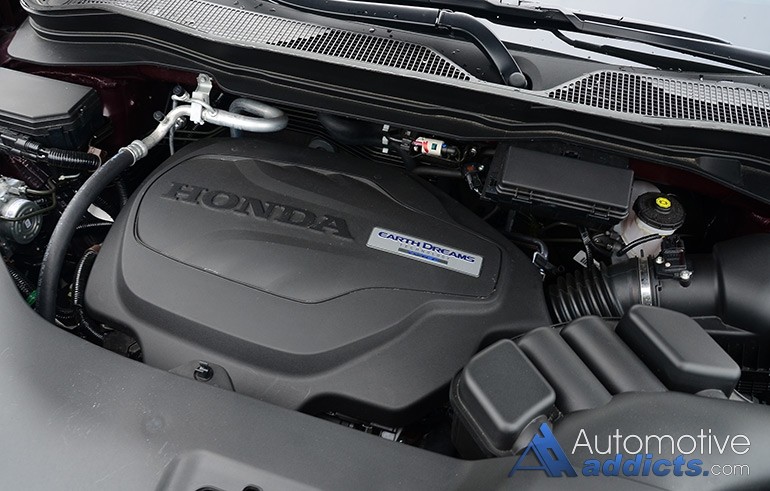 Powering the new 2016 Pilot is left to Honda’s latest Earth Dreams 3.5-liter V6 workhorse tuned to 280 horsepower at 6,000 rpm and 262 ft-lbs of torque at 4,700 rpm. The V6 engine conforms to be an ample powermill for the larger proportioned Honda Pilot, even more so now thanks to the 9-speed automatic transmission. The 9-speed unit, currently exclusive to the Touring and Elite trims (6-speed automatic equipped on other lower trim levels – LX, EX, EX-L), shifts smoothly through each gear giving the Pilot nice initial acceleration out of the hole thanks to its relatively short lower gears. There isn’t much unnecessary hunting for gears when power is demanded while at cruising speeds. The push-button shifter, taken from the Pilot’s luxury-branded Acura siblings, takes a lot longer than I would like to shift into gear from park and even longer on those shifts from reverse into drive, or vice versa – a trait I noticed in the Acura TLX, which uses the same 9-speed ZF-sourced unit (also found in new 2016 Acura MDX).

Running to 60 mph from a start requires a tad over 7 seconds. 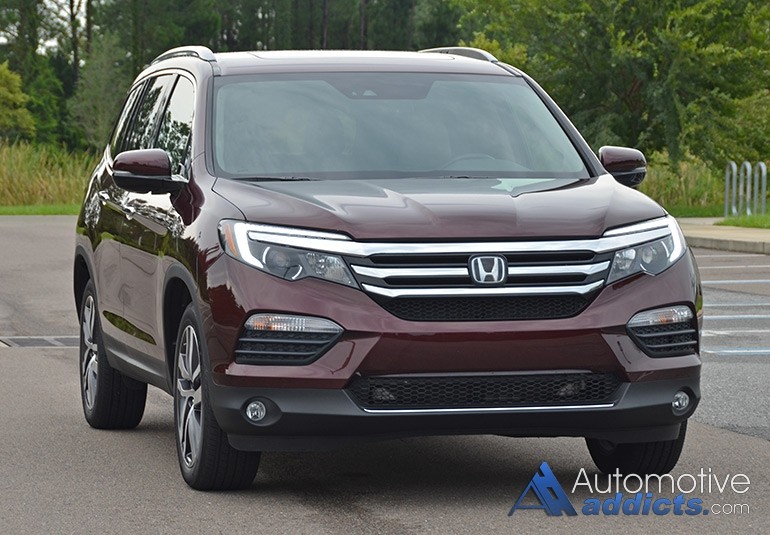 With the initially smooth ride quality, the new Honda Pilot has a balance that can be easily unsettled in one direction, but still proves to be quite the improvement over the outgoing model thanks to its lighter weight, losing about 300 pounds, and a completely revised suspension. The improved nimbleness of the Pilot is acclaim to the tuning of the suspension dampers and the large 20-inch wheels that come equipped on the Touring and Elite trims. Parting ways with the outgoing Pilot’s attempted truck-like look and feel, the new 2016 Pilot is more Acura than any other SUV offering from the brand, which is a good thing. 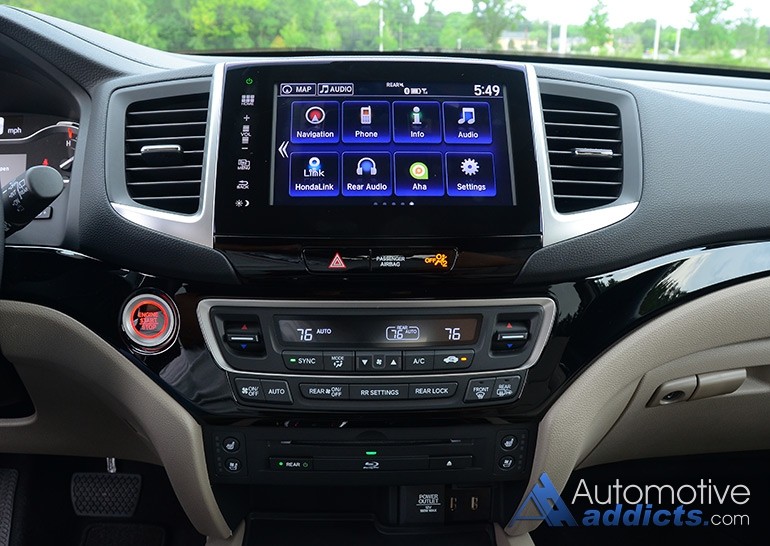 In Honda’s tradition, the new Pilot isn’t left out of the economical pasture that most of the lineup grazes on the side of modest EPA fuel consumption estimates. The new 2016 Honda Pilot in the Elite AWD trim gets 19 mpg city, 26 mpg highway and 22 mpg combined. The 2WD models equipped with the 6-speed automatic get 19 mpg city and 27 highway while the 9-speed automatic-equipped Touring trim with 2WD gets 20 mpg city and 27 mpg highway. 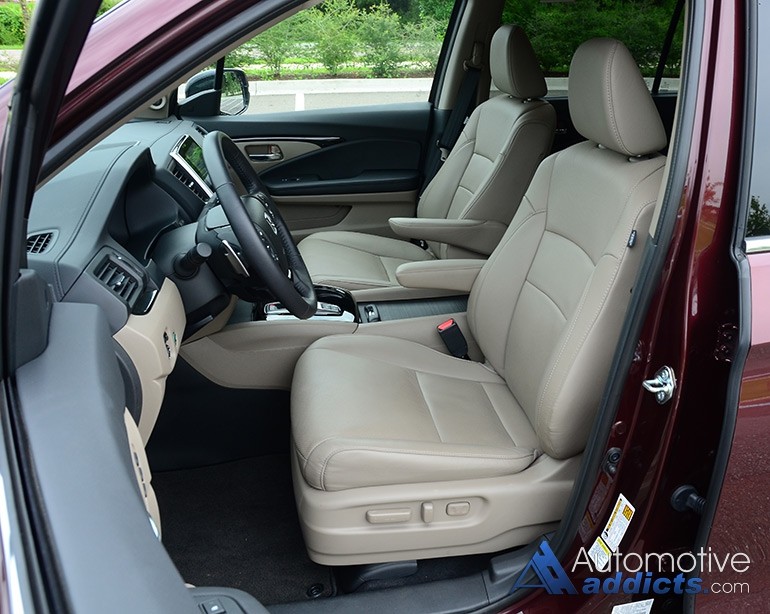 Surprisingly, my trip around town with about 75% highway driving equated to just over 27 mpg besting the Pilot Elite AWD’s 26 mpg EPA highway figure. Taking on short city roads with several traffic light stops enabling the start-stop system, I came away with 19.6 mpg, still slightly better than the EPA estimate. 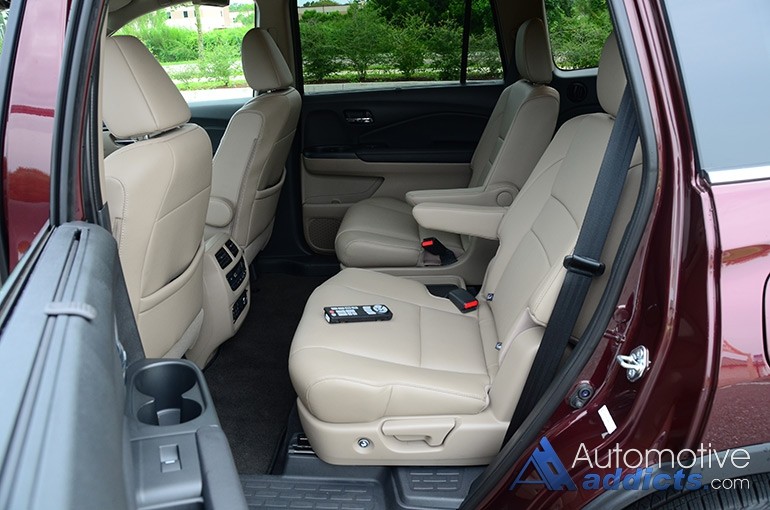 The cabin of the new 2016 Honda Pilot Elite exemplifies a nice plushness that rivals many three row luxury crossovers. Much of the plastic and ample soft-touch areas of the dashboard and cabin left room for the Pilot’s Acura siblings to have their limelight in the lap of luxury. However, the loaded up Pilot Elite proved to have just about every creature comfort and luxury amenity you would want if you were seeking a luxury branded crossover that seats at least 7 passengers. In its larger dimensional mold, the Honda Pilot Elite seats front and two captain chair middle row passengers in style. Unfortunately, the major disappointment for the cabin remained to be the third-row seating being slightly difficult to access even with the assistance of the clever one-touch sliding second-row seats. 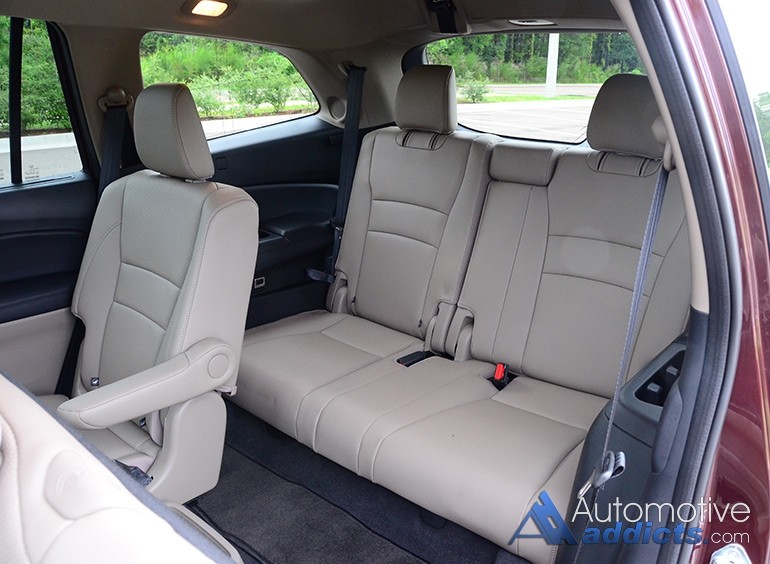 Honda took on a new approach for the infotainment system by departing from its dual-screen setup in place of a single glossy fingerprint-collecting touch screen that combines all aspects of entertainment, navigation and settings in the same unit. The move is thoughtful and takes notes from consumers who had a discernment of the two-screen setup found in many late model Honda vehicles. However, even though the unit proved to clean up the dashboard, the system faltered with its slow responses in several functions. Additionally, the lack of physical volume knob in place of the touch capacitive slider area may not agree with everyone and the driver will be forced to utilize the steering wheel buttons. The use of Garmin-sourced navigation mapping is a slight improvement for the system while the availability of Apple CarPlay coming around to select Honda vehicles is also a major plus to make up for the slow responding interface. 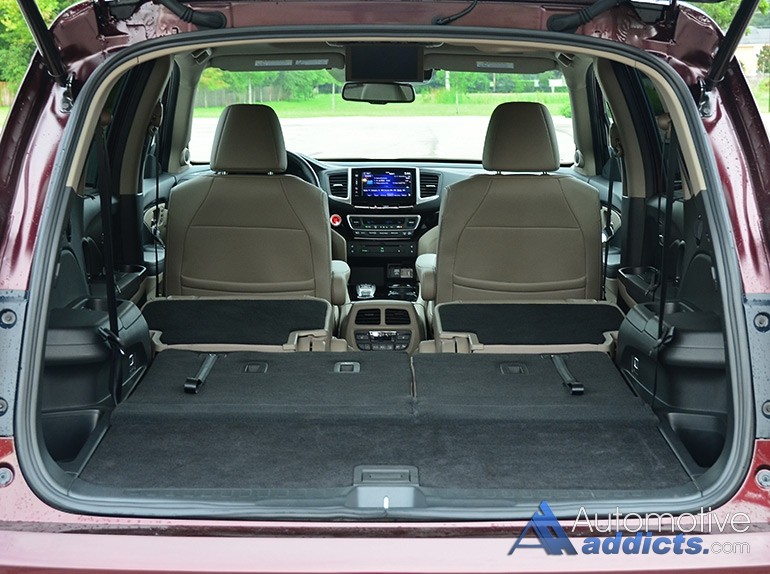 My top-trimmed 2016 Honda Pilot Elite comes with many desirable features and luxury amenities – Click here to see all the amenities of the new 2016 Pilot.

Honda has placed the Pilot in a new realm to rub shoulders with up-classed three row crossovers. The long feature packed list of amenities with an as-tested price landing at $47,300, further pushes the luxury envelope. Mind you, the 2016 Honda Pilot in its base LX 2WD trim can be had at the starting price of $29,995 before the destination and handling charge. Certainly, the new 2016 Honda Pilot is a three row crossover you don’t want to overlook.