America’s thirst for large body-on-frame SUVs is still going strong even though there are slim offerings in such a niche segment. Among the large SUV segment, Lincoln thrives to stay relevant among its short list of mammoth-proportioned competition with a design refresh and new engine for 2015. 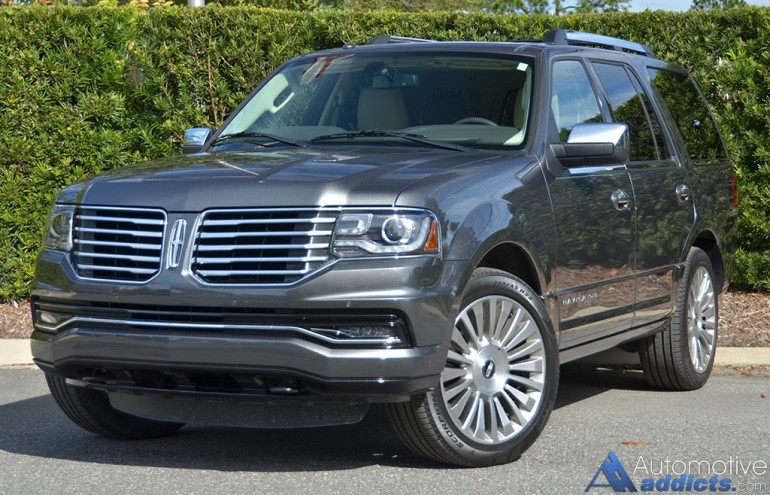 For the 2015 model year, the Lincoln Navigator receives a major update with a new EcoBoost V6 engine in place of the old V8, updated interior, and a redesigned front and rear end. The new engine choice, a 3.5-liter turbocharged EcoBoost V6, is a desirable offering considering its respectable output at 365 horsepower and 420 pound-feet of torque, much more than the outgoing V8’s 310 horsepower and 365 lb-ft of torque. The new EcoBoost engine permits the new Navigator to move forward with authority getting its 5,800-plus pounds up to 60 mph in just 6.7 seconds. The power band is somewhat narrow but at its peak torque range, starting at about 2,500 rpm, the Navigator out of its own way and some – occasionally spinning the rear tires while in 4×2 mode.

>> Get the best price on the Lincoln Navigator from a network of local dealers now. << 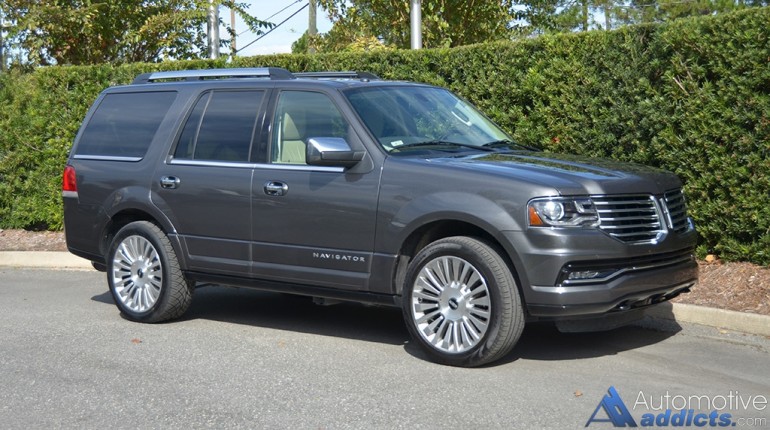 With the new engine choice, the Navigator improves upon its fuel economy numbers now getting as much as 16 mpg city and 22 mpg highway for the standard two-wheel-drive normal wheelbase variant. Moving to my test vehicle’s all-wheel-drive configuration, you will expect to get a consistent 15 mpg city and 20 mpg highway, still quite on the side of drinking copious amounts of fuel but slightly better than the outgoing V8 4×4’s hunger at 13 mpg city and 18 mpg highway. 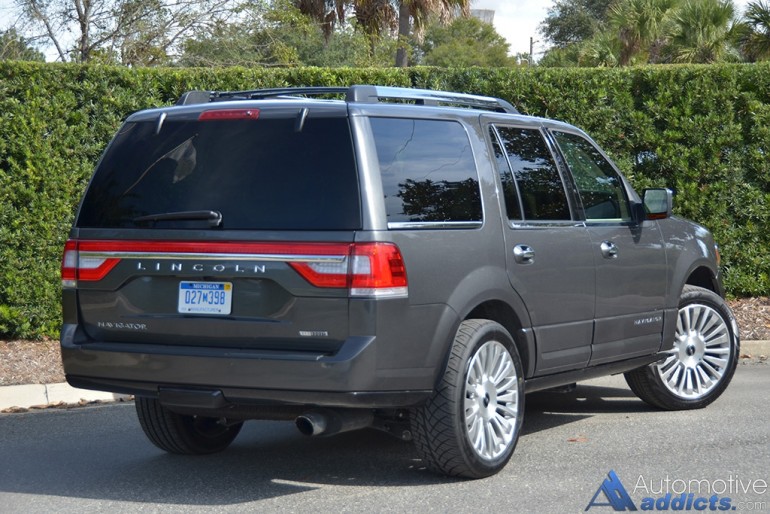 The new 2015 Lincoln Navigator is easy to “navigate” and maneuver thanks to its compliant ride, remarkably tight turning radius, and a sense of you driving a vehicle much smaller than it is. The initial perception in the driver’s seat of the Navigator is that you are piloting a much smaller SUV only giving away to its heft and mammoth proportions when you enter into a turn too hot or sway left to right abruptly. Otherwise, it is a surprising stretch to find the Navigator’s limits in the confinement of law-abiding driving around town. The massive 285/45R22 all season tires wrapping 22-inch 20-spoke polished aluminum wheels do the trick to keep things civil without emitting unwanted chassis vibration thanks to the stable and smooth-riding adaptive suspension system in either of its three modes (sport, normal, comfort). 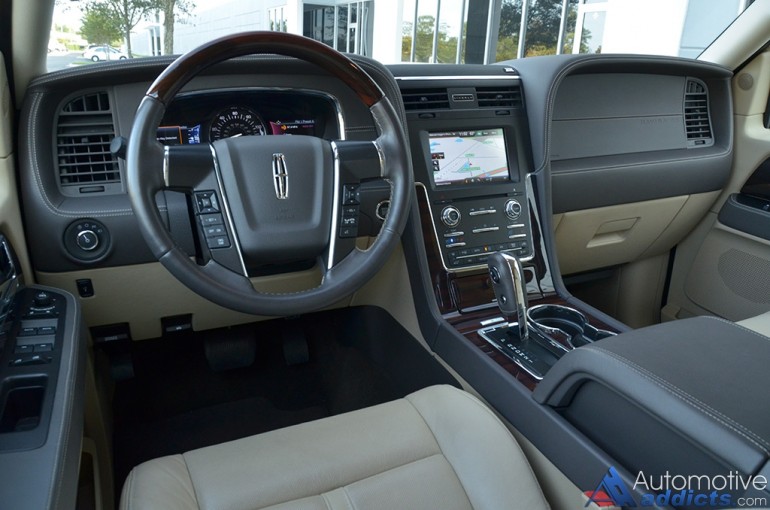 Offering the new Navigator in its standard wheelbase version or the Navigator L featuring a 135-inch wheelbase, Lincoln attempts to fit the mold that GM does with the Cadillac Escalade having a short and long wheelbase version. In my test vehicle’s shorter wheelbase setup at 119-inches, the Navigator offers up plentiful interior and just enough storage with 18 cubic feet of cargo space behind the 3rd row of seats while in place. Putting all seats down in my Navigator test vehicle opens up the cargo volume to just over 103 cubic feet. Opt for the longer wheelbase Navigator L and you will have an expansive 128.2 cubic feet to work with having all seats down. 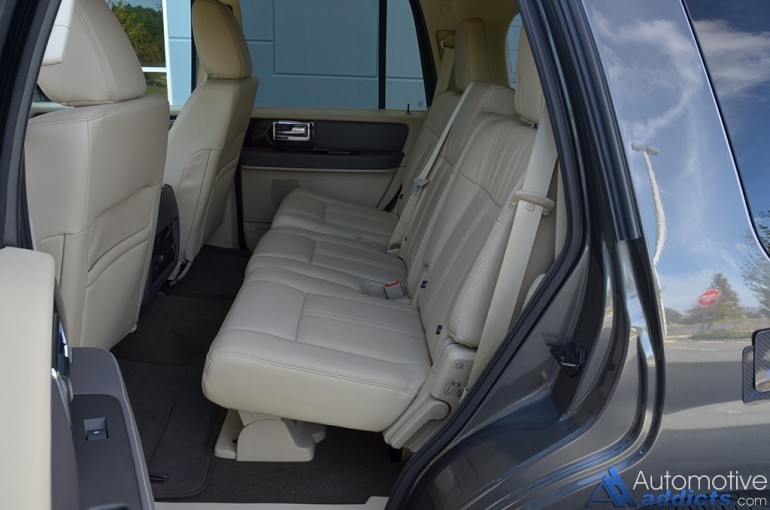 The interior of the 2015 Navigator pulls much from its Ford F-150 distant relative only laced with ample amounts of accent-stitched soft touch materials through a unique dish-like designed dashboard. Use of the infamous Sync system, dubbed as the MyLincoln Touch interface, doesn’t do the Navigator any favors by retaining the same slow-to-respond touch screen and smallish on-screen buttons. However, the use of physical buttons on the dashboard as opposed to other Lincoln vehicles having a capacitive touch setup is a welcomed trait – the controls actually work and you know where to press all the time. 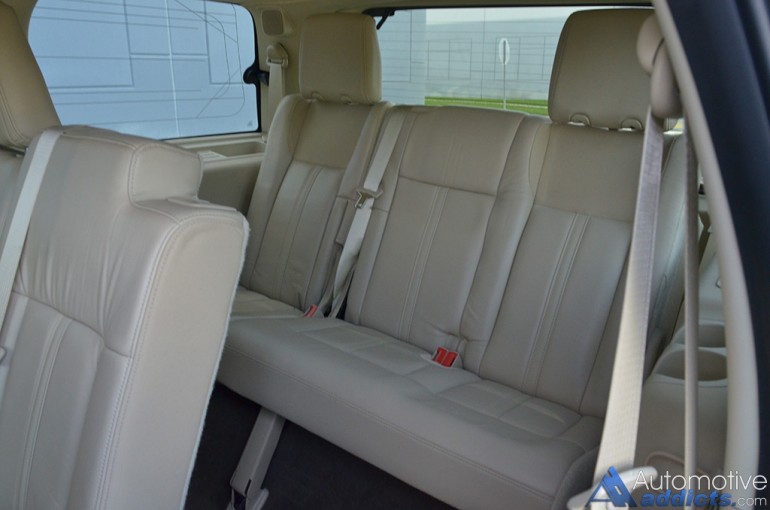 The seating of the Navigator proves to be comfy but lacks the easy of versatility when it comes to folding or moving the second-row seats out of the way for third-row access or opening up additional cargo space. The old method of fold-and-lift to gain entry to the third-row is, old and cumbersome. 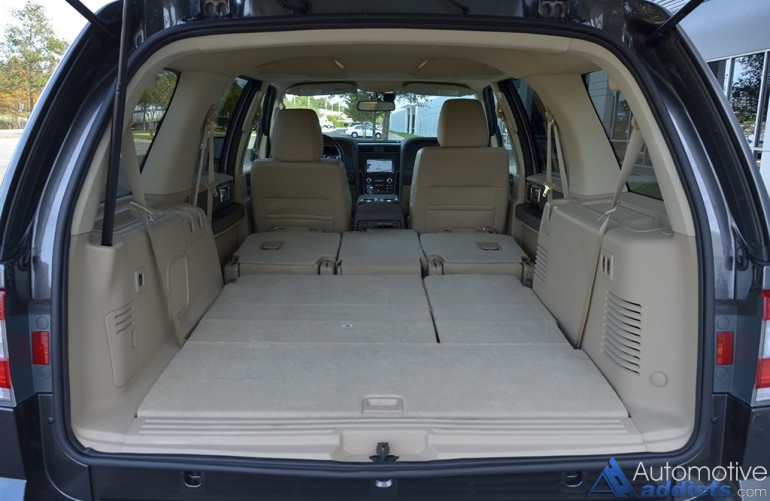 The collective offering of the updated 2015 Lincoln Navigator sits quite well for an alternative for the small segment of large SUVs. The pricing of the new Navigator, starting at just $63,195 for the standard 4×2, tends to undercut some of its direct luxury-appointed competition. At such a price, the Navigator remains to be relevant considering how it lacks some of the true exclusive luxury appeal that some of its competitors offer. The as-tested price for my loaded up Navigator 4×4 comes to $73,895 including a $995 destination and delivery charge.

>> Get the best price on the Lincoln Navigator from a network of local dealers now. <<