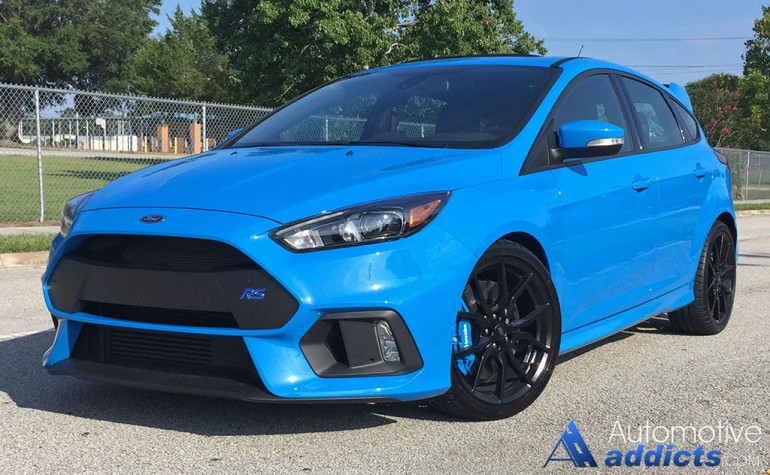 For many obvious reasons Ford is a historic automotive brand that has afforded to appease hardcore enthusiasts and everyday folks in many ways, on top of making racing history year after year in many facets. There is a celebrated lineage in Ford’s RS line that surrounds Rally racing, and the latest introduction of the Focus RS brings back a bit of that winning tradition for those who want to feel like a champion on public roads and occasional track days.

>> Get the best price on the Ford Focus RS from a network of local dealers now. << 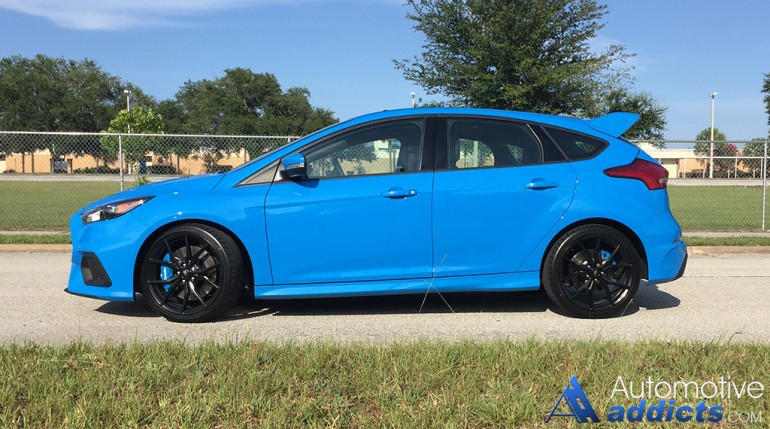 The new 2016 Ford Focus RS sports 350 horsepower and 350 ft-lbs. of torque from a turbocharged 2.3-liter inline 4-cylinder engine. Mated to the force-fed 4-banger is a 6-speed manual transmission, and to complete the package, power is directed to all four wheels through a clever twin-clutch-pack electronically controlled torque vectoring all-wheel-drive system that can distribute torque side-to-side or front and back – by as much as 70% to the rear. The power diverted to the rear can be split to each rear wheel by as much as 100% to alternate for a “special” effect when entering or coming out of a bend, which will, in essence, eliminate understeer and start some serious drift-hooning action with oversteer. I tried it out, and it worked for all of the 4 seconds I held my drift line. I was able to do this using the drift mode, one of the four dedicated drive modes (Normal, Sport, Track, Drift). 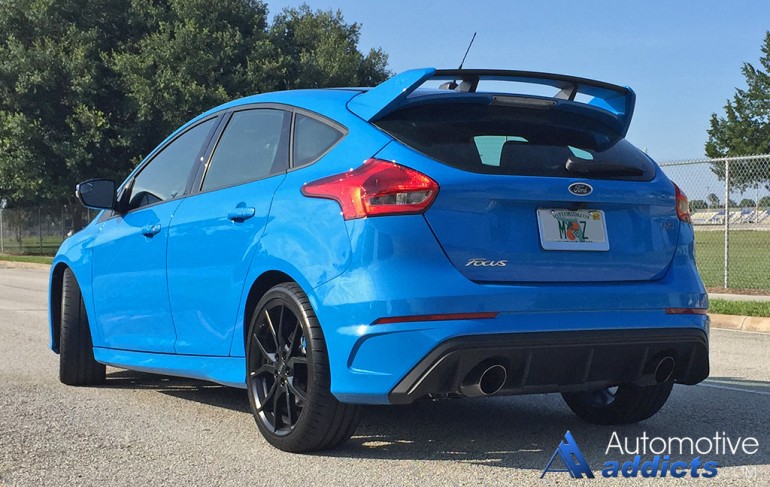 Placing the Focus RS into Sport mode opens up the exhaust a bit for a subtle clatter out back upon mid-throttle deceleration but retained the default setting for the adjustable dampers and steering feel. Track mode enhanced the RS to the point that stability and traction control seemed to take a literal back seat – as if there was some extra weight out back that allowed the rear end to come out in a small dose of oversteer. It was fun until I saw the cops – you have to believe me. Drift mode, well, that was fun but to respect my good friend that owned this car the rear-wheel power-biased action only lasted for seconds as the sticky Michelin Cup 2s looked to get burned up in a matter of minutes. I wonder how much they cost? 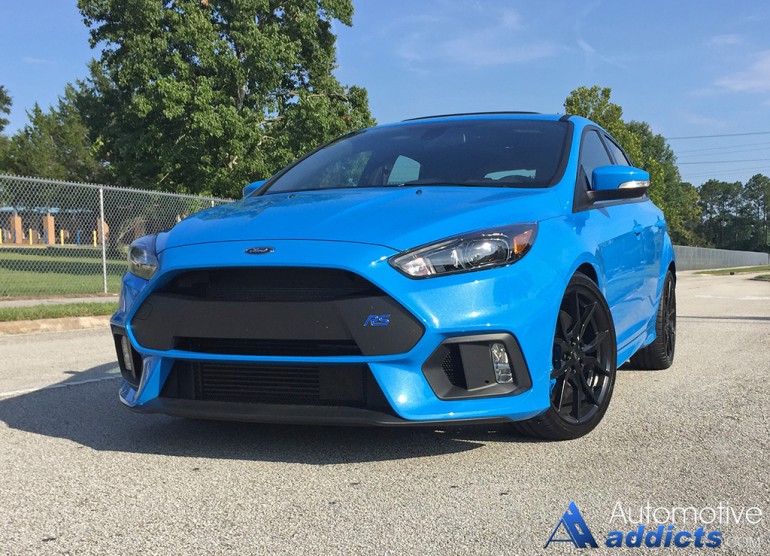 My quick impressions of the new Ford Focus RS fall in line of what I initially thought about the Focus ST when it made its debut, only there is much more substance here in the RS. The major difference is that the RS has more of an attitude and the added ability to fully enter and exit sharp turns carrying a much higher speed and the confidence of all four wheels riding on a virtual track by the way of the optional ultra-sticky Michelin Pilot Sport Cup 2 tires wrapping 19-inch forged wheels. Moreover, the RS is built differently, adding body rigidity and it has noticeably more pulling power than the ST. There was a slight drop off near redline as if it was an invisible shift notification just before the actual “RS” logo shift light emitted letting you know to slip the 6-speed manual into the next gear a hair before 6,800 rpm. Shifting the 6-speed manual, the only transmission available for the RS (thank you FORD!), is a thoughtless effort where the cogs seemed to pull you into each gear with somewhat of an assured landing after release of the perfectly-weighted clutch. 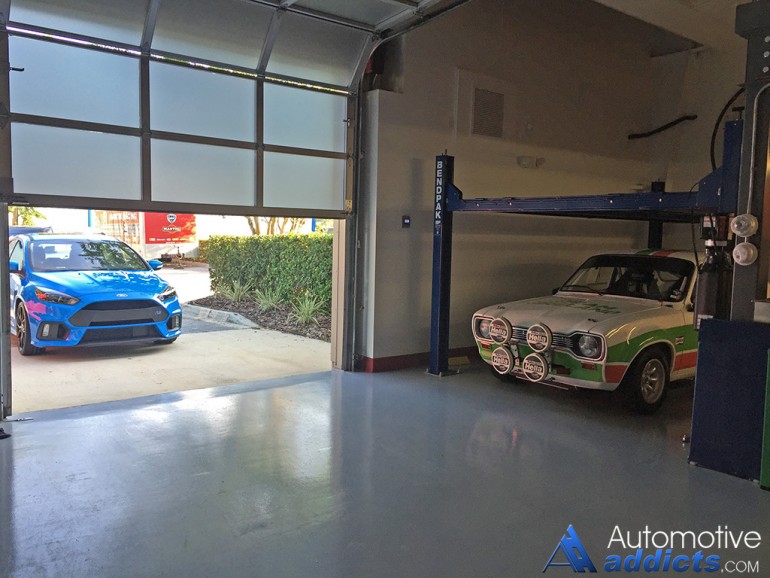 Now, the faults with the new Ford Focus RS are probably moot to those who have their salivating glands set on tasting and digesting one of the best hatchbacks on the current market starting with a $36K check. To me, the Focus RS could use a bit more power (it didn’t ‘feel’ like 350HP). Though, with its current “force” there is a safe and expected trait about what you can and cannot do with the RS when carving canyon roads or hooning on a track day. At such a level of power output, the Focus RS isn’t trying to outdrive itself or you as the driver. It isn’t trying to be its brutish GT350 brother in a straight line. Reaching 60 mph in the claimed 4.7 seconds is probably doable but looks to require some over-time effort on the driver’s part. Having said that, the Focus RS is nicely balanced and poised for drivers of most skill levels but could be a masterful adventure for the experienced on a track with several technical turns and elevation changes. Is it good? Yes. Is it great? Sure, for those who dare to put in the effort to learn the Focus RS and drive it like you stole it. The Focus RS doesn’t live up to the new-age return of the RS500 on this side of the pond until you punish it – then, ear-to-ear grins ensue and the rooted passion of the RS comes alive. To me, in many ways, after the smell of the hot Brembo 4-piston calipers biting down on 13.78-inch disk brakes up front and exhaust mixed with a sound of the clattering turbo wastegate to titillate my senses, the Focus RS is all of what the RS500 inspired to be and much more. Now, we (in the USA) can have our cake and eat it too. Go get one, you’ll thank me later.

>> Get the best price on the Ford Focus RS from a network of local dealers now. <<