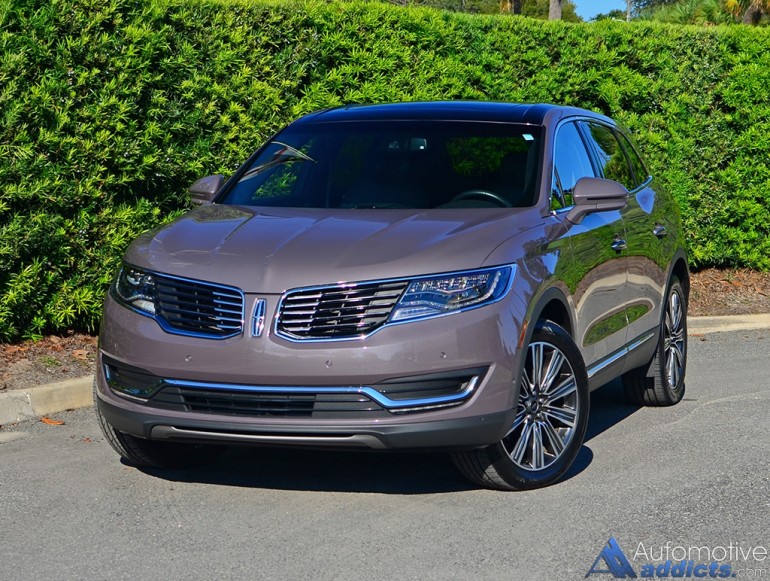 Lincoln, or what is touted as The Lincoln Motor Company through many modernized marketing campaigns, has set out on a course to appeal to luxury-seekers of all ages. Riding on the now-thriving crossover segment sales, the newly-redesigned Lincoln MKX gets the brands full-on luxury treatment by way of an optional exclusive Black Label trim.

The Lincoln MKX has always been a respected midsize crossover but never really captivated the masses like some of its vanilla competition that sometimes use flaring sport trims and packages to garner the attention of those outside of mundane spectrum. The newly designed Lincoln MKX, even with the latest Black Label signification, has its work cut out to appeal to a larger demographic.

>> Get the best price on the Lincoln MKX from a network of local dealers now. << 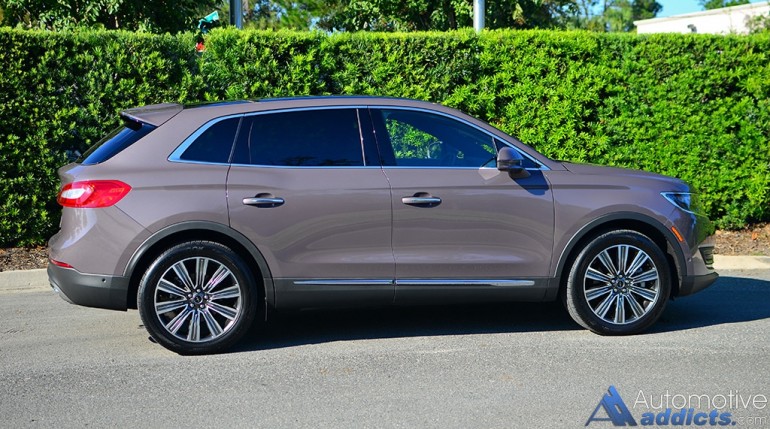 The 2016 Lincoln MKX is fully redesigned for the model year bringing a fresh styling and captivating aesthetic to its overall visual presence if I may say so myself. A forward-thinking formula has been used throughout the new MKX to make wiser use of its slightly larger dimensions over previous years. Additionally, there is a new turbocharged engine option and adaptive suspension dampers equipped on all-wheel-drive models combining a decent ride quality that adapts well to the challenges of imperfectly paved roads. 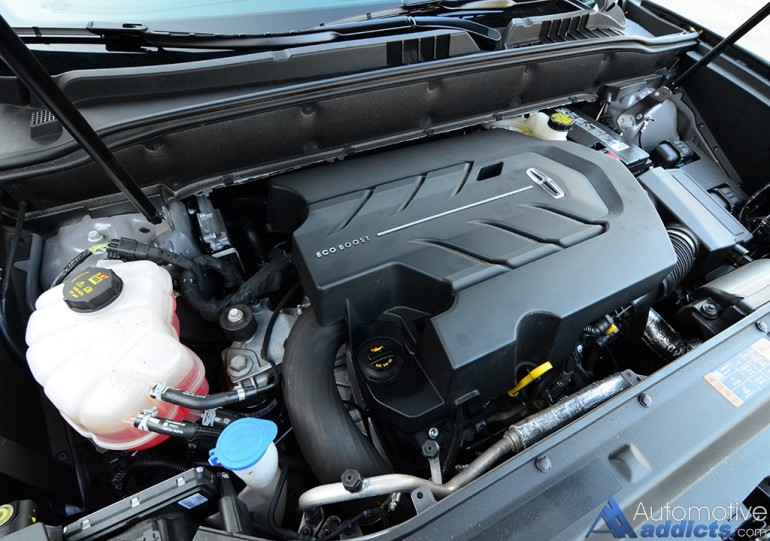 After spending a week in the new 2016 Lincoln MKX Black Label, its new 2.7-liter turbocharged (EcoBoost) V6 engine is perceived as the desirable powerplant for such a vehicle. The optional EcoBoost 2.7-liter twin-turbo V6 engine is quite powerful with 335 horsepower at 5,500 rpm and 380 lb-ft of torque peaking at 3,000 rpm. With all-wheel-drive, the 2.7-liter turbocharged V6 gets the MKX up to 60 in just 6.2 seconds, which is noticeably quicker than the now-standard 3.7-liter V6 engine variant. Probably the only hindrance of the turbo V6 is it being mated to a 6-speed automatic transmission, an area where a new 8-speed may have assisted in the performance and efficiency area combined with the advanced all-wheel-drive system of my fully-loaded MKX Black Label test vehicle. Nevertheless, overall performance was respectable, and the MKX handled its own without much fuss or sloppiness through sharp turns at speed, braking, and acceleration from a standstill or thrusting pass traffic on the Interstate. 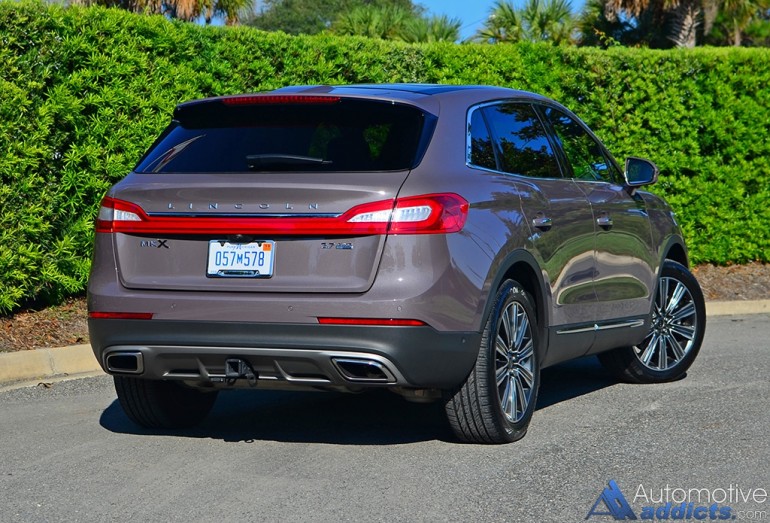 The low-end to mid-throttle power is excellent, and the ample torque carries over 4,300 pounds well. The MKX exhibits a bit of expected understeer upon abrupt turns with slight throttle cuts from the stability and traction control system but carries through surprisingly good. While the efficiency of the new 2.7-liter V6 EcoBoost engine doesn’t improve over comparably configured all-wheel-drive 3.7-liter V6 MKX, it there is a much more noticeable amount of power throughout the rev range, mostly in the mid-throttle area due to the 380 ft-lbs of torque reaching its peak not until 3,000 rpm. The short bit of noticeable turbo lag doesn’t appear to be intrusive enough to hinder overall acceleration out of the hole.

I saw a steady 23.8 mpg on the highway driving the new MKX 2.7 AWD Black Label. At times it would hover around 25 mpg but later drop just below its EPA-estimated 24 mpg figure after a 50-mile stint with the adaptive cruise control set at 77 mph. City mileage was slightly better than the EPA-estimated 17 mpg with me getting about 19.4 on average during repetitive stop-and-go traffic for an 8-mile backed-up-highway journey. The new 2016 MKX 2.7 AWD gets a combined EPA-estimated 19 mpg. 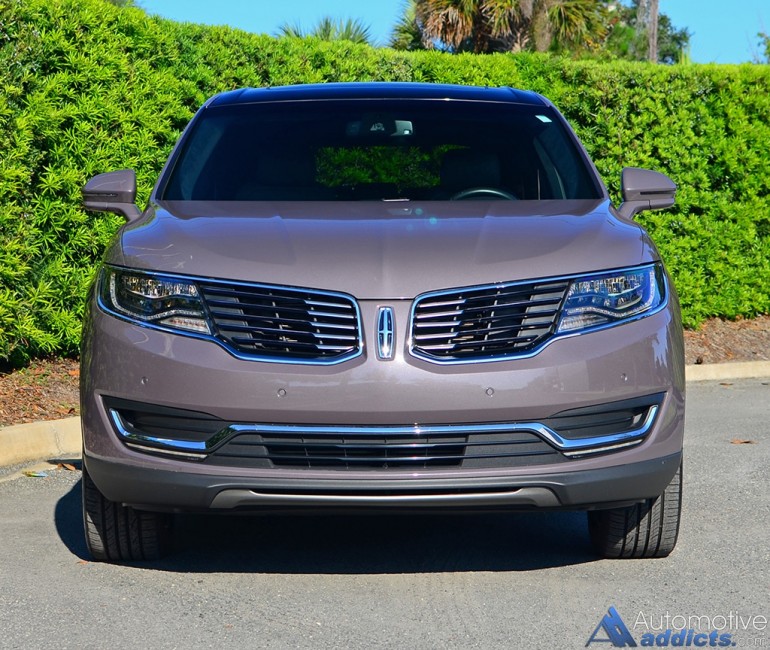 The exterior design of the new MKX freshens up and picks up where the last generation left off to give it much more exclusive and luxurious appeal that somewhat stands out in the large crowd of crossovers. The chic exterior colors of the MKX Black Label only add to its exclusivity with my test vehicle sporting an intriguing Chroma Quartz Silver Metallic exterior paint, which has an earthy purple tent that is pleasing to the eyes. The polished 20-inch wheels, darkened panoramic roof, and new exterior LED lighting completes the exterior’s luxury theme. I totally dig the whole get-up and the interior’s subtle contrasting stitching to match the exterior’s body color. Those are the little cues and touches that will pivot Lincoln far into its proper place in the modern-day Luxury automotive world, right where they belong. 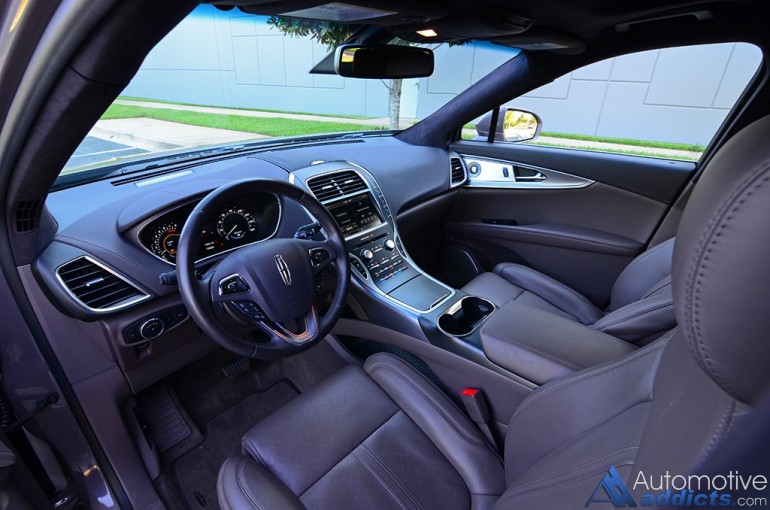 The cabin of the new 2016 Lincoln MKX Black Label is plush and encased in several leather wrapped soft touch surfaces. The monotone theme of my test vehicle does a good job to mask some of the hard surfaces, which are surprisingly found in odd places for a midsized luxury vehicle, such as the lower door trim and dashboard vent surroundings. Dull-looking plastics surround the center stack encasing the latest iteration of the Lincoln MyTouch infotainment system. Early production 2016 Lincoln MKX vehicles missed out on the newer and highly praised Sync 3 system and have to make do with the outgoing MyLincoln Touch interface. The infotainment system remains to be somewhat of a hard pill to digest when it comes to its smallish on-screen buttons that add a level of unnecessary frustration when you’re attempting to pay attention to the road. Though, using the physical buttons that control the audio and climate control system are always a welcomed change for Lincoln in place of older touch-capacitive buttons on the previous generations. Moreover, the gear selector push-buttons on the upper dashboard are another acquired taste item on the MKX that some may find to be out of place while others may enjoy their newfound simplicity and space-saving concept. One good thing I will say about the push-button shifter is that park is automatically enabled upon shutting down the vehicle if you ever forget to push the Park button. Such a simple feature is something Ford and Lincoln have implemented for many years to avoid any dangerous situations of a rolling vehicle. 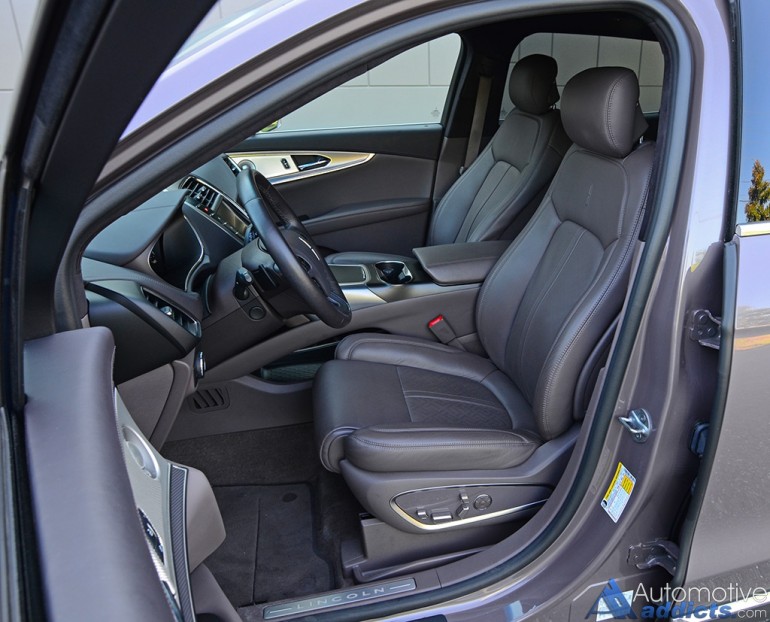 The seating positions and comfort of the seats are some of the best parts of the cabin, in addition to my MKX Black Label’s Alcantara headliner and remarkably bright automatic LED headlights and massaging and climate-controlled 22-way-adjustable front seats. Cargo dimensions are generous at just over 37 cubic feet of space behind the rear seats while they are in place. Fold down the 60/40-split rear seatbacks and the cargo space opens up to 68.8 cubic feet, which is a respectable figure for the midsize crossover segment. 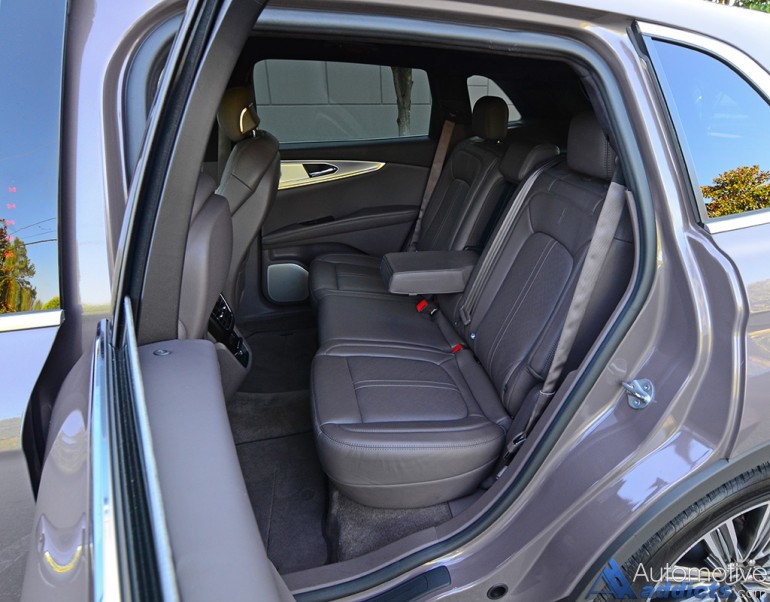 Lincoln’s forward thinking and exclusive design and trim-off-sets in the Black Label edition vehicles are slowing starting to pay their dividends. Though, the slow progress of the Lincoln Motor Company, as they say, is just that – a methodical process to captivate a larger audience. Can they do it? Sure, the new MKX Black Label is a good step in the right direction to set itself far apart from any of its Ford counterparts and anything else on the road that carries a mundane vanilla look with a luxury badge. Lincoln is getting there, and a starting price of $38,260 before any fees or options makes it an attractive offering for a midsize luxury crossover. Though, my loaded-up MKX 2.7 EcoBoost AWD Black Label test vehicle may be a bit to digest at an as-tested price of $67,020 including a $925 destination and delivery charge. Nevertheless, my assessment of the MKX Black Label is definitively luxurious, and at such a price luxury-seekers shouldn’t have many qualms with its extensive list of convenience features, luxury amenities, and active safety features.

>> Get the best price on the Lincoln MKX from a network of local dealers now. << 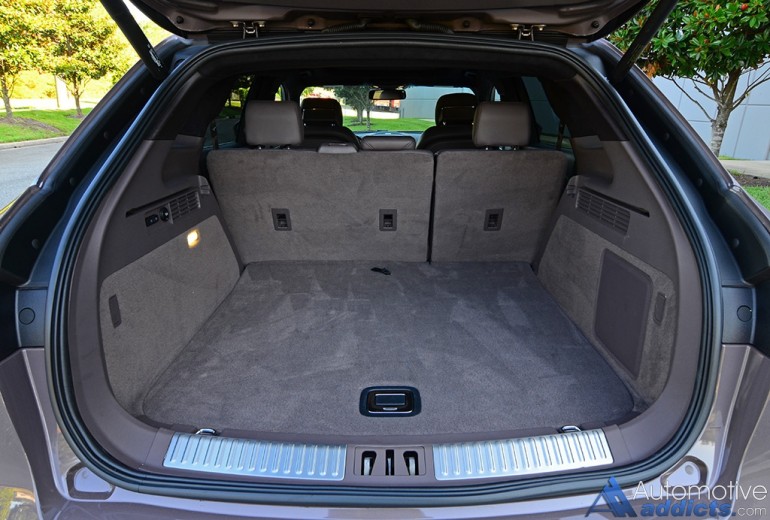