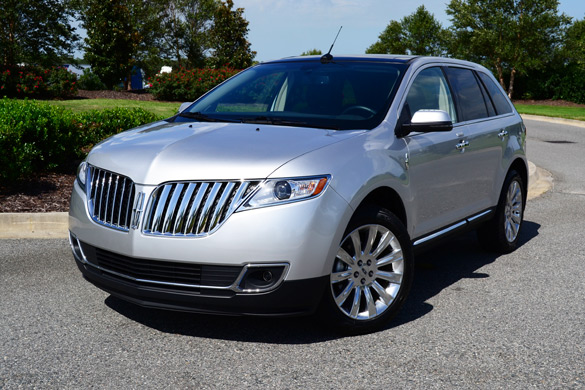 Over the past few years, Lincoln has made a valid effort to redefine their stance in the luxury segment. The new 2013 Lincoln MKX is a step in the right direction when it comes to luxury crossover vehicles combining luxury refinement and performance. With the styling of the new 2013 MKX remaining the same since its redesign in 2011, it continues to embark on a steady path Lincoln has paved for potential consumers of 5-passenger luxury crossover vehicles.

The new 2013 Lincoln MKX receives an updated version of the MyLincoln touch interface attempting to add ease of usability and interaction when it comes to infotainment and climate controls. The new 2013 Lincoln MKX, a polished derivative from its Ford Edge sibling, provides a supple ride, quite cabin and plenty of passenger space. 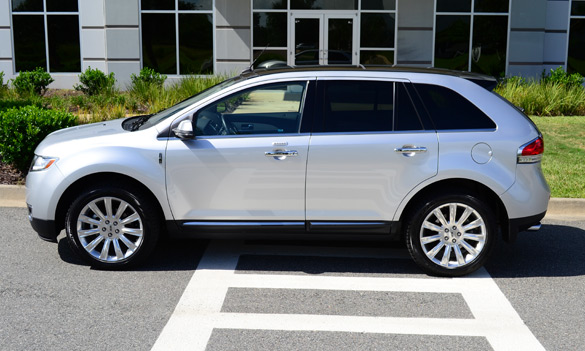 The new 2013 MKX is powered by a carried over Ford Mustang-sourced 3.7-liter V6 engine producing 305 horsepower and 280 pound-feet of torque. My MKX test vehicle is front-wheel-drive while an advanced all-wheel-drive option can be had for an additional $1,850. A smooth-shifting 6-speed automatic transmission with standard paddle shifters performs shifts quite well without too much hunting. Although, cruising near highway speeds the transmission does tend to hold onto the higher gear forcing you to push the pedal rather far before it decides to downshift. 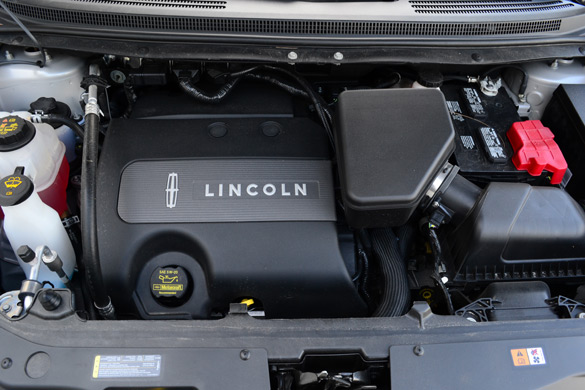 Performance is what you would expect from a luxury crossover. The Pirelli tires wrapping 20-inch chrome-clad aluminum wheels give the MKX a steady yet smooth ride. The new 2013 Lincoln MKX’s road mannerism gives you confidence in the driver’s seat under most conditions. Though, under hard acceleration the front end is at the mercy of traction and stability control as the front wheels easily break loose. Most of this attribute is due to the 280 pounds-feet of torque sent to just the front two wheels. The MKX all-wheel-drive model, adding some unwanted heft to an already beefy vehicle, will solve much of this issue by redirecting as much as 50% of the power to the rear wheels at a relatively low 4000 rpm. 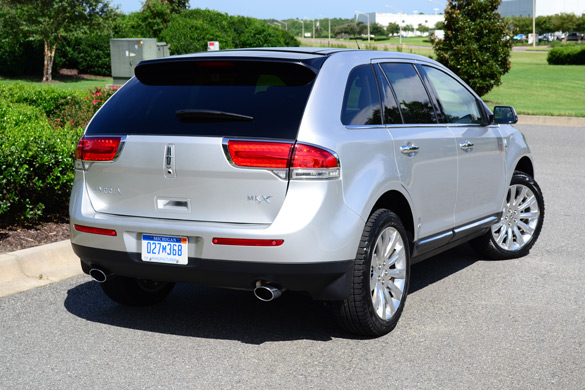 Steering feel is decently weighted at all speeds. At highway speed the MKX’s cabin remains quite and the suspension keeps things level soaking up most small road imperfections. Over-all handling is assuring but tends to understeer excessively as you would expect pushing the front-wheel-drive 4,236 pound crossover too hard into turns. Braking could be a bit better as a stop from 60 mph takes about 133 feet.

The new 2013 Lincoln MKX’s turn signal switch has been updated to operate without any locking positions using an electronic system similar to BMW. Although updated, the switch is physically stiff mistakenly causing activation of the high-beam headlights or flashers. 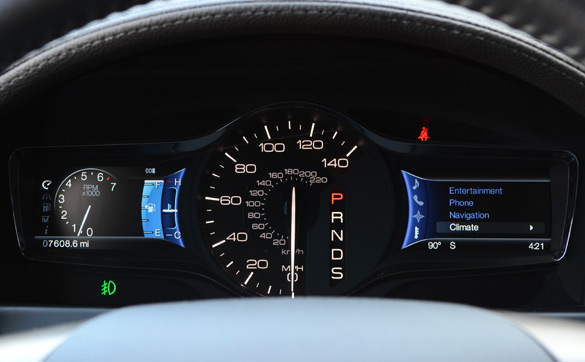 Fuel consumption is a bit lagging for the new MKX when pitted against other 5-passenger crossover offerings. I was able to get an average 21 mpg during my combined city and highway driving. EPA estimates for the new 2013 Lincoln MKX are 19 mph city and 26 mpg highway. 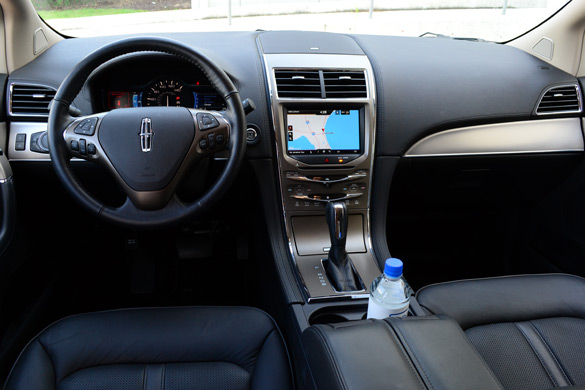 The new MyLincoln touch interface is a nice element for any luxury vehicle. Lincoln manages to combine Ford’s SYNC and Bluetooth connectivity into a touch-sensitive button layout down the center dashboard. Combined with a big LCD touch-screen and a pair of small color LCD screens surrounding the speedometer, it makes the case for an interactive and ‘in-touch’ experience for the driver. The abundance of buttons found in other vehicles with similar feature-sets is made simple with the touch-capacitive controls on the MyLincoln interface. While the system seems to be improved over last year’s iteration, it still remains to have a couple qualms such as the system’s tendancy to be slow to respond to some LCD touch-screen functions. Additionally, the size of some on-screen buttons are not friendly for those with sausage fingers. Sometimes it makes the correct button selection a second-guessing task. In total, MyLincoln touch isn’t worse than any other luxury vehicle’s infotainment control system. It just uses less physical buttons in place of a clean stack of touch buttons. 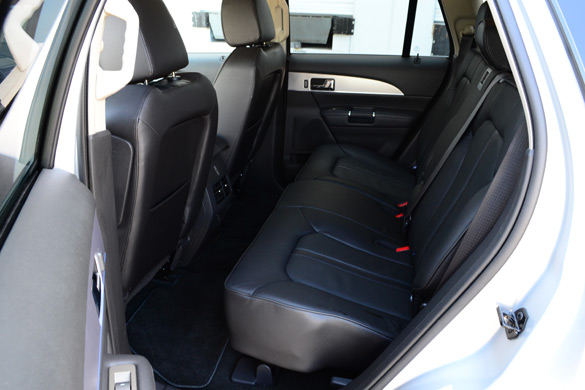 Seating areas are spacious and comfy. The power front seats of my loaded-up 2013 MKX featured heating and ventilation with driver memory functions. The heated and power tilt-telescoping steering wheel was mounted a bit too high for my taste, but your seating position can easily be compensated by the 10-way power seat. Rear seating room is spuriously spacious and the rear outboard seats are heated with the optional equipment group package found on my test vehicle.  The 60/40 split folding rear seat-backs fold down to give you a sufficient 69 cubic feet of storage. With the seats upright you have a respectable 32 cubic feet to work with for your cargo. 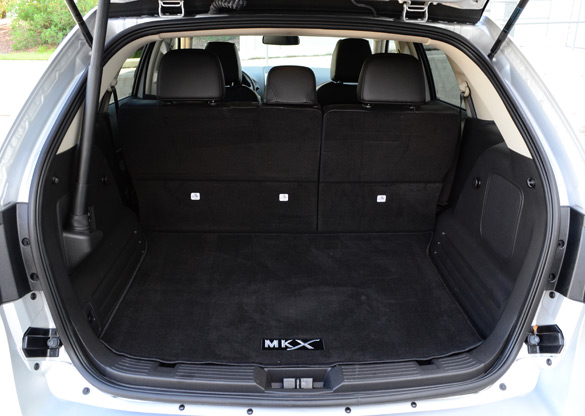 The new 2013 Lincoln MKX comes well furnished with a barrage of standard features. Items such as keyless entry with an updated touch-to-lock or unlock handle and pushbutton start with MyKey are standard features for the MKX, as well as a power rear liftgate. My loaded up 2013 MKX was optioned out with the top-level equipment group adding amenities such as a voice-activated navigation system, a 14 speaker 650 watt THX II Certified Audio System, Panoramic Vista Roof,  rear backup-up camera, and Blind Spot Information System with Cross-Traffic Alert.