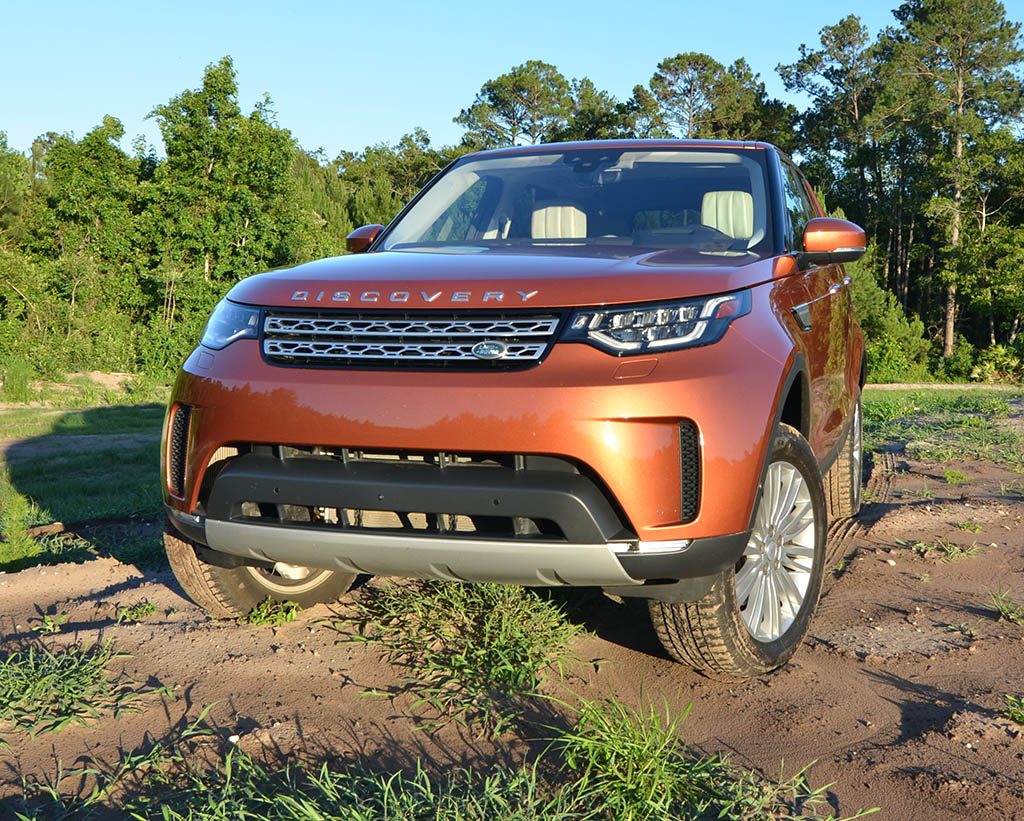 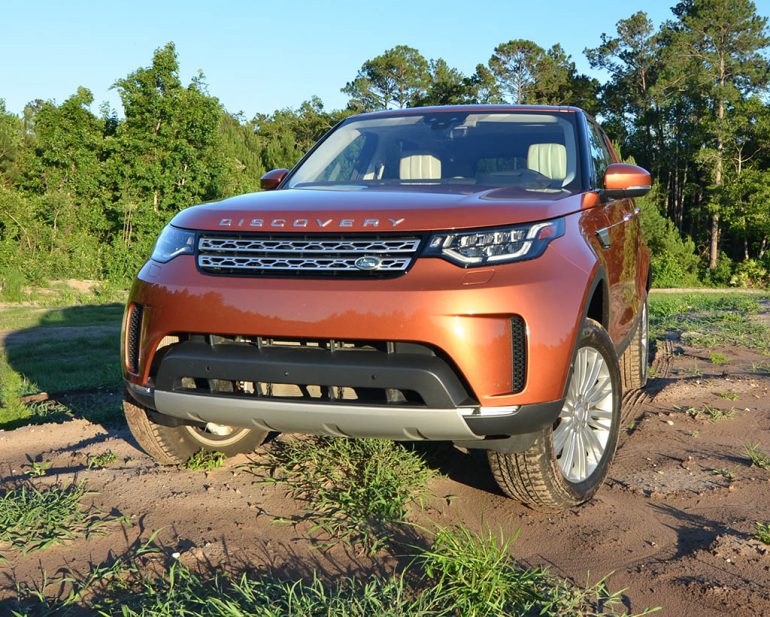 Within the spectrum of what Land Rover has to offer in some of the most capable luxury utility vehicles on the road today, the Discovery has evolved to enhance its foundational principles with clever ingenuity improving just about every part of what was once called the LR3 and LR4. 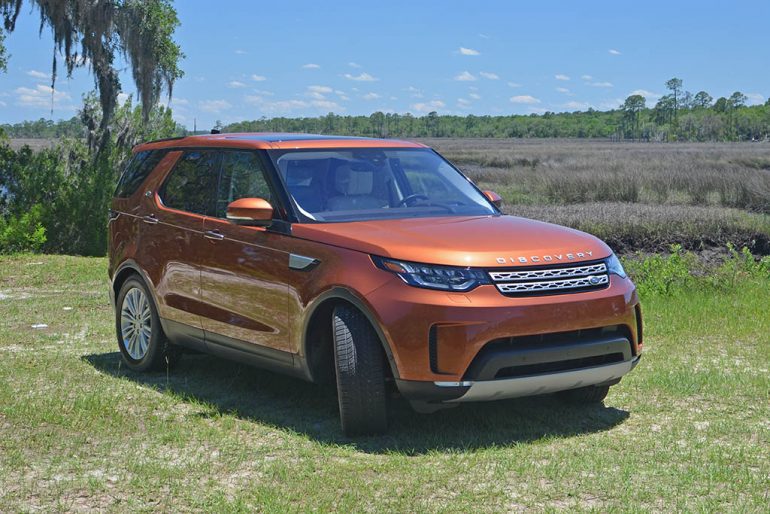 For the 2017 model year, the new Land Rover Discovery makes a comeback with its nameplate completely redesigning the outgoing model which was known as the LR4. In bringing back the Discovery name, Land Rover hopes to capture a historical recognition of a capable utility vehicle but with a more versatile demeanor to fit the needs of today’s road-going families without sacrificing the advancements for its true off-road capability.

The new 2017 Land Rover Discovery, in its three-row seating glory, is completely redesigned to shed an astonishing 1,000 pounds over its predecessor. In that, the new design embodies a much more rounded look that exudes smooth driving characteristics, a plush cabin laced with premium materials, and advanced technology that boldly advances the overall capability, safety, and adaptability of the Discovery. 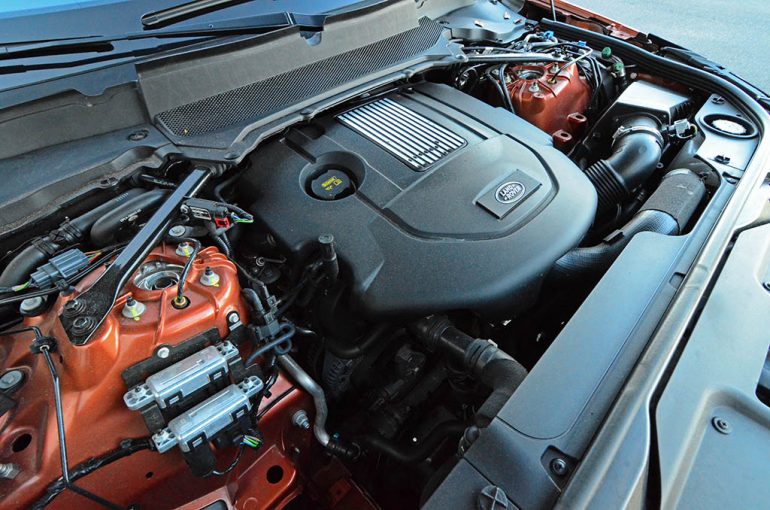 Land Rover offers a total of four trim levels initially, which includes a First Edition version that loads up just about every option that is available for the Discovery. Powering the new Discovery is Land Rover’s proven drivetrains starting with the brand’s 3.0-liter Supercharged V6 engine that produces a healthy 340 horsepower and 332 ft-lbs of torque. My Td6 trimmed test vehicle, taking use of a torque-inspired powertrain, gets a 3.0-liter Turbodiesel V6 that pumps 254 horsepower and a substantial 443 ft-lbs of torque. Both engine choices get mated to an 8-speed automatic transmission. 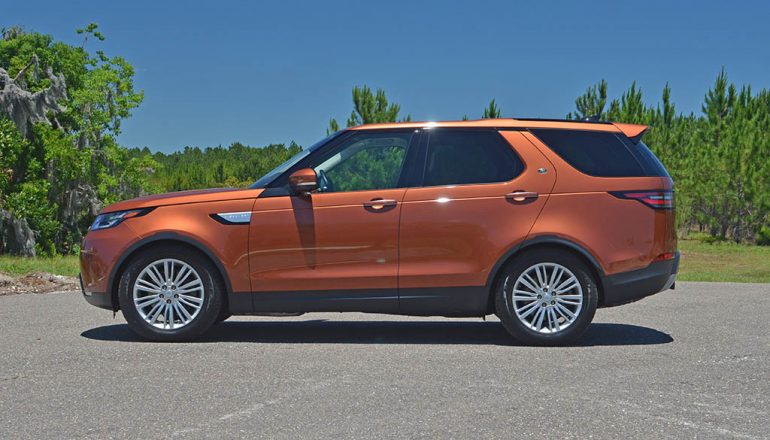 In my assessment of how the new 2017 Discovery drives in its diesel-powered top-trimmed HSE Luxury form, it gives you an assured thrust through the mid-range but somewhat falters for quickly shifting into the right gear to take proper use of the ample torque. In a way, the 8-speed automatic transmission, even though it’s very direct in its connection to all four wheels, is slow to shift at times and can have an unwanted delay to find first gear upon getting out of the hole. Fundamentally, the default second-gear starts do not do the Discovery any justice as far as balancing efficiency and performance. I would rather the transmission always start in first gear, as it does when the motorized-rising turn-knob shifter is put into its Sport mode. 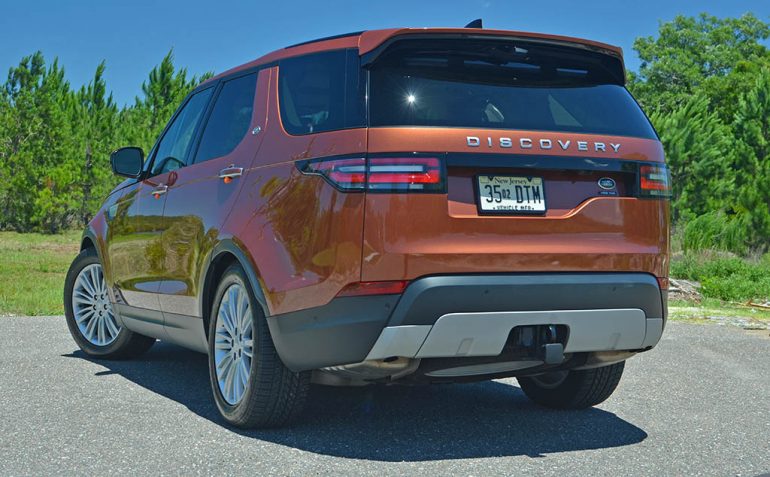 On the road, the Discovery is well behaved with an initial assurance to the driver. Though, when pushed into turns or abrupt lateral movements are made, there is a quick discernment that arises as the Disco feels top heavy and tends to have a bit more body roll than most would desire. Still, for the most part, the exceptionally smooth ride quality from the air suspension and nicely tuned dampers made up for the uneasiness of putting the Discovery into sharp bends. 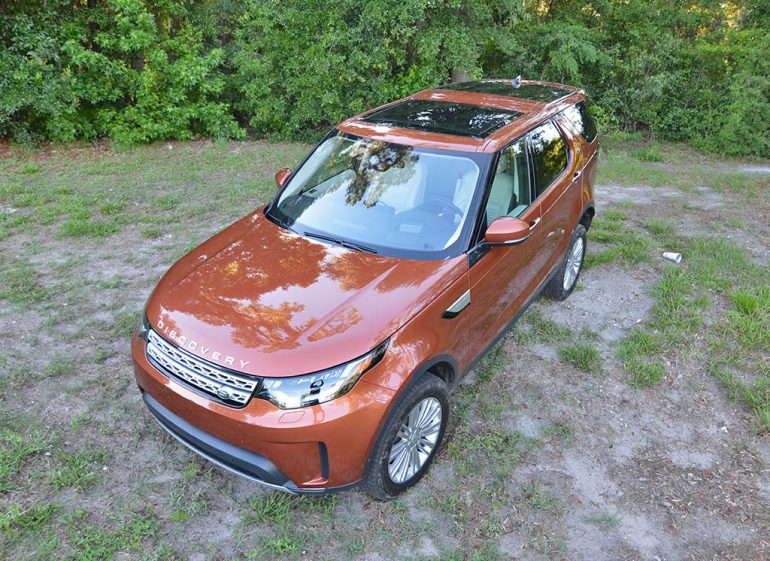 The exceptional ride quality was only one part of the equation that made the Discovery a joy to pilot as it felt as if you were driving a much smaller vehicle. The air suspension system touts the ability to raise and lower the vehicle depending on your driving or parking situation. The Discovery has a remarkable water wading depth of 35.4 inches with the air suspension it its highest mode. There is also another side of the air suspension system that automatically lowers the vehicle by 1.6 inches to allow easy exit and entry. The highly praised Terrain Response 2 system can automatically change drive modes for different conditions monitoring the terrain every 100 milliseconds to adjust steering response, throttle, and traction and stability control. Even with the beefy 20-inch all-season Goodyear Eagle tires that are more suited for the road, the Discovery can manage to go through many obstacles you would never dream of doing in a “normal” SUV without the advanced Terrain Response 2 system assisting you along the way. I found that plowing through muddy surfaces and slippery mounds is a simple task for the Discovery while its torquey diesel engine helped greatly to handle such surfaces. 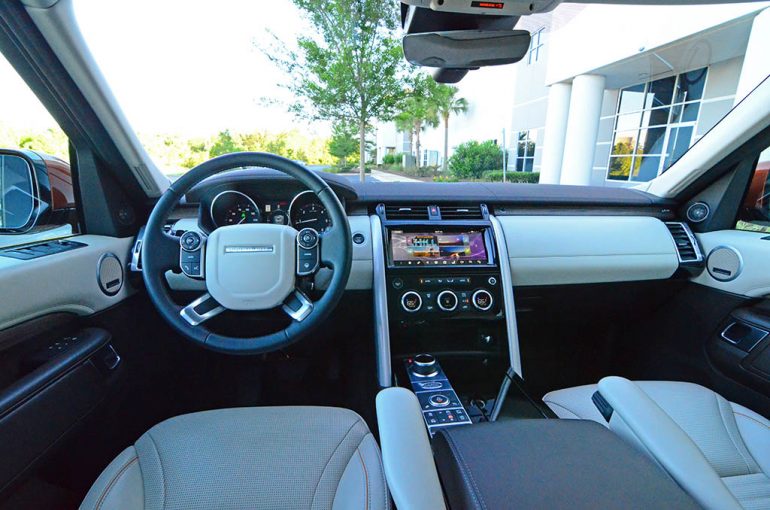 When it came to offering a diesel powertrain, the Discovery benefits mostly from decent fuel consumption numbers apart from the ample torque that the turbodiesel V6 engine produces. Though, I feel that that diesel engine doesn’t offer much more over the standard Supercharged V6 petrol engine. I took particular notice to the decent fuel economy of the diesel that remained mostly consistent the whole week of driving the new Discovery. I came away with an overall average of 23.6 mpg with most of my driving around town on local back roads with limited highway access. The EPA consumption figures come in for the Discovery Diesel Td6 HSE Luxury at 21 mpg city, 26 mpg highway, and 23 mpg combined. Drawing a significant contrast, the gas-powered Discovery gets 16 mpg city, 21 mpg highway, and 18 mpg combined. 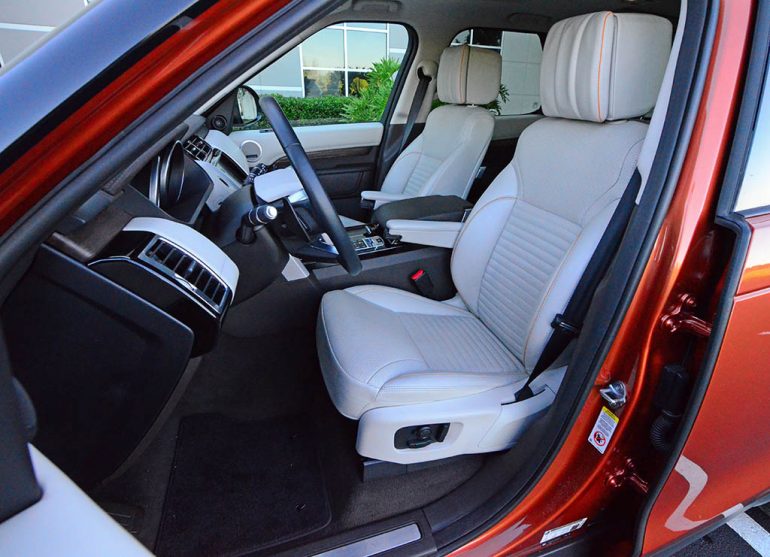 Positioned just below its Range Rover sibling, the Discovery embodies a large cabin that it provides just enough space to make it an attractive selection for a three-row crossover utility vehicle. Departing from the old LR4’s body-on-frame architecture, the new Discovery makes better use of its interior space balancing the plushness of a leather-wrapped cabin and an environment that is conducive for those who want to experience the ruggedness that the Disco offers. With that, there are several cubbies for storage throughout, including up to 82.7 cubic feet of storage out back with all seats folded. Speaking of seat folding, the Discovery offers a vast amount of seat configurations through the toggle of electronic switches, making the folding act of each second and third-row seat a simple press of a button. Additionally, access to the third row of seats is a simple act where the second-row seats can articulate forward just over 6 inches. Thanks to an added 1.5 inches of wheelbase over the LR4, the Discovery has ample leg room for all seats never compromising its definitive position as a three-row crossover. 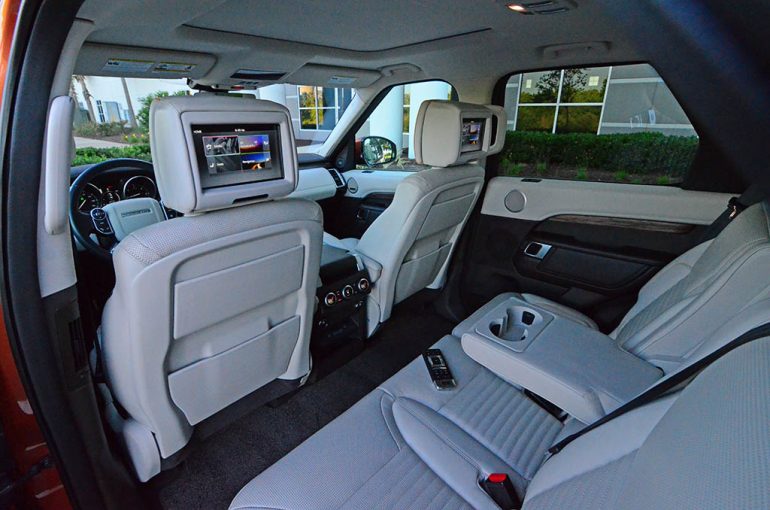 The lavish side of the interior starts with several leather wrapped surfaces throughout the dashboard of the top-trimmed HSE Td6 Discovery. The plush perforated leather seats with defined pipe-trim all collimate an inviting environment. The textured wood trim and aluminum trim pieces that run down the middle stack of dashboard instrumentation bring the contrasting lines of the Discovery’s interior together in a delicate act of providing luxury and a healthy taste of rugged off-roading character. 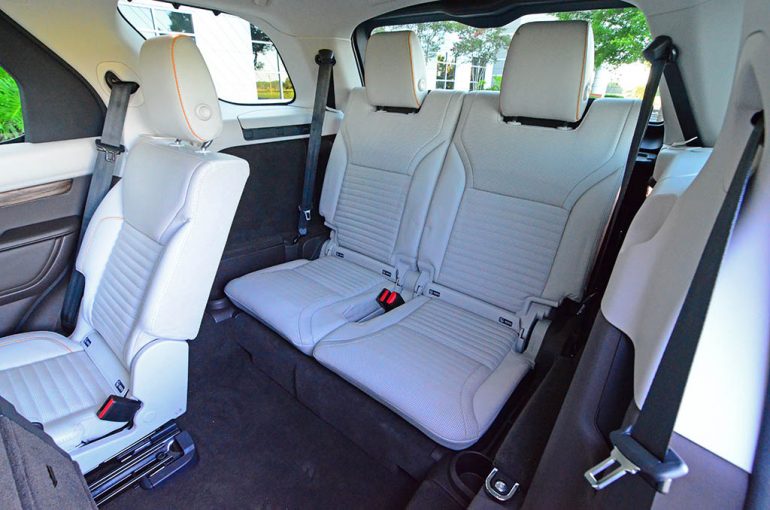 One of the more discerning parts of the new Discovery remains to be something that I have criticized in the past on Land Rover vehicles, and that is the infotainment system. Even though the latest iteration of Land Rover’s infotainment system, dubbed InControl, has been completely revamped with an upgraded 4-core processor, the system still lacks an expected level of intuitiveness. While the system is quick to respond to inputs, the press of on-screen buttons don’t always respond as they should and the system has a ridiculously long initial boot time. Moreover, I found issue with certain systems fully loading and at times failing, such as the 360-degree rearview camera system not loading or the audio system abruptly shutting off. I may give Land Rover a pass in this area as my test vehicle may require updates being a potential pre-production unit. 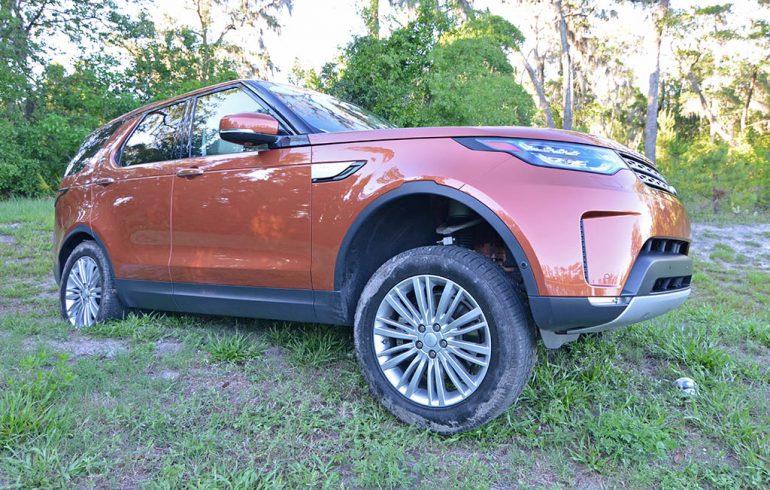 The 14-speaker Meridian premium sound system was up to the task of providing welcoming octaves throughout the cabin, as was the optional Drive Pro package to monitor blind sports, provide adaptive cruise control, alert me when there was crossing traffic as I was backing up, limit my speed, read traffic signs to relay the proper speed limit, and mitigate potential forward collisions while sounding and displaying an alert on the dashboard and heads-up display.

The styling of the new Land Rover Discovery departs far from the old boxy structure of the LR4. Though, there are still a few characteristics that Land Rover cleverly left in the Disco’s design, such as the off-centered license plate on the rear power liftgate. The set of LED headlights and exterior LED lighting proved to be welcomed on my long drives home through pitch-black back roads. The new style of the LED tail lights are also a welcomed fresh change to Land Rover, which appears to be catching onto other future models. In all, the style of the new Discovery is attractive and stately without departing from the expected traditionalism that you find in the exterior of every Land Rover vehicle. 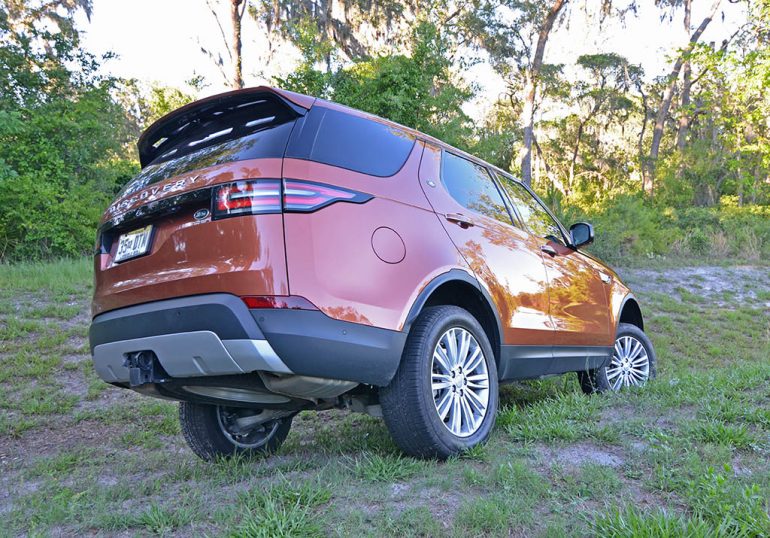 Balancing a capable off-road-going luxury SUV is no easy task. Somehow, Land Rover continues to pull off the nearly impossible, and the new Discovery is evident of nearly perfecting such a formula outside of its coveted Range Rover line to offer a more conservative approach to giving the masses a delicate balance of luxury and off-road prowess. Still, such a combination will come at a cost, one that has my loaded-up test vehicle landing at an admission price of $80,150, which includes just about every option for the Td6 Diesel HSE Luxury trim and a $995 destination and delivery charge. 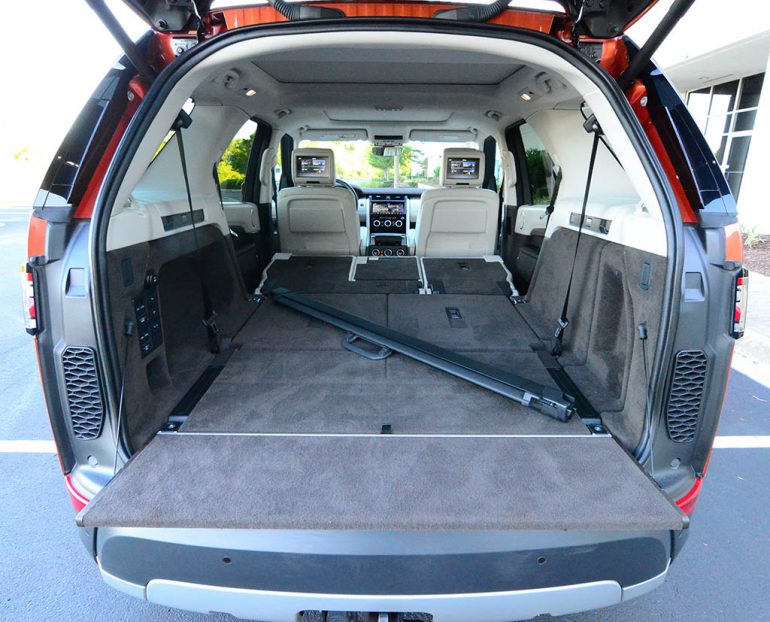