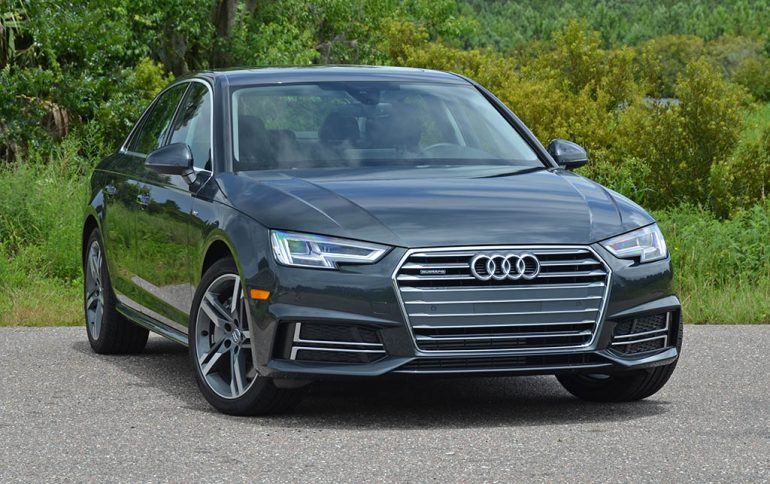 When I first embarked on a rather long drive in the updated Audi A4 for its 2017 model year, I was immediately impressed with the changes. Most of what the latest Audi A4 had become was welcomed – all without taking away from an already-great formula that has paid off well to compete with the linking’s of the BMW 3 Series, Mercedes-Benz C Class, and even the outgoing Cadillac ATS Sedan.

For the 2018 model year, following the 2017 redesign, the Audi A4’s trim levels get a slight working of included equipment to include a few more amenities, such as standard heated front seats and S line exterior enhancements for a sportier appeal. Moreover, the mid-range Premium Plus trim gets standard blind-spot monitors and rear cross-traffic alert. The top Prestige trim now gets additional active safety features, such as automatic highbeam headlights, traffic-sign recognition, adaptive cruise control, in addition to acoustic-glass front windows.

My nicely-equipped 2018 Audi A4 2.0T quattro S tronic test vehicle with the Premium Plus package comes to me in a nearly identical form of the 2017 model that I extensively tested when the redesigned A4 first hit the streets. 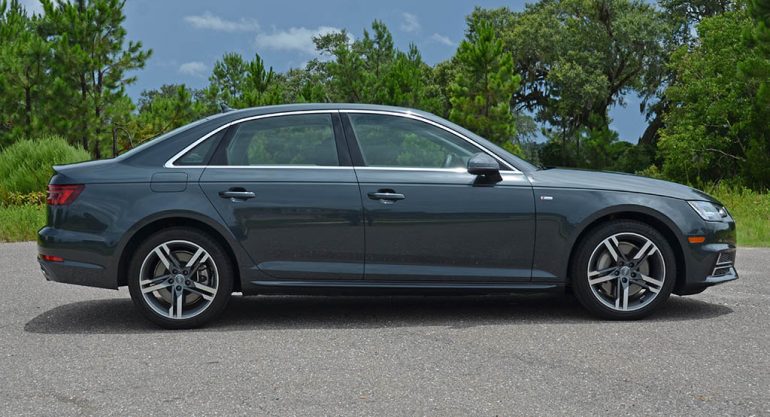 Reiterating much of what I found in the new Audi A4 is a well-rounded vehicle that hits well above its performance numbers would otherwise indicate. With such in mind, the 2.0-liter turbocharged 4-cylinder engine is a delightful powerplant that gets the job done and some when you least expect it. Coupled with the automated dual-clutch transmission, dubbed a 7-speed S tronic transmission, the Audi A4 is quite the spritely vehicle having 252 horsepower and 273 lb-ft of torque at its disposal. Quite frankly, the engine, transmission, and proven quattro all-wheel-drive system keep the compact luxury sedan composed and eager to run alongside entry-level sports sedans. In all, the performance of the new A4 2.0T quattro is inspiring and hardly ever disappoints, even for the light-hearted enthusiast. The only drawback, as I have stated in my previous A4 review, is the transmission’s initial slipping of the clutch under light acceleration or when accelerating off of an incline. Otherwise, the 7-speed unit pops off shifts perfectly adding to the overall forward momentum to score a 0-60 mph time of about 5.6 seconds. 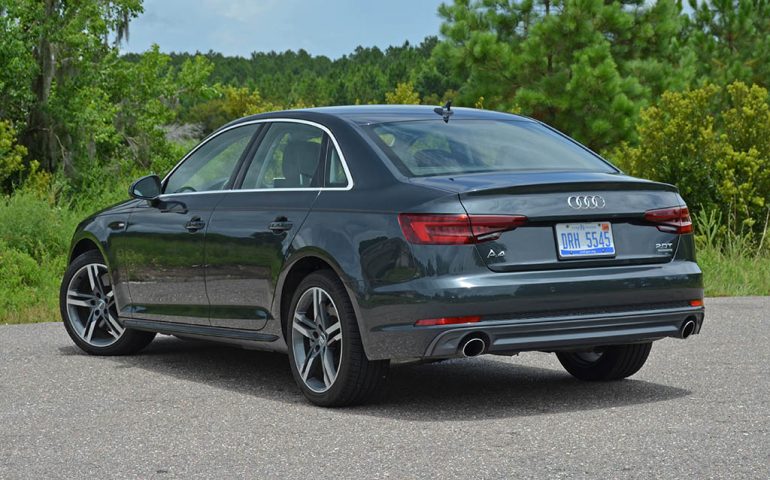 The new Audi A4 pulls off its respectable performance feats all the while keeping pace on the side of efficiency getting an easily-attainable 34 mpg on the highway. EPA estimats for the 2018 Audi A4 2.0T S tronic quattro come in at 24 mpg city, 34 mpg highway, and 27 mpg combined. 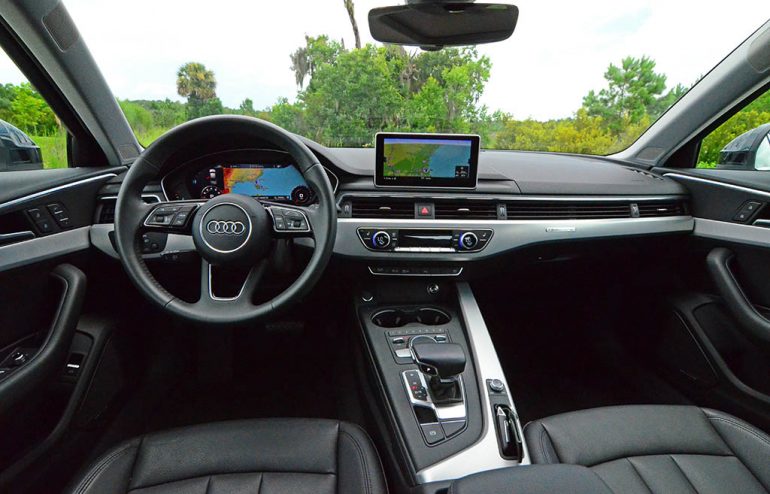 The interior of the Audi A4 nearly mimics its sharp exterior styling with excellent fit and finish with clever use of space and positioning of controls. The virtual cockpit/LCD screen gauge cluster instrumentation is among Audi’s best foot forward into the fray of using today’s advanced tech, which comes as part of the optional Navigation and Telematics package. Use of the virtual cluster becomes nearly second nature after a few days and many hours behind the wheel. Control of the latest Audi MMI infotainment system, which is fed through an 8.3-inch high-mounted LCD screen still requires some acclimation time for most but proves to be very responsive and straight-forward with its many menu sets, settings, and features. Additionally, there is Apple CarPlay built into the unit along with Android Auto, both utilized in conjunction with a USB-connected iPhone or Android smartphone. 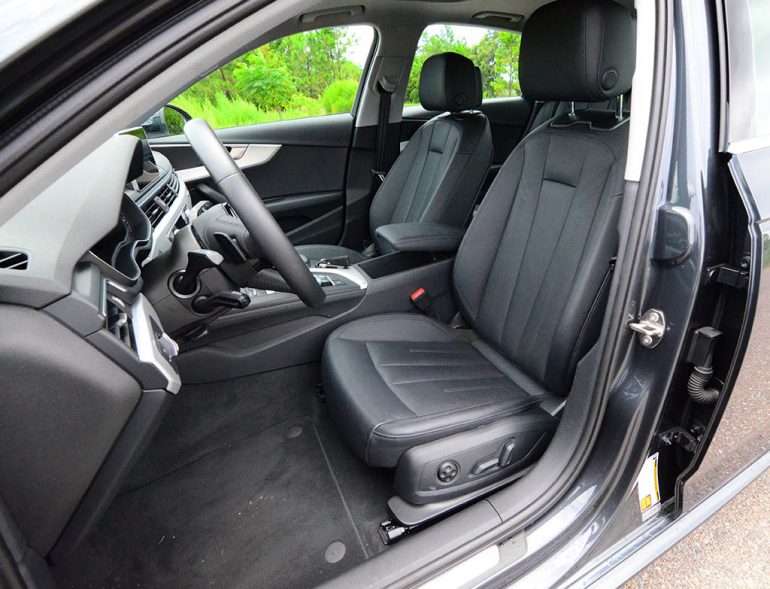 The comfort of the Audi A4 is exceptional for its size. Audi has long been a proponent for making clever use of its interior space, and the Audi A4 is no exception. The front seats, though they can be a bit coarse from the grade of leather used, prove to be supportive and aggregable on long trips. The rear seating is somewhat accommodating with just enough legroom for two adults – provided that the front seat occupants are not over 6 feet tall with the long legs to match. 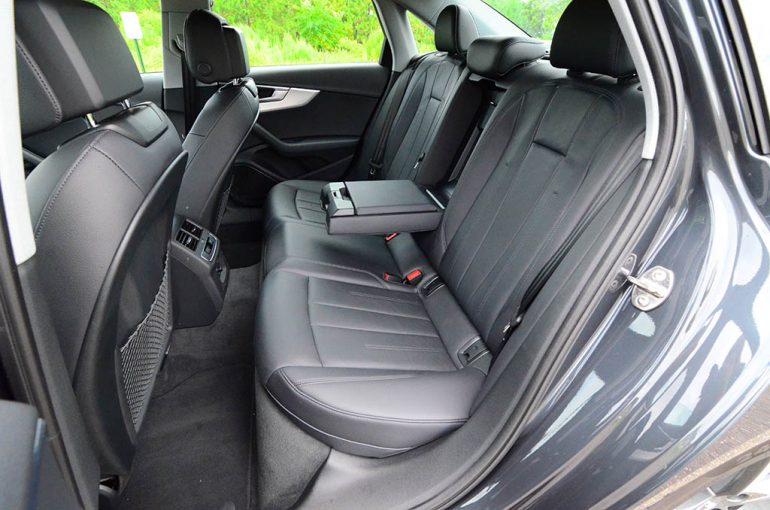 The new Audi A4 is undeniably one of the most well-rounded and versatile sedans you will find in its segment. There isn’t much to dislike about the A4 other than it’s styling doesn’t capture the deserving attention. Though, there is just enough to excite some in the drivetrain of the A4 and delightful turbocharged engine that feels much more powerful than it states on paper. With such a well-to-do package at its base level with front-wheel-drive, the Audi A4 starts at a price of just $36,000. Moving to the A4 quattro and adding on several desirable features and equipment, expect to pay my test vehicle’s price of $48,250, which includes two major equipment packages (Premium Plus and Nav-Telematics), and an upcharge for its Manhattan Gray metallic paint job. From there, the A4 goes up to just over $53,000.