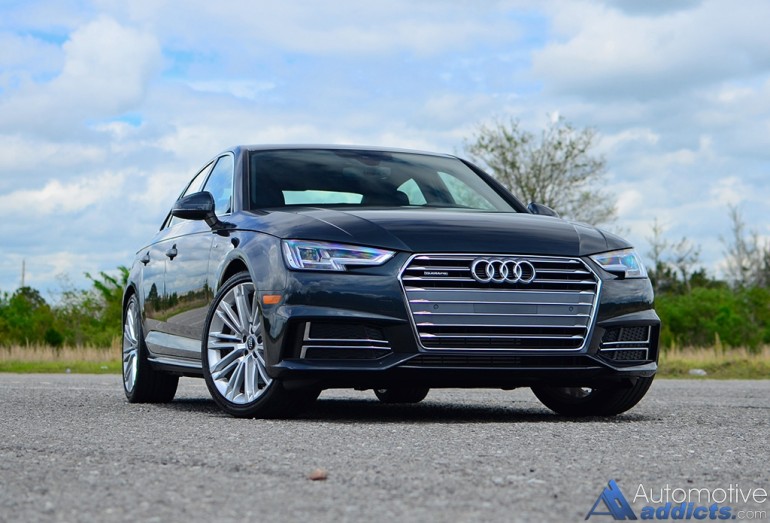 Undoubtedly, the Audi A4 has been the definitive staple for the brand just as the 3 Series has been one for BMW. In its ninth generation, the new 2017 Audi A4 is bigger with subtle exterior changes that are easy to miss but gets a reworked drivetrain that doesn’t disappoint ultimately redefining its place in its segment. 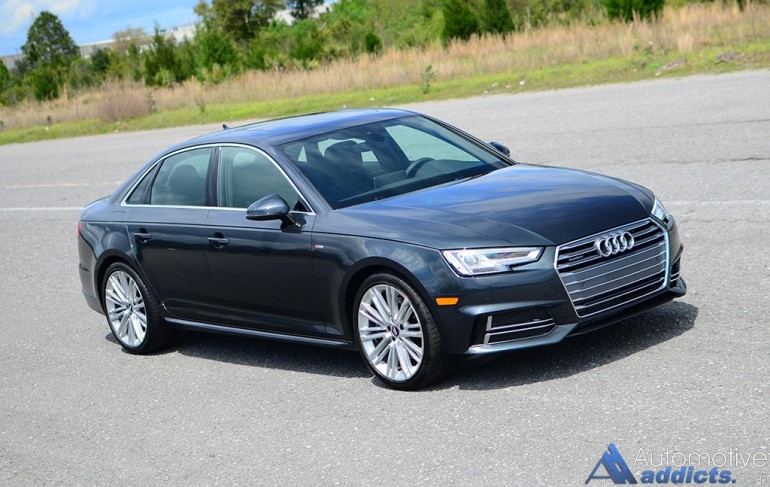 The latest Audi A4 redesign signifies what the brand has done so well, and that is create an attractive vehicle that stands out in the wide spectrum of the compact to midsized luxury sedan segment. It’s a simple task of recognizing what’s good about the outgoing A4 and carrying it into the mold of what’s new and better but utilize the best of today’s automotive technology. 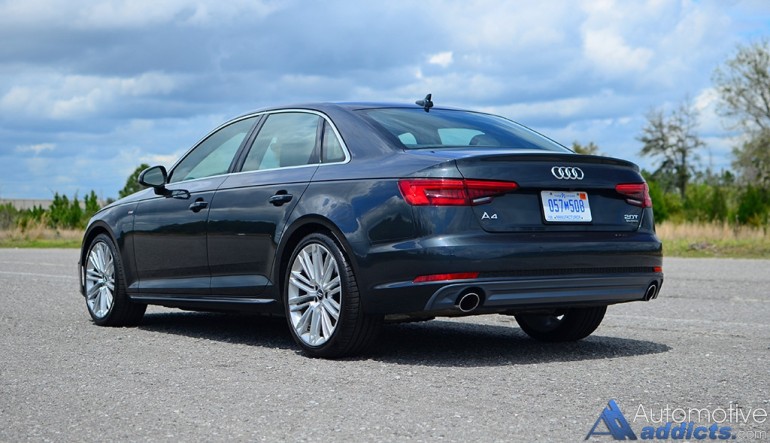 The new 2017 Audi A4, despite its similar looks to its predecessor, is still a new creature through and through. The new 2017 A4 is bigger than ever riding on a slightly longer chassis for a spacious cabin but retains its nimble stature with even less weight to tote around.

The toting duties are left to a reworked 2.0-liter turbo 4-cylinder engine that makes well do with more, to the tune of 252 horsepower and 273 lb-ft of torque. The new engine is mated to a 7-speed dual-clutch automatic transmission, the familiar DSG S tronic box that continues to prove it is one of the best in the business of automatic twin-clutch units. The direct shifts take place in milliseconds mustering all that the efficient yet powerful 2-liter turbo-4-cylinder has to offer to all four wheels in my Quattro-equipped test vehicle. The only discernment was the slight lags when the system slips the clutch during gradual acceleration from a stop or rolling starts. The new 7-speed dual-clutch transmission’s use of 7th gear returns an extremely low cruising engine speed; at 70mph it hovers around 1,500 rpm.  Because of this, the transmission is constantly downshifting into 6th or even 5th gear to generate a bit more engine speed to spool up the turbo just to climb a couple miles per hour. I found this to be one of the few inconsistencies of the drivetrain next to the clutch slipping during initial acceleration. Otherwise, the latest 7-speed S tronic transmission behaves as you would want it with the ability to manually make shifts via steering wheel-mounted shift paddles or use of the floor shifter booted to the right for up-down gear selections. 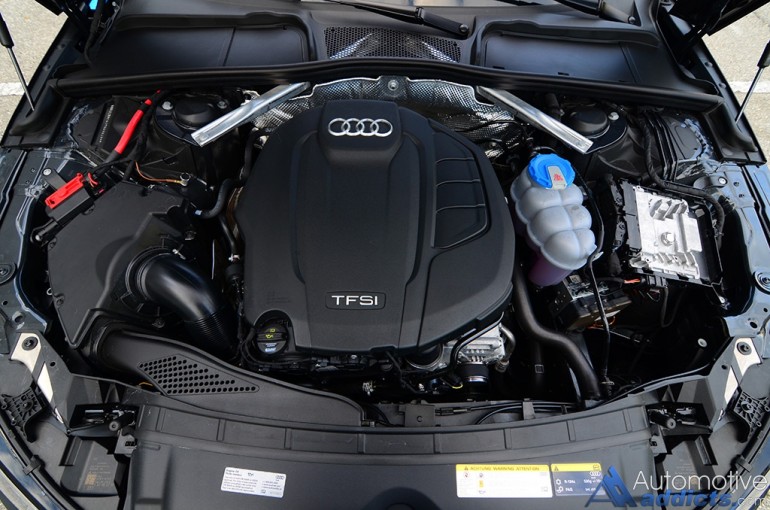 Fuel efficiency is not bad considering the power output of the new A4. I saw consistent numbers, averaging about 29 mpg in mix driving. However, I saw steady highway numbers as good as 33.2 mpg and 25 mpg around town. The EPA estimates, I think, are on the conservative side at 24 mpg city, 31 mpg highway, and 27 mpg combined. While I tend to drive at the speed of flowing traffic on the Interstate, the 33.2 mpg number was one that held steady for a couple of hundred miles. Even so, the flowing traffic speed was one that gave me concern when passing by state troopers due to the MPH number displayed on the digital and analog virtual cockpit screen of my A4. 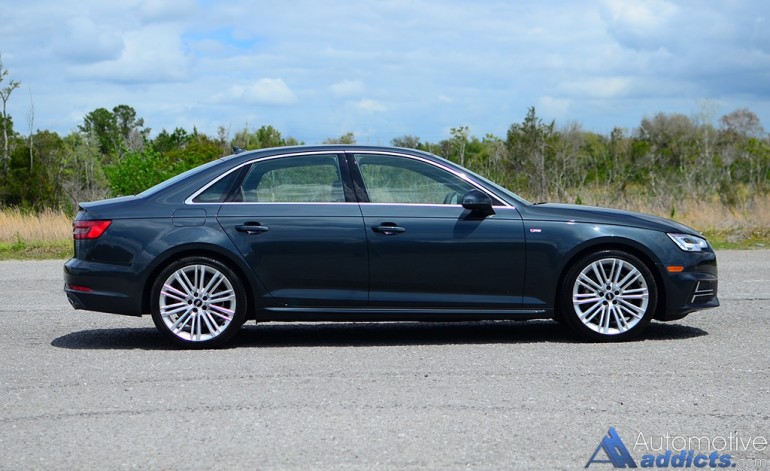 Audi has not only done their homework when it comes to the improved driving dynamics of the new A4, but the retuned drivetrain makes for a livelier handling vehicle that doesn’t compromise on comfort. In my drive of the new A4 up the interstate to several neighboring cities, my takeaway was that the new 2017 A4 exhibits better suited handling and ride comfort over its predecessor. The new A4 was more assured in its approach at just about every legal speed. The optional sport suspension on my test vehicle was never too harsh while it provided a slightly lower ride height over the standard setup with optional 19-inch alloy wheels at all four corners adding to its overall road-hugging abilities. The steering was also agreeable with a tad of feedback and just enough effort in the dynamic mode, one of four drive select modes, including a custom-configurable Individual mode. 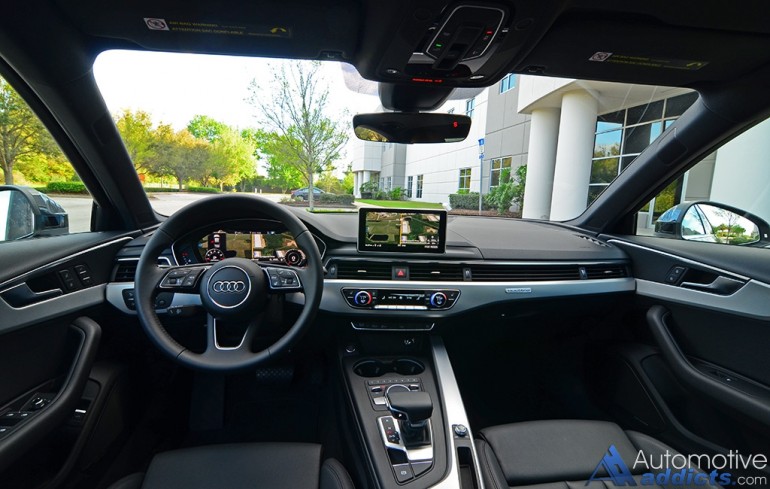 The new cabin of the A4 is customary to the latest design language from Audi, which includes the remarkable Virtual Cockpit that can be set to have a Google-maps-powered navigation display make up most of the dash cluster area. The use of a high-resolution 12.3-inch LCD screen and satellite view of Google Maps goes a long way in creating the perfect virtual display that’s always in proximity to your road-level eyesight. Use of the steering wheel controls for the screen is undoubtedly an acquired taste for most that may require a slight learning curve to become familiar with the full operation of the system. Additionally, the Audi MMI infotainment system fed through an 8.3-inch high-mounted center LCD screen that seems to “pop” out of the dashboard requires a good amount of time to become acclimated to its operation and menu sets. I will say, after spending a good 30 minutes to an hour with the system, it becomes more useful as there are many hidden feature sets and configurable options that make it more user-friendly. The intelligent integration of a handwriting and scrolling touchpad on the center turn dial for the MMI infotainment system is one of the many redundant ways of entering text or GPS navigation destinations. 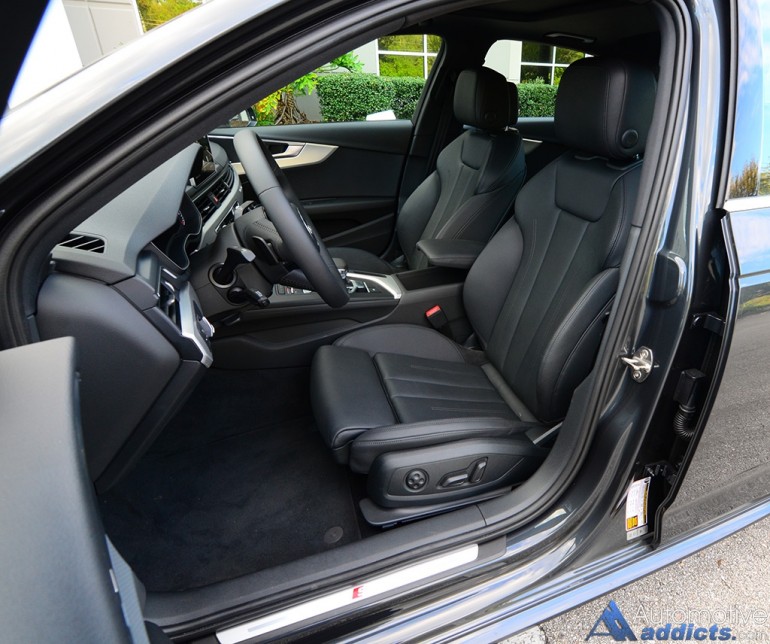 The interior of the new 2017 Audi A4 is forward thinking and makes wise use of premium materials leaving soft-touch surfaces throughout the dashboard and door trim. The judicious use of textured aluminum trim and minimal hard plastics with grained grooves, all comes together for a premium and overall luxurious feel. The Manhattan Grey leather seats provide the right amount of support and prove to be comfy on long trips through sensible use of the 4-way lumbar adjustments for both the driver’s and passenger’s side. The 8-way power adjustments and seat heating is made possible from my A4 test vehicles Premium Plus package, as well as rear outboard heated seats. The new A4 also features an automatic 3-zone climate control system, as part of the Premium Plus package, with nifty touch-status toggle buttons up front to keep things simple and the button count down. 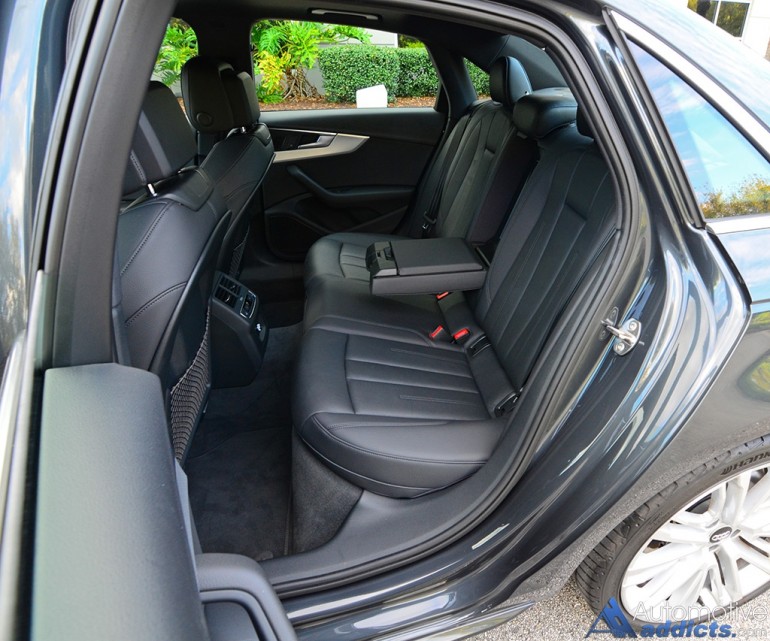 With the overall dimensions of the A4 growing, interior space naturally gets larger with ample room up front for the driver and front passenger by way of the highly adjustable front seats. Out back, the rear seating makes just enough space for adults slightly over 6-feet tall. Cargo room is vast; at 13 cubic feet with the rear 60/40 split seatbacks up. The interior ambient LED lighting, as well as the exterior LED headlights and taillights, are all conformed to what you expect in an Audi, bright and stylish. The rear LED taillights will even perform a directional flow when the turn signals are used. The fading acts of the daytime running lights up front have their own unique character as well. 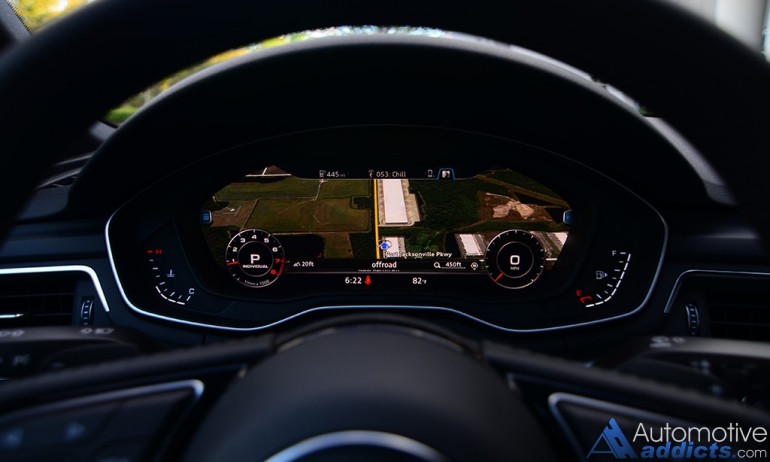 The pricing of the new 2017 Audi A4 remains at a somewhat civilized level starting at $37,300 before any fees for the base A4 front-wheel-drive sedan. Moving up to my Premium Plus package and Quattro all-wheel-drive-equipped A4 test vehicle, expect to pay just over $40K. My nearly-loaded-up 2017 A4 test vehicle, including the Premium Plus package, Technology package, 19-inch wheel package, Cold weather package, and Sport package, has as-tested price of $50,025 including a $950 destination charge.