Why a Subaru Is Fun and Safe to Drive 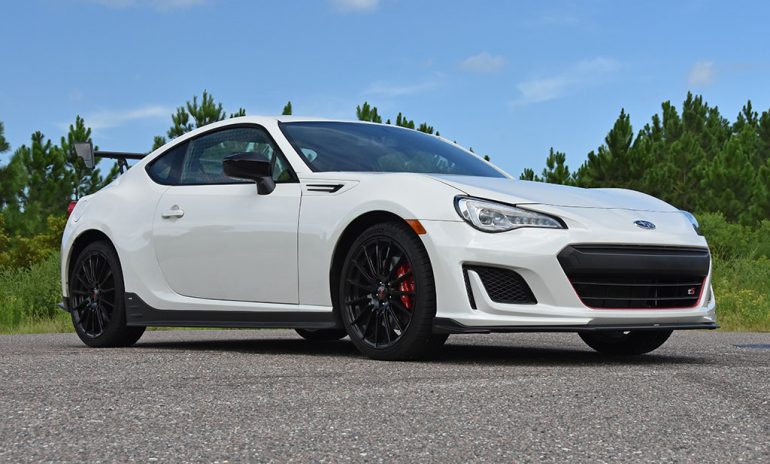 In a market where uniformity reigns supreme, a brand like Subaru attracts attention. To survive as one of the world’s smallest manufacturers, you have to do things right and in an original way. Because of this, the Japanese brand has maintained its identity but has also adapted to the times.

The racing successes and unique qualities of the more radical versions have made the Subaru WRX STi the most visible image of the brand, a car with top-notch performance, capable of putting super sports models on the ropes when grip conditions are not ideal.

But, in addition to this highly specialized machine, Subaru has in its catalog models with a much more practical approach to everyday life, with a good interior space, a large trunk and excellent manufacturing quality, but which do not give up on bringing a smile to their driver’s face on every trip, such as the Subaru Levorg, a model whose name is a play on syllables from LEgazy reVOlution touRing, because a practical car does not have to be fun, nor does a fun car have to give up on being safe and easy to drive.

With the arrival of the latest generation of the Subaru Outback, the Japanese brand introduced the Eyesight system. This is a device that allows its models to accurately measure the distance to the vehicle in front, avoid possible rear-end impacts (typical of city driving where we hit the vehicle in front because of a misdirection) and alert us to other possible dangers.

As I say, this is not the only device of this type on the market, but, as with its all-wheel-drive or its boxer engines, Subaru has followed a different path to the same end, and it is fair to say that it has achieved the most effective results in numerous comparative tests, reacting earlier and in less favorable conditions.

This device is primarily based on the artificial vision provided by two stereoscopic cameras that behave in a similar way to our eyes. In order for us to see in 3 dimensions, we need both eyes, which are separated so that each one sees things with a small gap to the other and our brain builds a 3D image from them. That’s what’s known as stereoscopy.

If you don’t believe it, try the following test: cover one eye and try to take an object you have on the table. For the first few minutes, you’ll be able to pick it up because your brain still remembers the distance it had calculated when you saw it with both eyes. After a few minutes, however, you will see in two dimensions and will not be able to calculate the distance between two objects on the table. 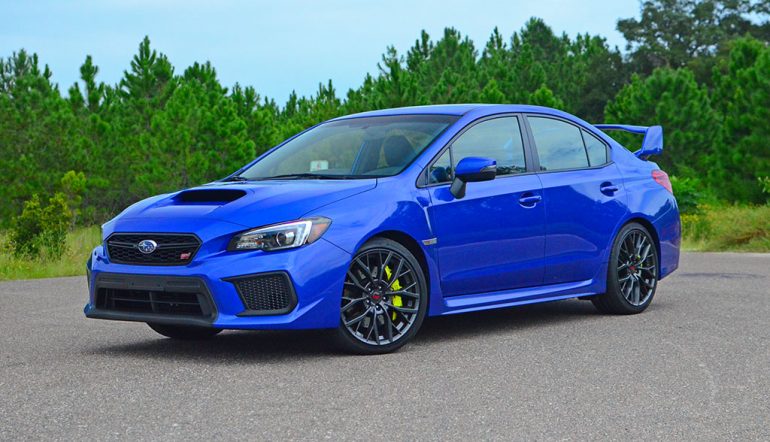 With the help of these two extra eyes, which don’t blink, get tired or stare at the woman’s secret poster at the bus stop, the Subaru offers an important safety system. There is one type of accident that normally does not have serious consequences because it happens at low speed, but it is very frequent and frightening. It happens in situations like the one explained below.

In this scenario, Subaru’s Eyesight system would activate our car’s brakes and prevent the accident, as long as our speed is below 50 km/h. If our speed is higher and you are not able to bring the vehicle to a complete stop before impacting it, you would reduce your speed significantly. In other words, even if you were not able to prevent the accident, you would reduce its consequences dramatically.

Keeping a safe distance or avoiding collisions in the city are not the only advantages of the Eyesight that will make everyday life safer and easier. Take a look at this video and you’ll see all that these two extra eyes do in the Subaru, such as keeping you out of your lane by misdirection.

What users are saying about the Subaru Eyesight

When Subaru introduced the Eyesight system, it conducted a series of tests with international drivers and the response was unanimous about its effectiveness. The tests monitored the testers’ constants to see how their bodies reacted to different situations, especially their heartbeats. So that you can see their reactions and their comments on the effectiveness of this device, we leave you this video here

What are the advantages of Subaru’s boxer motors?

A tall, narrow object does not have to be more unstable than a wider, shorter one. The stability of a body depends more on the height of its centre of gravity than on the height of the object itself. To demonstrate this, I propose another game: take the broom and try to hold it upright on your index finger.

Although Subaru’s are slightly taller than other rivals – making them more comfortable to get in and out of and offers more interior space – their center of mass is lower than most cars on the market. The result of this is that they swing much less in the corners without the need to resort to hard suspension like boards. In other words, they are much more stable without sacrificing comfort.

Why do Subaru’s have a lower center of gravity than most? The answer is very simple, but it has a technical complexity: its boxer engines. The heaviest part of a car is its mechanics. If you look at the image at the top of this section, you’ll see a section of a Subaru’s boxer engine. If you look, all the parts are aligned with the rotating round part (the crankshaft pulley), in the same horizontal plane.

In other words, this engine’s center of gravity is as low as its own crankshaft, which is practically the lowest part of an engine. In V-type or in-line engines, the pistons do not move horizontally but rise and fall, which raises the engine’s centre of gravity. 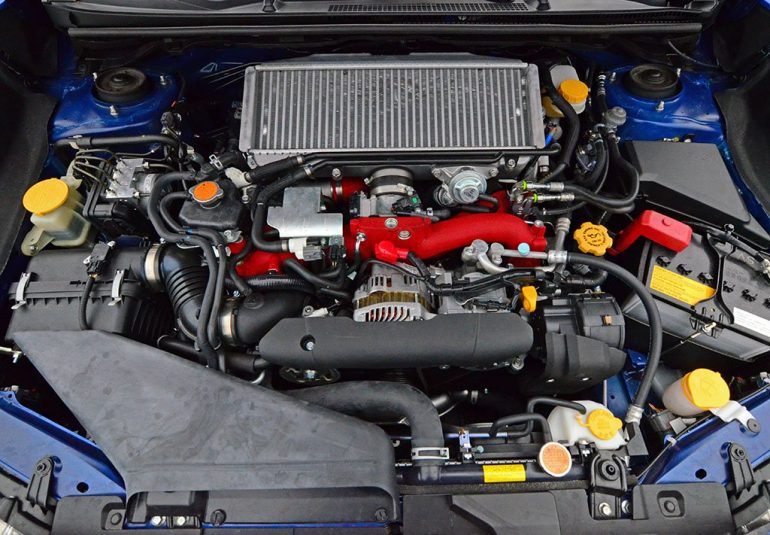 If a boxer engine has this important advantage, why don’t all brands make engines with this architecture? The reason is the technical complexity I referred to earlier. A boxer engine is much more expensive to manufacture, because it is practically two engines placed horizontally and joined by their housings.

In addition, a boxer engine takes up space across the width, so it is difficult to place it in a forward transverse position. For this reason, they can only be placed longitudinally and this makes them hang in front of the front axle, which is not good for weight distribution. To solve this, Subaru is once again turning to an effective solution without scarring: permanent all-wheel drive.

Here too, Subaru goes off the beaten track for most brands. Almost all four-wheel drive models on the market use Haldex-type systems. In these systems, the car actually functions as a single-axle drive vehicle, unless it detects a loss of traction, in which case it begins to distribute power to all four wheels.

Subaru models – with the exception of the Subaru BRZ, which is a rear-wheel drive sports car – always distribute engine power between both axles, both when accelerating and when retaining. This is one of the most efficient systems on the market, and it gives Subaru’s a head start on rivals when conditions are less than ideal.

The combination of a low center of gravity and such an effective traction system means that models like the Subaru Forester and Subaru XV show exemplary road performance without sacrificing good ground clearance, allowing us to get off the road for outdoor sports or not get stuck in the snow so easily.

The Subaru of the future

Subaru is a faithful reflection of the culture of its country of origin. Japan is full of contrasts, where deep-rooted traditions live side by side with a passion for the latest technological advances. Likewise, Subaru maintains its essence, with boxer engines, four-wheel drive, quality engineering… but without refusing to evolve.

A good example of this are the concepts presented at numerous shows, such as the Subaru Advance Tourer Concept, the XV concept or the most recent one, the Subaru Viziv-7 presented in Los Angeles.

The quality of the construction, the effective and original solutions and the strong personality of the Subaru make it stand out from the rest of the brands. There is an infinite number of details in them, such as the anchors on the bottom of the rear doors to achieve the maximum solidity of the structure in the event of an impact, the exemplary dynamic behavior provided by its boxer engine and permanent total traction, the safety of systems such as the Eyesight… Everything in a Subaru is designed to be safe, effective and fun.

The first thing to make a trip enjoyable is to be able to do it, and Subaru cars do their best to make that happen, even if the weather conditions are against them.

Whether it’s because you’re caught off guard on a trip or because you like to enjoy sports in the snow, the efficiency of Subaru’s all-wheel-drive system and the balanced weight distribution of the mechanical components in these cars is always a guarantee for getting ahead.